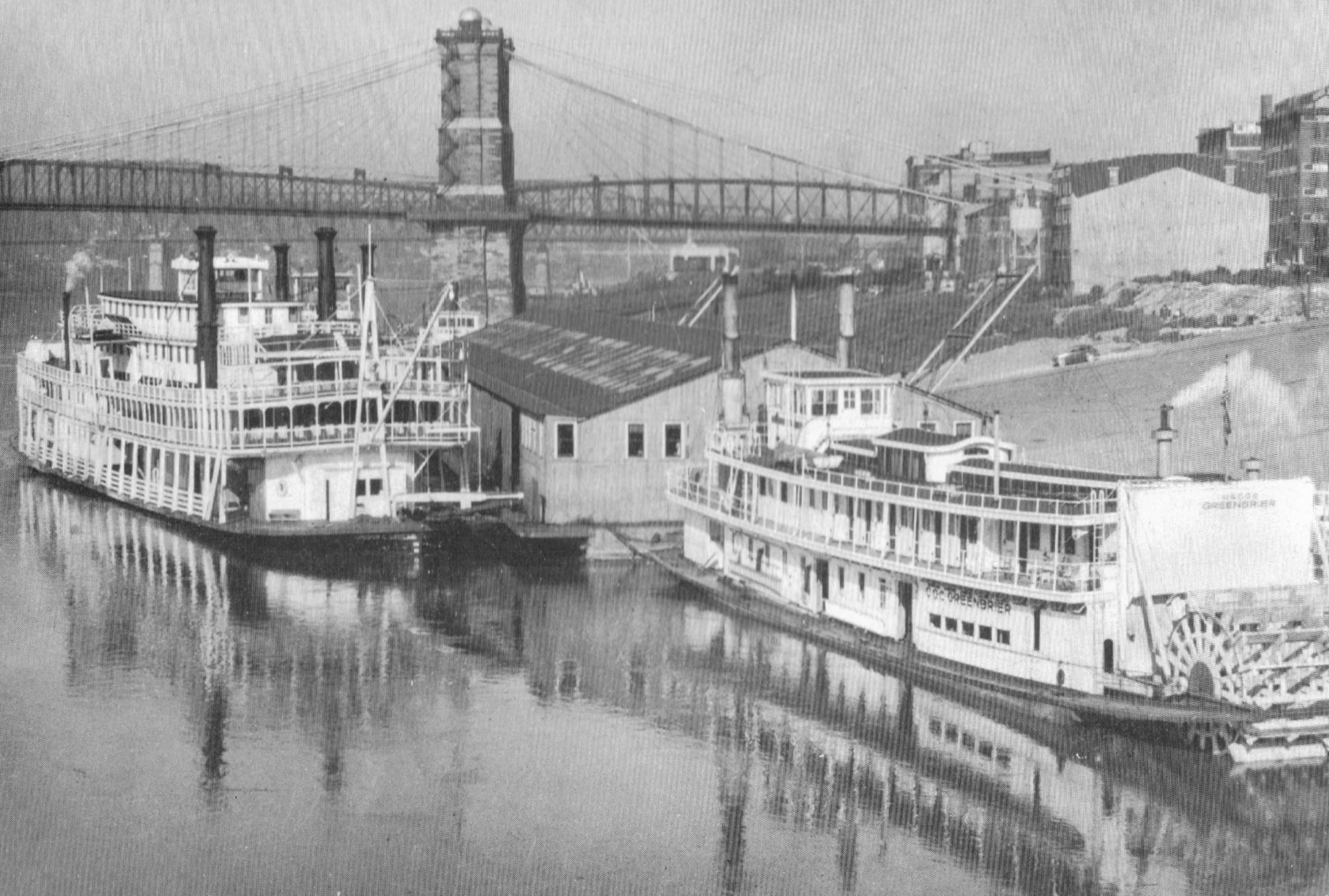 The Cincinnati Waterfront In 1941

This week’s Old Boat Column takes us for a visit to the Cincinnati wharf. In this serene image, taken from the stern of the excursion steamer Island Queen, we see, (from right to left) moored at the Greene Line Steamers wharfboat, the Greenbrier, Gordon C. Greene and barely visible, the Chris Greene and Cary-Bird.

The Greenbrier was built in 1924 at Charleston, W.Va., by the Charles Ward Engineering Works. Constructed on a steel hull that measured 164 feet in length by 32 feet in width, the sternwheeler was owned by the United States Lighthouse Service. The primary work of the vessel consisted of the servicing of government navigation lights along the Ohio River and its tributaries. Three boilers supplied steam to engines having 15-inch cylinders with a 7-foot stroke.

Capt. Leslie Hill was the first master of the steamboat; after retirement in 1938, Capt. Arthur “Red” Schletker assumed command. For many years, the boat carried a mascot dog named “Shawnee,” who had come aboard at Shawneetown, Ill., on Thanksgiving Day of 1936.

The riverboat’s moment of glory came in 1929, during the celebration of the canalization of the Ohio River, when it carried President Herbert Hoover from Cincinnati to Louisville; while it was passing Jeffersonville, Ind., the Howard Shipyard launched the new towboat Loretta Howard.

On July 1, 1939, the Greenbrier was transferred from Lighthouse to Coast Guard service. During War II, the vessel had an anti-aircraft gun mounted on the roof. The steamboat was decommissioned on September 1, 1947, and laid up at Paris, Tenn.

It was eventually sold to new owners at Stillwater, Minn., who resold the boat to the Charles G. Smith Company of Houston, Texas. The Greenbrier became a landing boat on the Intracoastal Canal.

Launched in 1923 for the Eagle Packet Company of St. Louis, the big sternwheeler Cape Girardeau was the last packet built by the Howard Shipyard at Jeffersonville. Constructed on a steel hull that was 210 feet in length and 38 feet in width, the vessel had three boilers provided that steam to engines recycled from the packet Ferd Herold. The boat was sold to Greene Line Steamers in the spring of 1935 and renamed Gordon C. Greene in tribute to the company’s late founder.

Capt. Tom Greene was master of the popular tourist steamer, and his famous mother, Capt. Mary Becker Greene, was usually aboard on all trips. Robert H. McCann was long in charge of the purser’s office.

The boat was retired in 1952 (replaced by the Delta Queen), to become a floating hotel (renamed Sarah Lee) at Portsmouth, Ohio. It was later sold for use as a restaurant at Owensboro, Ky., called The Sternwheeler. Again sold and renamed River Queen, the riverboat was taken to Bradenton, Fla., where it was a dismal failure as a tourist attraction. The next port for the boat was New Orleans where, again, it proved unsuccessful.

In 1961, the next owners took the boat to the Upper Mississippi River, mooring it opposite Hannibal, Mo. In 1964, the steamboat was moved to St. Louis, where, moored in the shadow of the Eads Bridge, the boat was well patronized and successful. The River Queen sank 51 years ago on December 2, 1967, and was a total loss.

Caption for photo: A steamboat sojourn on the Cincinnati waterfront in 1941.