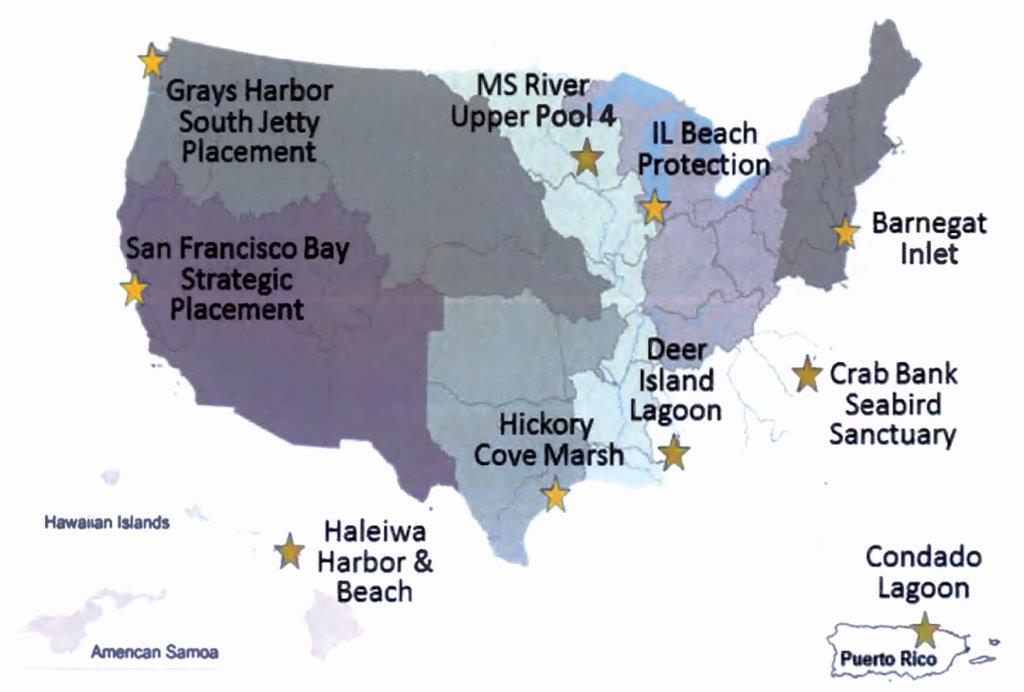 At the end of December 2018, the U.S. Army Corps of Engineers announced its selection of 10 pilot projects for the beneficial use of dredged material. The projects are part of the Water Resources Development Act (WRDA) of 2016, Section 1122, which required the Corps to establish the pilot program.

According to the legislation, project selection was based solely on the environmental, economic and social benefits; and diversity in project types and geographical locations. The legislation also exempts projects from federal standards that require dredged material placement selections to represent the least costly alternatives, as beneficial use often adds more cost to projects.

On February 9, 2018, a federal register notice issued a call for proposals, which were accepted through March 12, 2018. The Corps received 95 submissions.

“We didn’t really know what to expect,” said Joseph Wilson, environmental dredging program manager, U.S. Army Corps of Engineers Headquarters, Operations Division. “We never imagined we’d get 95.” He said the program would have probably generated more proposals with more time. Both the American Association of Port Authorities and the Dredging Contractors of America contacted the Corps and requested an extension for proposals, which the Corps ultimately declined because of the large response.

“The 95 [proposals] we had were very hard to evaluate,” Wilson said. The proposals represent 30 states and one U.S. territory.

Dredged sediment from a federal navigation channel will be used to restore a tidal wetland in San Francisco Bay, in part using tides and current to transport sediment to the marsh plain. The project will augment the sediment supply to mudflats, marshes and breached salt ponds. The shoreline stabilization is a first line of defense against tidal forces.

On the Island of Oahu, sediment from maintenance dredging at the Haleiwa Small Boat Harbor will be used for beach restoration to stabilize the seawall, enhance the eroding shoreline, prevent exposure of a sewage treatment facility, prevent erosion of terrestrial soils that affect water quality and harm coral and marine life, and enhance habitat for benthic and endangered sea turtles and Monk seals.

At Lake Michigan in Illinois, about 70,000 cubic yards of dredged material from the Waukegan Harbor federal channels will be placed at six sites. The project will protect 30 miles of shoreline and provide improved recreational access. The project will enhance  shoreline and dune habitat with sand placement, and vegetation plantings will provide habitat for several species of birds.

Dredged material from the Charleston Harbor Post-45 Deepening Project will be placed at the Crab Bank to restore and enhance 80 acres of island at a seabird sanctuary to support shore bird habitat. The material placement will be in a non-uniform pattern to allow for greater topographic variation and therefore greater habitat diversity. The project will provide habitat for several species, including brown pelican, black skimmer and royal tern. Additionally, Crab Bank serves to dissipate wave energy, thus protecting the salt marsh and essential fish habitat.

Dredged material from a portion of the Sabine- Neches Waterway will be placed to restore 1,200 acres of emergent marsh habitat in Sabine, Texas, at the Hickory Cove Marsh Restoration and Living Shoreline project. It will remove sediment left from Hurricane Harvey, which has not been removed due to lack of placement sites. The habitat is important to wintering migratory waterfowl and resident water birds along a 6-mile reach of the waterway at the intersection of the Neches and Sabine Rivers.

In Seattle, Washington, at Grays Harbor, dredged material from the federal navigation channel will be pumped ashore from a hopper dredge to restore the eroded beach and primary dune along the shoreline south. The shoreline placement will also help protect the south jetty. The restored beach will provide habitat for birds and aquatic species.

Dredged material from the Mississippi River Lower Pool 4 will be placed to create aquatic ecosystem habitat in Upper Pool 4, which is largely degraded from sediment deposition caused by material from the Minnesota River. The project also includes dredging of the Bay City federal harbor adjacent to the project area, which was previously not dredged due to a lack of a placement site. The project provides a unique and valuable riverine focus for beneficial use to restore bathymetric diversity to the area impacted by Corps locks and dams.

To evaluate proposals, the Corps formed regional teams and a national interdisciplinary evaluation board of subject matter experts (SMEs). The national board at Corps headquarters included economic and environmental experts, district representatives and those familiar with the Continuing Authorities Program (CAP), which authorizes beneficial use projects through Section 204 of the Water Resources Development Act of 1992. The board was entirely Corps employees “to avoid any perception of bias,” Wilson said, from outside interest groups. “We were very careful about following the legislation and implementation guidance,” he said.

The evaluation process also involved regional teams at local Corps districts. The submission period was limited, and Wilson said a lot of potential applicants didn’t get the notice in time. He said the Corps encouraged those that needed more time to submit something by the deadline. The proposals would then go back out into the field to the regional boards in eight Corps division offices, who could help add more substance to the proposals where needed. Regional teams reviewed the projects first and developed a list of eligible projects for further consideration by Corps headquarters.

The Corps implementation guidance, filed January 3, 2018, said existing Corps funds from headquarters were used for the identification and selection process. For each eligible project, the regional teams used available data and its analytical tools for preliminary analysis, estimating costs, environmental impacts, and economic, environmental and social benefits. The teams completed fact sheets for each eligible project, which were submitted to Corps headquarters for further consideration. The teams evaluated projects located in different geographic areas and that served the criteria from WRDA 2016, Section 1122: reduce storm damage to property and infrastructure; promote public safety; protect, restore and create aquatic ecosystem habitat; stabilize stream systems and enhance shorelines; promote recreation; support risk management adaptation strategies; and reduce the costs of dredging and dredged material placement, such as projects that use sediment for construction of fill material, civic improvement objectives or other innovative uses and placement alternatives that produce public economic or environmental benefits.

• maximizing the beneficial placement of dredged material from federal and nonfederal navigation channels;

• coordinating the mobilization of dredges and related equipment, including through the use of such efficiencies in contracting and environmental permitting as can be implemented under existing laws and regulations;

• implementing best practices to maximize the beneficial use of dredged sand and other sediments; and

• ensuring that the use of dredged material is consistent with all applicable environmental laws.

According to the Programmatic Environmental Assessment and Finding of No Significant Impact (EA/FONSI) for the selection of recommended projects, published December 2018, nearly all of the proposals submitted for the pilot program were determined by the regional teams to be eligible based on the language of the legislation. To reach a recommendation, the national evaluation board compared the proposals for each project and the checklists and fact sheets created by the regional teams to the is secured for the first round of projects requirements of the legislation in a two-step process, the “First Sort and Second Sort.”

In the First Sort, the team compared proposals against the criteria in the legislation to choose a subset for consideration. Proposals were scored using a set of scoring definitions to assess how well the proposal met each consideration. Proposals were scored independently by five evaluators, and the highest scoring proposals were identified and compared. “There was considerable congruence within the approximate top third of each evaluator’s scores,” the EA/FONSI document said.

While the legislation required the selection of projects be based on their environmental, economic and social benefits, and required geographic diversity, it was not possible to develop a scoring method for these measures. Instead, the SMEs with specific experience evaluating projects assigned impact ratings in each of the three areas.

Ten projects were “determined to have a high likelihood of delivering on the environmental, economic and social benefits described in the proposals and exhibit geographic diversity, with projects along the Atlantic, Gulf and Pacific Coasts, Great Lakes and Upper Mississippi
River, and projects in Hawaii and Puerto Rico,” according to the EA/FONSI.

FUNDING AND AUTHORIZATION
For the future of these projects, “As it looks right now, funding is the biggest issue,” Wilson said. The projects have not received Congressional
authorization yet. Wilson said they will likely seek appropriations under the CAP, Section 204. A few of the projects are already in the CAP program. “We have some guidance on how to implement the recommendations, how to evaluate the proposals and how to put them into the cue for CAP funding,” Wilson said.

WRDA 2018 authorizes ten more projects for the program. For now, Wilson said the Corps has put that
implementation guidance on hold, until funding
is secured for the first round of projects.