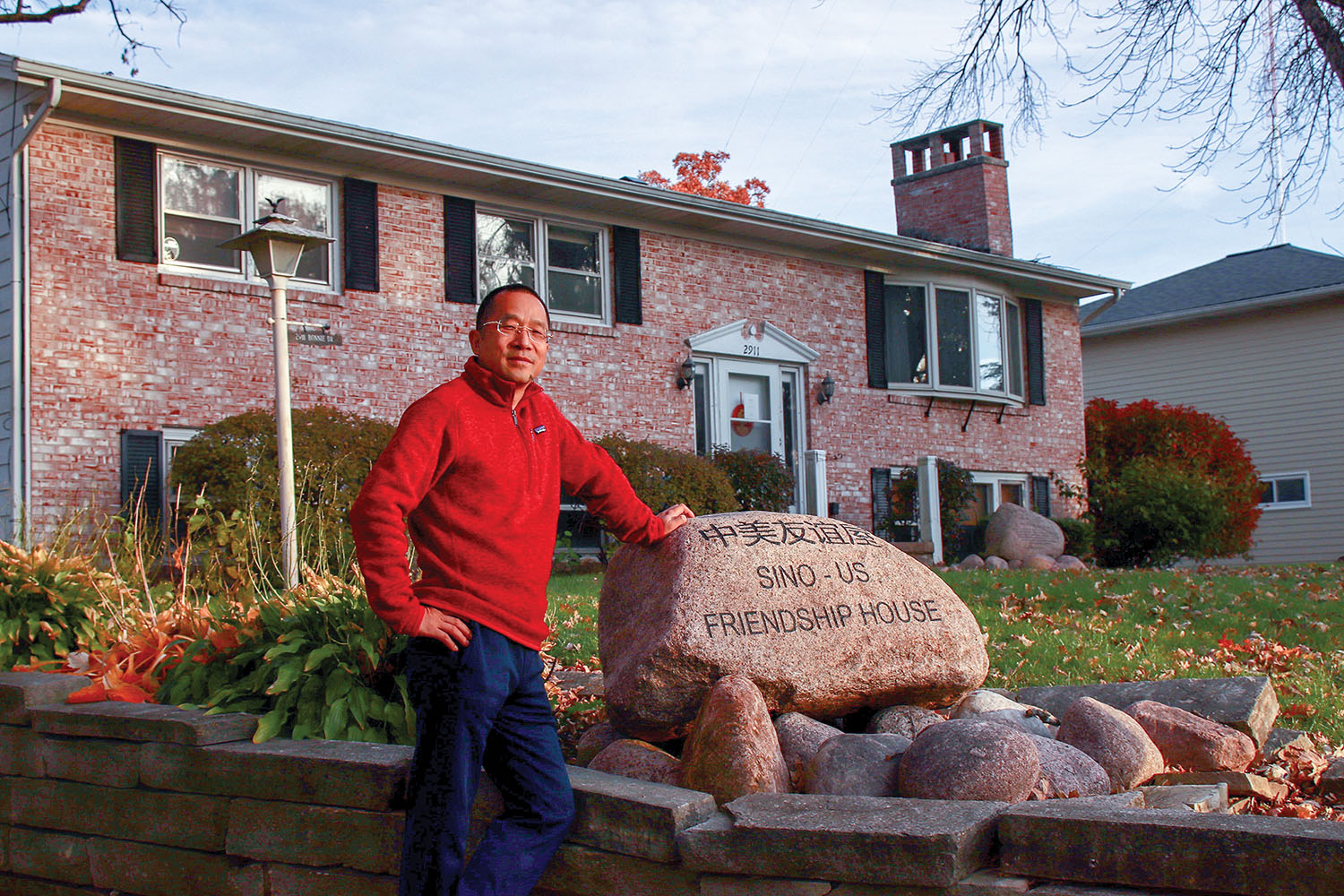 From a swank $40 million riverfront hotel and convention center built with the help of a Chinese investor, to expense-paid camps in China for students, to Chinese interest in a proposed international river port that could extend containerized barge shipping to the Upper Mississippi River, Muscatine, Iowa, is capitalizing on a connection that began in 1985 when Xi and four associates experienced a massive dose of “Iowa Nice” on an agriculture study mission.

On a return visit in 2012, a few months before his elevation to China’s top job, then Vice President Xi brought warm greetings to the group’s hosts. “Old friends,” he called them. At a reception in Sarah and Roger Lande’s historic home overlooking the Mississippi, he greeted many of the residents who 28 years earlier had put up his group in spare bedrooms, fed them potluck dinners and cruised them around the river.

His first impression of the U.S. came from them, Xi told Iowans. “To me, you are America.”

“We welcomed them as one of us. It seems to have made quite an impression,” says Lande, who led the original welcoming effort, headed Iowa’s Sister-State relationship with China’s Hebei province for 10 years and has made several trips to China.

In “Old Friends,” a book documenting her experiences, she writes that the full impact of Iowa hospitality on the Hebei Shijiazhuang Prefecture Corn Processing Delegation is just starting to be realized.

That impact is most visible downtown, where Glad Cheng, a Chinese real estate developer, has invested in several properties, including the new Merrill Hotel & Conference Center overlooking the river and a former furniture store building next to the Muscatine Button Museum that he’s turning into a Sino-American Friendship Center.

Plans for the $40 million hotel languished until Glad stepped up to take a 10 percent stake. Without his involvement, it would not have been built, says Dan Stein, Central Bancshares chair and president of the Muscatine-China Initiatives Committee, a group who members were involved in hosting Xi’s 1985 and 2012 visits.

Local investors, led by members of the Howe family, own the majority of the 122-room hotel. Maxwell’s Restaurant in the grand lobby is named for Maxwell Stanley, former chairman and CEO of HON Industries, and mentor to the late Stan Howe, who worked alongside him for 36 years and succeeded him at the Muscatine-based manufacturer of office furniture.

Since his arrival in 2013, Glad has also bought a local travel agency, housed in his downtown building, the former John and Eleanor Dvorchak home where Xi stayed in 1985, and a home near the Landes, south of downtown.

He’s working to attract tourists, especially visiting Chinese, to see the home where President Xi slept. Now called the Friendship House, the split-level, brick-front home is managed by the city and still looks much like it did in the 1980s. Some 50 groups visited in 2018.

“The more Chinese that come here, the more opportunity. You never know what will fall out of this,” said Stein. “It doesn’t hurt that Iowa’s former governor, Terry Branstad, now serves as U.S. Ambassador in Beijing.”

An initiative by a major Muscatine industry, Kent Corporation, to create an international river port could be a game-changer. Getting ocean shippers to use river transportation would not be easy, but “if we can do things in a combination of rail, river and intermodal park, it could start there,” said Tony Joseph, who runs Joseph International, an overseas shipping company and former president of the Muscatine-China Initiatives Committee.

COSCO, a state-owned Chinese shipping container manufacturer, has expressed interest in the project, which would be the only containerized barge handling facility on the river north of St. Louis, said Rich Dwyer, Kent Corporation’s senior vice president for corporate affairs and enterprise risk management.

A grant-funded study, completed in May 2017 by Omaha-based HDR Engineering, deems the $40 million project feasible, but “It’s not something that’s going to happen overnight,” said Dwyer.

Kent Feeds is considering building the port as a venture that would serve regional clients in an area stretching from Chicago to Des Moines and up and down the river, rather than trying to structure it as a quasi-governmental port authority relying on taxpayer funds.

“We’re still working on tying down anchor clients,” Dwyer said. “We’re not going to build it full board at once.”

The facility would allow outbound freight to be brought by truck, rail or barge to be containerized and shipped to New Orleans for transfer to ocean-going vessels, or brought upriver in containers to be transferred to trucks or trains. It would compete with rail and truck companies that move export-bound freight to coastal ports.

There many variables for shippers to consider, including closure of the river during winter months and the need to maintain just-in-time inventories, so it could take some time to recruit major clients who would find containerized river shipping cost-effective, Dwyer said.

Beyond Business: Focusing On Friendship, Understanding

In spring 2012, a group of Muscatine “old friends” toured China as Xi’s guests. At a dinner, their powerful host urged them to foster exchanges in sports, education, government, culture and business. Chances for peace and prosperity will improve “if our people get to know, understand and trust each other,” Xi told them.

When Xi speaks, Chinese people the world over take notice. “Everybody wants to please the leader,” says Lande. Educational and cultural exchanges have blossomed since 2012.

A touring Chinese musical group gives a Chinese New Year concert in Muscatine each winter. The musicians “consider Muscatine a home away from home” and look forward to their stays with local families, said Liu Jun, deputy consul general at China’s consulate in Chicago.

As you might expect, there are some detractors. Mayor Diana Broderson hears concerns about Chinese investors from people in the community. “You have folks with a positive reaction to progress and you have people who are not always on board. I think that’s typical,” she said. “As long as we keep working toward a positive result for Muscatine, I think it’s a win for everyone.”

“There’s got to be some positives and negatives. I don’t think the negatives have presented any adversities,” said Bob Miller, a resident petitioning the city not to change its tagline from “Pearl of the Mississippi” to “Where the river takes a turn for the better.” As to current U.S.-China tensions, “It’s not up to us in Muscatine to work out those differences that President Trump is working on,” he said in a phone interview.

Muscatinians like Lande say Chinese are quite similar to Americans when you get to know them. “China’s people want the same things we do—for their families to be well and for their kids to do better than they have. These things only come out when you’re having dinner, tea or coffee, not at formal events,” said Joseph.

Lande calls her people-to-people approach to international relations “kitchen-table diplomacy.” The opportunities that have grown out of it, like the trips to China for young people, give her hope for more cooperative relations between nations. “It totally opened up their eyes to the world,” she said. “That will make a peaceful world that can thrive.”

Caption for top photo: Chinese investor Glad Cheng stands in front of the former private residence where Chinese President Xi stayed in 1985. The home attracts some Chinese tourists to Muscatine and is managed by the city, but Glad pays the taxes and maintenance. (Photo by Emery Styron)