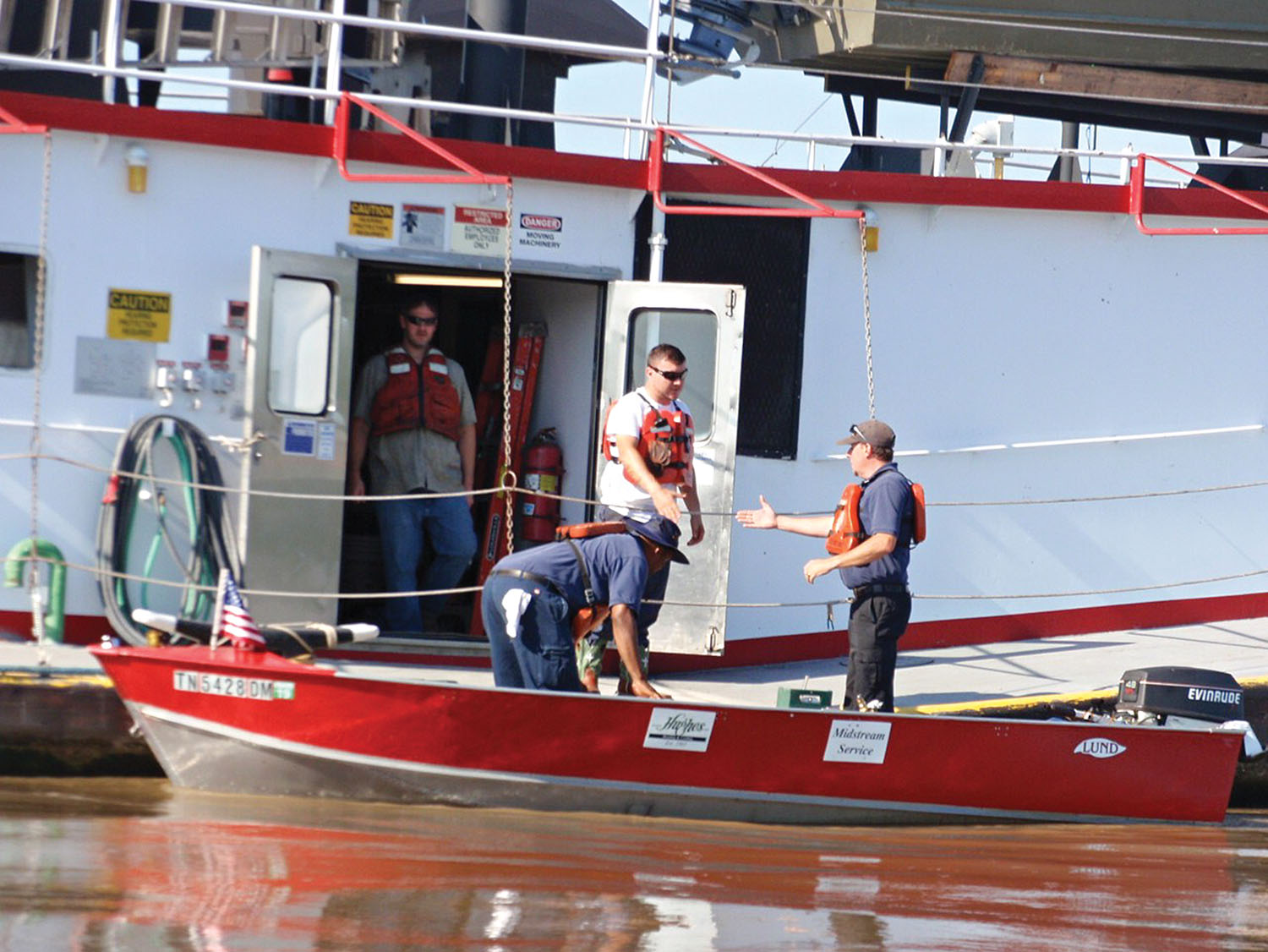 Hughes Heating & Cooling, based in Memphis, Tenn., is in a sweet spot for a business. While it is not the only company that offers passing towboats onboard service for their HVAC units and needs, “As far as I know, we’re the only one with our own service boat,” said company president W. Ralph Hughes.

“We had a former employee who worked here who’s retired now; he had worked on towboats, and he’s the one who introduced us to the idea that here was a market we could service,” Hughes told The Waterways Journal. The service boat was Hughes’ idea.

At first, Hughes employees would be delivered to passing towboats via a boat that Hughes himself used for duck hunting. “There was a team of our guys on board a boat, and it was going to be four hours before they could get off, so I just used my duck hunting boat.”

But Hughes eventually realized that the delivery boat would have to include all the equipment and parts the team might need, including spare motors, refrigerants and parts. “We retired the duck boat and bought a brand-new boat this winter,” he said. “We realized we could reduce the time spent on a ‘boat call’ if we used a service boat stocked with the same tools and parts we carry on our service trucks. The travel time using our service boat is similar to that on land, saving money for the customer.”

The new boat, built by Lund Boats, is 18 feet long and has room for all the supplies and equipment his teams might need. “It’s very rare that we don’t have everything we need,” said Hughes. The boat itself has a spare motor and is U.S. Coast Guard “flotation-compliant,” meaning it will remain afloat even with holes in it. It uses a tiller rather than a steering panel to steer, to leave more room for equipment. “Wildlife guides use a lot of these boats up north because they have so much room for gear,” said Hughes.

The service boat can be towed by truck to the nearest boat ramp. The company operates within a 200-mile radius, from Cairo, Ill, to Vicksburg, Miss. The service boat can be tied onto the towboat or barge while the team does its work, meaning the towboat does not have to stop. “Usually we tie up to the boat, unless it has to do flanking maneuvers; then they ask us to tie up to a barge, to avoid the prop wash,” said Hughes. The boat itself has a 100-mile range on the water.

Besides air conditioning and heating units, Hughes services stoves and kitchen refrigerators, freezers and ice-makers. Most service calls don’t last more than a few hours. “The evacuation process takes the longest,” said Hughes, meaning the cleaning out of systems. “That could take up to an hour and a half.” Most HVAC equipment nowadays is air-cooled rather than water-cooled as in the past.

The company was started in 1905 as Hughes Heating Company by Hughes’ great-grandfather, Walter J. Hughes. In those days, the work consisted of installing steam boilers and radiators in private homes.

Hughes father, Walter R. Hughes, returned from World War II in 1945 and moved the company into the heating and air conditioning work on some of Memphis’ largest buildings.

Ralph Hughes began work for the company as a boy in 1957, cleaning out boilers. “I was the only one small enough to get through the burner hole in front,” he said. He became full-time after graduating from college with a business degree.

To Hughes, the service his company performs is critically related to boat safety. “The main cause of accidents on the rivers is fatigue,” he said. “When crews can’t sleep right because their AC or heating system isn’t right, they can’t function right.” The wheelhouse is especially critical, he said. “When the captain’s too hot or too cold, everyone is!”

Caption for photo: Hughes workers arrive at a towboat for a service call. (Photo courtesy of Hughes Heating & Cooling)