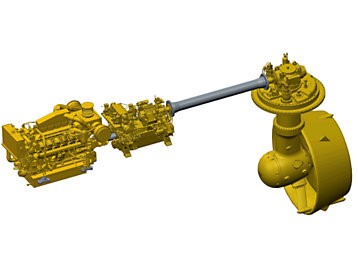 Caterpillar Marine has introduced the Advanced Variable Drive (AVD™), a fully-integrated hydro-mechanical propulsion system that can be customized for any engine application large or small, including dredges, auxiliary vessels and river towboats.

The AVD incorporates a planetary gear set that allows seamless clutch engagement of main engines, auxiliary engines, or both to provide a scalable power installation fitted to the customer’s requirements for maximum power, vessel speed or bollard pull.

“A cutter suction dredge is an ideal application for the system,” said Nathan Kelly of Cat Marine, technical leader of the AVD development team. For high load, cyclical applications with either a standard or multi-speed gearbox, the AVD could be a drop-in to increase efficiency, he said.

Power is generally installed to satisfy one of a number of applications and operates at a less than optimal load factor much of the time. The AVD system uses smaller engines that collectively produce the maximum power required and operate individually at high load factors when full power is not required.

A river tow running downriver on a straightaway can use an auxiliary engine that provides sufficient power for that activity. When encountering a bend or obstacle that requires more power, the hydrostatic system can instantly engage the main engine to produce more power or can reduce speed or even reverse without clutching in or out. The operator simply moves the throttle to increase or decrease power and speed.

The concept is applicable to cutter dredges, which have cyclical load applications in cutter, pump and winch operations.

Caterpillar Marine has partnered with Sanmar Shipyards in Istanbul, Turkey, to integrate the AVD into one of the company’s new tugboats.. The compact harbor tug design includes 70 tonnes of bollard pull and firefighting (Fi-Fi) Level 1 capability.

Kelly is working with Sanmar to install the AVD system. All equipment, including the thruster and gear works, were delivered to Istanbul by the first week of December, he said, in preparation for building the vessel in 2019.

One of the most important features of the AVD is scalable power, he said. With the system, the installed power can be matched exactly to what is needed. The performance and response come from the hydrostatic system, he said.

The Sanmar AVD tug will be the first hydraulic hybrid vessel of its kind – providing the same benefits as a variable speed Diesel-Electric Propulsion (DEP) system at a fraction of the size and cost. Considering the perceived benefits of DEP systems, this is a tremendous accomplishment in terms of vessel design, Kelly stated.

The combined annual fuel use of the 3512Cs and C32 engines will be ~90,387 gallons, opposed to ~108,228 if 3516s were used. Based on historic usage rates and new engine design, the anticipated fuel efficiency and carbon dioxide emission savings are estimated at 400,000 pounds of carbon per year. This is based on an estimate of 22.4 pounds of carbon dioxide emissions per gallon of diesel fuel.

The ability to run with the main engines off reduces wear and tear and therefore service and maintenance costs over the life of the engines and their components. AVD motors and components are smaller and less expensive than battery-electric hybrid systems.

When fully integrated into vessel design, the propeller speed can operate independently of engine speed, and optimal engine efficiency can be achieved, even with a fixed propeller. For the Sanmar AVD tug, this savings is estimated at 15 percent to 20 percent.

The ability of the system to rely mostly on its auxiliary engine dramatically reduces owning and operating costs and extends engine and component life well beyond what is currently practiced.

The AVD reduces maintenance costs and has conventional service requirements. It can be scaled to meet the requirements of a wide range of vessel types, applications and power levels and enables effective downsizing of engines without the loss of performance.

Electric motors can be used instead of hydraulics if required. AVD enables straightforward integration of diesel, natural gas or gas turbine engines or any combination of these as prime movers, accommodating various levels of engine load acceptance capability and engine speed regimes.

As a result, main engines can be downsized in most applications, with supplemental power provided by auxiliary engines. The system provides high levels of propulsion redundancy and is scalable to meet the requirements of a wide range of vessel types, application and power levels.

The AVD technology was first developed by Caterpillar as the Dual Path Variator for use in the mining industry and was introduced in 2012 on the Cat 966XE medium wheel loader. AVD is the marine propulsion designation for this technology.

To introduce the technology to the marine industry, Kelly delivered a technical presentation on the AVD at the 2018 Asia Pacific Maritime (APM) conference in Singapore. Engineering manager Igor Strashny presented on the AVD at the Electric and Hybrid Marine World Expo in Florida, and Jim Mundth, Territory Sales Manager for Caterpillar Marine described the system during a panel discussion at the Western Dredging Association (WEDA) 2018 Dredging Summit and Expo in Norfolk, Virginia.