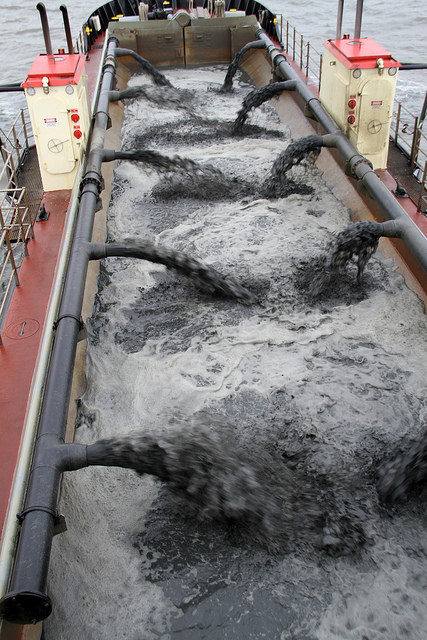 Labor and equipment assets, along with support work such as surveys, engineering and design, was solely provided by the Corps for the duration of the project. This was an unusual arrangement as the Corps generally contracts out the work and shares in the cost. However, the City of Suffolk fully funded the project and asked the Corps to do the work as the most efficient and cost-effective solution. Michael Anderson, chief of design section in operations branch, Norfolk District, said this type of arrangement is happening more and more for shallow draft projects that don’t often get put into the federal budget. “When funds aren’t appropriated and the local sponsor still wants to move forward, they can contribute the money for the federal work,” Anderson said.

The month-long project removed shoaling in the Bennett’s Creek Channel. Approximately 15,000 cubic yards was removed to bring the creek to a depth of six feet. The Corps used its special purpose shallow-draft hopper dredge Murden, on loan from the Wilmington District. The 156-foot vessel has a draft of 3-feet, 10 inches in the bow and 4 feet 3 inches in the stern.

Material was placed at the Craney Island Dredged Material Management Area in the rehandling basin. Craney Island is located near the mouth of the Elizabeth River adjacent to Portsmouth, Virginia.

“The basin is a deep-water area next to Craney Island where folks using hopper dredges or scows, for small projects, can bottom place the material. Every three to four years that area is dredged and the material is pumped upland onto the island,” Anderson said.