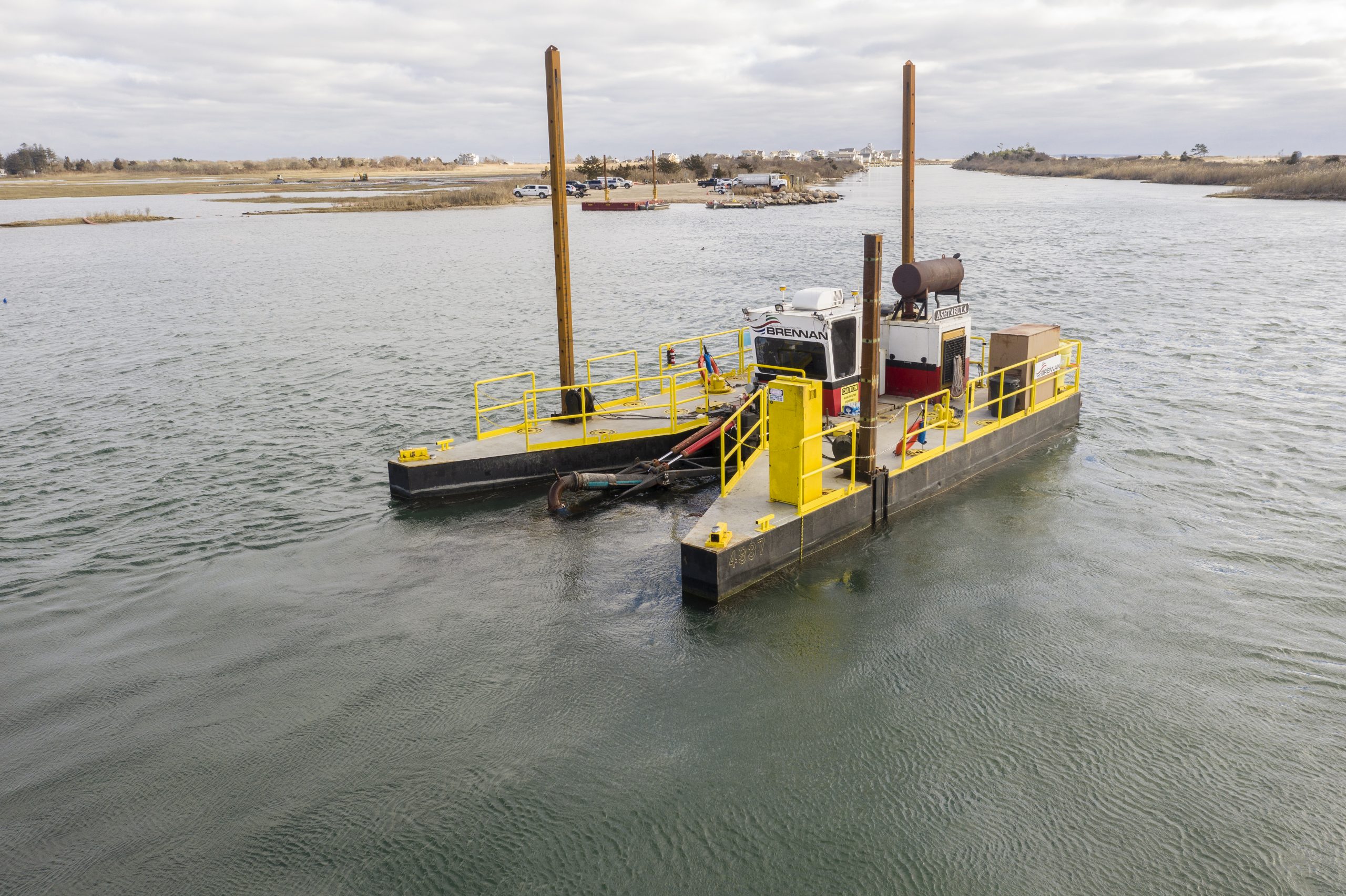 The Rhode Island Coastal Resources Management Council (CRMC) kicked off a salt marsh restoration and elevation enhancement project at Quonochotaug Pond in Rhode Island, where dredging removed sand from the bottom of the pond and is being used to restore and enhance the adjacent marshland as well as create a public beach. The dredging was completed in late January, after which a volunteer planting effort will begin.
The naturally formed pond and marsh area acts as a first line of defense to protect adjacent communities from flooding. Over the years as sea levels have risen and erosion has occurred, the marshes have become overrun with water turning marsh into open water and killing off the vegetation that helps hold the sand in place.

Dredging and Restoration Activities
J.F. Brennan Company Inc. removed approximately 70,000 cubic yards of sand to restore and elevate 30 acres of degraded salt marsh.
The contractor mobilized on-site at the end of November. The company used two 8-inch hydraulic dredges, the Astabula and the Fox River. The dredges were custom made by DSC to have different pump and ladder configurations and sensors for dredge cut accuracy. Each is equipped with Hypack RTK GPS software, which can adjust to water level changes ensuring the excavation is done precisely. The dredges are also working at a reduced discharge rate of 2000 GPM to allow the material placed to settle faster.

“One of the challenges is to develop the proper final elevation of the marsh. We have to work closely with the owner to bring material on the marsh at a higher elevation to allow the marsh to settle. There’s peat under these marshes that can compact. It’s critical to have the correct grades set to allow for settling and the finished grade,” said Andrew Timmis, business development director for J.F. Brennan.

Upland, Brennan is using a CAT 324E amphibious excavator with an MBI amphibious undercarriage. The excavator placed the dredge pipes at the marsh in the required location, and then, moved the dredged material from the pipe discharge to the edge of the marsh. Once there was enough material on the marsh, an LGP dozer accessed the work area to start grading and shaping the material to produce the final approved elevations.

“The bid mandated we use amphibious excavators to ensure no damage or compaction of the marsh would occur. The tracks are about 6 feet across and 5 feet high so the excavator has a ground pressure of 1.5 psi and can float. We’re using a low ground pressure dozier with Trimble grading software, so we can set grades on the dozier to produce really accurate contours and elevations. They don’t want high or low

spots. It has to be just right,” Timmis said.

The dredged material is being pumped through pipes of varying distances, from about 500 feet to close to 2,000 feet.

“The discharge lines are moved daily to move the material around to the different marshes to help spread the material,” Timmis said.
The dredging was completed in late January with dredges running 24/7 to prevent freezing in the pipes or equipment, and to finish before the fish spawning season.

The project covers about 36 acres, and the dredging was broken into two parts. An eight-foot channel was dredged in the Quonochontaug Breachway to allow for better navigation and also for better water exchange between the pond, breachway and Atlantic Ocean. The breachway had not been dredged since it was constructed in 1904.

The second part of the dredging was in an east-west channel that runs close to a marsh area. This area was dredged to four feet, which allowed for optimal eel grass growth and additional water exchange.

Dredged material will be used not only to restore the marsh but also to restore a small barrier spit to create a beach for recreational use.
“Sediment gets placed on the marsh where Brennan does initial grading, based on what level will help the marsh environment the most. Once Brennan leaves there won’t be any vegetation, so there will be a huge volunteer planting effort,” said Caitlin Chafee, CRCC project manager.
Save the Bay will be working in between the dredging by Brennan and the planting to use a low ground pressure excavator, borrowed from the state’s mosquito abatement program, to dig small ditches.

“A natural marsh isn’t solid platform. It has creeks to bring in and out tidal water. Most of the original manmade ditches will be filled in and replaced by natural curved features. The manmade ditches increased the process of drowning in place so the natural ditches will work better,” Chaffee said.

Partnerships and Funding
There are many entities funding and supporting this project. The National Oceanic and Atmospheric Administration (NOAA) is the lead federal agency funding this as a pilot project to see if this is a viable way to enhance marsh habitat. The Department of Interior is funding this as part of Hurricane Sandy recovery to build coastal resilience and protect communities inland from the pond. The Town of Charlestown is supporting the work to protect the health and safety of its residents and to improve the circulation of the water to enhance recreational fishing and shellfishing, as well as provide boating access.

“Lots of people have wanted to dredge this area for a long time so the opportunity to combine dredging with environmental restoration really helped spurn the project,” Chafee said.

The $2 million project was funded mainly through a coastal resilience grant from NOAA. This grant program, jointly administered by NOAA’s National Ocean Service and NOAA Fisheries, helps fund projects that conserve and restore sustainable ecosystem processes and functions to reduce the vulnerability of coastal communities and infrastructure from the impacts of extreme weather and changing ocean condition. The CRMC received $982,103 from the program, providing a 2 to 1 match along with several partners.

The Town of Charlestown contributed $450,000 and the R.I. Coastal and Estuarine Habitat Restoration Program and Trust Fund also dedicated $90,000 of funding. Local nonprofit groups, The Shelter Harbor Conservation Society and the Salt Ponds Coalition raised a significant a

mount of funding for the project from their membership, and the US Fish & Wildlife Service’s Coastal Program is providing additional support.

“This is still a new process that they’re doing on the marshes but is something that is starting to be done more across the country. RI is pretty progressive. They see the ability to use dredge materials in an effective manner to save and enhance these marshes. The uniqueness is that you are taking the material and working with nature to develop a final grading plan. Not just sand on a beach but rebuilding a viable marsh,” Timmis said.