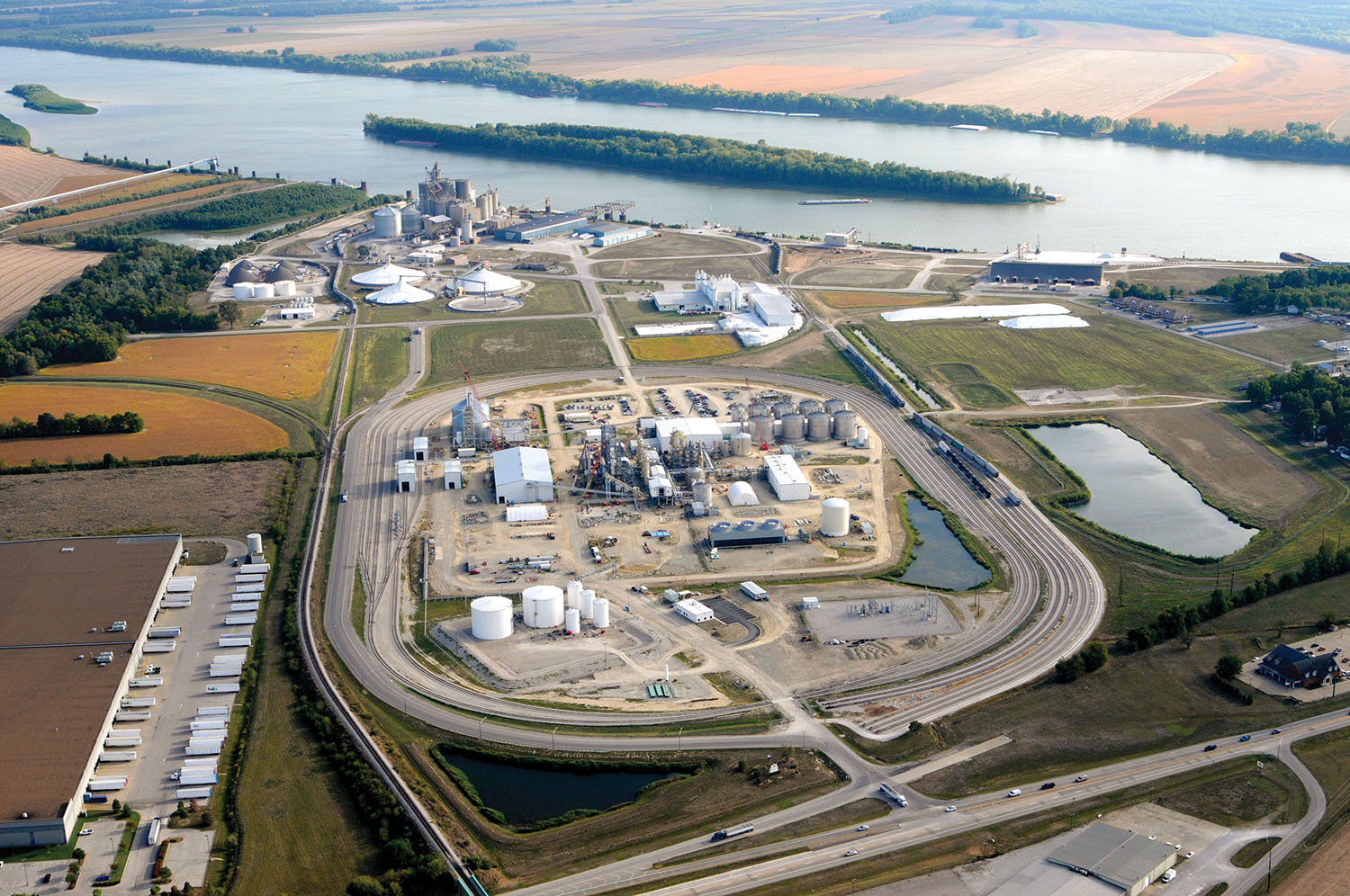 Mount Vernon Port Coming Off Biggest Year In Its History

Seeking future growth should be no problem for the Port of Indiana-Mount Vernon as it comes off its most successful year in its 42-year history. In 2018, the port recorded the greatest volume of cargo through its docks since it opened in 1976.

Over the course of last year, the port said it handled 9.6 million tons of products—a 41 percent increase over shipments it handled in 2017—and according to Port Director Phil Wilzbacher, the port has enough existing capacity to handle significantly more tonnage.

“We celebrate this landmark achievement,” said Wilzbacher. “And we gratefully acknowledge the dedicated efforts from our port companies that helped us etch 2018 into the history books. Clearly, our port’s success is a tribute to the continuing commitment of the people who work in this strong agricultural, energy and industrial port complex. It’s where opportunities for business partnerships, the multimodal connections of river, road and rail and the added benefit of year-round access to worldwide markets through the inland waterways system allow businesses to grow, move their products efficiently and meet their market demands.”

Wilzbacher said the impetus behind this record tonnage movement at Mount Vernon is the increase in coal, soy products, ethanol, dried distillers’ grain (DDG) and minerals. “Handling this record tonnage involved 4,700 loaded barges, more than 60,000 rail cars and more than 200,000 semi-trucks,” he said. “A key focus of the port moving forward is working to attract a steel-related industry on the port’s megasite.”

In a January 28 press release, the port said that it set quarterly records last year and registered May 2018 as a record shipping month before its tonnage in December 2018 surpassed that record.

“Continued strong international demand for coal sourced from the Illinois Coal Basin, overseas and domestic demand for agricultural products and investments to increase capacity by our port companies are all vital components of this historic achievement,” according to Wilzbacher.

The Port of Indiana-Mount Vernon handled 61 percent more coal in 2018 than it did it 2017, and experienced increased shipments in grain (up 46 percent), soy products (up 26 percent), ethanol (up 9 percent), and DDG (up 8 percent).

As is the case with many inland river ports and terminals, the nation’s crumbling infrastructure is one of the biggest challenges they face.

Wilzbacher said that not only is aging infrastructure an issue, but also attracting talent to logistics professions. “Those in the maritime industry must encourage increased utilization of ports and ways to sustain, nurture and grow port businesses while facing logistical and professional turnover,” he said. “Working to safeguard federal funding of critical waterway infrastructure is paramount, and last summer’s dedication of the Olmsted Locks and Dam is an example of the kind of critical infrastructure improvement and momentum we need to continue to seek and support.”

Acknowledging the positive milestone that was the opening of Olmsted, Wilzbacher said that infrastructure investments on the inland waterways are crucial. “This is crucial to industries that ship products to and from the Gulf of Mexico not only through the Port of Indiana-Mount Vernon, but any port or terminal on the inland river system,” he said.

Agreeing with Wilzbacher on challenging infrastructure is Don Miller, president and owner of Mount Vernon Barge Service (MVBS), which operates several docks at the port. “It’s been an ongoing battle,” he said, referring to infrastructure. “We support the ongoing modernization of the lock and dam system. We’ve seen many delays over the last two years, with breakdowns and repairs at the locks above and below us. We support more funding for the Corps’ budget for infrastructure, and we are very active in lobbying and supporting that effort.”

Despite the challenges with infrastructure, Miller said there are many advantages of doing business at Mount Vernon. “We are service providers and partners to the port authority in their ongoing efforts to attract industry to locate at the industrial park at the port,” he said. “We pride ourselves in being at a prime location for major agriculture production and manufacturing in the region.”

Miller said the port is located approximately 40 miles from I-64 and about 30 miles from I-69—both key interstates to transportation companies. “Additionally,” he added, “the port has excellent rail service provided by Evansville and Western railroads.”

Both Wilzbacher and Miller said they expect some upgrades to their operations this year. Wilzbacher said the Ports of Indiana-Mount Vernon is slated to make a $2 million capital investment in the port’s general cargo terminal.

The capital investments, according to Wilzbacher, will include the installation of a new 60-ton overhead gantry crane. “Our existing overhead crane is more than 40 years old and at the end of its useful life,” he said. “The design specifications for the new crane are being finalized and then this project will go out for bid.”

The new overhead gantry crane will have a 60-ton capacity, the same as the one the port is replacing, and can be used for transloading any general cargo between barge, rail, truck and warehouse.

Weather permitting, the port will also begin work on replacing the floor of its general cargo terminal, which Wilzbacher said will bring the facility to a nearly like-new condition.

“These two planned capital projects are a key component of our targeted marketing strategy to attract a steel-related facility to the Port of Indiana-Mount Vernon’s 544-acre megasite,” said Wilzbacher. “We expect both projects to be completed by the end of the year.”

MVBS, which handles all the barges that come in and out of the port as its bulk cargo handler, has already been updating its facility to accommodate larger volumes. In addition to upgrading its barge cleaning and topside repair facility, Miller said the company recently added a new pumping system and a new crane. “This port is open for business,” he said. “We have been very busy, and we have lots of land available for development. There’s additional capacity at our docks, and we encourage cargo shippers to look closely at the money saved by moving cargoes via barge rather than rail or truck.”

The Ports Of Indiana

The Port of Indiana-Mount Vernon has nearly 1,240 acres of land and 8,000 linear feet of riverfront, with more than 600 acres of greenfield industrial sites available for development.

Along with the large overhead gantry crane, the port has public piers for transloading heavy-lift cargo and a 53,000-square-foot transit shed.

According to Wilzbacher, the Corps of Engineers has ranked the Ports of Indiana-Mount Vernon as the sixth largest inland river port in the country. “The port provides efficient global access, multimodal connections and is ideal for companies seeking strong agricultural and industrial partners,” he said.

“The port is also designed as a foreign trade zone, so it can offer significant cost savings to businesses that import goods by delaying or reducing duty payments on certain products,” added Wilzbacher.

MVBS, located at Mile 828 on the Ohio River at Mount Vernon, provides shippers with harbor, repair, fleeting, stevedoring and cleaning services and has done so for nearly 50 years.

Additionally, Miller said MVBS runs boat services for the port’s docks and it provides all the other boat and harbor services needed for the general cargo dock operated by CTLC.

After 16 years of service to the port authority, Cooper assisted Coda and the organization with the leadership transition through the end of 2018.

Coda—who has 25 years of maritime and multimodal experience on the Great Lakes, Gulf of Mexico and Ohio River—most recently served as the executive director for the Duluth Seaway Port Authority, where he gained operations experience in the busiest port district on the Great Lakes.

“It’s an honor to be part of the Ports of Indiana and to have the opportunity to bring my family back to our roots,” said Coda. “I have always enjoyed watching the growth and development of Indiana’s ports, and I could not be more excited about the transformational opportunities that lie ahead. Indiana truly has a unique port system that is recognized around the maritime industry as one of the premier port authorities in the country. I look forward to working with our customers, stakeholders, local communities and the Ports of Indiana team to build on this record of success.”

“It’s been a privilege to lead the Ports of Indiana and work alongside a great team that has made such tremendous contributions to the state of Indiana,” said Cooper last year when discussing his retirement. “Our success can largely be attributed to the partnerships we have developed with world class companies that call our ports home. There is no question that the Ports of Indiana is in great hands, led by an outstanding group of commissioners, a superior staff committed to excellence, and now Vanta, as the new captain of the ship. I’m looking forward to watching this team take the Ports of Indiana to the next level.”

Caption for top photo: The port has nearly 1,240 acres of land and 8,000 linear feet of riverfront, with more than 600 acres of greenfield industrial sites available for development. (Photo courtesy of Port of Indiana—Mount Vernon)