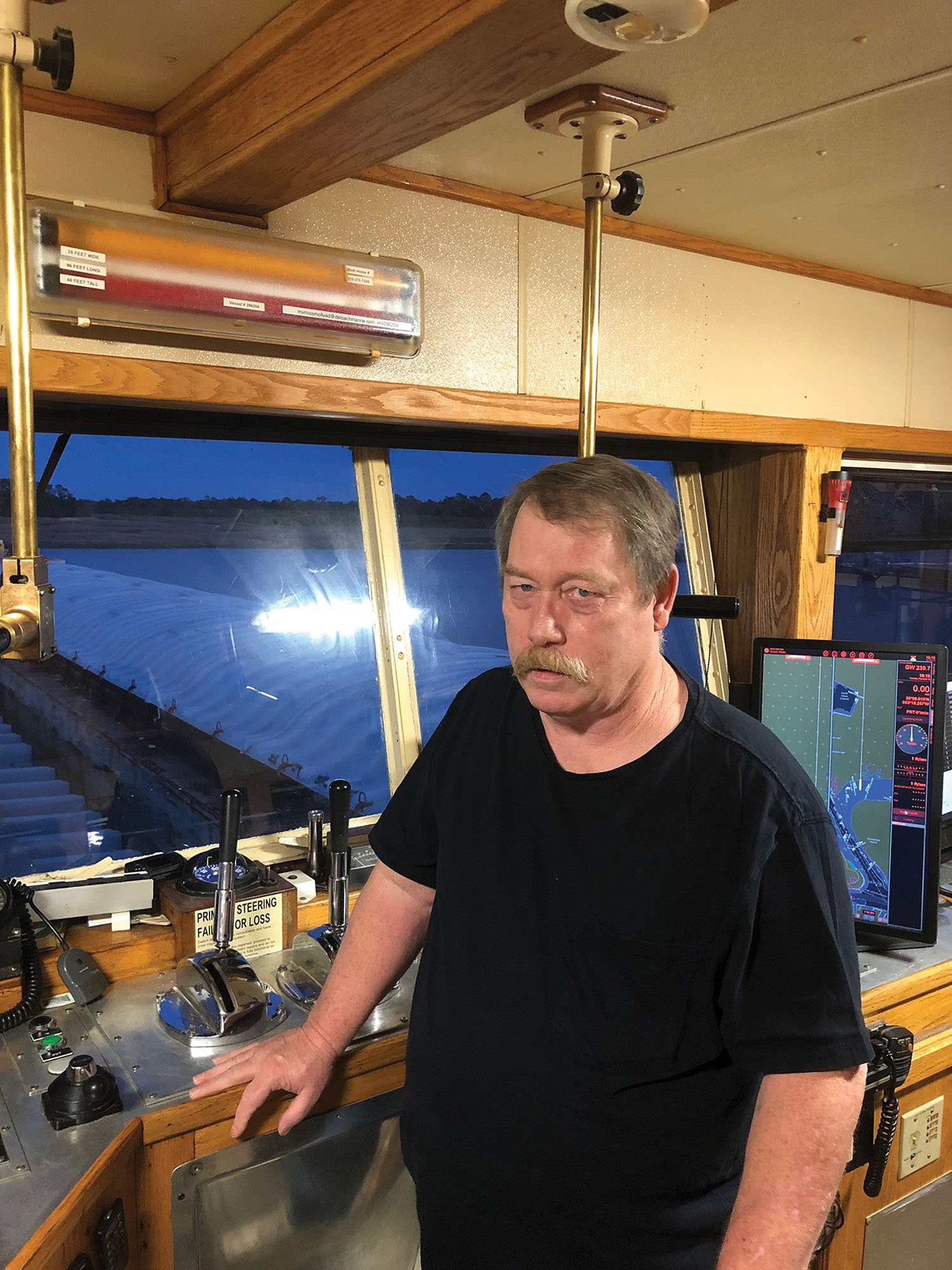 Some people spend years or even decades in search of a calling or career that fulfills them.

Others, though, find it at an early age, never look back and go on to spend a lifetime pursuing that passion with excellence and enthusiasm.

The latter describes Ben Moffett, a 46-year veteran of the inland waterways who’s spent the last 33 years as a captain for Deloach Marine Services.

Moffett was born in 1956 in Greenville, Miss., a true Mississippi River town located in Northwest Mississippi. Greenville is part of the Mississippi Delta, a floodplain between the Mississippi and Yazoo rivers known for its agriculture, history, Southern culture and music. Greenville also played a prominent role in the Great Flood of 1927, with the devastating Mound Landing crevasse occurring just upriver.

And while Moffett grew up near the Mississippi River in a town teeming with towing companies, he had no family legacy or connection pulling him toward the maritime industry.

“Just the opposite,” he said.

Instead, the connection came through a family friend: W.A. “Peanut” Hollinger.

“Peanut Hollinger was friends with my parents, and they worked it out to get me on there,” Moffett said.

“Not quite legal, but you know,” Moffett said of his age.

Moffett said the first mate he worked under, Roy Budwine, taught and challenged him when he was just a green deckhand. He also credits a couple captains from those early days for his longtime success in the wheelhouse.

“They let me steer when I was off watch on those big tows,” he said.

When asked how long it took him to know that working on a towboat was the life for him, Moffett said it was almost immediate.

“Pretty much from the first trip,” he said. “It was more money than anything in Greenville. A towboat had a roof, it had a heater, and it paid more money. And I went to the wheelhouse as fast as I could.”

After getting his start with Hollinger, Moffett went on to work for Flowers Transportation, also of Greenville. He began captaining vessels in 1977. With Flowers, Moffett worked on the mv. Rusty Flowers and mv. Miss Kae-D. He etched his name in the record books aboard the Miss Kae-D when in 1981 that vessel pushed a record-setting tow of 72 barges upriver from Baton Rouge, La., to Kentucky. Moffett said he got off near Convent, La., to make room for a mate named High Pockets who’d been with Flowers for a long time.

“He’d been on the river for a long, long time and had been riding the Kae-D pretty regularly, so they wanted him on there,” Moffett said. “We were at the Sunshine Bridge when I got off, and they had 60. That was a lot of barges.”

Through the late 1970s and early 1980s, Moffett worked on most if not all of the rivers in the South and Midwest, including the Ohio, Illinois, the Upper and Lower Mississippi, the Arkansas, the Tennessee-Tombigbee Waterway and Black Warrior River, and the Gulf Intracoastal Waterway. Moffett said he’s worked on everything from 400 hp. boats up to 5,600 hp. vessels and larger.

Moffett persevered during the downturn in the economy in the 1980s, when he was “competing with guys with 30 years experience.”

Then in 1986, Moffett came to work for Port Allen, La.-based Deloach Marine Services, and that’s where Moffett said he will be until he retires.

“They’re friends as well as bosses,” Moffett said of Zeland David “Z. Dave” Deloach and the other managers at Deloach Marine. “I wouldn’t consider going anywhere else.”

Moffett takes the most pride in the pilots he’s trained over the years. He is licensed as a designated examiner, which means he’s integral to upcoming mariners getting their steersman license.

“I’ve trained I can’t count how many pilots for Deloach,” Moffett said. “Some are still here, some not.”

Reflecting on his nearly five decades in the industry, Moffett is fast to praise today’s more rigorous environmental and safety regulations. He also praised the safety-first culture Deloach has instilled in Deloach Marine.

“For Deloach, if you don’t think it’s safe, you don’t have to do it,” Moffett said. “Whereas back in the old days, if you didn’t do it, they’d find someone who would.”

Moffett admits that life on a towboat can be hard on the mariner’s family.

“It kind of goes with towboating,” he said.

But he’s also been blessed with two daughters and his wife, Sheri. Looking back, Moffett said he has no regrets.

“It’s been a good life,” Moffett said. “It’s hard raising kids—I’ve got two girls—but they never wanted for anything, and they turned out good.”

When asked what he likes most about towboating, Moffett replied, “All of it. Every day is a challenge out here. Every river’s got its own tricks. It’s been an adventure.”

When Moffett is on duty, he’s aboard the mv. Mollye D, a former Deloach Marine vessel that’s now part of Ingram Barge Company’s fleet. He lives in Jena, La.