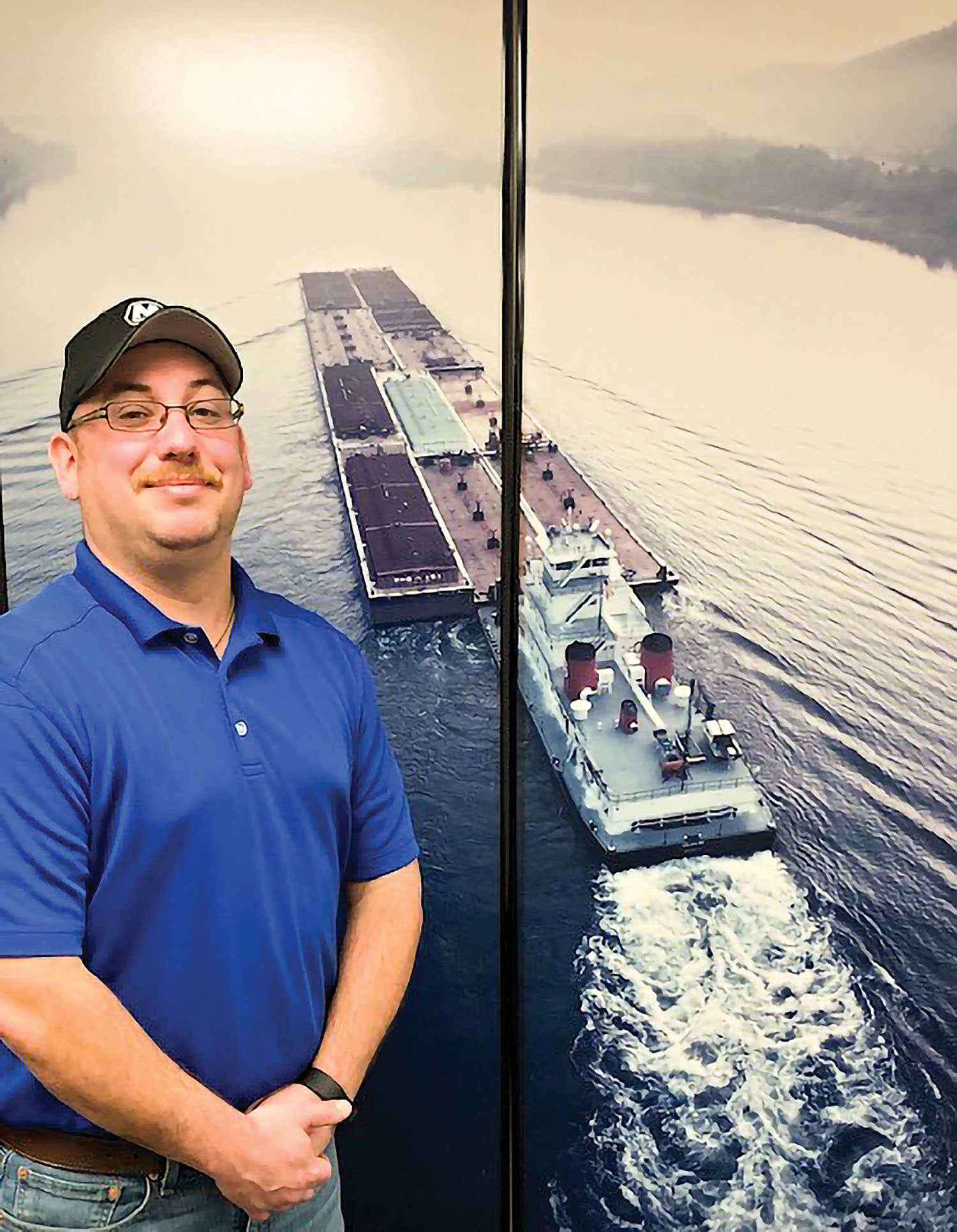 Unlike many who choose a river career, Capt. Chris Snouffer had no family members on the rivers. In fact, he had no intention of working on the rivers at all when he accompanied a friend to a job interview at Florida Marine in 2001. He wanted to be a firefighter instead.

“I was just tagging along for support,” he told The Waterways Journal. The friend ended up not taking the job, and it was Snouffer who went to work for Florida Marine as a deckhand and tankerman. His first boat was the mv. Jerry Jones, which he caught at Greenville, Miss.

Once he made his choice, Snouffer was committed. “I told myself that if I was going to do this for a living, I was going to be a captain one day,” he said. He stayed with Florida Marine for a 2-1/2 years before moving to Marathon Petroleum. “Marathon always provided great support for my family and career,” said Snouffer. He has been with Marathon ever since, rising from deckhand to steersman and pilot; he earned his license and and became a vessel captain in 2015.

Among the captains who encouraged him, Snouffer mentioned Earl Parker, William Felty, Marty Leake, and Adam Rhoden. David Smith was a port captain with Marathon Ashland (as it was then known) when Snouffer joined, and his brother Tommy Smith was another captain who encouraged Snouffer.

Along the way, Snouffer has watched Marathon grow its fleet from five line-haul boats and two harbor tugs to 23 line-haul boats today. He’s worked on most of them in one capacity or another, pushing tank barges filled with diesel, gasoline, jet fuel or black oil on the Mon, Allegheny, Kanawha, Cumberland, Tennessee, Illinois, Ohio, Upper and Lower Mississippi rivers. He says they each have their own characteristics and he enjoys them all, but, when pressed, concedes that the Lower Mississippi has the “prettiest sunsets.”

Snouffer lives with his wife and two daughters in Middleport, Ohio, a small town on the Ohio River just upstream from where the Kanawha River joins the Ohio, where he grew up. He came ashore this year to begin a shoreside position as an operations specialist.

The way was prepared for his shoreside work when Snouffer was part of Marathon’s team that implemented the Subchapter M regulations. He worked closely with operations supervisor Fred Nyhuis, a familiar face at many industry meetings and committees.

Snouffer has high praise for Marathon’s safety culture. He says Subchapter M will be a benefit to the industry because “it makes for a stronger safety management system, better preventive maintenance programs and more robust vessel audits, all making crews safer.”

Asked for advice for those thinking about a river career, Snouffer said, “It’s great for folks coming out of the military, because you have that command structure that’s familiar.”

The hardest part about a river career? The long stretches away from home. Snouffer said he was fortunate in his wife, whose maiden name was Burge. Many members of her family worked on the rivers, including her father Charlie Burge, a river engineer with Amherst Madison, and several other family members who serve the river industry in multiple capacities. “She was fully aware what life on the river was all about and has always been a great supporter in my career.”

Snouffer adds, “We used to get a subscription to The Waterways Journal as a Christmas gift for her grandfather, Capt. ‘Jake’ Burge.”

Snouffer also managed to achieve his other childhood dream. For the past 15 years, he has served as a volunteer firefighter in Middleport.