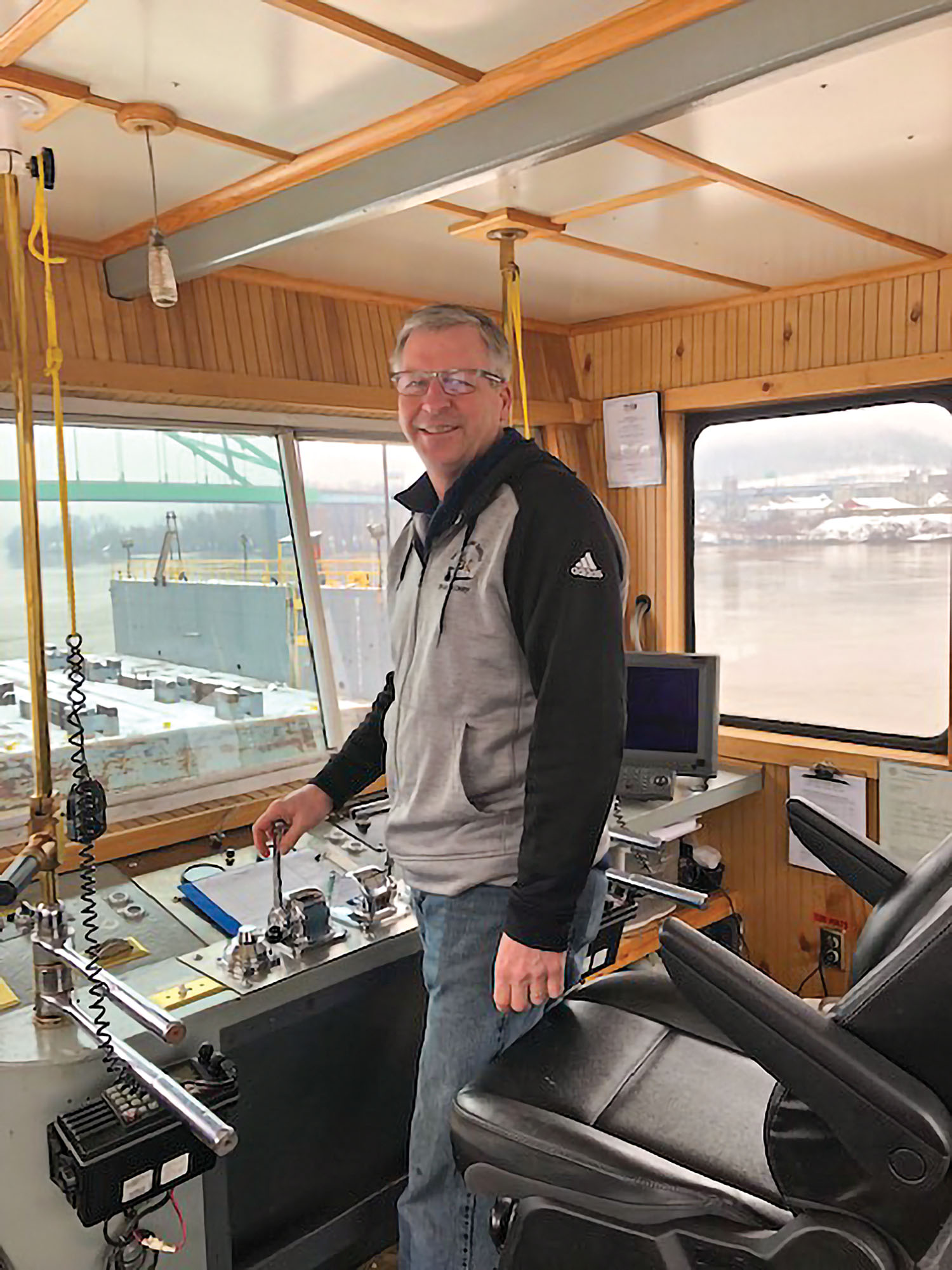 The second steamboat to carry the name Chris Greene—the first was destroyed by fire in 1922—played an important part in the early life of harbor boat pilot Ron Harrison. It was his grandfather, George Harrison Sr., who bought it in 1950 and converted it to a yacht club in Dayton, Ky., that became the Harrison’s family business. Ron vividly remembers when the Chris Greene caught fire in 1968 and burned to the waterline.

“My grandfather operated it as a bar and restaurant called Harrison Boat Harbor (located at Mile 466 on the Ohio River). It was 190 feet long and obviously had a lot of historic appeal. When he died of a stroke in the 1970s, my father, George Jr., took it over, but then had to move it to Melbourne, Ky., because the city of Dayton wanted to install a floodwall,” Capt. Harrison said.

“I’ve been around boats all my life. I worked at the harbor a lot while I was growing up.” He said it is where he learned the finer points of working on the river, doing tasks such as scraping, painting, general repairs and maintenance and of course dealing with an ever-changing river.

Harrison continued to assist at the family business, as did his brother Bob, who was older by four years. After their father died in 1985, Ron went on to college at Northern Kentucky University, where he majored in education and history, completed a year of graduate school and taught for a time. Meanwhile, his mother, Celeste, and his brother kept the boat harbor going, and Ron helped when he could, but by now the pleasure boat business had lost some of its luster for them. The Harrisons sold off the docks and closed it for good in 1994, concentrating instead on the commercial side of things, he said.

At this point, Ron went to work full-time with Bob, unloading barges and doing fleet work. Long hours and hard work, with which every riverman can identify, he said, was no different for Capt. Harrison in the early years. He received his license in 1997 and today is on his fifth issuance.

“I owe my brother a debt of gratitude for my license. It was his knowledge and experience that helped form my skills to run boats,” he said, adding that it was also in 1997 that he lived through one of his most memorable experiences on the river: the time the Ohio River crested over 65 feet. “I saw water where I thought I would never see it and hope I will not see it again.”

His brother’s company was eventually purchased by Greater Cincinnati Marine Service. Ron continued to operate the harbor in Silver Grove for GCMS. “I like harbor work more than linehaul towing,” the younger Harrison said. “It provides a lot of variety. There’s constant change.”

In 2005, when his brother bought Bellaire Harbor Service from Ohio River Salvage Company, which is where the Harrisons hold forth today, Ron went with him. “We have a great relationship,” Ron said about working with his brother. “He trusts me to do things right and I’m happy to have that opportunity.”

One of the things Ron is currently in charge of is the implementation of Subchapter M regulations for Bellaire Harbor Service. “This was another challenge the industry had to take on and we at Bellaire Harbor took it seriously and were aggressive in achieving our COI’s.”

Bellaire Harbor Service was issued the first Certificate of Inspection in the Pittsburgh area by the Coast Guard for the mv. Quaker State, and just recently received its fourth COI, due to Ron Harrison’s efforts, said his brother.

Capt. Harrison and Sharon, his wife of 26 years, live in St. Clairsville, Ohio. They have two sets of twins, Maddie and Allie are 24, while Caroline and Samantha are 20. “It is to my wife that I have to give so much thanks and appreciation for supporting my career. She was the one who kept the family going when I was gone for long hours and sometimes days. Even though I missed out on family time and events, we were always a family in the end.”