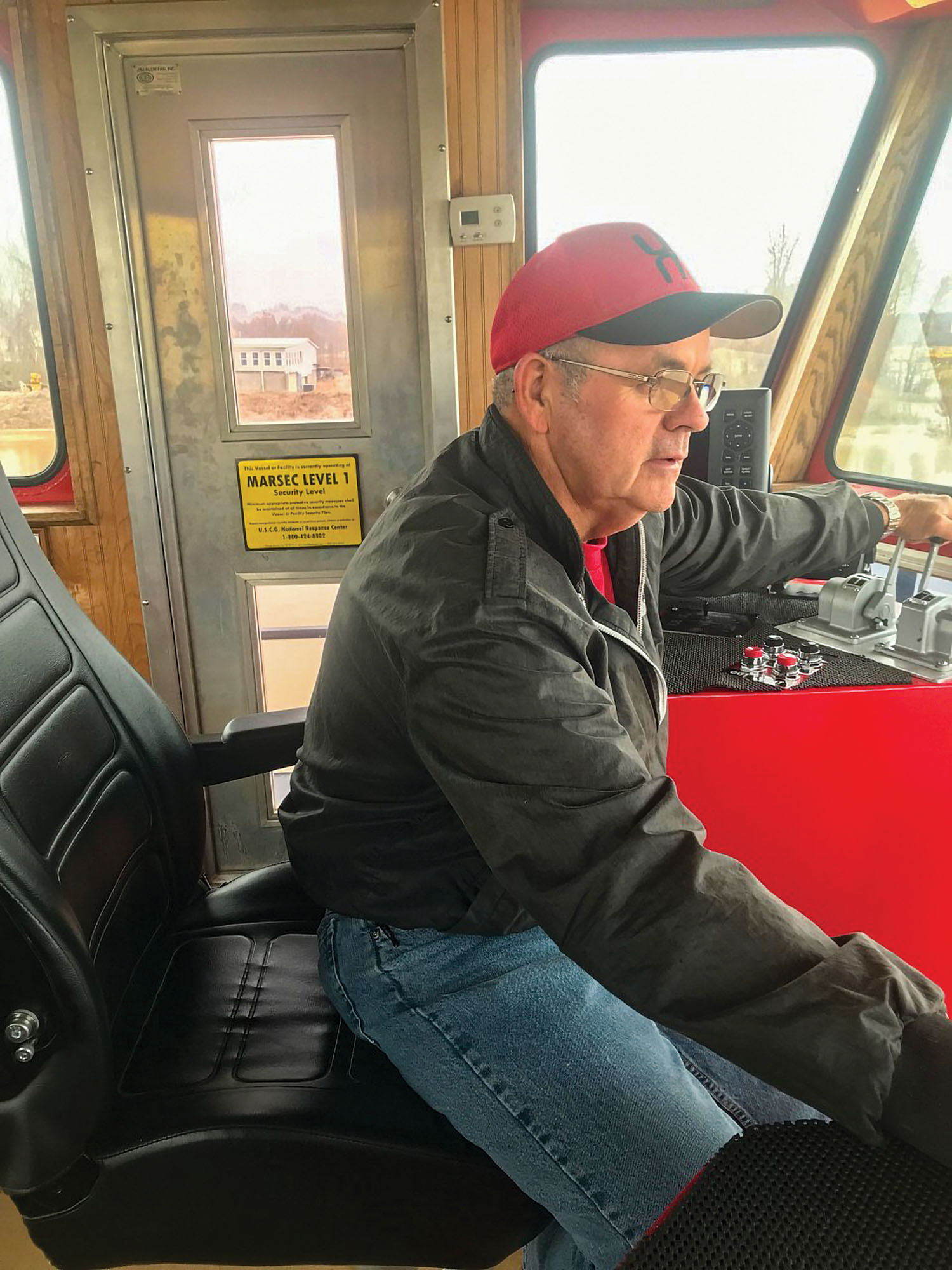 Having lived in Greenville, Miss., for most of his childhood, Roncali boarded his first towboat, the mv. Bruce Brown owned by Ingram Barge Company, where his brother-in-law introduced him to the boat’s captain. “The first thing Capt. Jimmy Keith asked me was how old I was,” recalls Roncali. “Of course, I fibbed and told him I was 18. He laughed and took all of my information before hiring me on the spot.”

Despite his suspicions that the captain knew he was lying about his age, Roncali went home and packed his bags for his first river journey.

Luckily for Roncali, his brother-in-law Alvin Adams was onboard the boat with him. “Alvin was a great mate and taught me how to make bumpers and mats out of line,” he said. “I was a quick learner, and the captain liked me so well, that he gave me a raise on my first trip.”

Notwithstanding his hard work and recent pay raise, Roncali said he had a problem that affects most teenage boys—a girl. Since the third grade, he had a crush on a schoolmate named Marilyn. “I told her that I liked her, but she didn’t give me the same response,” he said. “After a couple of years, she went to a different school.”

By the time the two were reunited as teenagers, Marilyn had decided she also had a crush on Roncali. “Well, now I was 15, in love and on a towboat. I’d call home every chance I’d get.”

It was on this trip aboard the mv. F.R. Bigelow that Roncali had a disagreement with an older deckhand, which led them to both being fired. “I was doing what I was asked, but he was a little jealous of me,” he said. “In this case, I was doing my work so well that I got a spankin’ for it.”

About a week later, Roncali said Ingram called him back to work, and he took the company up on the offer. “I got back on the Bigelow and lasted about a week,” he said. “Love had won me over, and I went to be with Marilyn and we were married at 16.”

Following their marriage, Roncali joined Waterways Marine in Greenville as a deckhand. Roncali gained valuable experience onboard the company’s numerous towboats, including the mvs. Marlin, Mallard, Annilou and Jeff T. At the same time his experience was expanding, so was his family back at home. His first of six children was born and it wasn’t long after that he began training in the wheelhouse on the mv. Jeff T.

After a year or so, Ergon Marine opened in Vicksburg, Miss., so Roncali asked for a job. He started out by running a small grocery boat until he turned 18. “The next day, I went to take my test to become a boat pilot and a tankerman,” he said. “I was now legally able to run a towboat and have my own crew. I loved my job.”

By the time he was 21, Roncali became a master pilot. He continued to pilot boats for years until 1984, when he and Ergon parted ways.

“The river was still calling me,” he said. After a couple of years doing small engine repairs, his brother-in-law told him about a company that was looking for towboat pilots in Memphis called Wepfer Marine.

“My wife and I decided that I’d work for Wepfer Marine for two or three months until I could come back and find work closer to home,” he said. “I was hired by Capt. James Jones of Wepfer on the spot, and this started my dream job.”

At the end of his three-month plan at Wepfer, Roncali said he was asked to run an operation at Tiptonville, Tenn. He boarded the mv. Elizabeth Shoaf and headed off to Tiptonville.

During this time, his wife and children were still down south. “The kids were about to start school, so I thought I’d just move the family up on the boat with me until I could find a house,” he said. “Little House on the Prairie had nothing on our little house on the mv. Elizabeth Shoaf.”

Years have gone by, the Roncalis adopted two more children and about the only thing that has remained the same is working at Wepfer Marine.

As the company has grown, Roncali said so have the boats. “The towboats are getting newer and nicer,” he said. About 16 years ago, the company purchased an old boat Roncali had worked on when he was younger, the mv. Mallard, from Memphis, where it had been sitting for a long time. “I got a phone call one morning from Mr. [John] Wepfer and Mr. [George] Leavell letting me know they wanted to tell me something.”

Worried that something was wrong, Roncali said he prepared himself for bad news. “They told me that they had bought the Mallard and they wanted to name it after me, but knowing me as they did, they knew that I’d rather have it named after my wife,” he said. “So, they told me that they now have a boat named the mv. Marilyn Roncali and it was given to me to operate.”

Roncali was tasked to work the vessel at the company’s Hickman, Ky., location, where he has been for nearly 18 years. “There’s nothing like this experience on the Mississippi River on a towboat,” he said.

Roncali said that he would encourage anyone with an interest in becoming a towboat captain to work hard. “Set your goals, don’t fall in love at a young age, and you will make it to the wheelhouse,” he said. “Once it’s in your blood, nothing else will work job-wise.”