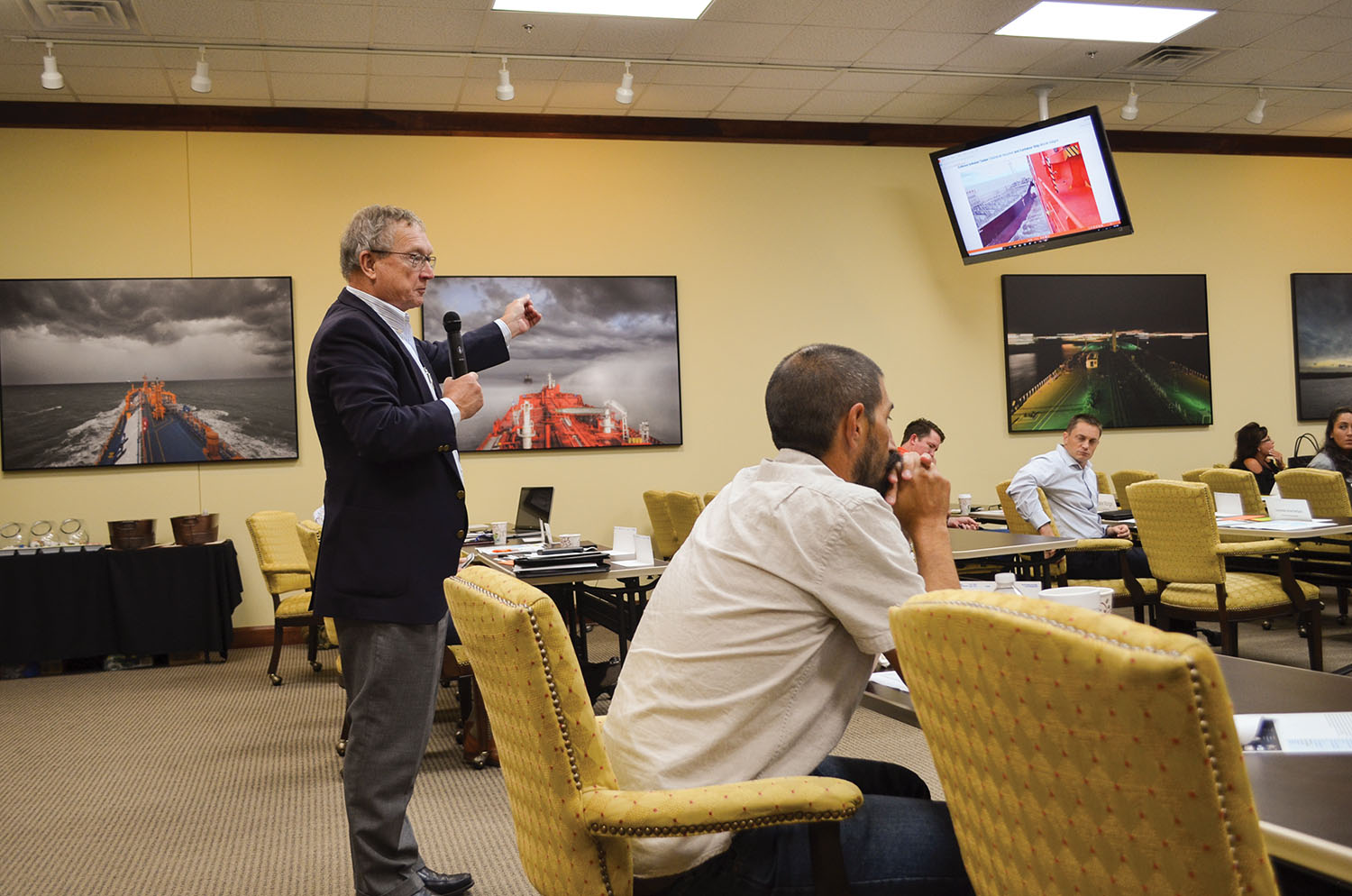 Houston Ship Channel vessel operators convened February 7-8 at the Houston Pilots office in Deer Park, Texas, for the Houston-Area Brownwater-Bluewater Symposium—an informational seminar held twice a year to bring together blue and brownwater pilots to discuss issues and concerns in sharing the channel.

The 530-foot wide Houston Ship Channel—a shipping gateway to the Gulf of Mexico, between Galveston Island and the Bolivar Peninsula—is busy with nearly 70 deep-draft vessels and up to 400 towboats a day, not including simple barge movements from area docks.

Each year, more than 250,000 vessels and barges pass through the Port of Houston’s complex on the Houston Ship Channel. Even with so much traffic coming in and out of the channel, it’s rare that vessels become involved in an incident on the water.

One such incident, however, eventually led to the formation of the Houston-Area Brownwater-Bluewater Symposium. On the afternoon of March 24, 2014, the Summer Wind, a large bulk carrier, collided with the mv. Miss Susan, a 70-foot towboat that was pushing two 300-foot-long tank barges loaded with fuel oil, in the Houston Ship Channel.

The collision breached the hull of the forward tank barge in the tow, spilling about 168,000 gallons of fuel oil into the channel. Vapors from the fuel caused minor injuries to two crewmembers aboard the Miss Susan.

The Pilot Board Investigation and Recommendation Committee (PBIRC) was established over 25 years ago to make recommendations regarding incidents to the pilots who operate in the Houston Ship Channel. In response to the collision, the PBIRC held a hearing October 6, 2014, at the Port of Houston Authority executive offices.

During the hearing, Houston Branch Pilot Capt. Michael Pizzitola, who piloted the Summer Wind at the time of the incident, testified. The board found that no willful misconduct on the part of Pizzitola in the handling of the Summer Wind. The captain of the Miss Susan declined to attend the hearing.

Capt. Marcus Woodring, a former U.S. Coast Guard Captain of the Port and the presiding chairman of PBIRC, was at the hearing. “At the hearing, we have to come up with findings and recommendations that range from a letter of condemnation to the pilots, reprimands, or the temporary or permanent suspension of licenses,” said Woodring. “The goal is to make sure the event doesn’t happen again, and making recommendations is a part of that.”

During the hearing, the board recommended that Pizzitola serve as a Houston Pilot representative to the Lone Star Harbor Safety Committee to help develop a training module that focuses on the interface of tows and deep-draft vessels in the shipping channel. Woodring said the recommendation specified that the training should enhance the situational awareness of mariners who operate in the Houston Ship Channel.

In regard to the training, it was proposed at the hearing that “whether there are periods of low visibility, imminent port closures, or prolonged restrictions, mariners would be more cognizant of the concerns of the various vessels that they would meet or overtake.”

The Brownwater-Bluewater Symposium, the training module both Pizzitola and the Lone Star Harbor Safety Committee eventually developed, has been growing in popularity ever since. Woodring said the symposium is an effective tool in allowing vessel operators in the water to understand other operators’ perspectives on their business in the channel.

“One example is the fact that the shipping channel has 15-foot-deep shipping lanes for barges on the sides,” said Woodring. “During one of our symposiums, a deep-draft pilot asked a towboat operator why brownwater vessels aren’t using the barge lanes in the channel. In response, the towboat captain said that if tows can reach deeper water, they can go up to 3 knots faster and arrive at their destinations quicker. The bluewater pilot was surprised to learn that, and there was suddenly an understanding between the two operators. It was down to economics.”

Capt. David Foret Jr., with The ACTion Group as a brownwater representative, said a variety of vessel operators attend the symposiums to learn how to “buy down” risks in the channel, improve communication, provide mariners a stakeholder perspective, and for education on the various types of ships on the water and their handling characteristics.

Foret said that each symposium begins with an exercise to demonstrate the uniqueness of every attendee. “One of our main goals is to provide a venue where each stakeholder can be exposed to and take a look through another stakeholder’s lens,” he said. “We review case studies of ship-to-ship interaction and ship-to-tow interaction.”

Capt. Kevin Oditt, the U.S. Coast Guard Sector Commander and Captain of the Port, added that the symposium not only offers best practices, but is also a testament to the commitment of the professional mariners and their companies to continually improve navigation safety on the busiest waterway in the western hemisphere. “With so many vessels, there are very few incidents on channel,” said Oditt. “The Coast Guard is excited to be able to participate in this critical partnership.”

The next Brownwater-Bluewater Symposium will be held September 19-20 at the same location.

About The Pilot Board

The Pilot Board has exclusive jurisdiction over the piloting of vessels in Harris County ports, including intermediate stops and landing places for vessels on navigable streams wholly or partially located in the board’s jurisdiction.

The PBIRC is appointed by the Pilot Board, and institutes investigations or hearings or both to consider casualties, accidents or other actions that violate the act or rules, and recommend action to the Pilot Board.

Slideshow with more images from the Brownwater-Bluewater Symposium: 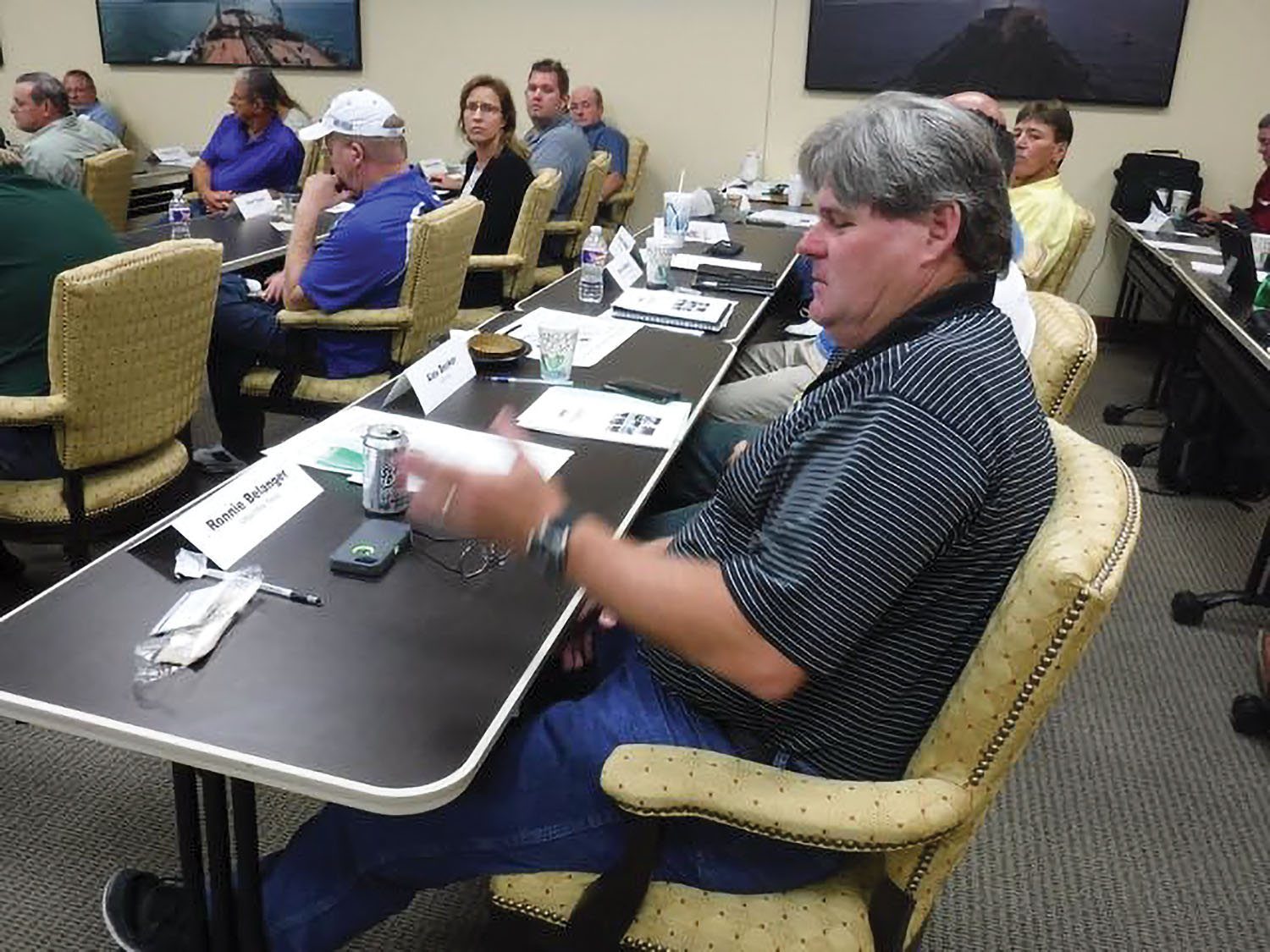 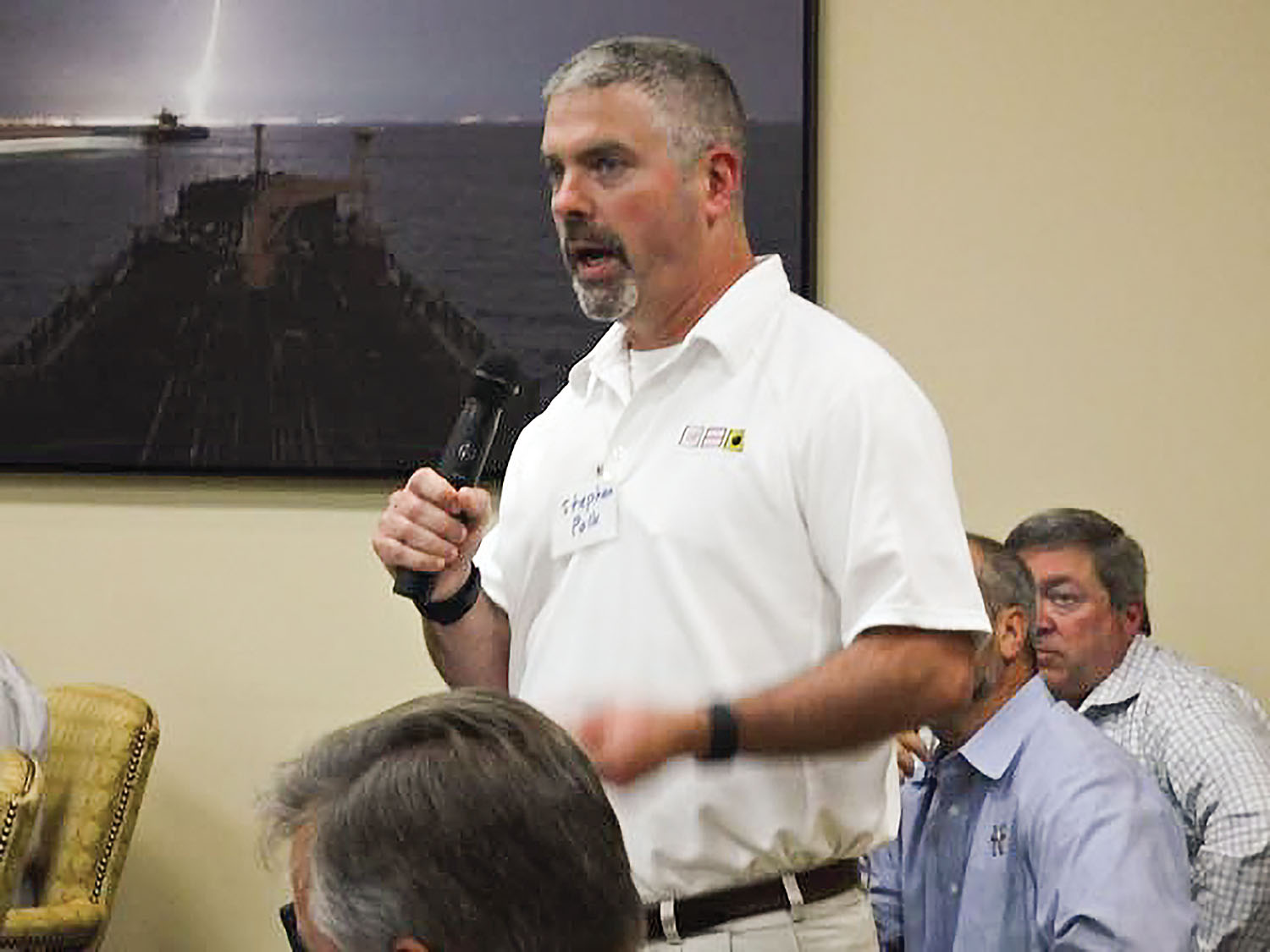 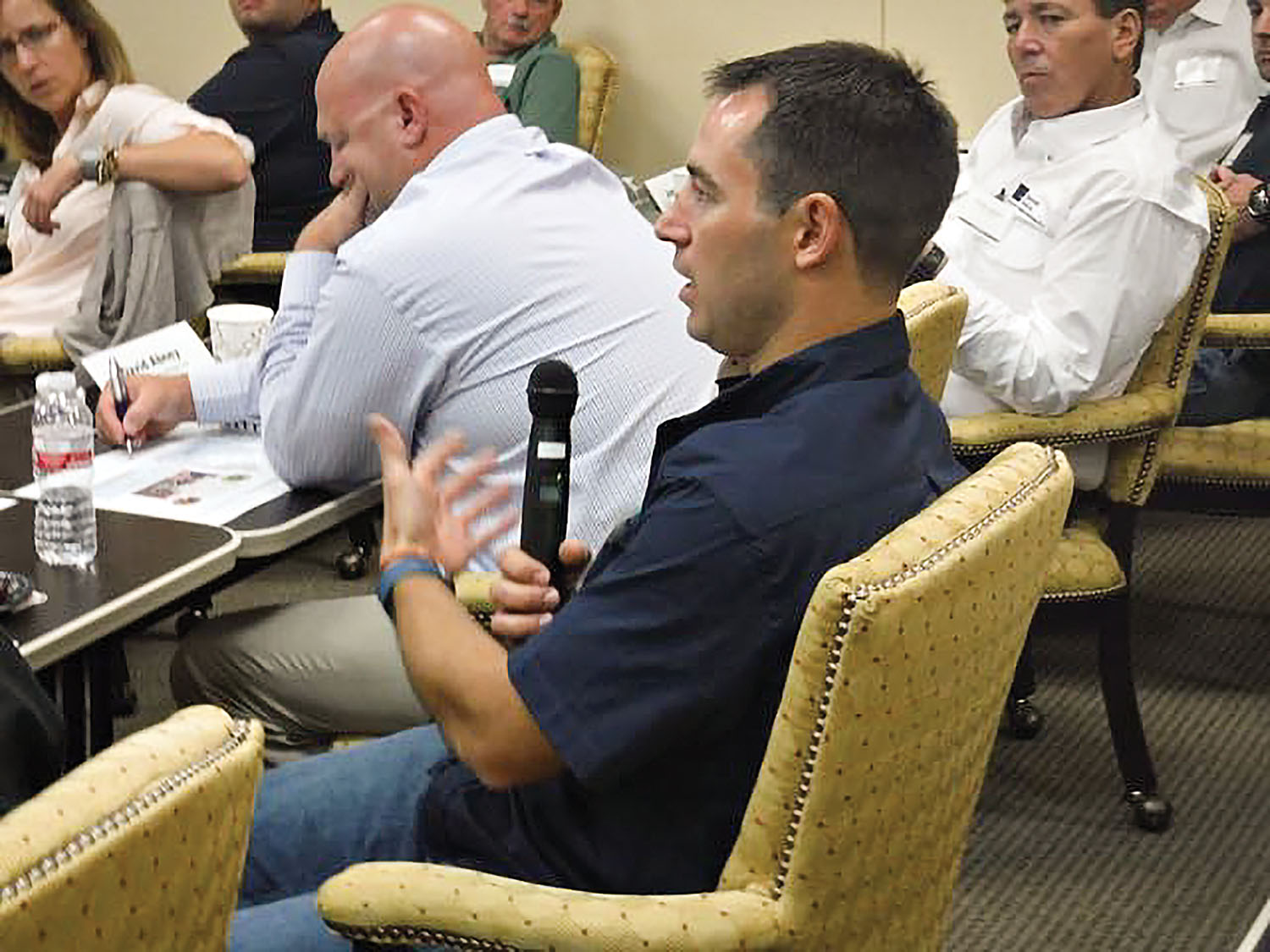 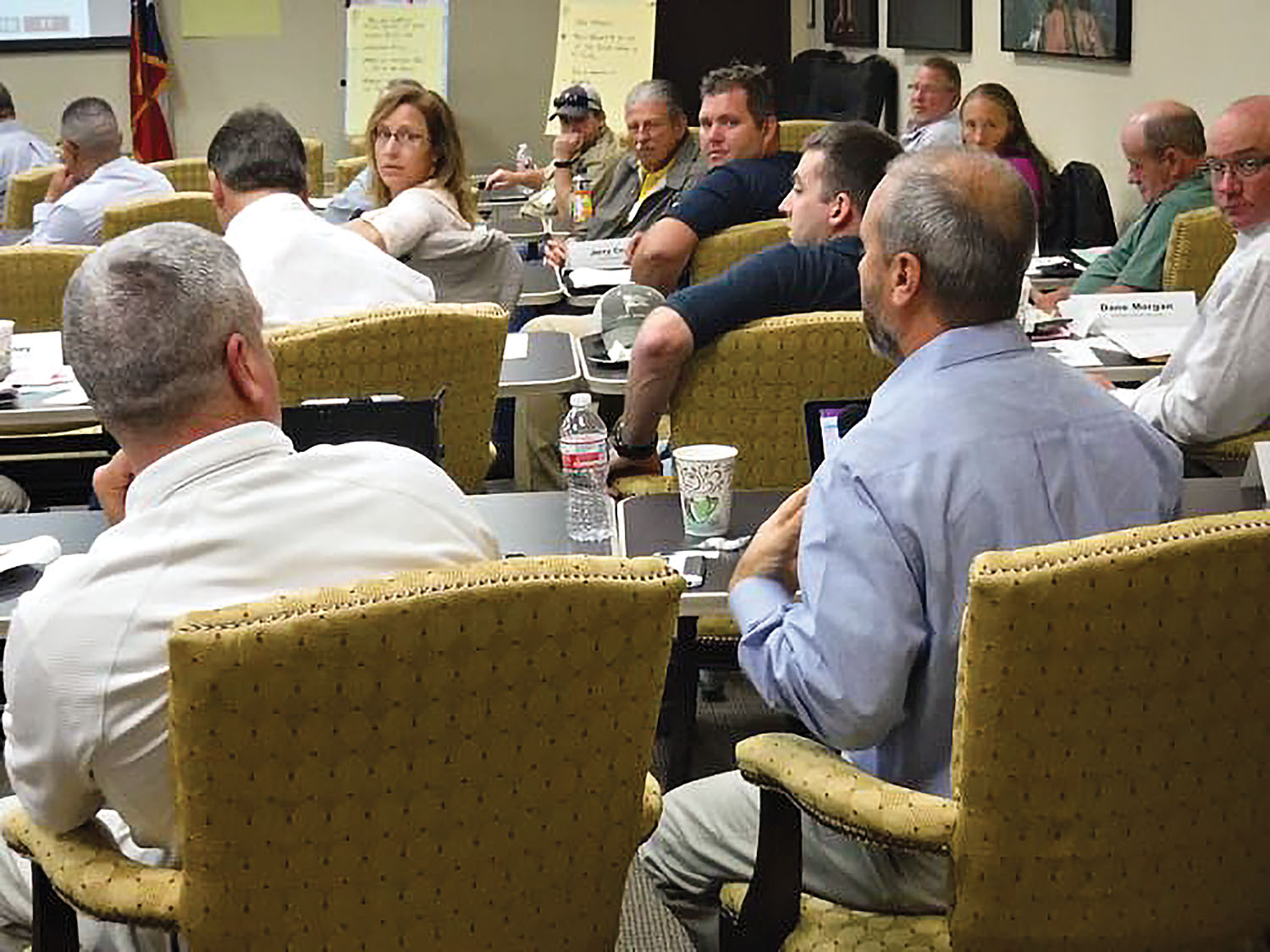 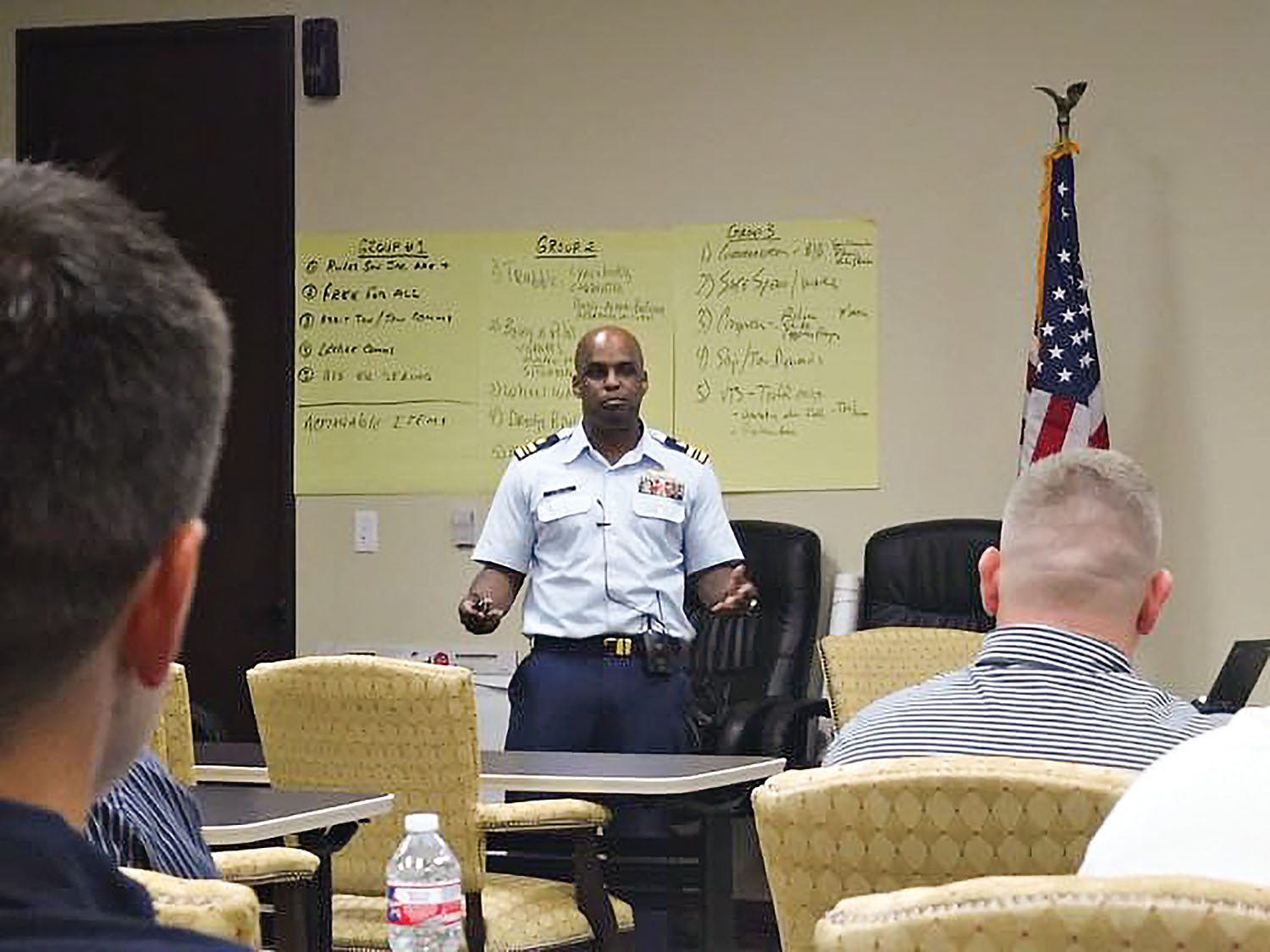 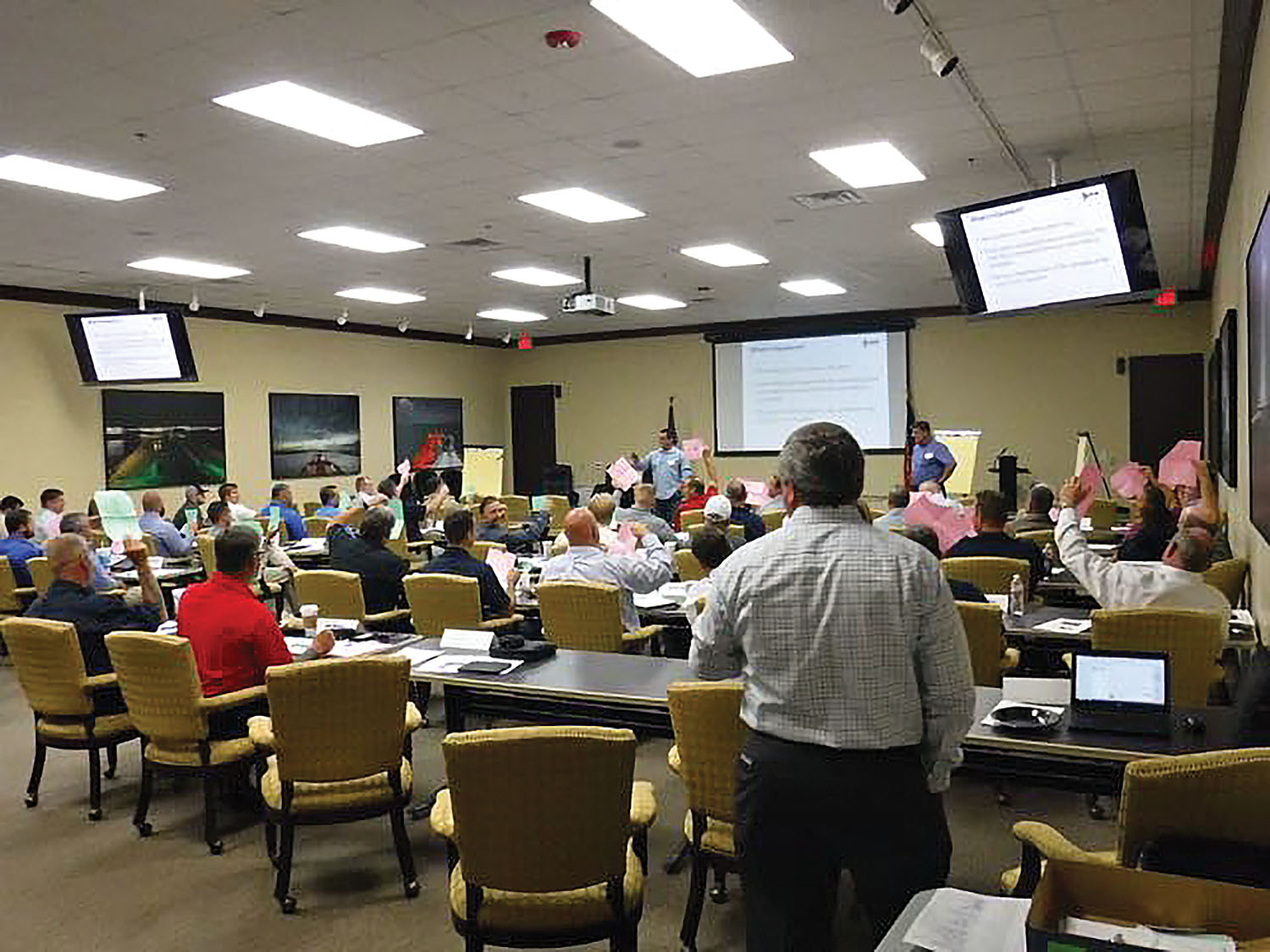 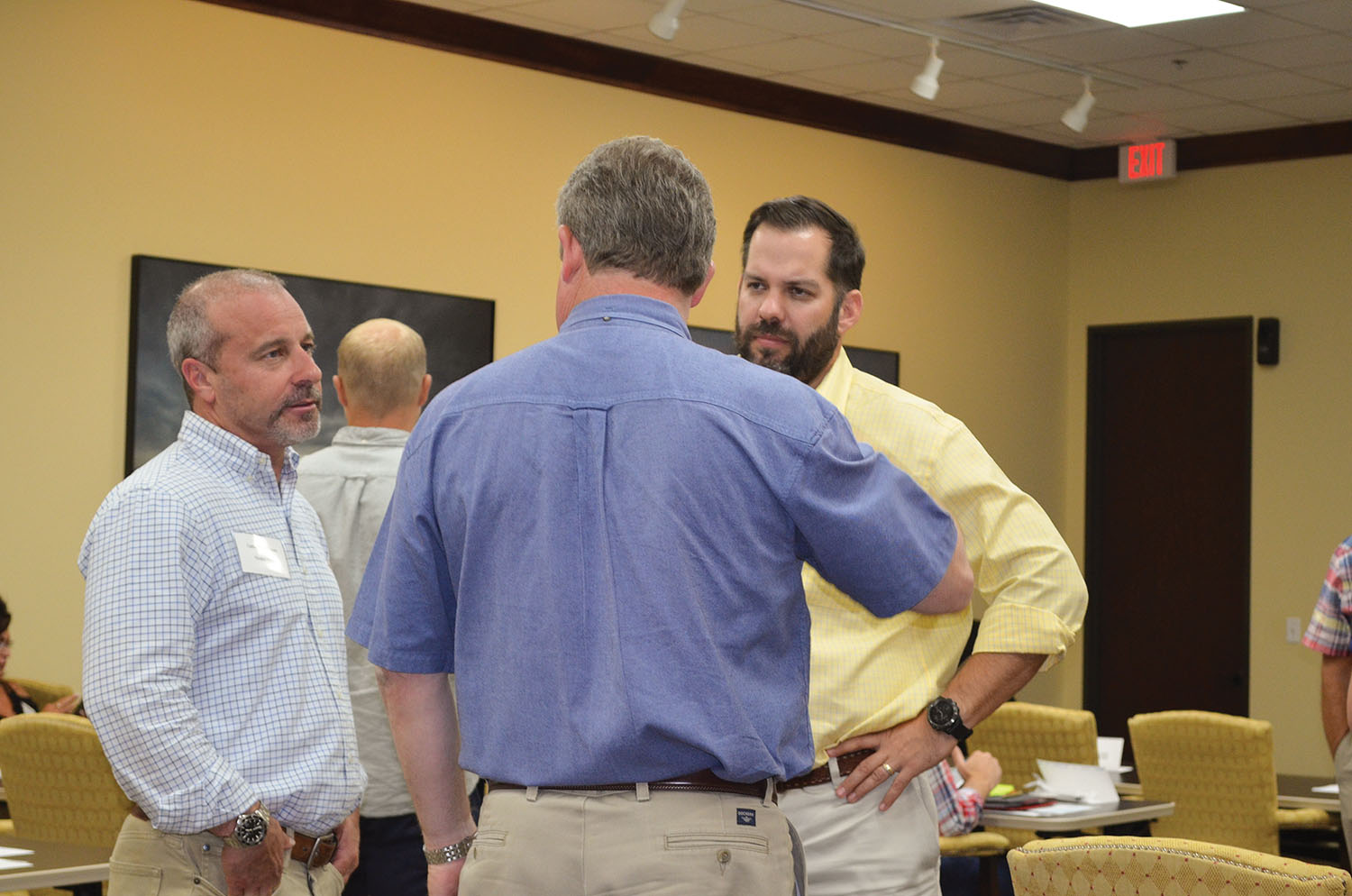 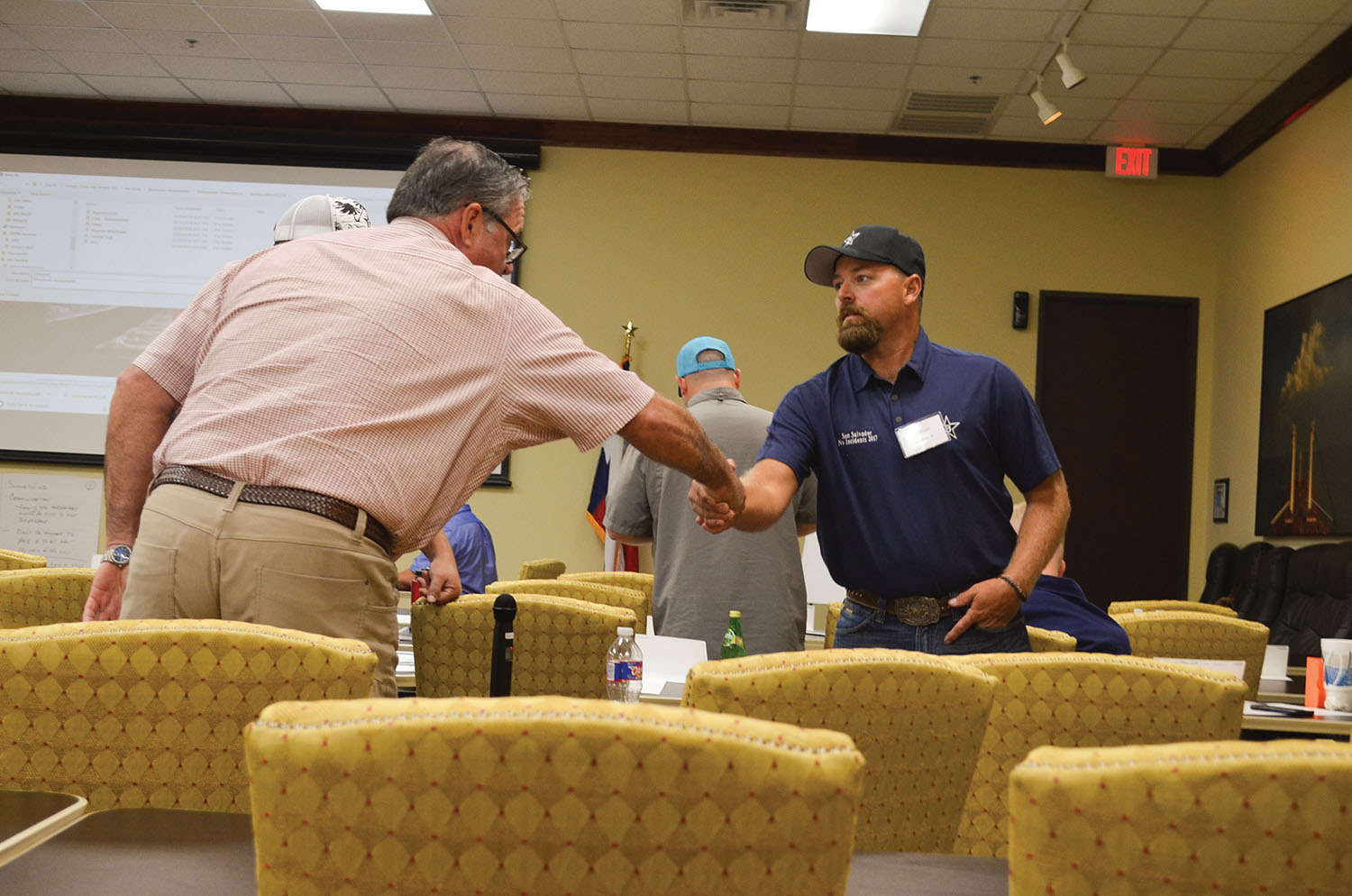 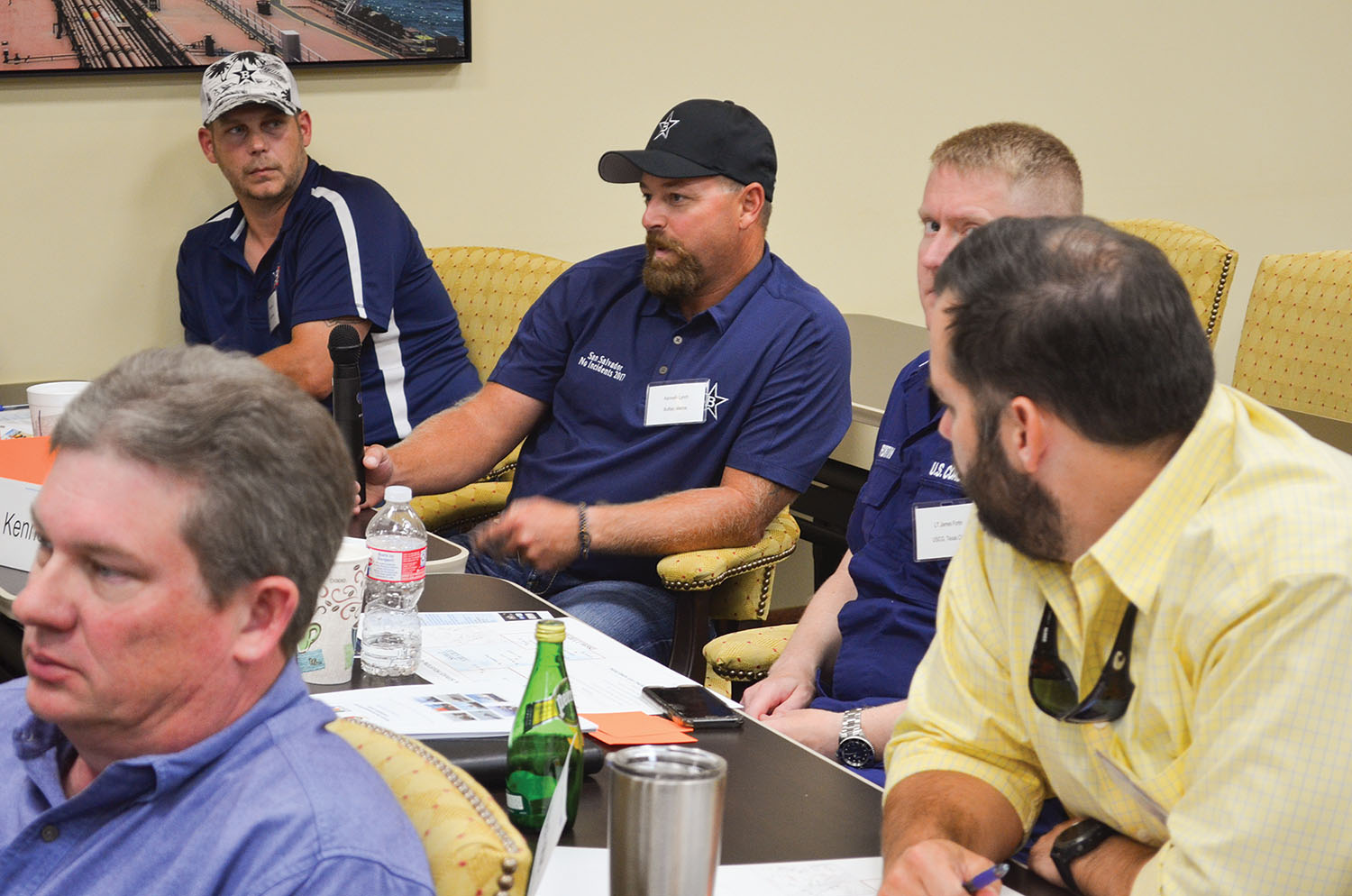 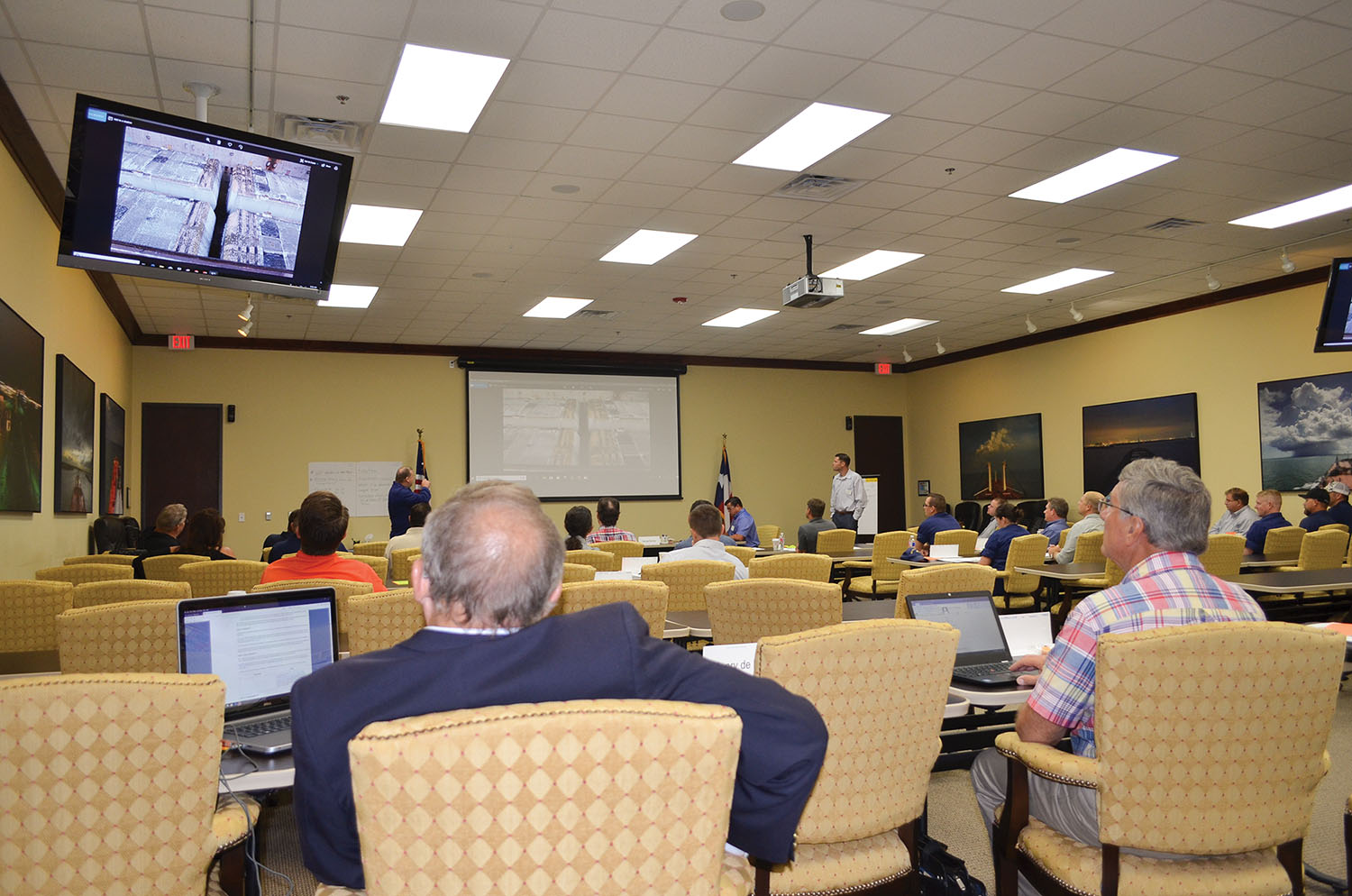