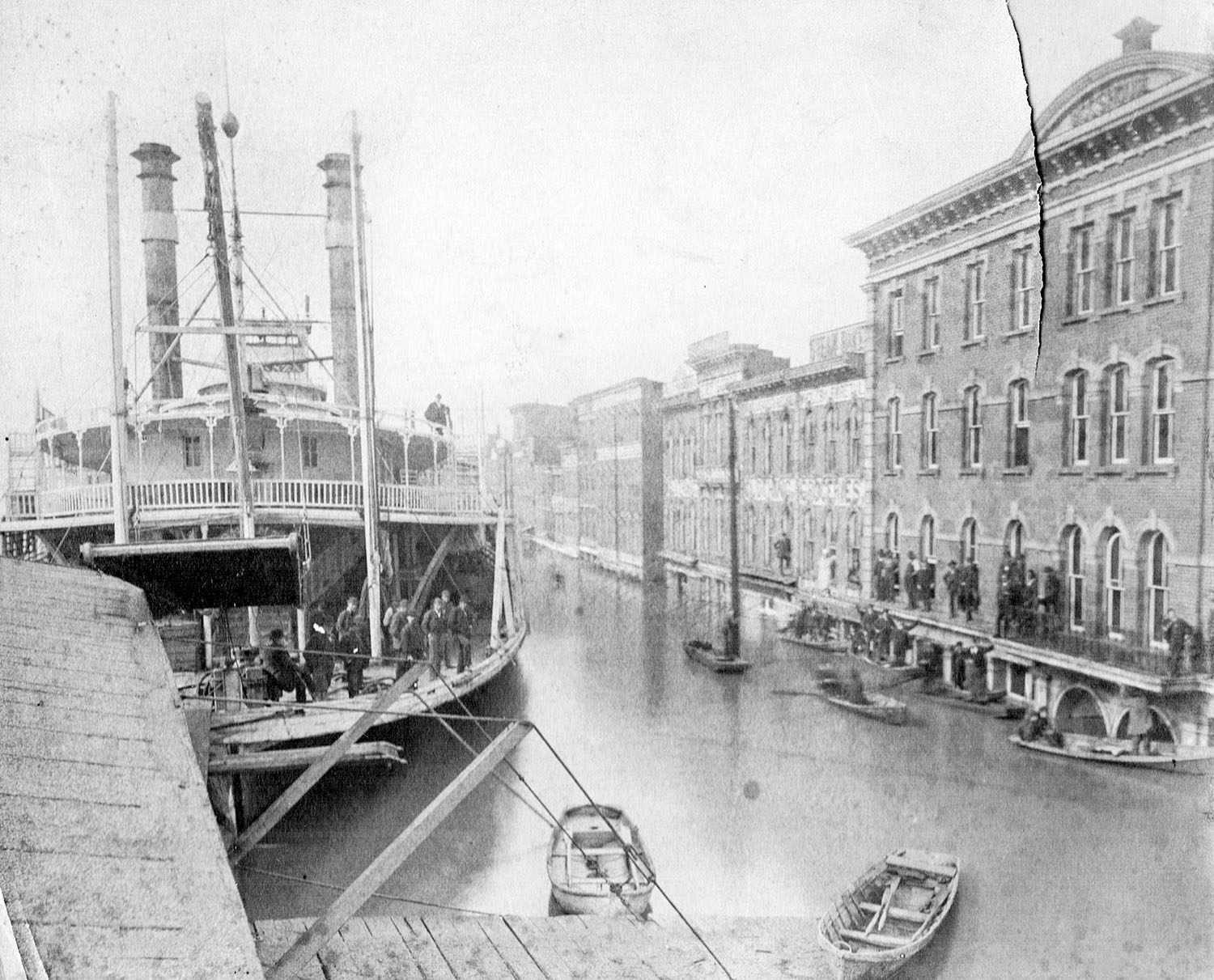 This week, the Old Boat Column presents an image that is a recent acquisition to this curator’s collection.

The first of two successively-built sidewheelers named Bonanza, the steamboat was built at Madison, Ind., in 1876, with the boilers and other machinery installed at the Moore shop in Portsmouth, Ohio. The wooden hull was 265 feet in length by 43 feet in width, with a depth of 7 feet.

Capt. E.B. Moore was the first master and was in command when the vessel made its initial trip on June 19, 1876, replacing the St. James. Duvall Young presided over the clerk’s office.

While substituting for the packet Fleetwood, the boat ran aground above Portsmouth on August 8, 1877, remaining there until October 11. To this day, the bar (originally named Funk’s Gut) has been known as Bonanza Bar.

A streak of bad luck plagued the riverboat. Only a scant two days after gaining freedom from the sandbar siege, the Bonanza collided with the sternwheel packet W.P. Thompson just above Maysville, Ky. Both boats sustained serious damage, but were successfully landed with no injuries to passengers or crew. After an investigation, the Steamboat Inspection Service suspended the license of both pilots for a brief period.

In 1884, the Bonanza was laid up at Cincinnati for nearly four months due to low water. On September 20, 1884, the sidewheeler Morning Mail, which was tied up in close proximity, caught fire; the blaze quickly spread to the Bonanza, destroying both vessels. Also involved in the conflagration was the U.S. Lighthouse Service tender Lily, which was rebuilt and returned to service. When the river rose, many crew members from the Bonanza secured employment aboard the Andy Baum.

Looking much like its predecessor and also designed to run in the Cincinnati-Portsmouth trade, the second Bonanza was constructed at the Mack yard in Cincinnati and was launched on January 17, 1885. The boilers and engines were new, but other haberdashery, including the paddlewheel cranks, pitmans and the whistle (originally from the packet St. James) were recycled from the earlier vessel of the same name. On the forward cabin bulkhead was a large mural-sized painting of Portsmouth, done by artist Scott Hummel.

Built on a wooden hull measuring 267 feet in length by 42.8 feet in width, the second Bonanza ran its trial trip on April 28, 1885. The White Collar Line ran the riverboat in the Cincinnati-Portsmouth trade, later extending the run to Pomeroy. In the spring of 1889 the steamboat offered an excursion to East Liverpool, Ohio; round trips were also made between Cincinnati and Memphis, hauling baled cotton, cottonseed meal and livestock.

Capt. J.T. Campbell was master of the steamer in 1891, succeeded by Capt. Julian Davey, who had served as clerk and purser on the first Bonanza.

The White Collar Line sold its rights for upriver trade to Greene Line Steamers in 1904, following which the Bonanza became a spare, being utilized only for special trips and forays to Memphis. The big sidewheeler was dismantled at the Cincinnati waterfront in the spring of 1909. The whistle was moved to the City of Cincinnati and later to the Cincinnati, which eventually became the Streckfus excursion steamer President.

Caption for photo: The steamer Bonanza at the Portsmouth Ohio waterfront during the 1884 flood. (Keith Norrington collection)