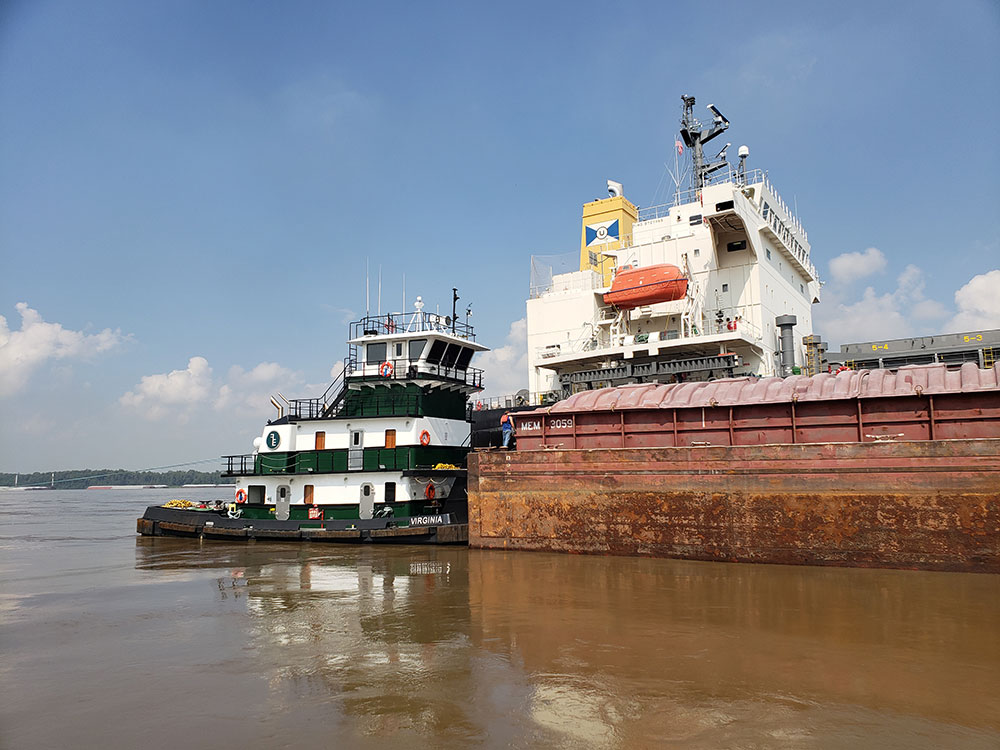 Plimsoll Marine, which operates 19 towboats that offer fleeting and shifting services for Cooper Consolidated between Baton Rouge, La., and Head of Passes on the Lower Mississippi River, recently took delivery of the second in a three-vessel series from Blakeley BoatWorks of Mobile, Ala. All three companies—Plimsoll Marine, Blakeley BoatWorks and Cooper Consolidated—are part of the Cooper Group of companies.

Blakeley BoatWorks delivered the mv. Virginia to Plimsoll Marine in August 2018, with the mv. Barbara delivered February 5. According to Blakeley and Plimsoll, a third towboat, the mv. Joanne C, is expected by this summer. All three are the same design, measuring 70 feet by 28 feet, with a molded depth of 10 feet and a draft of 8 feet. Farrell & Norton Naval Architects produced the design.

The mv. Virginia stands out as a first, not only for Plimsoll and Blakeley, but for the inland waterways as well. According to Blakeley and Plimsoll, the Virginia is the first towboat to receive a new vessel Certificate of Inspection (COI) since the implementation of 46 CFR Subchapter M. The keel for the Virginia was laid after the July 20, 2017, start date described in Subchapter M pertaining to new construction. The vessel was completed last August and received its new vessel COI on August 24, 2018.

“The Blakeley BoatWorks team is proud to have constructed our nation’s first new inland towing vessel to receive a COI,” said Tim Mire, managing director of Blakeley BoatWorks. “Our customers expect that their new vessels will meet our industry’s highest levels of compliance requirements, and we certainly met those high expectations when we delivered the Virginia.”

Erik Cooper, executive director for Cooper Consolidated, which provides stevedoring, barge, marine and logistics services from Baton Rouge south, praised the safety and strength the Virginia brings to the company’s area of operation.

“We’re proud of the work Blakeley BoatWorks has done and have high expectations for the Virginia as it begins service in the Cooper Consolidated fleet,” Cooper said. “Our customers and employees now have the added satisfaction, pride and peace of mind knowing that our fleet is home to one of the industry’s safest and most capable vessels.”

Gonzales said the Virginia, Barbara and Joanne C will all replace older vessels of the same names.

The mv. Virginia has tankage capacities for 22,000 gallons of fuel, 5,200 gallons of potable water, 150 gallons of hydraulic oil and 660 gallons of slop oil. The vessel also has accommodations for six crew members.

Fendering aboard the Virginia is by Schuyler Companies. The vessel also features paint from Sherwin Williams, gridcoolers from Fernstrum, and two Wintech 40-ton deck winches. The vessel’s switchboard is by RIO Controls & Hydraulics, while its radar, AIS, bridge alarm system, GPS and transducer are from Furuno. The Virginia features a loud hailer and VHF radio from Standard, a compass from Ritchie Navigation, and a wind meter from Davis Instruments.

Blakeley BoatWorks, located on the Mobile River just north of Interstate 10, covers 26 acres and features a 1,900-short-ton-capacity floating drydock and a 660-short-ton Travelift. The shipyard offers scheduled maintenance, emergency repairs and service, both onsite in Mobile and offsite. The shipyard includes four covered fabrication shops and can accommodate up to 15 vessels at a time.