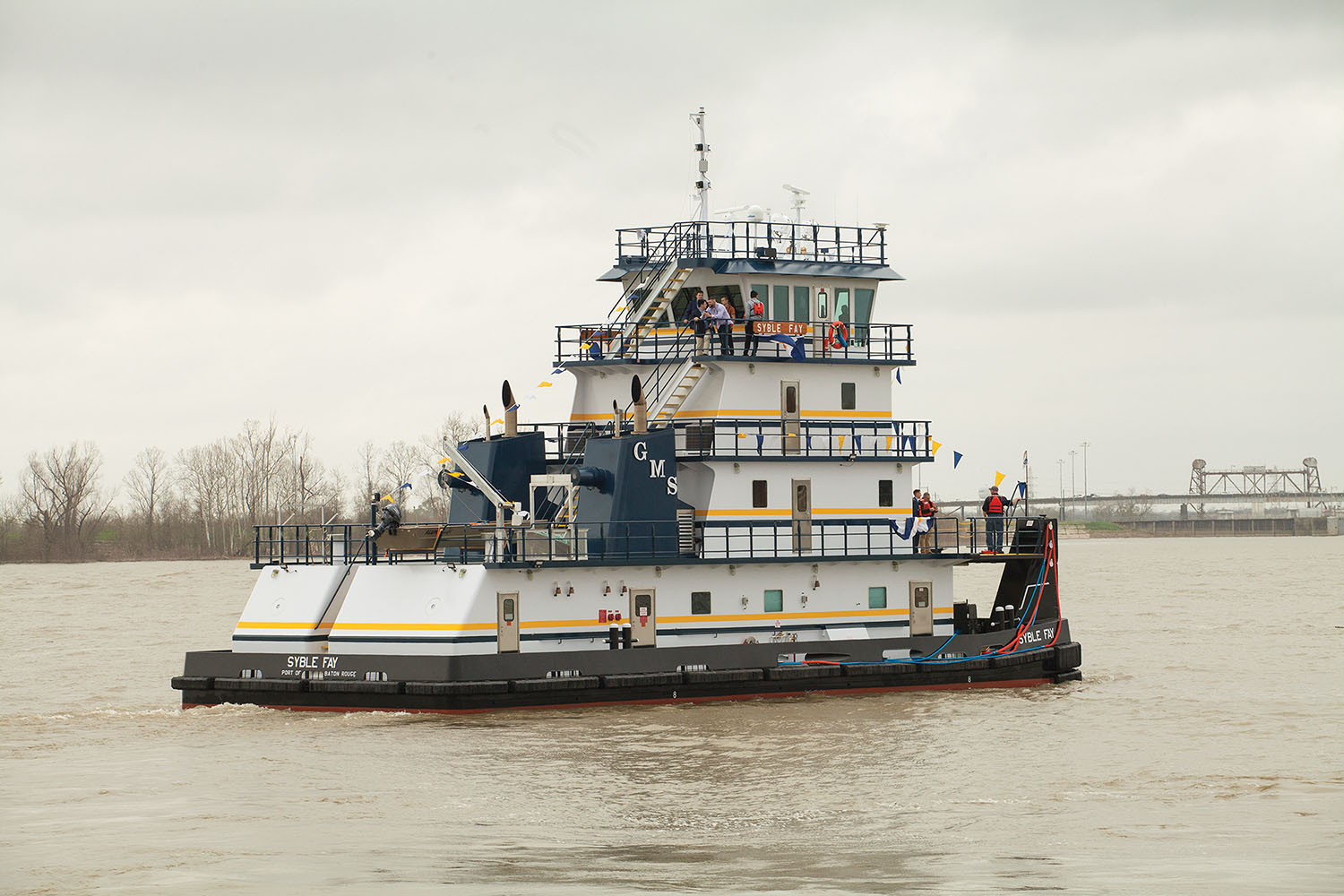 GMS currently has 11 red-flag tank barges. The company specializes in the transportation of refined, black oil and petrochemical products and agricultural fertilizers throughout the inland waterways.

The christening ceremony celebrated not only the new vessel but also the rapid growth of GMS, which is barely three years old.

Moore founded GMS in January 2016 with one leased towboat and two leased barges, but the road that led him to GMS began when he was just a boy on a farm. Moore is a native of Mayersville, Miss., a small town in the state’s Mississippi Delta region. His father was a farmer, while his mother stayed home to raise him and his four siblings: Gary Moore, Michael Moore, Terri Patterson and Tonia Rolland.

“She was the heart and soul of our family,” Moore said of his mother, who died in 2012. “She held our family together.”

Moore, whose home was little more than a stone’s throw from the Mississippi River, said he can remember watching towboats pass and hearing river sounds in the distance.

When it came time for college, though, Moore chose to study agriculture at Mississippi State University, with plans of coming home to the farm after graduation. His plans changed, however, when his dad retired and the landowner sold the farm. Fortunately the landowner, who’d already paid for Moore’s college education, had a surprise in store for him. While he couldn’t offer Moore a job on the farm, he’d found a job for Moore in nearby Greenville, Miss., at Mississippi Marine Corporation shipyard. Moore started there in 1988.

“I started out cleaning barges and went on to be a welder, fitter and a foreman before I left,” Moore said.

Moore said his time at Mississippi Marine was invaluable, because it taught him the ins and outs of vessel and barge maintenance—crucial knowledge for him now as an owner-operator. In 1992, he left the shipyard, and for the next 23 years, he worked for other towing companies, first in river operations and then in sales. That breadth of experience—maintenance, ops and sales—laid a strong foundation for GMS.

Looking back over the path that led him to GMS, Moore said it hasn’t always been smooth-going.

“Admittedly, there were a couple moments through my life I did not think it would ever happen,” Moore said. “I will say this, that God honors his promises and our dreams if we are putting him first along with the necessary work and commitment that it takes.”

Besides faith and determination, Moore also stressed the importance of relationships.

“It’s relationship with customers, friends and vendors that’s helped us get where we are today,” Moore said. “Some believe this is a commodities-based business, but I still believe it’s all about relationships.”

Moore said the same is true within the company, calling the company’s employees “our most valuable assets.”

There’s also a strong family dynamic at GMS. Moore’s older son, Mason, is already connected to the company, as is Dillon Wang, who Moore called an adopted member of the family.

“They’re both in college and will fill a role when they finish,” he said.

Moore said he definitely wants to see GMS continue to grow—just not too much.

“Our goal is to always operate a small business, so we can remain family-oriented,” he said. “I don’t want to grow much bigger than what we are now. That sense of family is key for our company.”

The Syble Fay has five staterooms, including the standalone captain’s quarters located on the vessel’s “texas deck,” along with three and a half bathrooms.

The layout and design aboard the Syble Fay is what truly distinguishes the vessel from others at work on the inland waterways.

Mazeika noted that the boat offers easy access for any kind of maintenance the crew may need to do, from pulling wires to plumbing and the HVAC system.

“They laid it out simple, and the best thing about it is you can work on it without tearing the walls up,” Mazeika said. “They gave us access where we need it.”

The Syble Fay features a large galley and eating area, with an adjacent crew lounge. The Syble Fay’s exercise room is located toward the stern, above the engineroom, with a dedicated air conditioning system and television.

“Every time I get on it, I’m impressed,” Mazeika said.

The Syble Fay is a larger sister ship to the mv. Angele Renee, which has a similar design and is named for Moore’s wife.

The christening ceremony for the Syble Fay featured speeches from Moore family members, GMS employees, customers and supporters. Among the speakers was Mazeika, who has known Moore for around 18 years and previously worked for him at another towing company. Mazeika told the crowd what Moore said to him when he agreed to join GMS not too long after the company was started.

“Gene said, ‘Johnny, I appreciate you coming over and taking a chance,’” Mazeika recalled. “Well, I never took a chance. You took the chance on me.”

Moore’s brother, Gary, offered a prayer for the company, vessel and crew. Moore’s son, Mason, praised his dad for his hard work and determination to achieve his long-held dream.

“Being here today, seeing how everything has come together, I’m not only proud to call you my dad but my boss,” Mason Moore said. “It’s been an honor to work by your side these past three years.”

Aboard the vessel, Pastor Russ Cripps from Acacia Church in Baton Rouge offered a prayer of blessing for the Syble Fay and its crew. Moore’s younger son, Preston, presented Mazeika with the ship’s Bible. Then Angela Moore broke a bottle of champagne over the starboard push knee of the Syble Fay to officially christen it into the GMS fleet.

For more photos, see the slideshow below (all photos by Frank McCormack): 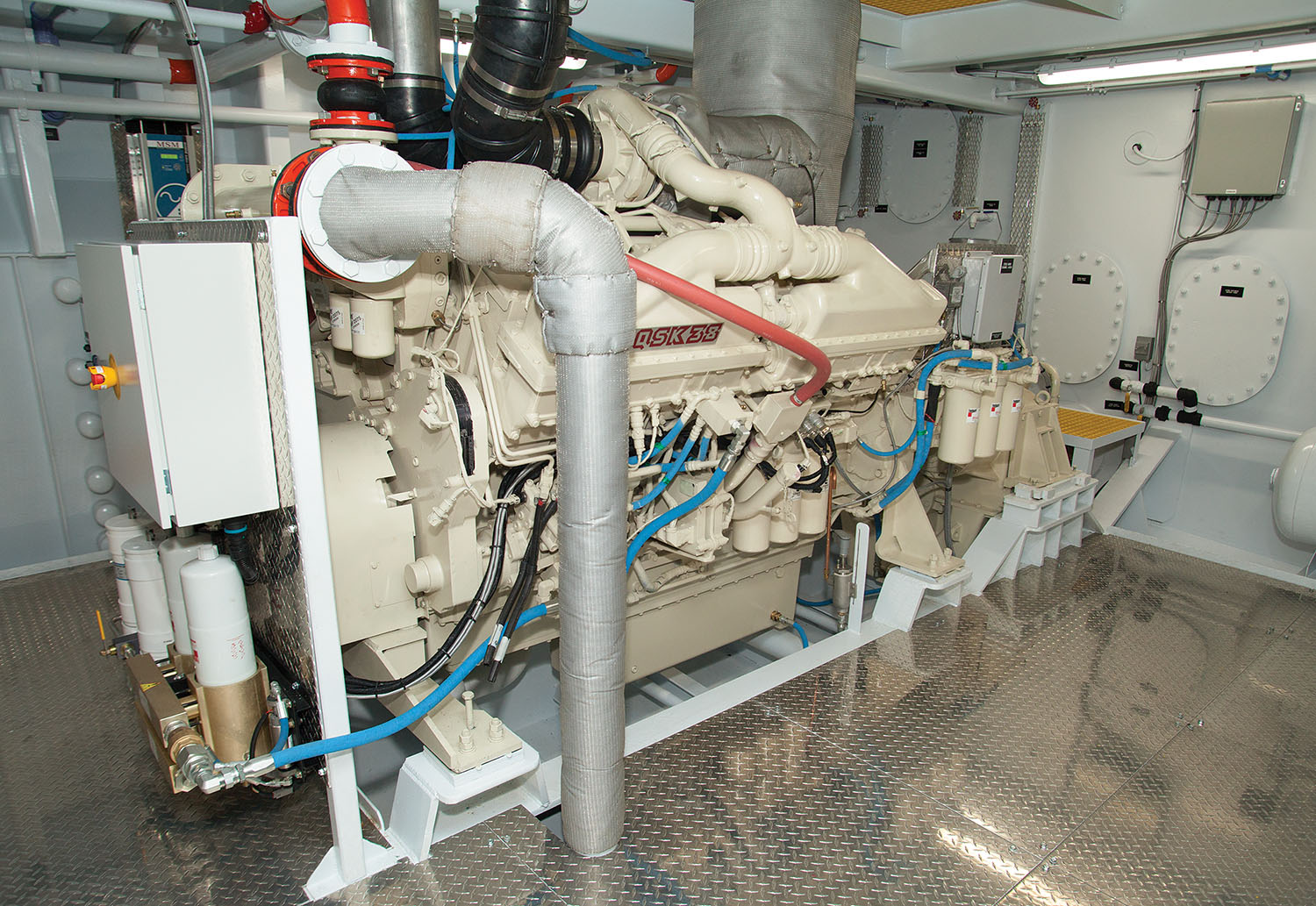 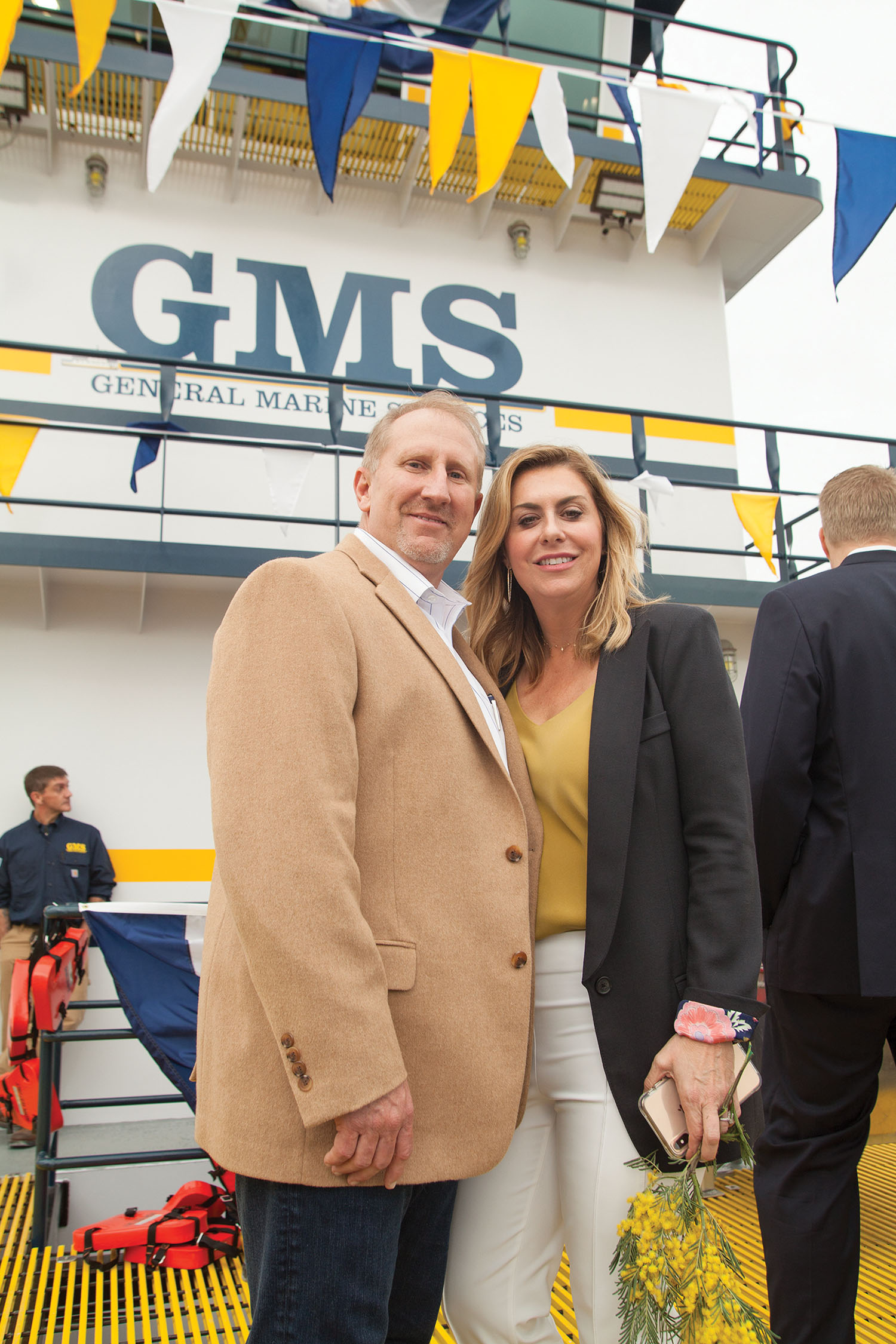 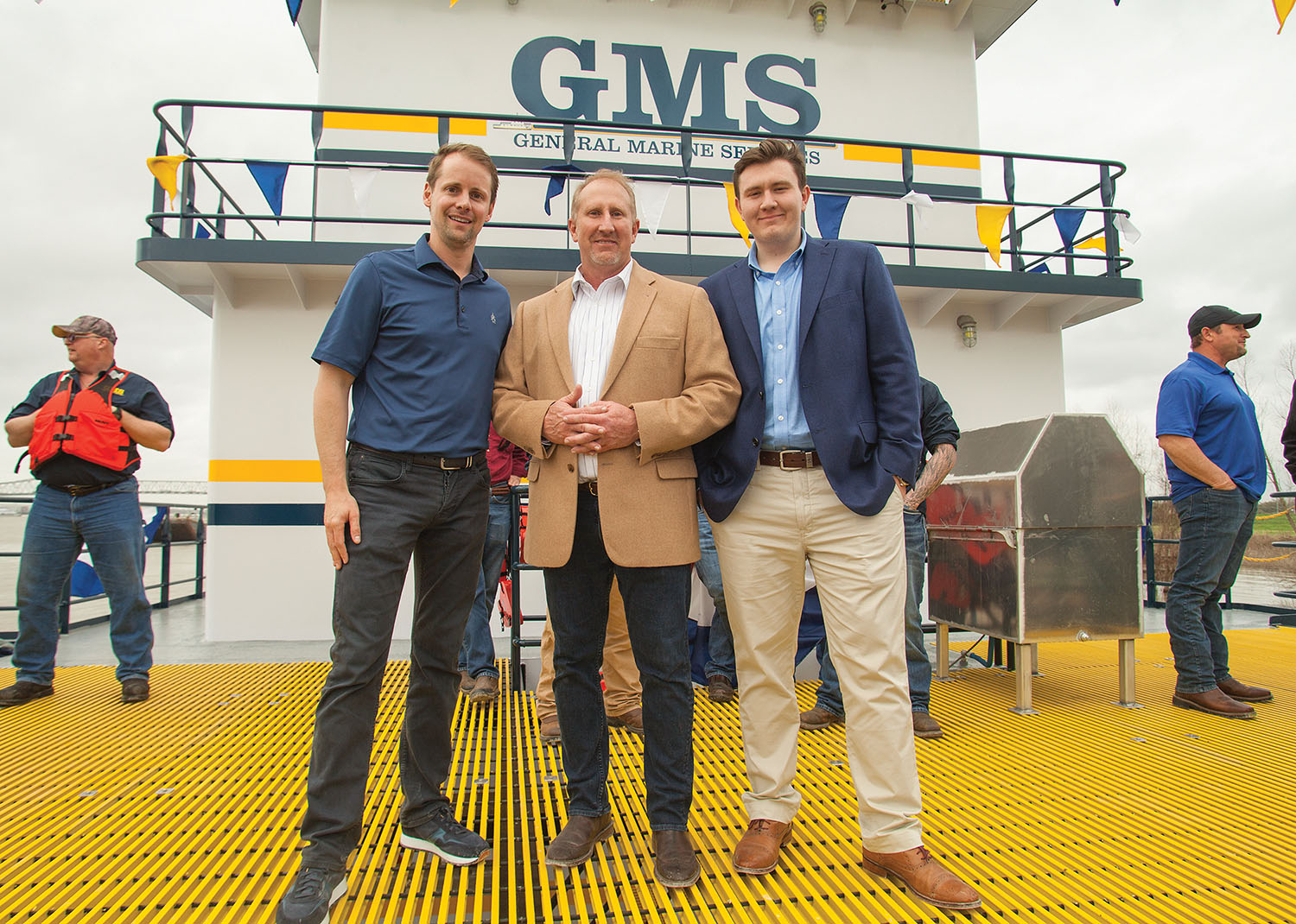 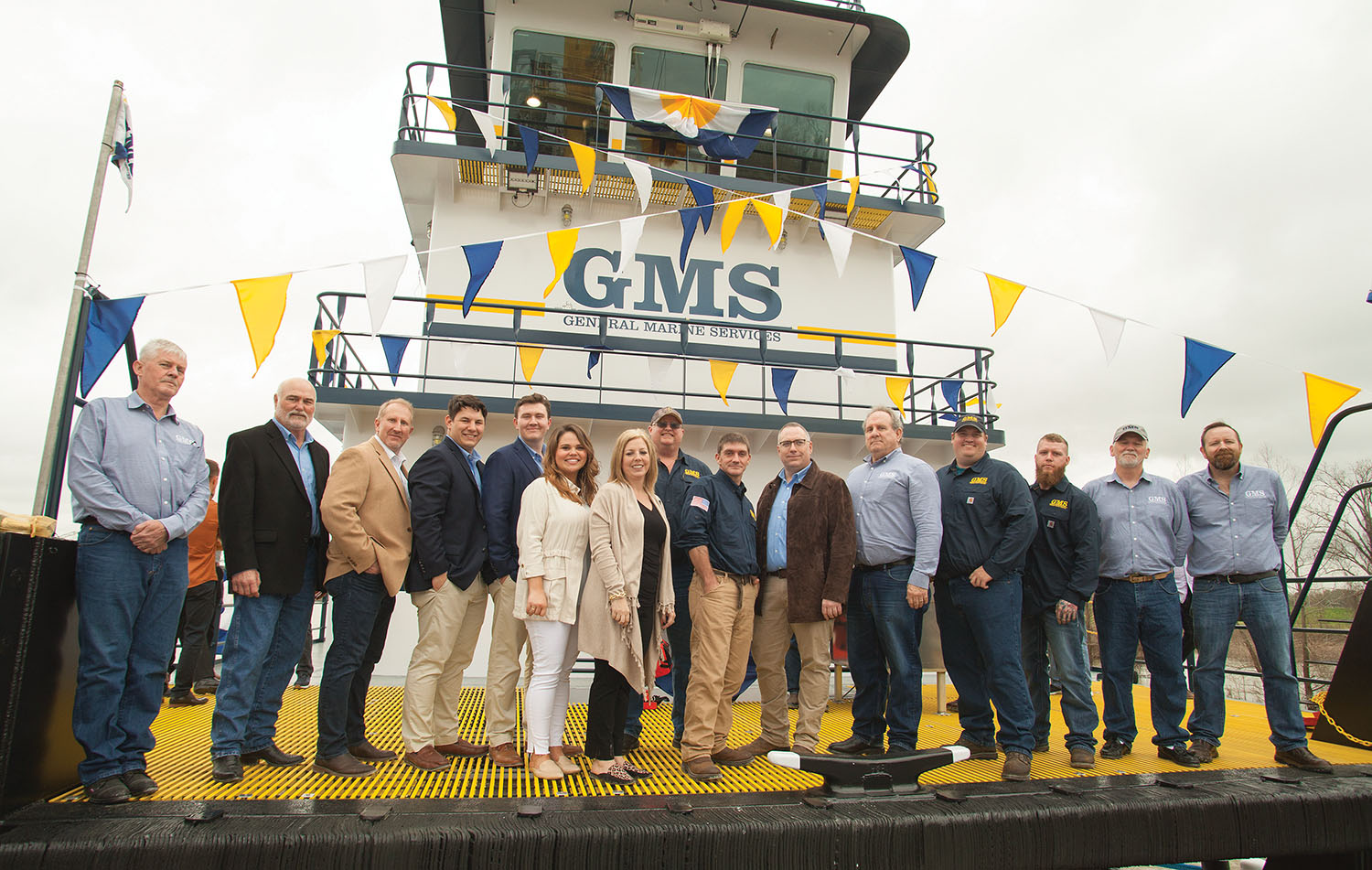 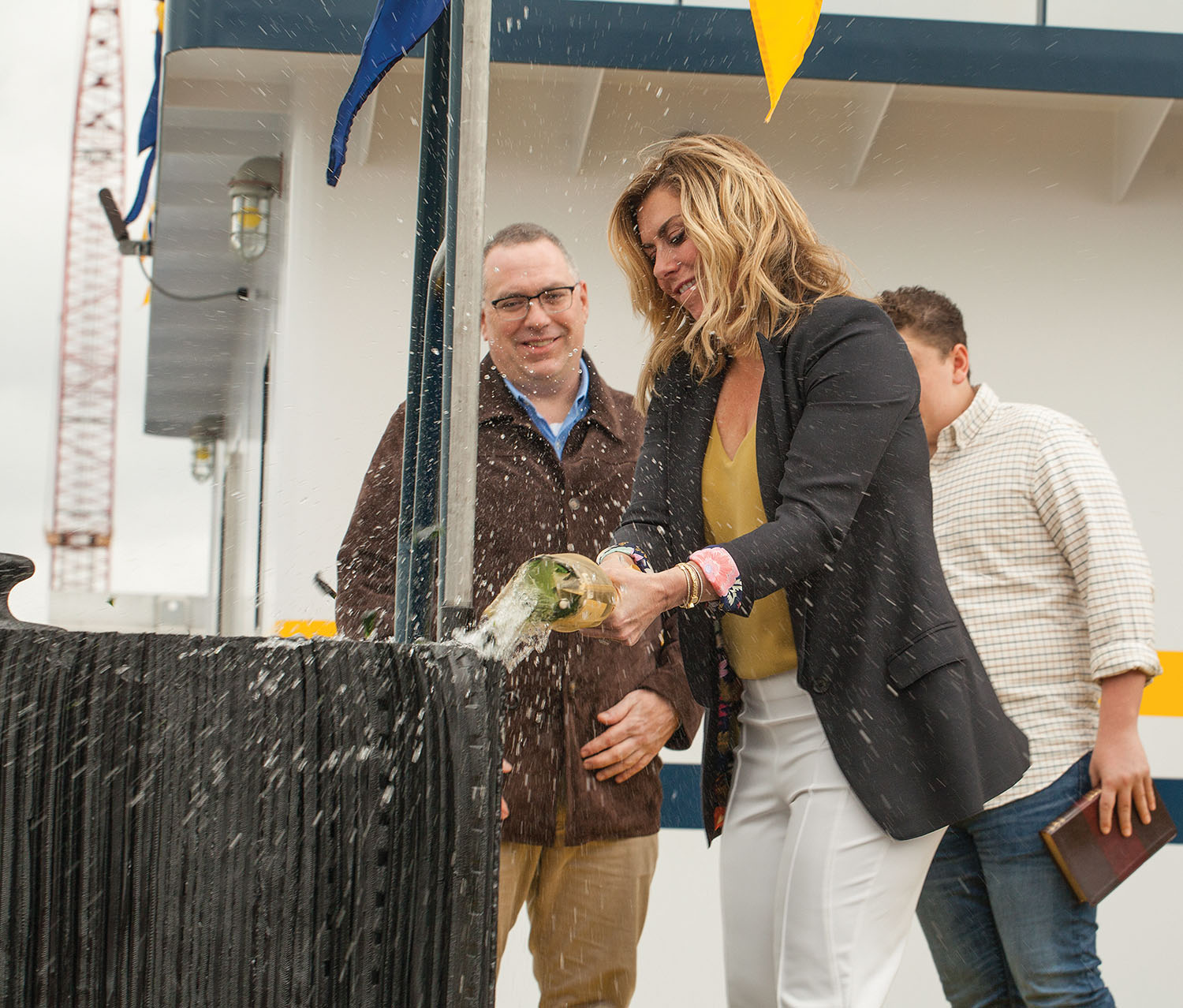 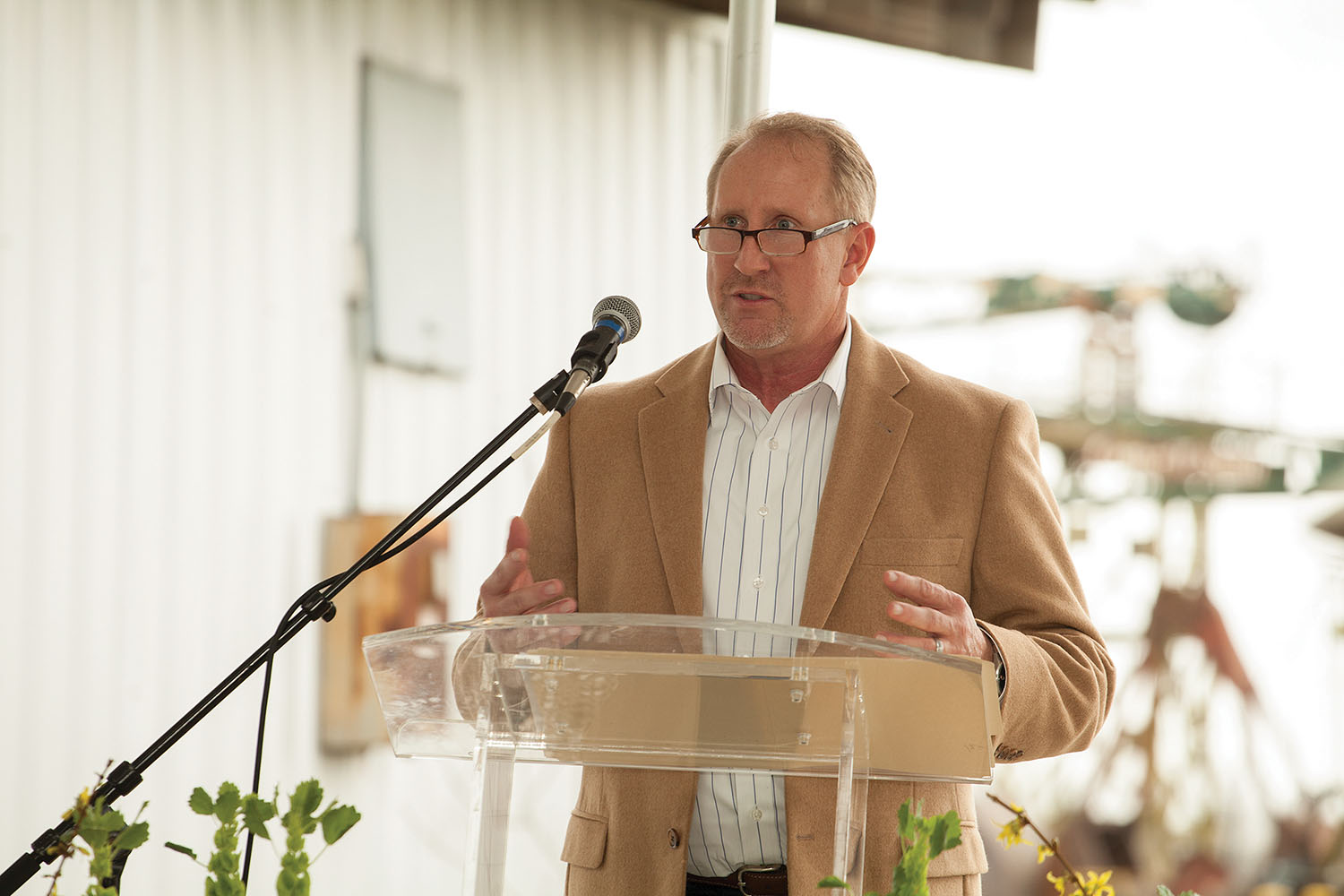 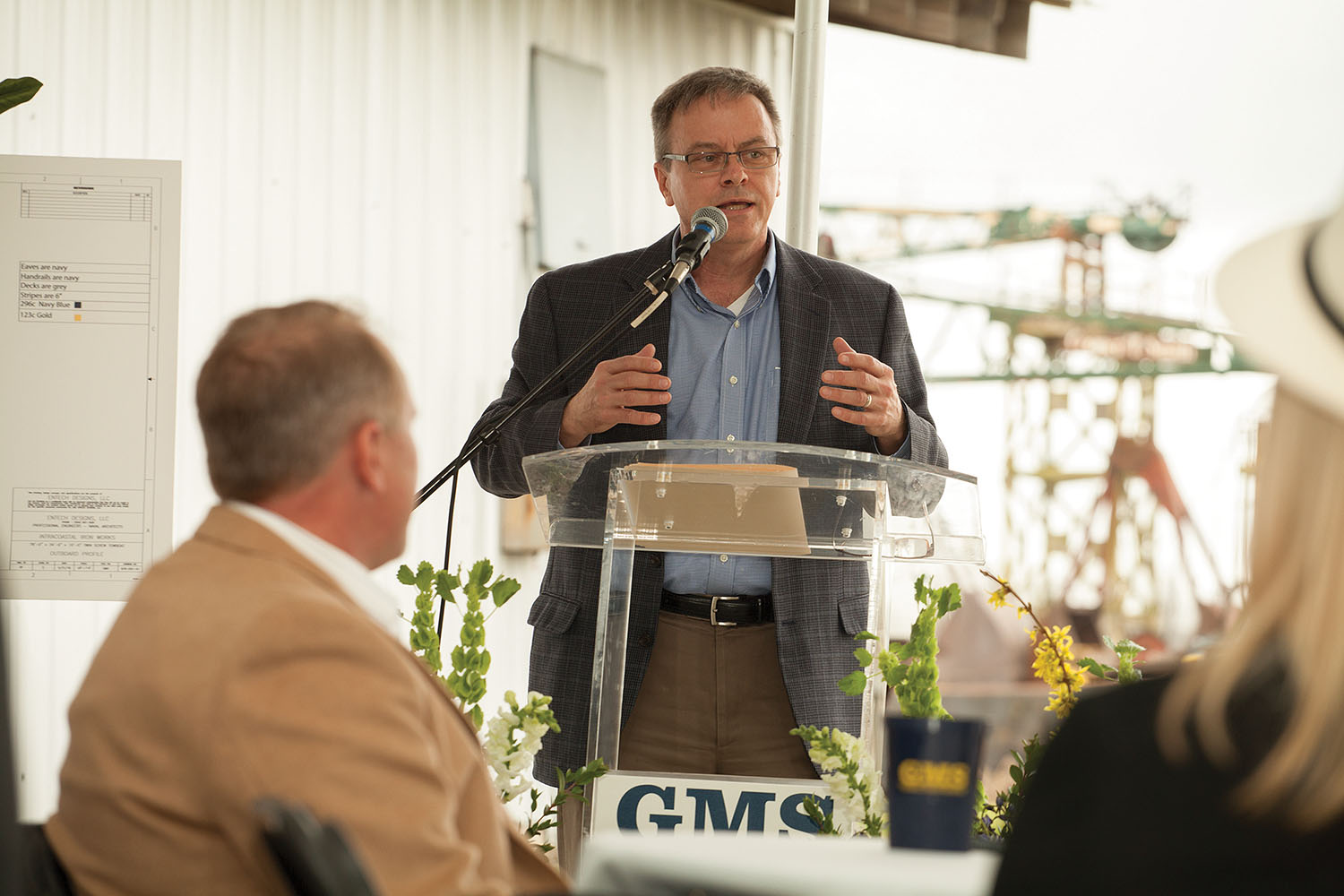 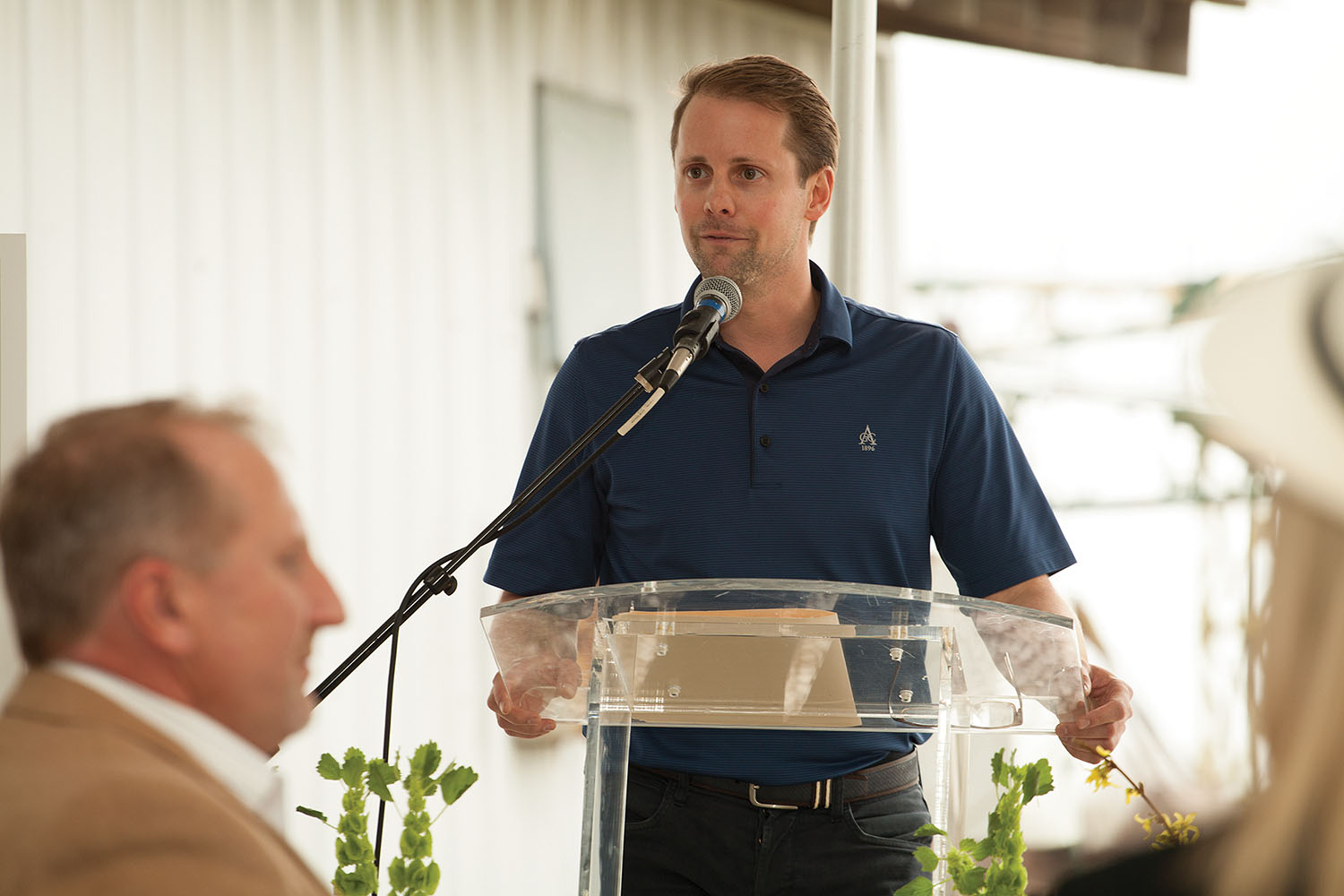 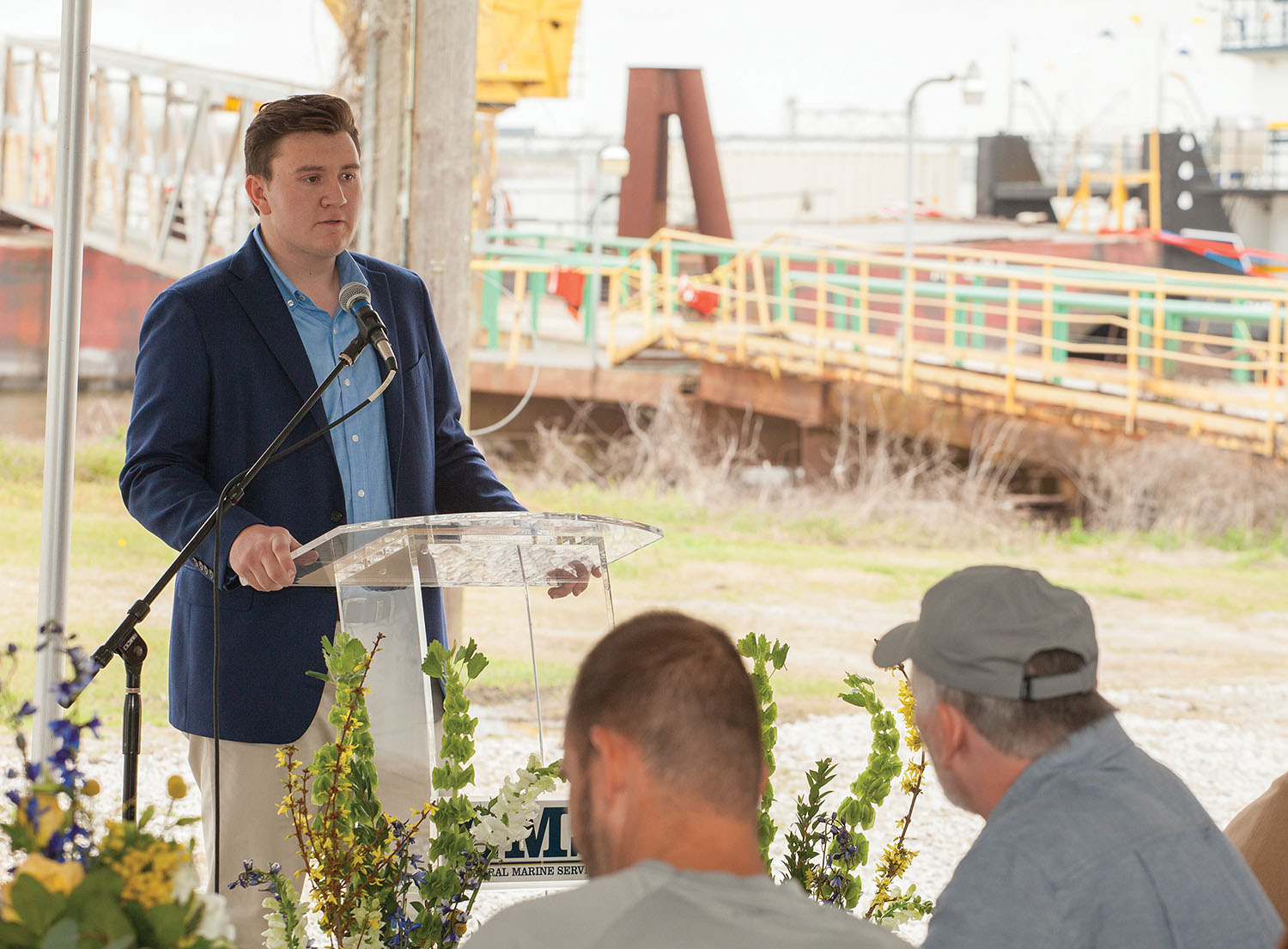 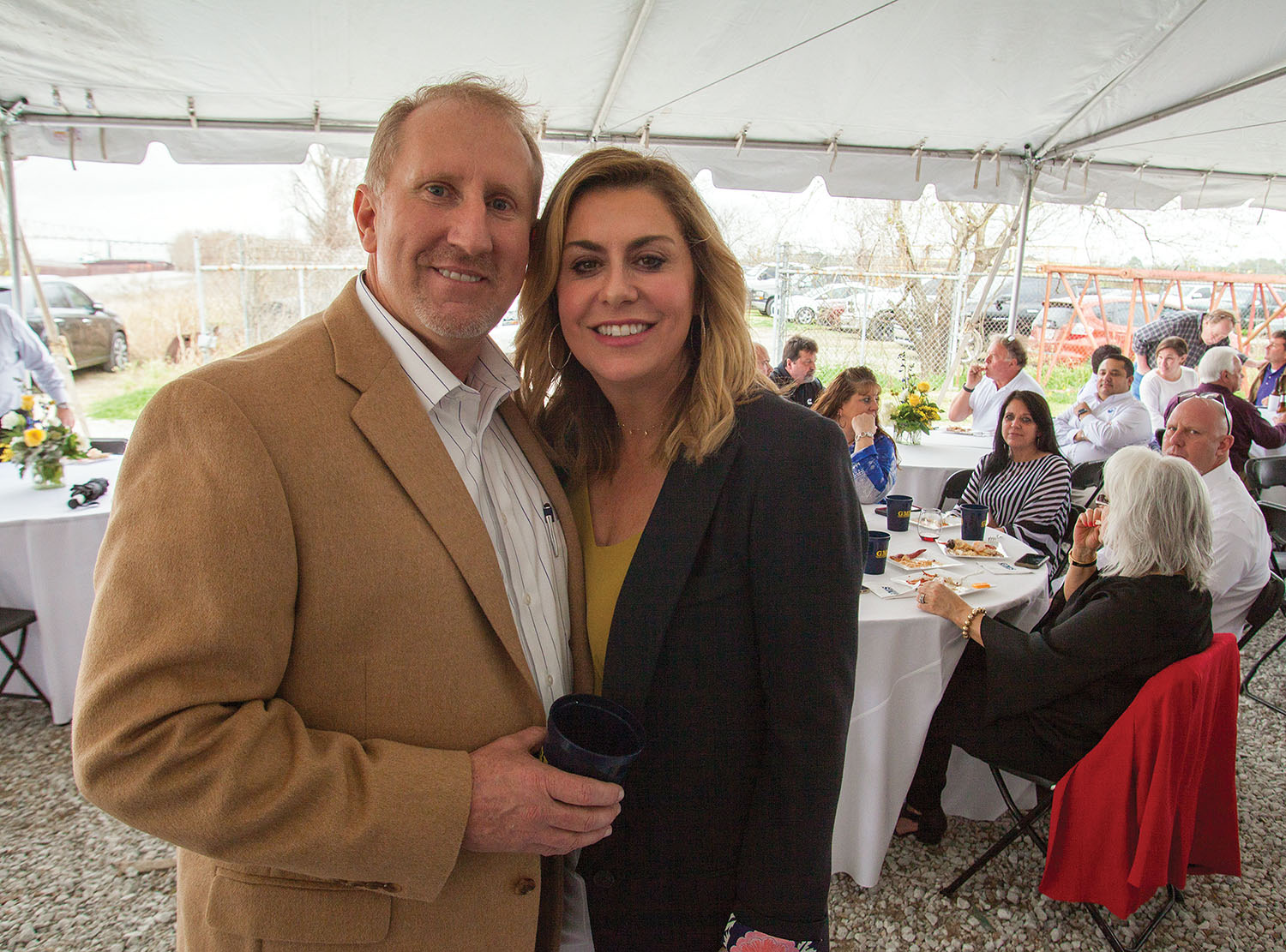 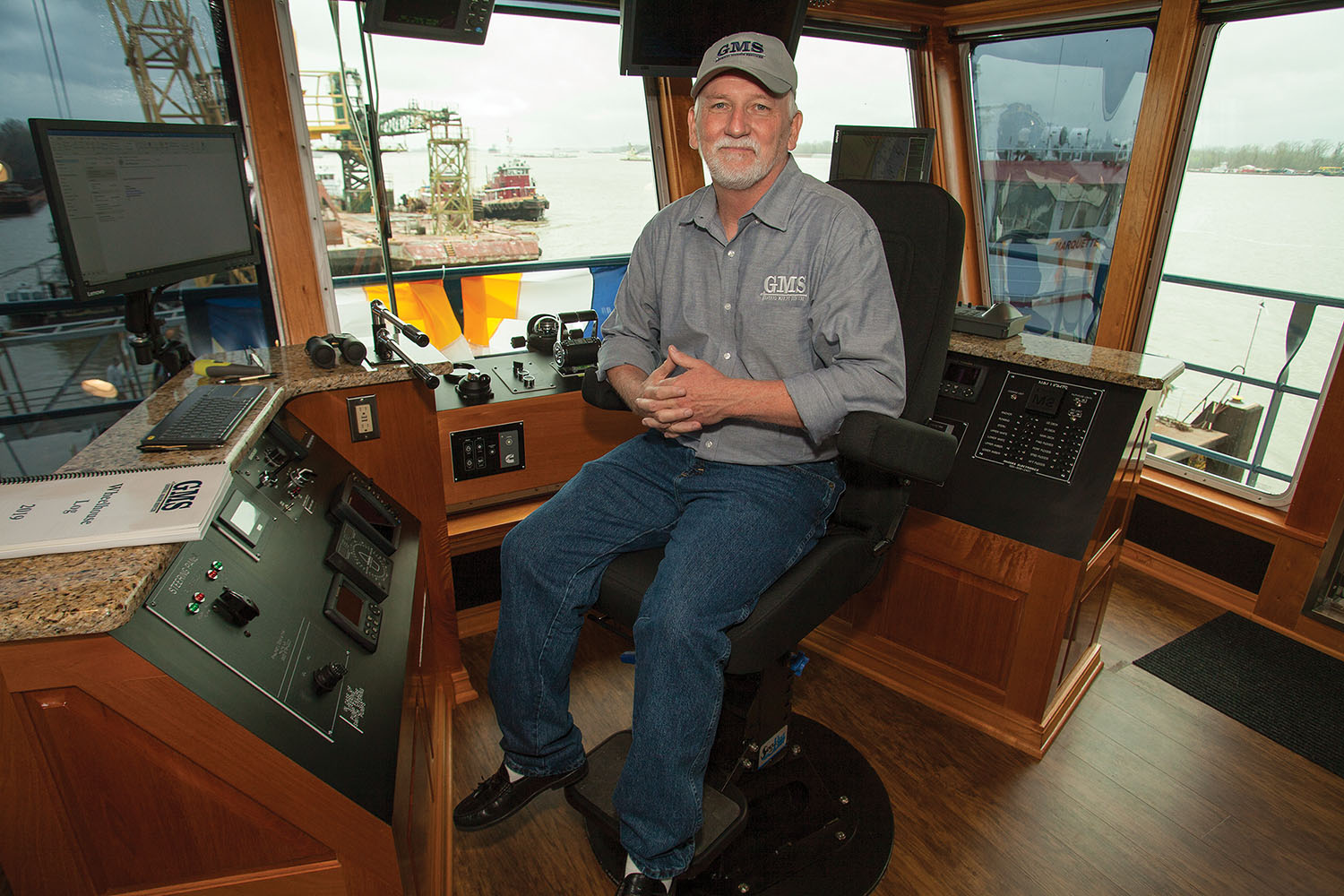 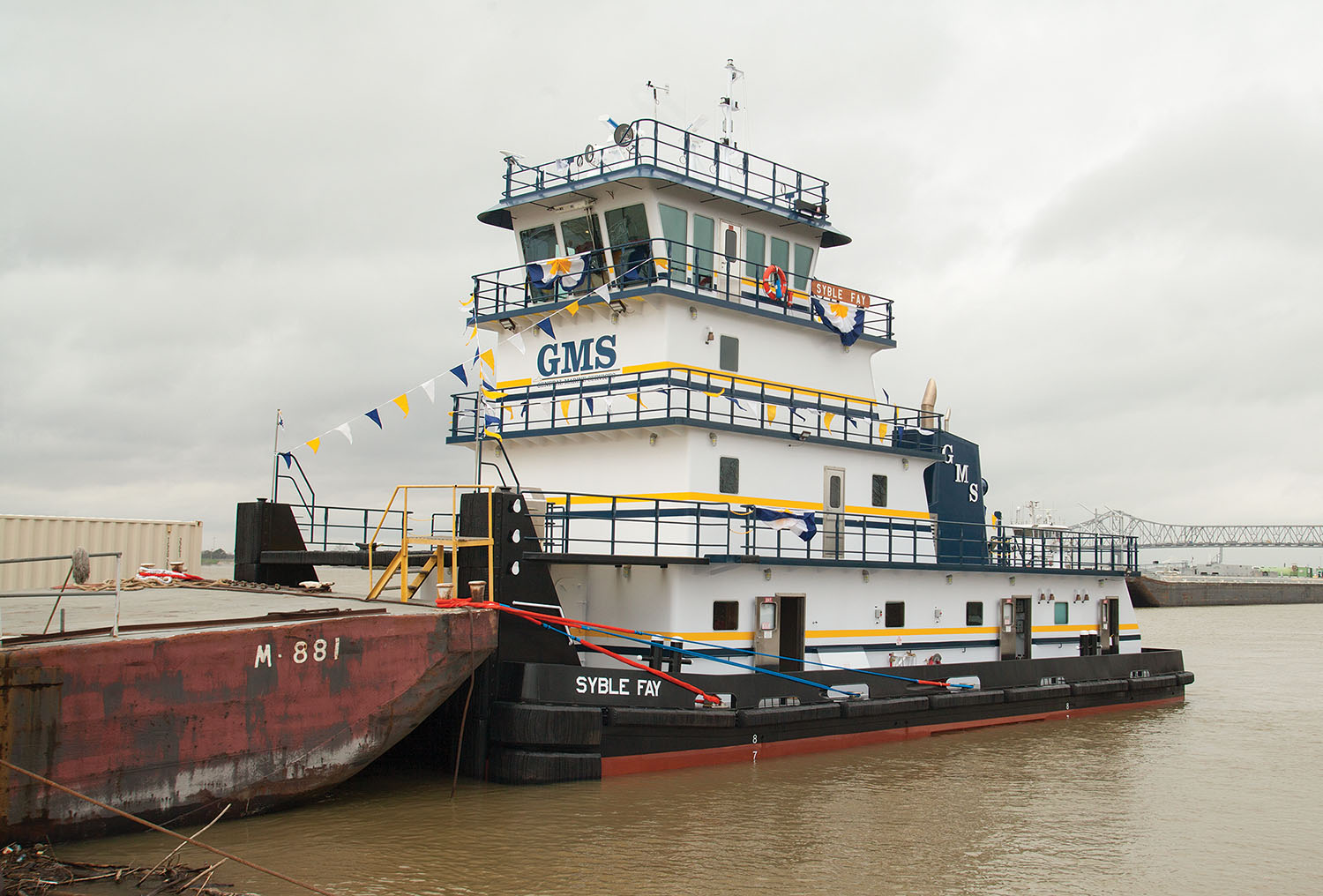