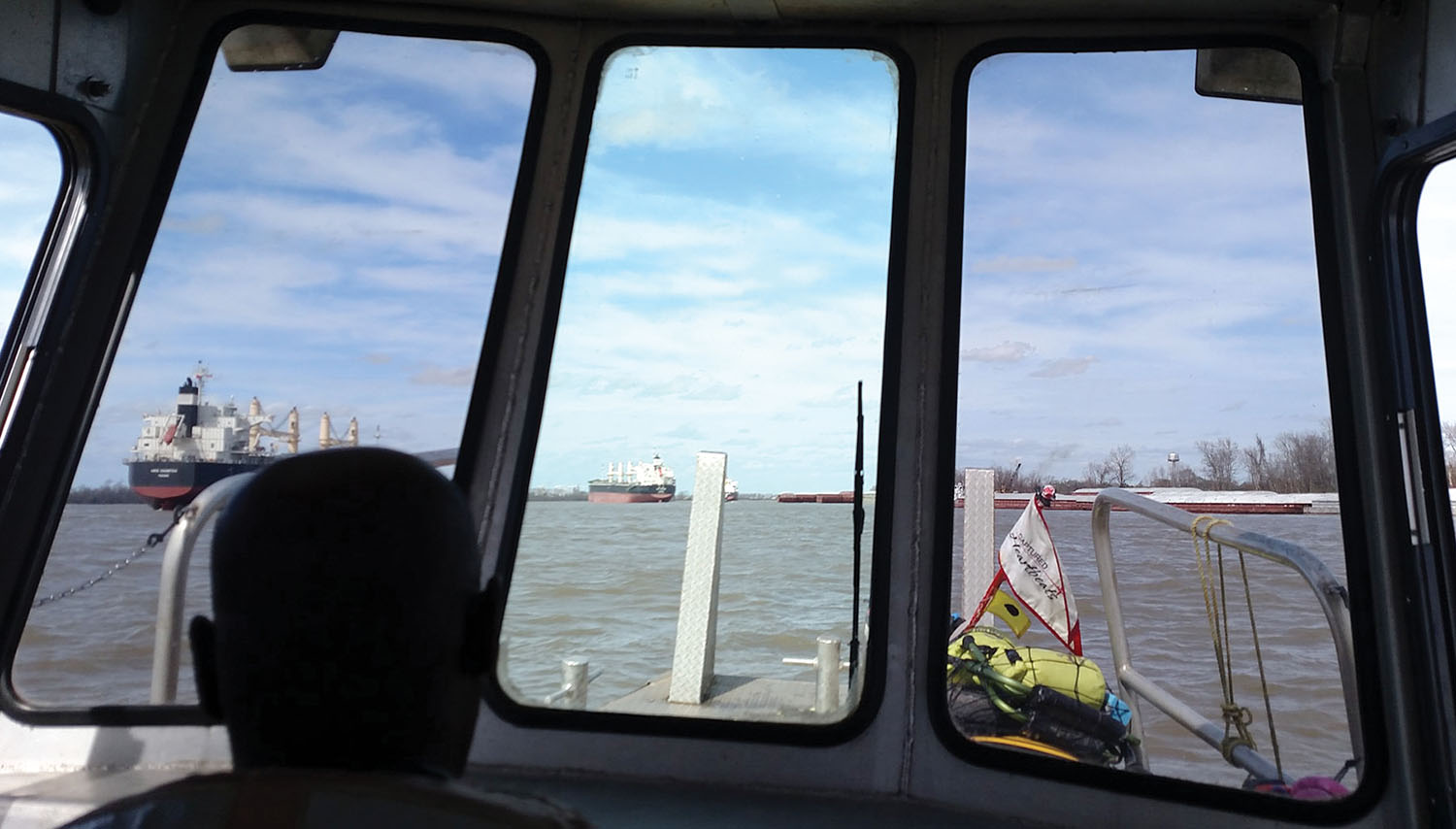 Over the past three years, Rich Brand has logged thousands of river miles aboard his kayak as he pursues his goal of paddling the Great Loop, a trip that connects the Great Lakes, Mississippi River system, and the Gulf and Atlantic Intracoastal Waterways.

But his endeavor could have come to a tragic end February 14 on the Lower Mississippi River near Convent, La., had it not been for a pair of fleet mates at Cooper Consolidated’s Mile 164 Fleet and the crew aboard Marquette’s mv. Mary Kay. Brand was headed downriver near the right descending bank and was attempting to paddle around the Mary Kay and its tow. The current pushed Brand’s kayak into a barge, and the kayak capsized.

The crew aboard the Mary Kay saw what happened and quickly went to his aid.

“No sooner than I had passed this Mary Kay boat, the captain had gotten his crew and they’re rushing out the back door,” Brand said in a video posted to Facebook. “They’re putting their life vests on and are moving and are getting ready to get the skiff boat launched into the water.”

The Marquette crew caught up with Brand just downriver from the Mary Kay to render aid.

At the same time, fleet mates Brian Hoyal and Charles Abadie Jr. heard the Mary Kay’s radio call as they were on duty at Cooper Consolidated’s Mile 164 Fleet, just across the river.

“Quickly, the fleet mates stopped what they were doing to respond and assist,” said Erik Cooper, executive director of Cooper Consolidated. “Upon arriving in the area, the kayaker was holding on to the skiff from the Marquette line boat Mary Kary as their crew assisted.”

Cooper said Hoyal and Abadie helped get Brand out of the water, then helped drag his kayak ashore. Brand did not need medical attention.

“At that point, the fleet mates brought Mr. Brand and his kayak to the Mile 164 Shipyard to ensure he had adequate rest after his accident,” Cooper said. “The CC Team there fed him a hot meal—shrimp poboy—and he stayed at the yard for half the day before venturing on.”

In his video on Facebook, Brand credited the crews for their quick response.

“They’re professionals,” Brand said. “All people on the river are professionals. They have man overboard drills and they practice this stuff. Everybody watches out for everybody out here. I’m grateful that people were there to help me. The takeaway from today is that life vests work.”

Cooper added that it also was a testament to how companies operating on the river cooperate in emergencies to help anytime someone is in need.

After the rescue, Brand posted this to his Captured Heartbeats Facebook page: “Don’t take your life for granted. I was pushed into a barge and I ended up in the river. I was rescued by fellow river men. I am really shaken, but alive. The river is no joke. I’m off the river for today. Evaluating what’s next.”

By February 15, Brand was in New Orleans and taking a break from his kayak.

“It’s not that I’m afraid of the river, nor afraid of the water,” Brand said. “It’s just I have a very healthy understanding and respect for what transpired yesterday.”

On February 16, Brand posted a video from a Carnival parade. As of February 21, he was in an airport in Houston embarking on another adventure, with assurances that he’d be back in his kayak soon.

Caption for photo: Rich Brand’s view from a Cooper Consolidated crew boat after Cooper fleet mates Brian Hoyal and Charles Abadie Jr. went to his aid February 14. Brand’s kayak can be seen on the bow of the crew boat. (Photo by Rich Brand, Captured Heartbeats)