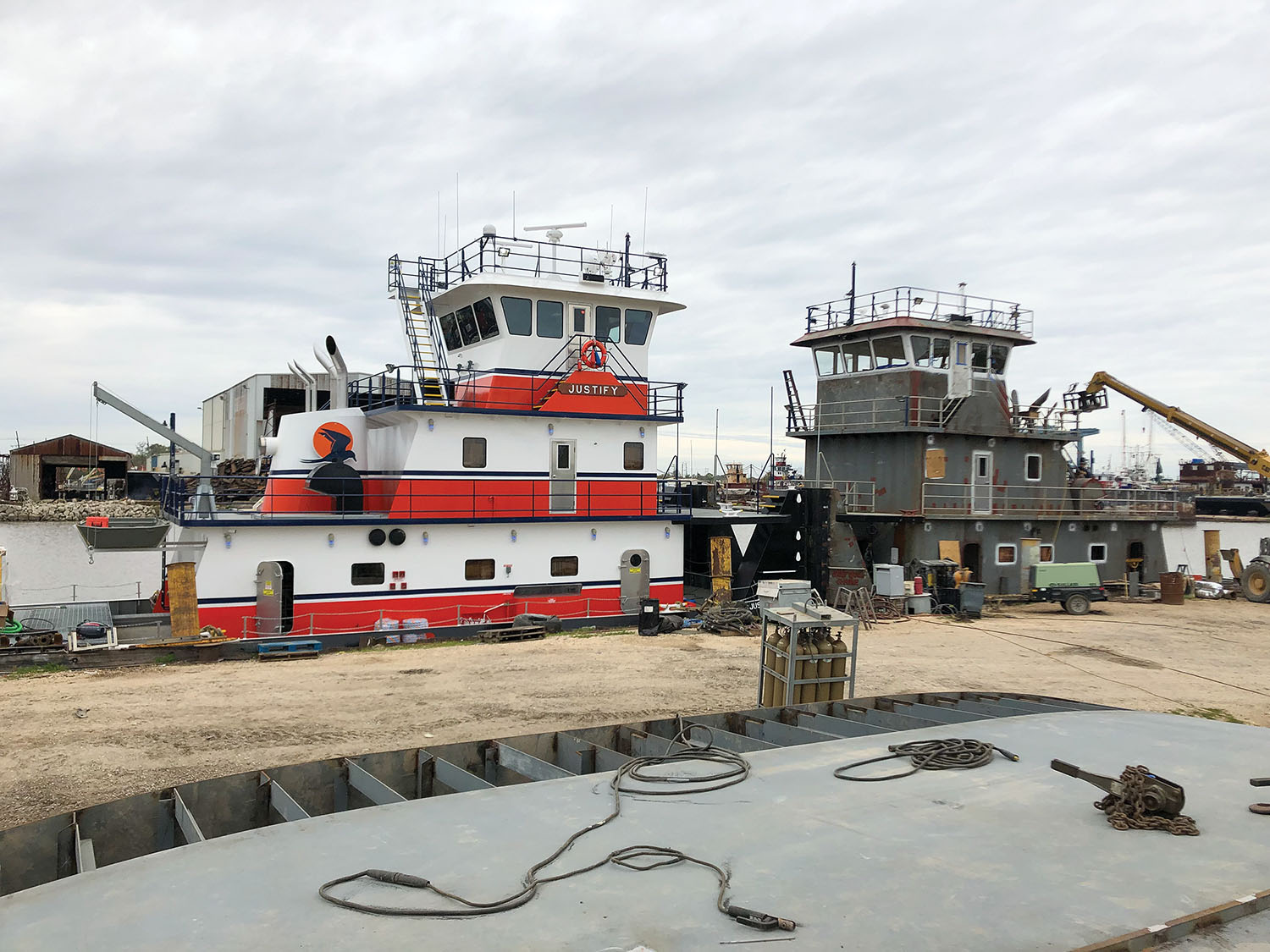 Eymard Has Four Boats Under Construction

A beehive of activity, the build-out area of Eymard Marine Construction & Repair at Harvey, La., currently has four towboats in the works, in various stages of completion. Two others are about to be started. Of the four being worked on, one is finished and is awaiting documentation, one is in the water being outfitted, the next one is on land, soon to be launched, and the fourth is an upside-down hull ready to be flipped. All are to be delivered before the end of the year to the New Orleans-based fleeting and shifting company, Turn Services.

Four vessels are 72 by 30 by 10 feet. Two of them, the mvs. Justify and California Chrome, are powered by a pair of Cummins QSK38 diesel engines rated 2,000 hp. total. The engines are mated to Twin Disc MGX5321 gears with 5.96:1 reduction and Rolls Royce four-blade, 74- by 58-inch stainless steel propellers. Ship’s power is supplied by two John Deere 65 kw., keel-cooled generators. They each can sleep six.

The Justify is still at the yard because of the government shutdown, which slowed the documentation process, and it has yet to receive its official number, said Lisa Eymard, chief financial officer.

The other two 72-foot, 2,000 hp. towboats will have twin Caterpillar C32 diesel engines. They are yet to be named.

The two remaining vessels will be smaller at 67.6 by 28 by 9.6 feet and have Caterpillar C32 diesel engines rated 1,600 hp. total, same Twin Disc gears, slightly smaller propellers at 72 by 60 inches, and same John Deere generators. They will be able to sleep seven.

The company had to lease the yard next door to make room for another jig and to organize steel and other equipment. “We have sort of an assembly line going,” said Lisa Eymard. “We build the hulls upside down on one of the jigs. At the same time, the houses are being built on a slab and in the shop close by.”

The key to the yard’s efficiency is a close coordination between the inhouse carpenters and electricians, and the vendors, and then with McKinney Salvage, which flips the hulls and lifts the vessels into the water when they are ready, Eymard said. “We have about 30 guys in the yard and three jigs.”

In the pipeline are two more 72-foot, 2,000 hp. towboats that are as yet unspoken for and a 64-foot vessel that Eymard plans to build for Gnots Reserve.

Caption for photo: The completed mv. Justify faces the mv. California Chrome at the Eymard shipyard on the Harvey Canal. In the foreground is the hull of another Turn Services boat, while to the right, out of the picture, is the fourth of the six-boat contract. (Photo courtesy of Eymard Construction & Repair)