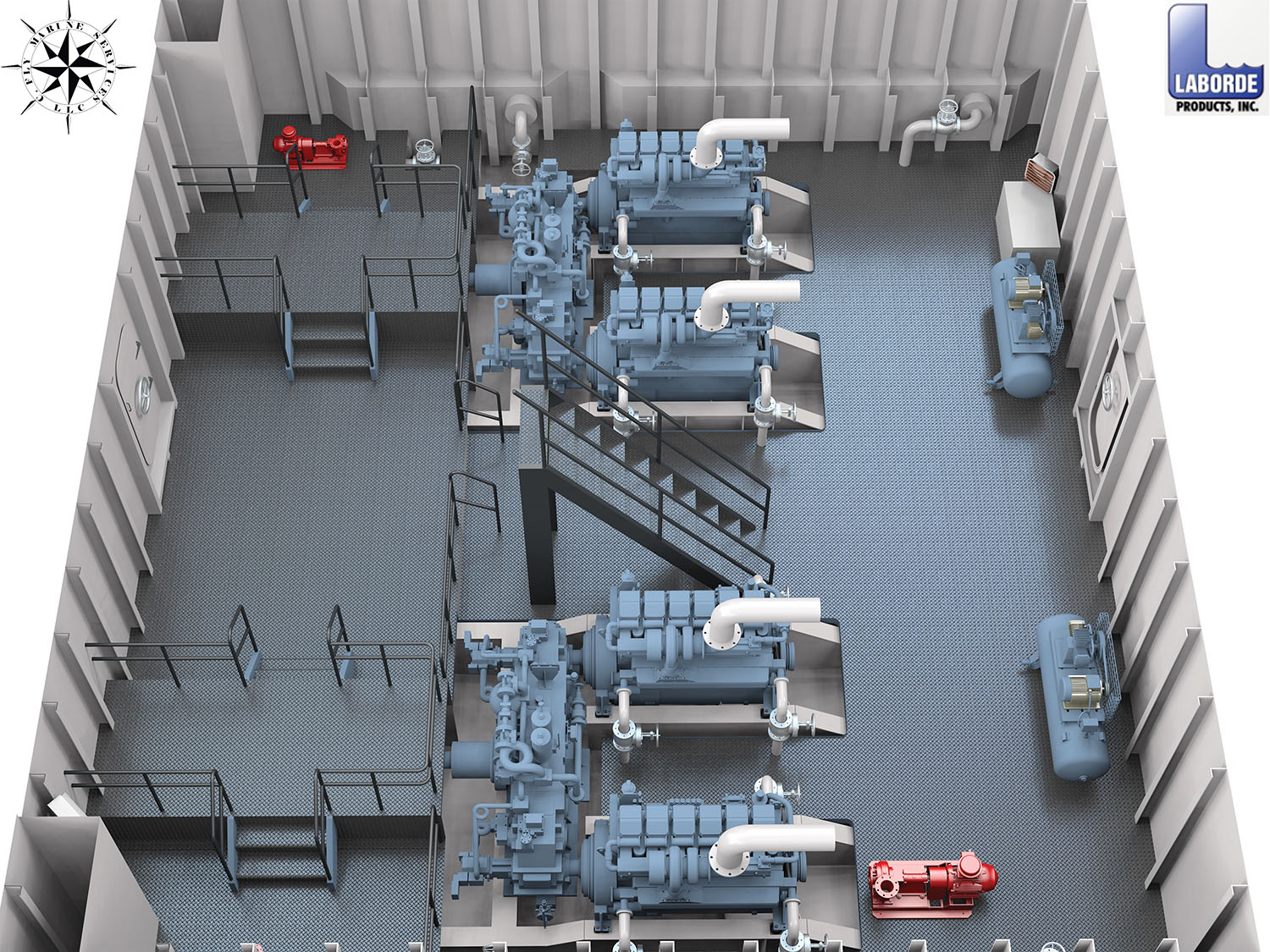 Chris Cerullo, marine sales for Laborde Products, said the design uses two arrays of twin of engines, with each array mated to a single gearbox. The Mitsubishi 30-litre, six cylinder, S6R2-Y3MPTAW-2 engines are each rated at 803 hp. at 1,400 rpm., and mated to Twin Disc Nico gearboxes supplied by Sewart.

While mating two engines to one gearbox may be considered an out-of-the-box concept, Cerullo said it has been proven in thousands of landing craft built for the military using a pair of Detroit 671 engines mated to a single Allison gearbox.

He said Laborde Products is talking to several current clients about building a boat to prove this concept.

The engines are Tier 3 and come in just under the 805 hp. ceiling. Engines developing 805 hp. now are required to meet Tier 4 standards with the complicated, and expensive, emission controls using recirculating exhaust or urea additions with the necessary stainless steel piping, Cerullo explained.

While he expects Tier 4 requirements will eventually be imposed on more brown-water boats, Cerullo knows of at least 24 boats in Bayou La Batre, Ala., and Channelview, Texas shipyards that currently are having keels laid with Tier 3 engines already purchased.

The four-engine design, while a bit wider than a two-engine, two-gear box design, can be incorporated into an existing hull drawing with plenty of space between the engines for maintenance, he said. Drawings of the design were created by C-Fly Marine, a marine architect firm based in Mandeville, La.

Fuel consumption should also be less for the four, six-cylinder engines than a pair of 16-cylinder engines and there is no extra 7 percent cost of urea to meet emission requirements, he said.

Both variable speed engines in each array remain perfectly synchronized for operations without the need of the electronic switching equipment required of a diesel-electric system, he noted.

Laborde Products introduced the Mitsubishi marine diesel into the U.S. market in 2001, and “who would have thought we would sell 1,000 engines,” Cerullo said.

“It proves that, while the perception is that the brown-water market may be slow to change, a better design will eventually win over owners,” he said.