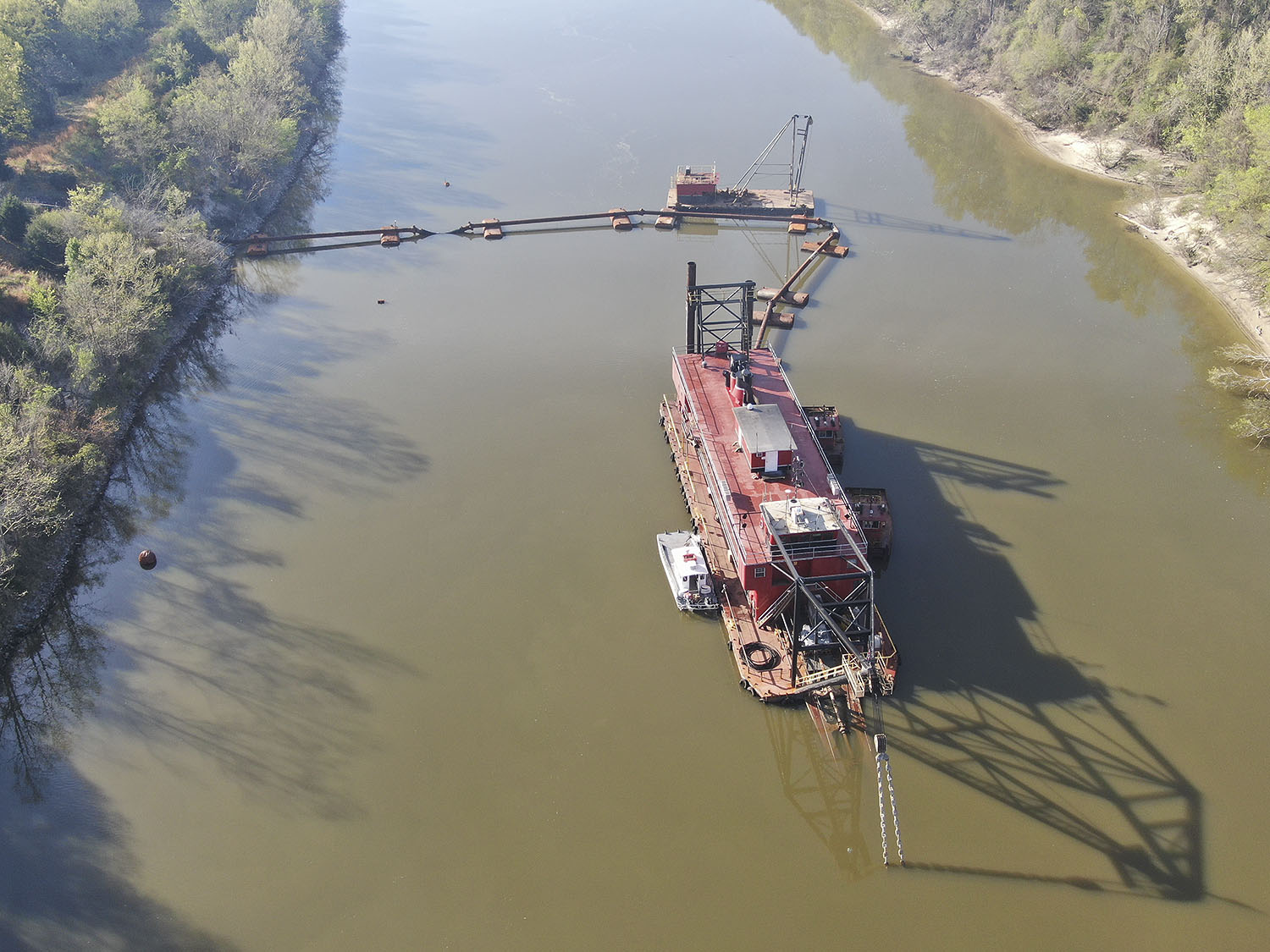 There’s light at the end of the dredge pipe for operators on the Tennessee-Tombigbee Waterway, with the Mike Hooks cutterhead dredge E. Stroud now on location and working at Aberdeen Lock near Mile 357 on the waterway.

The waterway has been totally closed to navigation at that point since runoff swept down the Tenn-Tom in late February, first inundating locks and then dropping massive amounts of silt. Below Aberdeen, the shoal was enormous. Officials with the U.S. Army Corps of Engineers estimated that 400,000 cubic yards of material settled below Aberdeen, blocking the approach to the lock and the entire channel itself for 1.5 miles downriver. Shoaling had reduced waterway depths in that area to 6 feet or less.

Justin Murphree, the Corps’ operations project manager for the Tennessee-Tombigbee Waterway, said the E. Stroud arrived at Aberdeen on March 31. As of April 2, the crew was setting up pipelines for the 24-inch cutterhead dredge.

Murphree said task No. 1 is to open a 150-foot pilot channel at Aberdeen.

“They’re not going to leave 357 and that area until they get a pilot channel about 150 feet wide,” Murphree said. “At that point, we’ll be able to start passing traffic.”

Murphree added that he expects the dredge will need three to four weeks to clear the pilot channel.

“At that point, they’re going to drop back to Mile 353.5 where we have a draft restriction,” he said. “They’ll dig there and get that done in probably a week or two. They’ll then come back up to Mile 357 and finish dredging there.”

The Corps’ floating plant is clearing a shoal near Mile 389, where Highway 78 crosses the waterway. In addition, the Corps is also overseeing a mechanical dredge operation at the Lowndes County Port near Columbus, Miss.

Murphree said that ever since the shoaling issues came into view, the Corps has been expanding capacity in its upland storage areas.

“We’ve been working in the spoil areas since about a week after the flood event,” he said. “We’ve been moving material around and creating capacity in those areas. We should be OK.”

The funding issue, though, isn’t totally resolved yet. Soon after the flood, Carl Dyess, chief of the technical support branch for the Mobile District, said the Corps would need about $10 million to return the entire waterway to its authorized dimensions. The district has identified about $5 million so far, primarily by canceling a planned closure at Whitten Lock. Still, that’s only halfway there.

“We are waiting to see if Congress passes a bill to provide the additional funds needed,” Murphree said. “I believe the bill will fund all districts what they need to recover from flooding, so the flooding on the Tennessee River and Upper Mississippi will likely be covered in the same bill.”

“Even with our current situation, the Tenn-Tom Waterway is a reliable route for moving cargo and materials,” said Mitch Mays, administrator of the Tennessee-Tombigbee Waterway Development Authority. “The rain that caused this flooding was of historical levels and this is a once-in-a-generation-type event.

“The inland waterway system is still the most affordable, reliable, and efficient mode of transportation available to industry,” Mays added. “We are working closely with elected officials in Washington, D.C., to secure the funding the Corps will need to bring the Tenn-Tom back to its authorized width and depth.”

To the east, on the Black Warrior-Tombigbee Waterway, the situation is far less dire. Throughout that system, operators have access to a 9-foot channel. That could change as water levels return to normal. Corps officials said surveys have identified areas of shoaling. They hope to find a dredge to address those areas before draft restrictions have to be imposed.