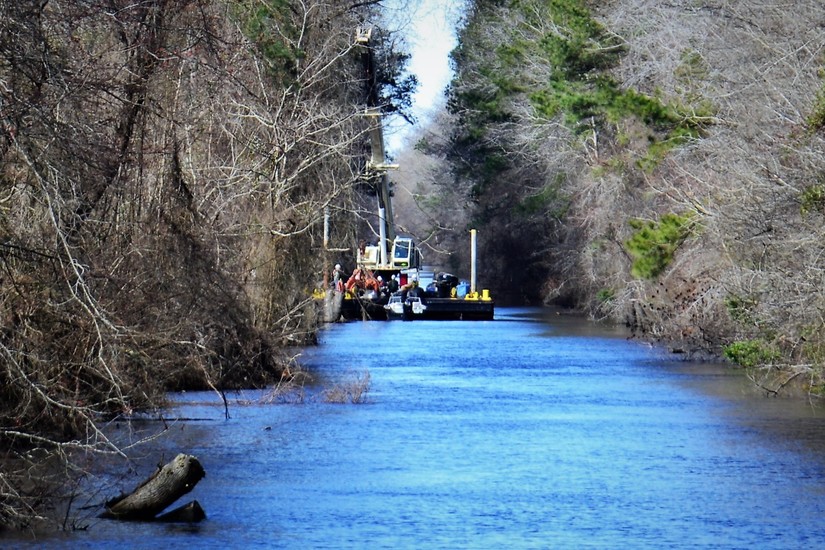 Peterson Companies Inc. began dredging at Dismal Swamp Canal in Virginia in early March. The U.S. Army Corps of Engineers Norfolk District awarded the $845,000 contract in 2018. It included $300,000 in upland placement-site repairs, which started at the end of January. Dredging work is expected to be complete in April.

The Dismal Swamp Canal, which receives water from a feeder ditch connected to Lake Drummond, runs from Deep Creek in Chesapeake to South Mills, North Carolina. Sediment often collects at the intersection of the canal and ditch entrance.

“The Dismal Swamp Canal is authorized to a depth of 9 feet, but we maintain to a depth of 6 feet because of limited commercial traffic there. The area where we are dredging has a high shoaling rate, so we are actually dredging to 10 feet. That way, we don’t end up dredging every year,” said Joel Scussel, Norfolk District’s Atlantic Intracoastal Waterway project manager.

Dredging was last done here in 2015. It’s normally carried out on a five-year cycle, but Hurricane Matthew deposited a large amount of material in the canal and pushed the time frame up.

The maintenance dredging will remove about 30,000 cubic yards of shoaling from the Dismal Swamp Canal.