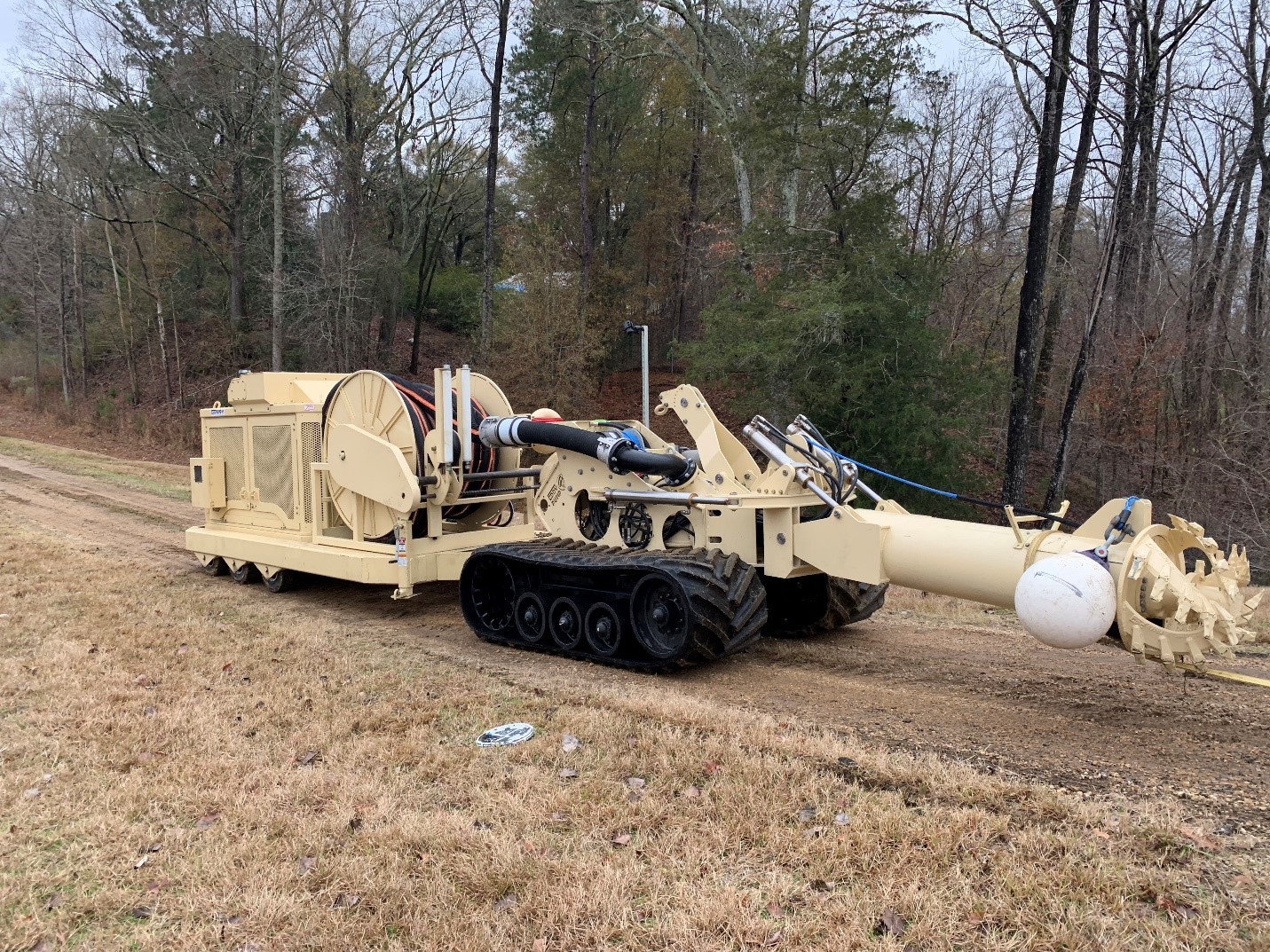 Earlier this year, the U.S. Army Corps of Engineers Engineer Research and Development Center (ERDC) took delivery of a new mini-robotic submersible dredge (MRSD) built by EDDY Pump. The dredge was a collaborative effort between ERDC and Eddy Pump. ERDC and Eddy started with Eddy’s initial design and worked together to re-engineer and design it to the military specifications needed for this project.

ERDC is conducting tests on the Subdredge at its Vicksburg, Mississippi, facility. The tests will run through this year, to ensure the MRSD meets the needs for the Corps.

Thad C. Pratt, research physicist at ERDC with the Field Data Collection and Analysis branch of the coastal and hydraulics laboratory, said the Corps had reviewed Eddy Pump’s products in-depth and then fabricated something that would better meet the needs of the Corps.

Funding for the prototype and testing came from the U.S. Transportation Command under the Department of Defense, which had a logistical need for a dredge that could work near wharfs, channels and beachheads for moving material to where they needed to go. For the Corps, the dredge’s ease of transport to remote locations is crucial for many of its missions both military and disaster recovery.

“The Army may want to land on a beach to unload humanitarian aid, or military supplies, but usually there is an offshore berm about 100 yards off that’s shallow and waves break on it so they can’t get boats past it. This dredge could be deployed off the beach or from landing craft to dredge a deeper channel to shore to allow boats to get to shore to unload,” Pratt said.

He further explained that the value of this 6-inch model the Corps is testing is that it can easily be packed in just four boxes and sent anywhere in the world.

Pratt said that often smaller foreign ports don’t have ambitious dredging programs and sections of channels have shoaled in due to wave action. The MRSD could be deployed to dredge the section needed, instead of undergoing a full channel dredging project, which is time consuming and costly.

Pratt said the company has various style pumps. It has 12- and 16-inch that produce higher production rates. “We chose the 8-inch because we wanted to be able to pack and fly anywhere. It is easy to transport and has low mobilization costs,” he said.

The MRSD can pump material 1,200 feet from the dredge without the use of a secondary booster pump. It has a 300-foot umbilical cord that connects to the hydraulic pump unit (HPU). The rear part of the unit is the HPU that delivers pressurized hydraulic fluid to drive the pump and the tracks, while the front part is the dredge that sits on the tracks. It has an 8-inch intake line and a 6-inch discharge, making it capable of passing nearly a 6-inch object through the dredge. It can pump 200 cubic yards per hour.

A RTK GPS on a surface float and IMU (inertial measurement unit) on the dredge tell the operator where the dredge is and how it is moving in relation to the seafloor. All underwater video and acoustic cameras provide real-time operational and performance monitoring and send data to the mobile control room via Wi-Fi linked to the topside HPU. An operator can be more than a mile away when driving the dredge, using a small joystick control module to adjust speeds and rates. Control and monitoring software are from HYPACK’s DredgePack®.

The Corps model was made with many sensors for different levels of operation said Dan Wahlgren, chief engineer at Eddy Pump. Onboard sensors measure hydraulic pressure, tank line pressure and hull water intrusion with topside and visual alarms. Sensors for vessel orientation that have a magnetic heading work in coordination with GPS and sonar to allow the unit to operate in blind conditions.

Wahlgren said the unit took about a year to build with most of that time waiting for parts to arrive.

He continued that the Corps wanted the system to be wireless, easy to use with minimal training required, and modular so the unit could be used for multiple purposes. Wahlgren said the MRSD was made as a platform that can continue to evolve as new needs arrive.

“This is actually the third unit we’ve made. We conducted testing in-house on the first two. We tested in canals and near dams that get heavy silt. The dredge could easily be used next to dams without having to drain the water and because it’s autonomous it solved the problem in areas next to dams where people were not allowed,” Wahlgren said.

Operation of the MRSD takes about two people – one controller and one tender for the pipe miscellaneous support functions.

Outside of the military’s immediate need for easing the transportation of supplies, the dredge will have multiple civil capabilities that will benefit the Corps dredging programs.

“It lends itself well to dredging along a port facility or a wharf. When cutting along by a wharf you want to be precise to not cut into wharf structure. Our MRSD has high resolution sonar, letting you see in black water what you’re dredging so you can do surgical removal of material without damaging infrastructure you’re trying to preserve. The real merit is in getting in where a regular dredge can’t,” Pratt said.

He said that larger vessels have suction engines that bring cooling waters up into the system, but they need clearance over the bottom of the waterway so they are not sucking up mud. The MRSD doesn’t have this and so it can ride right along a dock structure to clean up materials without risking clogging the intake for the engine.

With the ability to pump material long distances, the MRSD is also capable of sending sand ashore for beach nourishments, for use in roadbeds or to fill geo tubes.

Testing of the Subdredge is underway with tentative completion next fall. ERDC is asking for changes and improvements based on the various tests it is completing, as well as from feedback from different Corps divisions on what type of work the MRSD will perform.

ERDC is testing maneuverability and the dredges ability to deploy across soft ground to get to a waterway or launching it off a landing vessel and directly onto sea floor.

“The unit could load easily into containers for shipping,” Walgreen said. However, ERDC noticed when driving the unit with the dredge towed like a trailer, the power unit didn’t move well because it was on tires instead of tracks. “They wanted tracks and we are able to do that,” he said.

Eddy Pump delivered the dredge with a cutterhead, which pumps silt, clay and coral, but ERDC is exploring other options, since the MRSD allows for interchangeable heads, such as a water jet. The modular pump/head can be adapted to different platforms, such as an excavator, crane or cable.

“It has some kinks. We built new heads for it, so it can work inside a lock chamber or inside concrete to suck out mud and blow it away without damaging the structure,” Pratt said.

A unique feature for the Eddy Pump unit is that is comes with a self-cleaning rotating head that has a stationary rake on top that scrapes off debris or sticky clays, things that might foul a traditional head with every rotation.

Testing is also being done to gauge the pump and production rates and sensing capabilities. At this writing, testing was being done in a sump with fine grain sand. Later, the MRSD will be taken to some of the Corps managed reservoirs to pump fine grain silt and clay and determine potential production rates. According to Pratt, ERDC might also try to deploy it from a vessel in a confined space, something that would be challenging with traditional dredging technology.

Wahlgren said a commercial version of the MRSD or Subdredge will soon be available for purchase or rental. He sees it having many uses in industries such as mining, wastewater, dredging, and various others.  One of the large applications will be for usage in cities and towns that need to dredge near wharves or bulkheads, users who may need to dredge under bridges or large ships, or even for small harbors that may want to dredge marinas without having to move the boats.