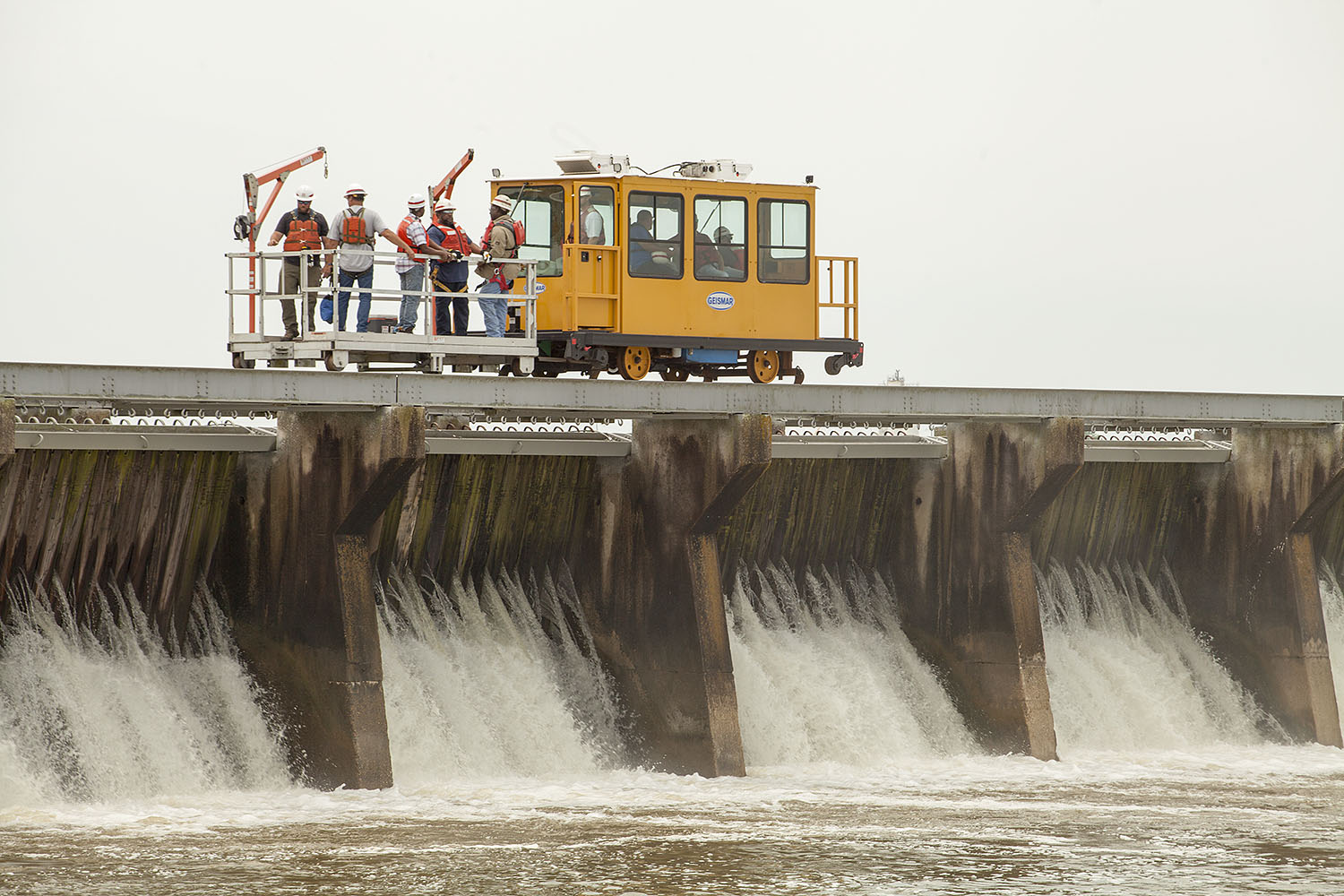 In response to a rapid rise in the Lower Mississippi River following heavy rains both regionally and upriver, the U.S. Army Corps of Engineers began operating the Bonnet Carré Spillway May 10. In the spillway’s 88-year history, the May 10 opening is unprecedented, marking the first time the Corps has used the structure twice in the same year.

Maj. Gen. Richard Kaiser, president of the Mississippi River Commission and commander of the Corps’ Mississippi Valley Division, was on hand for the historic opening. Kaiser said the Corps planned to open about 40 of the spillway’s 350 bays May 10, amounting to about 40,000 cubic feet per second (cfs.) of the river diverted to Lake Pontchartrain.

“That should have about a corresponding drop of maybe 6 inches or half a foot off the river level as we move downriver,” Kaiser said of the initial 40 bays. “I can’t tell you how many bays eventually we’ll open or how long the structure will remain open. Those decisions are based on future rainfall events that are, maybe, two weeks away.”

Just a day prior, Corps officials had announced plans to begin opening the spillway on May 14, pending approval from the Mississippi River Commission. As of that May 9 press conference, during which New Orleans District Deputy Commander Maj. Jordon Davis announced the plan to reopen the spillway May 14, the Carrollton Gage in New Orleans was at about 16.8 feet, with a slight rise expected within 24 hours.

However, due to heavy rains in Southeast Louisiana, including almost 2.5 inches in Uptown New Orleans, the Carrollton Gage jumped to 17.15 feet, prompting the Corps to move the spillway opening forward four days.

The trigger point for operating the Bonnet Carré Spillway is 1.25 million cfs. at the Carrollton Gage, which generally corresponds to a river stage of 17 feet. The relationship between flow rate and stage, though, varies according to river condition and sediment load.

With Col. Michael Clancy, commander of the Corps’ New Orleans District, out of town training for his next assignment, Davis, speaking at the May 9 press conference, first put the current high water season into perspective.

“On average, the Mississippi River’s high water season extends from March to May of each year,” Davis said. “However, this year has been anything but average.”

Indeed, the Mississippi River in New Orleans has been at or above 15 feet since late February and has been above 11 feet since December 12, 2018. That’s a five month flood fight that, according to forecasts, will last well into June. In fact, the National Weather Service’s 28-day forecast calls for a spillway-induced crest near 17 feet in New Orleans to last through the first of June. Up river, near Donaldsonville, La., the weather service anticipates a crest through about May 25, followed by a slow fall.

Despite this year’s lengthy high water season, the system remains in good shape, Davis said, with 260 active inspection sites—including seepage, sand boils and construction sites—with only two of those being high-priority areas of concern. One high-priority area is along the river levee in Point Coupee Parish, with the other involving sink holes near the Inner Harbor Navigation Canal Lock in New Orleans.

“These numbers are considerably less than what we faced in 2011, with over 600 active inspection sites,” Davis said.

“That’s the whole point of the inspection program—to catch things before they become a problem,” Jones said.

Operation of the Bonnet Carré Spillway is usually met with opposition from commercial fishermen and environmentalists, due to the impact diverted freshwater has on salinity levels in Lake Pontchartrain, Lake Borgne and the Mississippi Sound. The spillway sends river water through the lakes and onward toward the Gulf of Mexico. That influx of freshwater can impact the brown shrimp population, as well as the oyster harvest in both Louisiana and Mississippi.

However, Corps spokesman Ricky Boyett said early testing from the spillway’s opening just a couple months ago indicated a 5 percent to 10 percent seed mortality rate, with just a 1 percent mortality among the mature oysters between Lake Borgne and the sound.

“The environmental impacts are real, and we do take those into consideration when we open the spillway,” Davis said. “However, keeping human life and property safe is our major concern here.”

Kaiser echoed that, adding that the Mississippi River & Tributaries project, the system of levees, floodways, spillways and backwater channels that manages river flooding, is key to protecting an enormous population from the Midwest to the Gulf.

“People have lost sight of the fact that from Cairo, Ill., all the way south, through New Orleans to the Gulf, population is the most important component of this equation,” Kaiser said. “By opening up and letting pressure off the river at this point, we’re reducing pressure on the levees in New Orleans proper and all the way to the Gulf.

“These structures and the men and women who operate them help keep our population centers safe,” he added.

The fact remains: The Mississippi River drains 41 percent of the United States, and portions of its watershed have seen perhaps the wettest year on record.

Corps officials did not offer an estimate on the length of time the spillway will be open or the number of “bays” that could be opened, but the National Weather Service forecast suggests the spillway operation could last through early June. Starting around June 4, the National Weather Service forecasts a slow fall at Carrollton. That’s after the start of hurricane season, which adds another ominous element to the 2019 high water season.

With the spillway opening, the anchorage immediately adjacent to Bonnet Carré is closed to vessels. The Corps will also have a picket boat stationed on the left descending bank above the spillway to offer assistance. Mariners are asked to report any barge breakaways or vessels adrift to Vessel Traffic Services Lower Mississippi River on VHF channel 05A or by phone at 504-365-2230 and the Corps picket boat on VHF channel 67 or 16.

While river levees in and around New Orleans are between 20 and 22 feet, the Corps’ Mississippi River & Tributaries project calls for the use of the Bonnet Carré Spillway to maintain a stage of 17 feet during high water periods. The spillway is located 28 miles upriver from New Orleans in Norco, La.

This is the 14th opening of the Bonnet Carré. Historically, the Corps has operated the spillway about once a decade. However, this marks the sixth opening since 2008, the fourth opening in four years, and the third opening in the past two years.