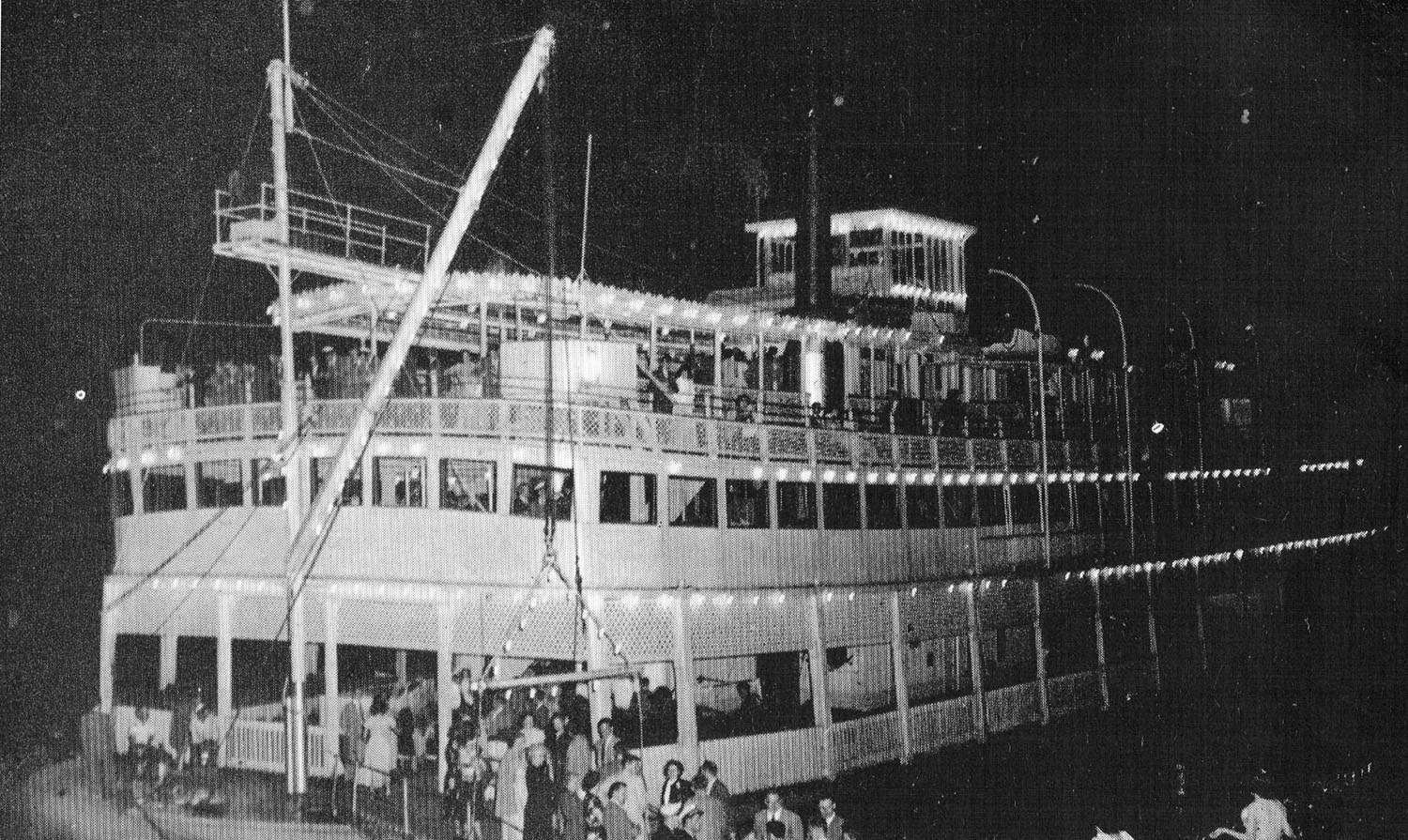 Prom On A Paddlewheeler

Seven decades ago, on May 11, 1949, the steamer Avalon arrived at my hometown of New Albany, Ind., just across the Ohio River from Louisville, Ky. The last of the tramping excursion steamboats still in operation, the sternwheeler, under the command of Capt. Edgar Mabrey, had been chartered for the New Albany High School prom.

According to the vessel’s logbook, the Avalon landed at 5 p.m., with departure for the prom excursion at 9:30 p.m. The boat returned to the landing at 11:45 p.m.

Among the passengers were my parents-to-be, Kenneth Norrington and Janet Sue Dillow. New Albany did not have a floodwall until 1952 and the steamboat tied up at what remained of the cobblestone wharf. Of the “moonlite cruise” itself, my dad recalls visiting the engineroom and watching a fireman shoveling coal for the boilers. My late mother remembered that in order to reach the landing stage, it was necessary to tip-toe across a series of wooden planks due to a slurry of mud covering the cobblestones. Many of the young ladies were less than happy at getting grime on their white ballerina slippers!

Little did my wonderful future parents know that they would someday have a steamboat fanatic son, who would jokingly chide them for not having the foresight to buy me a Steamer Avalon cap.

The riverboat spent the night at New Albany, departing at 5 the following morning.

Launched at Pittsburgh in October of 1914 by the firm of James Rees & Sons, the stalwart sternwheeler was originally named Idlewild. Shortly after its debut, The Waterways Journal described the new boat as being constructed on a steel hull 160 feet in length and 40 feet in width. Also mentioned was a beautifully finished “dancing room” with waxed hardwood flooring. Capt. Fred Way (1901–1992) told this writer of seeing the boat depart Pittsburgh on its maiden trip and of hearing the authoritative whistle.

The Idlewild was first operated as a day packet and ferry for the West Memphis Ferry Company. By the 1920s, as paved roads and truck lines increased, there was a dramatic decline in the need for packet boats. After changing owners several times, the steamboat became a tramping excursion vessel, offering brief cruises at towns along the Mississippi, Ohio, Missouri and Illinois rivers. In 1947, the boat was sold for $40,000 to a new owner at Peoria, Ill, and renamed Avalon to honor the last wish of veteran steamboatman Capt. Ben Winters. The Avalon then embarked upon a busy new life that would last until 1961, taking the riverboat upon nearly every navigable stream with sufficient water to float it. Mounting debts and years of deferred maintenance brought about bankruptcy, with many people holding the opinion that the next stop for the steamboat would be the scrapyard.

Sold at public auction on May 24, 1962, for $34,000 to Louisville, Ky., the Avalon was renamed Belle of Louisville and christened that autumn by Rita Aschbacher Bates, wife of Capt. Alan Bates (1923–2012), who supervised the incredible resurrection of the dilapidated riverboat. Now operating in its 105th year and more vibrant than ever, the boat’s twin stacks are as much a proud symbol of Louisville as the twin spires of Churchill Downs.