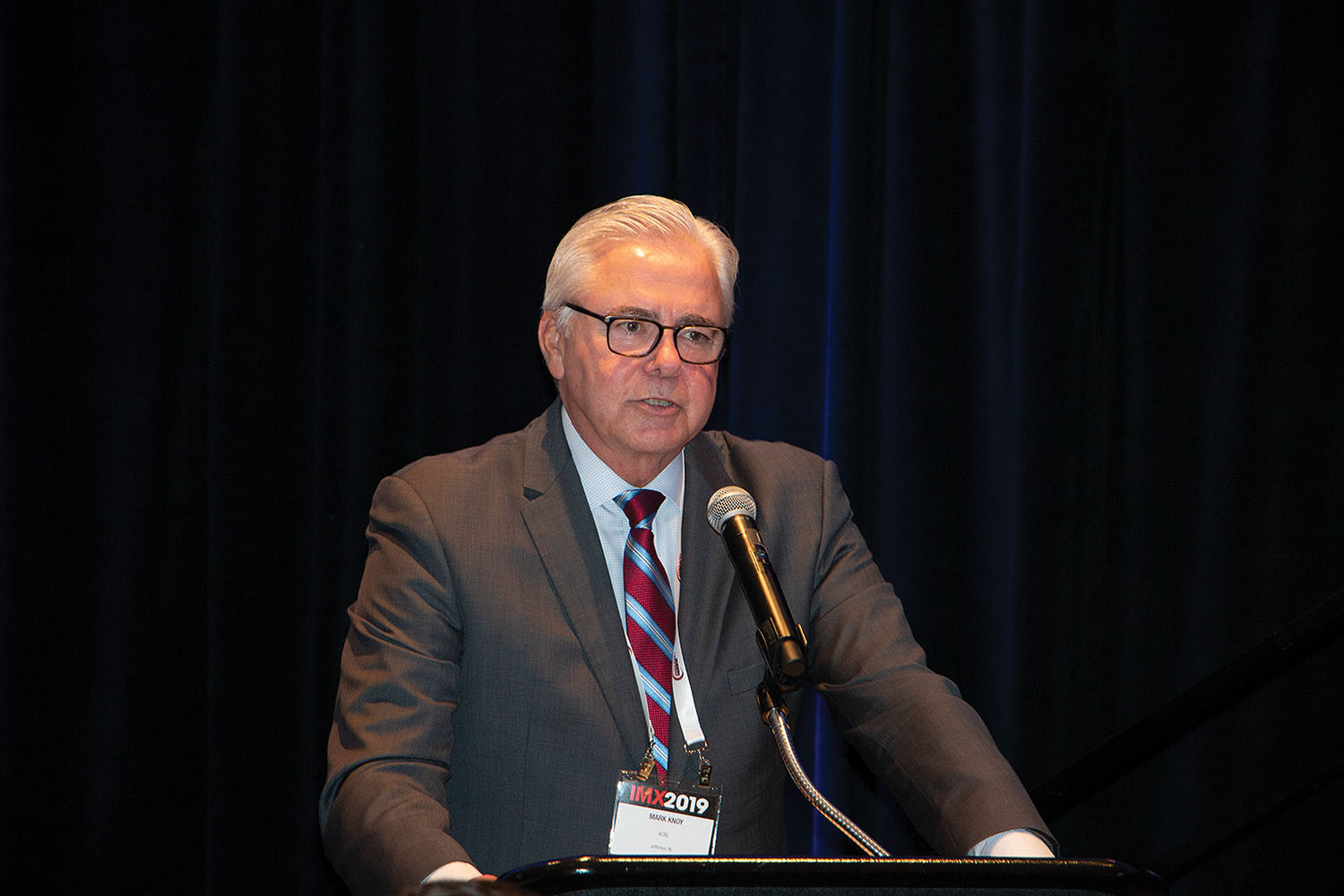 Mark Knoy, president and CEO of American Commercial Barge Line (ACBL), delivered the keynote address during the May 21 general session of the Inland Marine Expo in St. Louis, Mo.

Knoy’s speech, part of the trade show’s National Maritime Day recognition, both examined the current state of the maritime industry and cast a vision for its future. As part of the event, The Waterways Journal also honored Frank Johnson, assistant vice president of Ingram Barge Company, for his outstanding career spanning 46 years, and recognized 40 emerging industry leaders who are under the age of 40.

In introducing Knoy, Waterways Journal Chairman Nelson Spencer described how Knoy started out as a deckhand on his family’s own vessel, moving onward and upward to become president and CEO of one of the industry’s largest companies. But Spencer also shared a personal story of Knoy from days after Hurricane Katrina.

“Shortly after Hurricane Katrina roared up the Mississippi River to New Orleans, our speaker, then president of AEP River Operations, invited me and several others to join him on a trip to survey the damage,” Spencer said. “We flew to Houma and boarded a helicopter that took us to a spot on the river where numerous of his barges and boats were strewn along the levee.”

Spencer recalled standing in the wheelhouse of a grounded towboat which was serving as a base of operations for recovery efforts. As he looked out the windows of the towing vessel, surveying the damage, he spotted Knoy out on one of the company’s barges.

“Lo and behold, here was the company’s highest ranking officer in the triple digit heat and muck, with his shirt sleeves rolled up, helping a deckhand start a 3-inch pump to get the water out of one of the barge’s compartments,” Spencer said.

In taking the podium, Knoy immediately drew the crowd’s attention to the opportunities that exist today for those in the maritime industry—both seasoned veterans and newcomers. As an example, he showed a picture of his father aboard the mv. Chicago Trader in 1966 at Starved Rock Lock and Dam near Utica, Ill.

“I was 7 years old then, got on the boat and took my first trip,” Knoy said. “We grew up about four miles from Starved Rock Lock and Dam. I just fell in love with the river industry, and that’s all I ever wanted to do.”

As a 19-year-old, Knoy earned a pilot license and set out to follow in his dad’s wake aboard towboats.

“Truth be told, I wasn’t very good at that, so I went into management,” Knoy said to laughter.

Whether aboard a vessel or shoreside, though, Knoy said he sees serious opportunities within the maritime industry both now and well into the future.

“I really do think the opportunities exist today for everyone, both for those with formal educations and those working on the deck,” Knoy said. “The opportunities within the industry are hard to explain—they come from every direction and they’re all over.”

Knoy said he often sees the statistic quoted that the United States boasts 17,000 miles of navigable waterways, and yet he said he’s never heard where all of those waterways actually are located.

“I just sat down and started adding up the numbers,” he said. “I came up with about 8,000 miles where we really work. What I’d like to advocate for is a much more robust and efficient system over 8,000 miles instead of all the other miles that might exist.”

Another big stat Knoy shared was the total number of jobs connected to the maritime industry. In total, Knoy said there are about 33,000 mariners, 35,000 direct support jobs, and almost another 300,000 induced and indirect jobs.

“It’s really a key driver in the commerce of transportation, the building blocks of our nation,” he said.

Knoy counted 81 carrier consolidations that have occurred since the industry began tracking those records. He said that’s largely due to simple competition.

“It’s a very highly competitive marketplace,” Knoy said. “We often lose business over just two bits a ton moving up and down the river. We have very strong competition.”

“Just three or four years ago, we had one person in the compliance department,” Knoy said. “Today, we spend $7 million [a year] and we have seven people.”

Knoy said another factor is the fact that there are so many family-owned businesses in the maritime industry, and those don’t always become multi-generational businesses.

Who benefits from consolidation? Knoy said he believes everyone.

“Jobs aren’t going to go away,” Knoy said. “I just think there are going to be fewer employers. But those opportunities are always going to be there.”

Knoy did identify one negative of carrier consolidation, and that is it creates a leadership vacuum. Speaking to the 40 Under 40 honorees in the audience, Knoy challenged them to fill that void.

“I would ask you to get involved,” he said. “Volunteer for something. That’s the way I learned how to do things and get things done. Just step in and take a whack at it.”

Knoy acknowledged the incredible blessing that communications technology is for mariners in the field. Whereas mariners often would have to go days or weeks without speaking with loved ones, they now enjoy virtually instant contact thanks to the smart phones in their pockets.

Beyond personal communications, Knoy said he anticipates “autopilot” or “auto assist” to eventually make its way onto the river systems aboard towing vessels. The advantages are many: course control, fuel efficiency, passing assistance.

“We really need to invest in this technology,” Knoy said. “There is autopilot out there in the blue water industry, and that technology is just waiting to come to our industry. We just need the opportunity to invest and we need to bring down the cost of that investment to some degree as well.”

Knoy added that he also foresees a growing use of drone technology to assist in navigation aboard towing vessels. He played a pair of videos of a towing vessel approaching the railroad bridge in Vicksburg, Miss., one from the perspective of a wheelhouse or deck and the other from a drone 100 feet in the air. Knoy said he thinks that change in perspective would have a huge safety benefit.

From a waterway operation standpoint, Knoy urged the Coast Guard and industry to transition away from physical buoys everywhere possible.

“We need to spend that money on something that will bring a better return,” he said. “I think we’ll always need to have buoys in certain areas.”

Knoy pointed to a plan in place to replace the Coast Guard’s fleet of buoy tenders and argued that money can be better spent elsewhere.

“I’d rather have a more reliable lock than I would, maybe, a buoy,” he said.

Knoy said the nation’s natural gas and petrochemical renaissance has been great for the barge transportation industry, even as coal shipments have decreased. Barge construction has been good as well, Knoy said, although he cautioned against building barges in order to take advantage of tax benefits.

“The only problem is that a barge lasts 25 or 30 years, so the quick gain has a long pain left behind it,” he said.

Looking broadly at the transportation industry, Knoy said he believes the maritime industry will be a winner.

He also pointed to a steel mill in rural Alabama where ACBL is delivering the equivalent of 800 trucks a day.

“Our industry knows how to deliver goods cheaply, safely, and not interfere with the public,” he said.

Knoy closed with a look at how the maritime industry supports the system of waterways it operates on.

“We are the only ones paying a user fee,” he said.

That user fee amounts to $115 million a year, Knoy said, in addition to other taxes paid, all while no other users pay taxes or fees to use the waterways.

“One thing we do need to do is figure out how to keep a good, efficient, reliable system going, and one way to do it is to get all the beneficiaries of it to pay to use it,” he said.

One way to accomplish that, Knoy said, is to permanently change the cost-share for waterway projects to 75 percent from the federal treasury and 25 percent from the Inland Waterways Trust Fund, which users pay into through a 29-cent fuel tax.

“All we want is a fair shake here and to let some of the other beneficiaries pay for it as well,” he said.