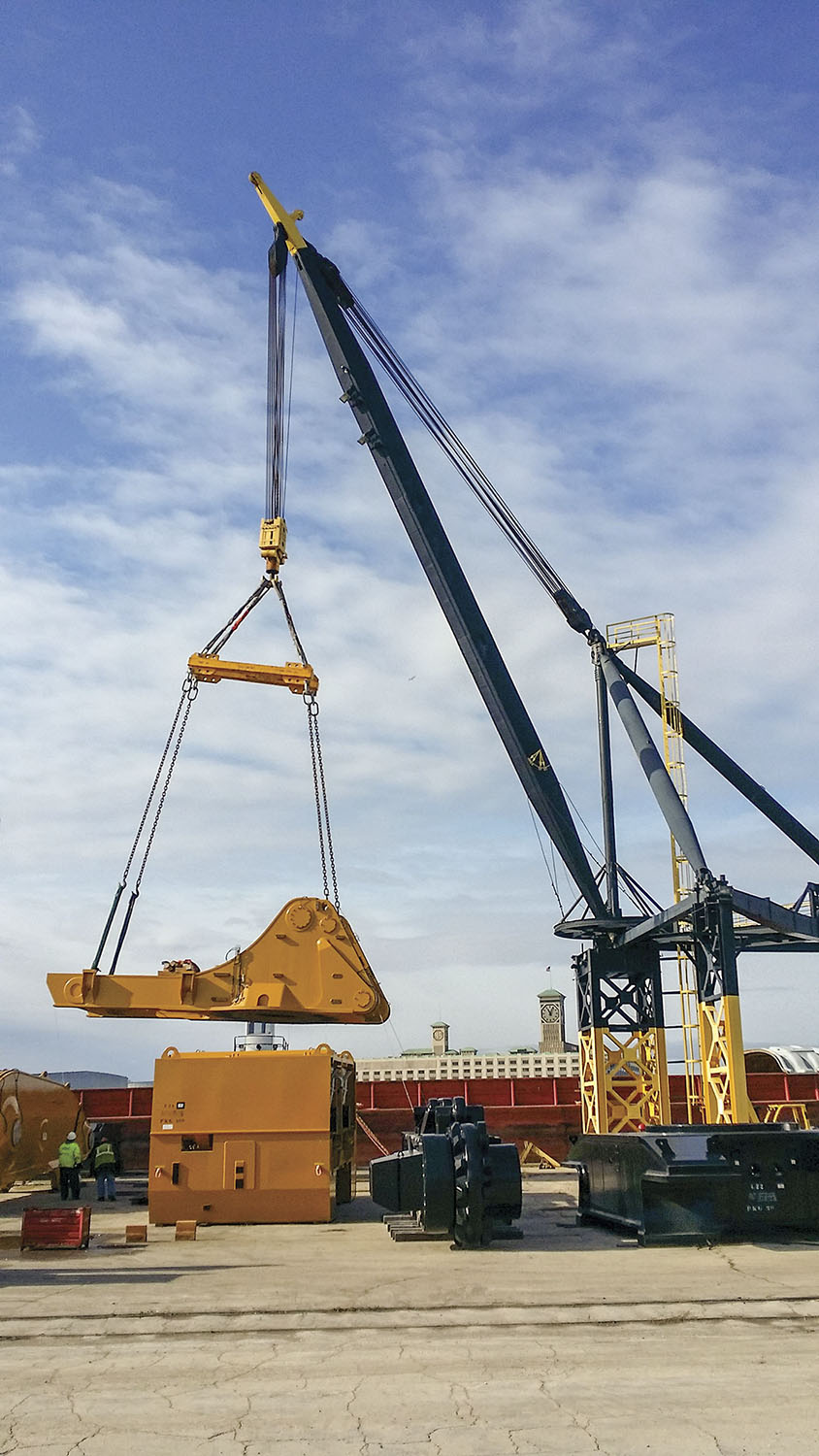 Milwaukee—the city on the shores of Lake Michigan best known to the rest of the country for its beermaking past—is something of an anomaly among Midwestern cities.  It hasn’t gotten the memo about “Rust Belt decline.” Instead, its downtown is in the middle of a years-long, multibillion dollar building boom. The boom encompasses more than 30 major downtown projects, including:

• a $524 million arena for the Milwaukee Bucks;

• a $334 million investment for the River 1, a waterfront mixed-use project;

• a new $89 million home for the Milwaukee Symphony.

As a showplace of urban regeneration, Milwaukee was picked in March to host the Democratic National Convention in 2020.

Adam Schlicht, Port Milwaukee’s executive director since August 2018, thinks the port is ideally positioned not only to participate in the city’s growth, but to anticipate and drive further regional development.

Schlicht calls Milwaukee America’s “freshwater coast” and says it might be the country’s premier freshwater port city. “We are a landlord port, and many of our tenants are working on that [downtown] growth.” Federal Marine Terminals, Cargill Salt, Compass Minerals, Great Lakes Towing Company, LaFarge Holcim, and Milwaukee Bulk Terminals (Kinder Morgan) are among the port’s tenants.

Schlicht was appointed by Milwaukee Mayor Tom Barrett following unanimous approval by the Milwaukee Common Council and assumed his role on August 6. The former Great Lakes Regional Representative for the Saint Lawrence Seaway Development Corporation, part of the U.S. Department of Transportation, Schlicht has already overseen the roll-out of a new website portal for the port that debuted in April.

His appointment came just as a study was released detailing the port’s economic impact on the city and region. The report, titled “Economic Impacts of the Port of Milwaukee” was put together by Martin Associates of Lancaster, Pa. It found that the port sustained more than 1,300 local jobs, generated more than $100 million in revenue in 2017, and produced more than $30 million in state and federal taxes (WJ, August 20, 2018).

“The port’s growth is closely tied to the economic renaissance of Milwaukee,” Schlicht told The Waterways Journal. “In his appointment, Mayor Barret urged me to champion the port’s role as a major artery for the city and the region. The city has pursued active reinvestment and improvement” at the Port of Milwaukee.

In the fall of 2018, the port received a $3 million grant from the state of Wisconsin, which it will match with $700,000 in funds to provide $3.7 million for new rail and rail-related infrastructure improvements that will enhance the port’s attractiveness. The city has supported the Port of Milwaukee’s domestic and international marketing and business development effort for the port’s marketing efforts, said Schlicht.

In September, Komatsu Mining Corporation announced that it will build a $285 million North American headquarters and manufacturing campus along Milwaukee’s harbor, creating 443 jobs. Local media are calling it the largest urban manufacturing deal in the U.S. The company, which exports heavy equipment all over the world, is putting together its design team; construction is expected to begin at the end of 2019.

It will occupy 54 former brownfield acres on the waterside, with 2.5 million square feet of offices, manufacturing and research and robotics labs. Komatsu would grow to about 1,000 full-time jobs in the Milwaukee area through the project. Komatsu would receive up to $59.5 million in state tax credits if it hits projections for job creation and capital spending. The city of Milwaukee, through a tax incremental financing district, could provide $25 million in additional public funding.

In 2018, said Schlicht, the port’s rehabbed liquid bulk terminal returned to service, exporting ethanol. “I’m optimistic about the capacity of that pier; I think it will increase its volume in 2019,” he said.

Also important to Schlicht is the port’s work on reviving a multimodal container terminal at the Port of Milwaukee. The port had an intermodal terminal at its Jones Island facility that handled between 18,000 and 25,000 TEUs (20-foot equivalent units) during its last decade of operation, before it closed in 2012.

Even before a deal between Wisconsin and Taiwanese manufacturer Foxconn was announced in 2017, local businesses have pushed for the revival of intermodal capability at the port. “It would be the first publicly available intermodal container facility in Wisconsin,” said Schlicht. “Today, shippers must  go to Chicago to backfill a container. That’s not a growth proposition for Milwaukee or Wisconsin. Intermodal capacity in Milwaukee is significant for the entire region and the state.”

Foxconn originally said it would spend $4 billion in Racine County on a facility that was supposed to build large TV screens and generate 13,000 jobs, but the deal has recently run into controversy.

The story of the port’s exports and imports has mostly been “steel in—from Belgium, the Netherlands and other European producers—and Wisconsin agribusiness products out to Europe,” said Schlicht. Export tonnage was up by 30 percent in 2018.

Most barge transits at the port carry grain, said Schlicht; 2017 saw 27 barge transits and 2018 saw 18. Schlicht said he is a “little more tepid” about export tonnage in 2019, due to the ongoing trade dispute with China and Europe, which has hit ag exports the hardest in Wisconsin. Still, he said, ag products from the port have found new markets, including a recent shipment to Tunisia.

Schlicht pointed out that the port also has a recreational mission. The Lake Express Ferry, which runs to and from Muskegon, Mich., has had 15 years of successful operation at the port. Its catamaran-style vessel carries about 100,000 passengers annually.

He foresees an uptick in cruise activity in 2019, from an average of between two and four vessel visits per year to 11. “The cruise business on the Great Lakes is hitting its stride,” he said.

Caption for photo: Mining equipment is loaded onto a river barge by Port Milwaukee’s 220 ton Stiff Leg Derrick for transit to Houston via the inland waterway system. Port Milwaukee is one of few Great Lakes ports with access to the Mississippi for tug-and-barge service connectivity to Lake Michigan. (Photo courtesy of Port Milwaukee)