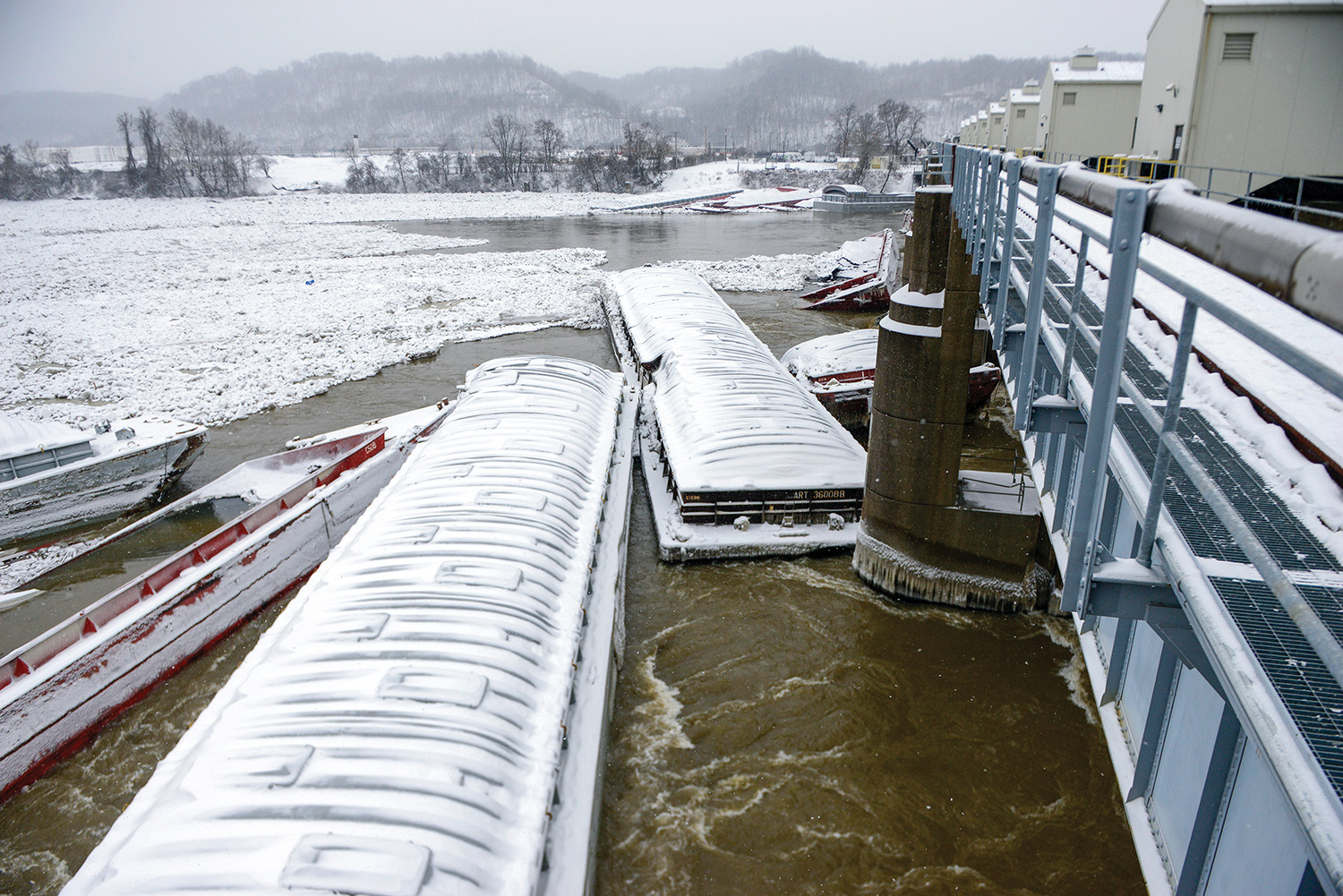 The National Transportation Safety Board (NTSB) concluded that a failure to properly maintain a fleeting area on the Ohio River was the cause of a January 2018 incident in which 27 barges broke free and drifted downriver, striking Emsworth Locks and Dam and causing $12.5 million in damages. The NTSB report recommended changes in the way the Corps of Engineers permits, and the Coast Guard examines, fleeting areas.

On January 13, 2018, the barges broke free from the Jacks Run fleeting area at Mile 4 on the left descending bank of the Ohio River near Pittsburgh, Pa., and they began striking the lock and dam at 7:12 a.m. They also struck and damaged two Corps of Engineers workboats, driving one into one of the dam’s concrete piers. The workboats and nine barges were declared total losses.

The Pittsburgh area had experienced a record amount of rainfall that contributed to rapidly rising waters. The river rose more than 12 feet between midnight January 12 and 6:15 a.m. January 13. The fleeting area was normally tended by the 800 hp. Jack Klee, but in anticipating the high water conditions, the operator assigned the 1,050 hp. James Garret and the 1,800 hp. Cori Weiland to the area. The James Garrett’s captain later stated that conditions did not allow the crew to adjust the mooring lines to accommodate the rising water. Ice formations were accumulating at the head of the barge fleet.

At about 6:15 a.m., the captain of the Cori Weiland “saw sparks fly” and believed them to be caused by the steel-pile mooring cell as it gave way. He realized the barges and his vessel were adrift and picking up speed. The captain sounded a general alarm and called the captain of the James Garret, as the entire flotilla moved downriver. The two vessels attempted to push the barges back to the fleeting area, but the current was too strong. Both captains ordered their boats to let the barges go, as they were becoming concerned for the crews’ safety. Each boat made up to a single barge and pushed it to safety.

The remaining barges drifted downriver and struck the dam. Seven passed through the dam’s open lift gates, two sank above the dam, and the rest lodged in various locations in the dam and along the riverbank.

The NTSB determined that the Allegheny County Sanitary Authority, which owned the fleet, and Industry Terminal & Salvage company, which operated it, had failed to properly maintain the mooring area, allowing shoaling and failing to properly inspect the mooring cells.

The report noted that fleet permit-holders are “expected but not required” to provide a facility operations guide that is merely a set of recommended best practices, not a binding set of rules, to the Corps, and that the Corps normally does not review it before issuing a permit. Neither the Corps nor the Coast Guard can enforce them, and not all operators practice them; as a result, “some of these shortfalls are contributing to breakaways.” The report noted that the Pittsburgh area has a long history of barge breakaways caused by high water and ice buildups. “In the first five months of 2018 alone, six barge breakaway incidents created significant economic and waterway disruption.”

Furthermore, the report found that the Coast Guard’s usual practice of inspecting a fleet when barges were not moored there was inadequate. “Contributing to the accident was the Army Corps of Engineers’ and Coast Guard’s lack of resources and authority to effectively inspect fleeting areas and ensure they are maintained,” the report concluded. Both agencies stated they don’t have the resources to inspect fleeting areas for structural integrity.

The report recommended the Coast Guard establish more regulated navigation areas (RNAs), which are already provided for in federal law and can require further measures at fleeting areas.