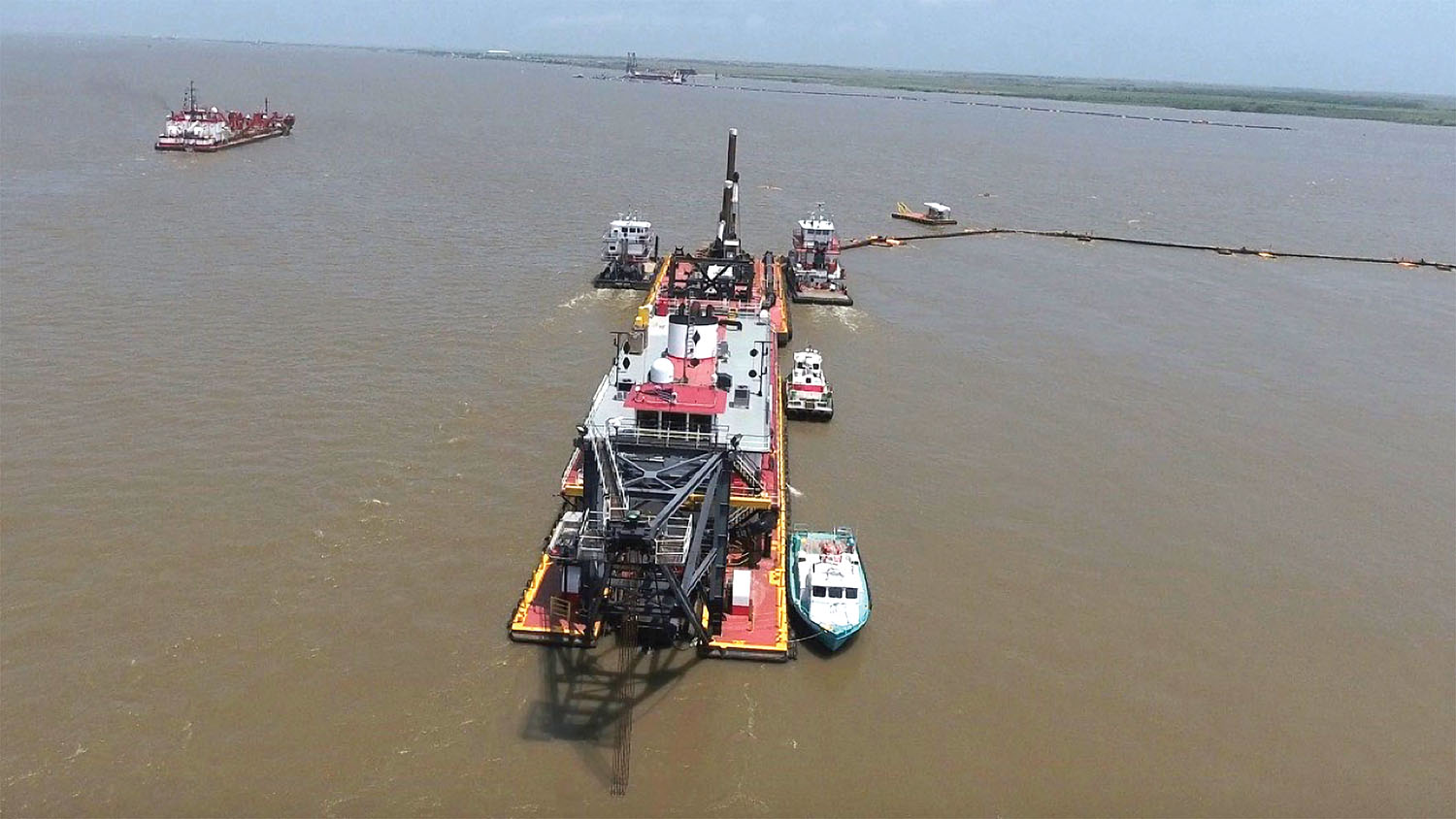 Visitors to the Pass A’Loutre Wildlife Management Area to the south and east of Head of Passes on the Lower Mississippi River will have to watch where they step this summer—and be on guard—because of protective least terns, killdeer, black-necked stilts and sanderlings nesting in the area. It’s an area bustling with avian activity, thanks in large part to routine maintenance dredging in the vicinity of Southwest Pass and Head of Passes.

While much of the news surrounding the months-long high water and shoaling on the Lower Mississippi River has involved draft and navigation restrictions and concerns over levees, spillways and the threat of flooding, this good news story has continued to unfold in the birdfoot delta, where the Mississippi River splits into its passes and empties into the Gulf of Mexico.

Perennially, high water means sediment, and sediment means shoaling at Southwest Pass. And with high water on the Lower Mississippi River stretching back to November, it’s been a long fight to maintain the channel through Southwest Pass and Head of Passes, where the river splits into its outlets.

Draft restrictions due to both fog and shoaling dropped the maximum draft at Southwest Pass to 41 feet earlier this year. Constant dredging has brought the recommended draft back to 44 feet as of June 13. Currently, there are three hopper dredges working in the area of Southwest Pass, including the industry dredges Newport and Stuyvesant and the Corps of Engineers dredge Wheeler. All the dredges are working in the area of Head of Passes, with material deposited in the Hopper Dredge Disposal Area (HDDA).

Concurrent with the hopper dredges near Head of Passes, the industry cutterhead dredge R.S. Weeks remains stationed at the HDDA, pumping material into the nearby Pass A’Loutre Wildlife Management Area, with the material used beneficially to build new land in the fragile and significant birdfoot delta.

This is an ongoing, land-building success story in a state known more for land loss through erosion and subsidence.

Dating back to 2009, the Corps of Engineers through its annual dredging operations and maintenance budget—and operating within the federal standard—has built more than 8,000 acres of land within the birdfoot delta. The federal standard, with regard to dredging, means essentially that material must be disposed of in the most cost-effective and environmentally responsible way.

In 2009, a cutterhead dredge at Southwest Pass removed 2.9 million cubic yards from the channel and pumped it into the surrounding marsh, creating a total of 100 acres. In the past decade, cutterheads have removed more than 77 million cubic yards of material from the channel around Southwest pass, with more than 5,600 acres created as a result. Material has been placed in the area of West Bay, to the north and west of Head of Passes, and within the Pass A’Loutre Wildlife Management Area, to the south and east of Head of Passes. This year alone, 10.3 million cubic yards of material from cutterhead dredging alone at Southwest Pass has been used beneficially to create close to 1,000 acres.

And the hopper dredge numbers aren’t far behind, even though the HDDA isn’t mined for material every year. Since 2009, 43.3 million cubic yards of material has been deposited by hopper dredge in the HDDA, and that’s translated to 3,184 acres created through beneficial use.

“By the end of the calendar year, we should be knocking on the door of 10,000 acres since 2009,” said Sean Duffy, executive director of the Big River Coalition.

Duffy has long been an advocate for a fully-funded Corps dredge program for both economic and environmental reasons. A fully dredged channel means more efficient and reliable commercial navigation. It also means a more resilient birdfoot delta. Through the beneficial use of dredged material, the birdfoot delta has actually been gaining land over the past decades. Conversely, the state of Louisiana as a whole, statistically, loses the equivalent of a football field worth of land to erosion and subsidence every 45 minutes.

To combat its coastal emergency, Louisiana has enacted a coastal protection and restoration master plan, a 50-year, $50 billion roadmap for resiliency. Part of that plan is a pair of large sediment diversions at an estimated cost of $2.2 billion. According to the state, the Mid Barataria Sediment Diversion, the larger and costlier of the two, could build and nourish up to 30,000 acres over a 50-year period.

Duffy said that estimate for Mid Barataria puts what’s happening through the beneficial use of dredge material on an annual basis into perspective.

“Here we are looking at 10,000 acres in 10 years with no outside help,” he said. “This is done as part of the O&M. There’s no federal incremental cost difference, because it’s all done within the federal standard.”

Not only is it no extra cost to the Corps: neither the state nor any other non-federal partner is having to pay for the work near Head of Passes.

Duffy said it’s been a team effort, with the Corps playing the quarterback position. The state’s Coastal Protection and Restoration Authority has issued a policy letter, saying the beneficial use in and around Southwest Pass is complementary to the state’s master plan. The work also is in conjunction with the Louisiana Department of Wildlife and Fisheries, which oversees the area that’s receiving the material.

Duffy said the Corps also has had to get creative with laying pipelines in order to discourage nesting until sediment has been pumped. Tactics used include everyday scarecrows and blast horns, just until the pumping is complete and pipelines repositioned.

The impact has been immediate and awe-inspiring. Duffy recalled a recent conversation he had with a representative from the Corps’ environmental team.

“He said, ‘Sean, you wouldn’t believe all the bird activity down there. You have to pay attention so that you don’t step on a nest,’” Duffy said.

Just this year of dredging alone will create 1,000 acres in the Pass A’Loutre Wildlife Management Area.

“It really is a model of success,” Duffy said, “and the photos are amazing.”