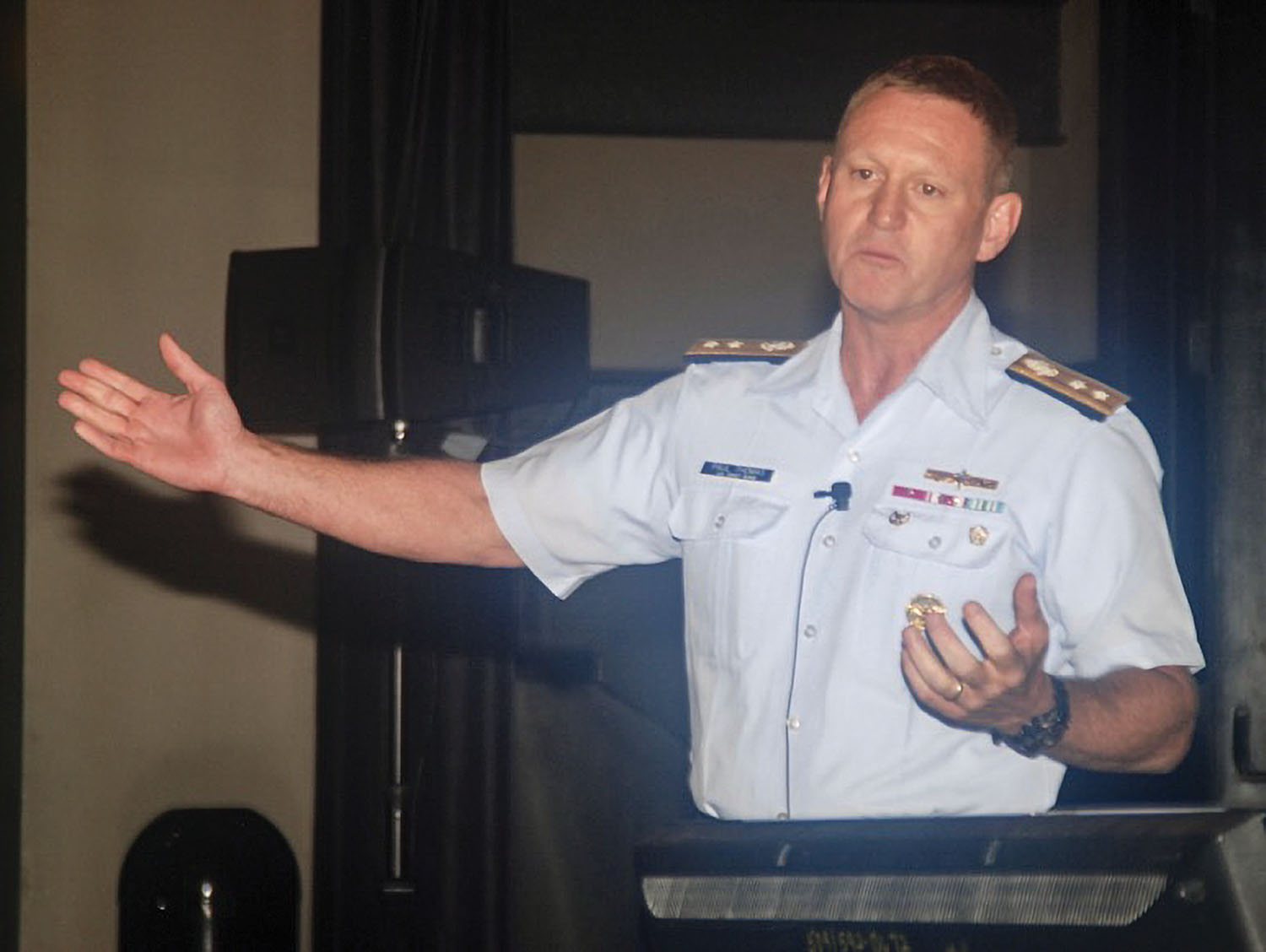 With high river continuing for what will be an unprecedented duration, attendees at the Marine Industry Day 2019 expressed concern about the impact of a combined high water and storm surge if a hurricane approaches the Lower Mississippi River.

The Greater New Orleans Port Safety Council sponsors Marine Industry Day and this was its eighth year. It was held at the Ace Hotel in downtown New Orleans on May 30.

During a panel session dealing with the 2019 hurricane season, the moderator challenged Stevan Spencer from the (Louisiana) Flood Protection Authority-East and Joaquin Mujica from the U.S. Army Corps of Engineers to prepare an analysis of the impact of a hurricane strike during high river. The analysis is to be presented at the next Port Safety Council meeting in July.

After the intensive 2005 hurricane season, Revitte said a lot of effort has been devoted to hurricane storm surge modeling. Forecasts of landfall location three days out are as accurate today as one-day predictions in 2005, he said.

Since water drives a lot of evacuation planning by authorities, forecasting now incorporates Probabilistic Surge or P-Surge modeling. That forecasting does not include rainfall, he said.

P-Surge represents “reasonable” worst-case scenarios with 90 percent of the time surge being no worse that predicted. Warnings are broadcast for storm surge overtopping land greater than three feet with a “threat of life.”

During Hurricane Katrina in 2005, storm warnings were issued but no surge warnings. Kartina went on to devastate the Mississippi Gulf Coast and flood 80 percent of New Orleans

Rear Adm. Paul Thomas, commander of the Eighth Coast Guard District, delivered the luncheon address. His comments focused on the need to increase capacity in moving cargo and passengers on the inland waterways while reducing the environmental footprint. This has to be accomplished with ever-increasing complexity of systems.

Increased government regulation should not be the answer to solving problems, he suggested, pointing to the way industry has mostly developed the waterway action plans to proactively deal with high water. Government regulation is always reactive, he said.

“Industry is dynamic; regulations are not,” Thomas said.

Industry has the most current data to address risk management on the waterways and, while much of it contains proprietary information, companies and pilots can gather and quickly share real-time navigation information, suggesting location of shoaling channels, as an example.

As another example, he said deep-draft vessels might wait offshore for market conditions to improve for their cargoes, and then come into port with several stops. Industry knows the changing conditions driving this movement much better than government.

Transparency in business can be enhanced by government, he said, citing airport parking garages, which can largely be full. To eliminate drivers continually circling looking for parking spaces, some airports have signs that point to which floors of the parking garage have spaces available, with some even having lights above available spots to direct drivers.

In dealing with potential cyber attacks, he said the distinction between cyber safety and cyber security is becoming smaller. Rather, he suggested, it should be viewed as cyber risk management and include prevention, preparation and response.

Computer access should be limited. Training should include knowing how to respond to a cyber attack on plant operation controls and when it is safe to turn on systems shut down during an attack. Third-party auditors should include this in Subchapter M reviews, he said.

During a review of brownwater high-water incidents, Patrick Cheramie of Kirby Corporation discussed the company’s near-miss program, which has been successful in increasing awareness of risks and reducing the number of incidents.

Kirby has purchased quite a number of companies over the years and with each acquisition, Cheramie said the near-miss reporting system was implemented. Each boat was required to submit at least one near miss weekly, with no repercussions based on the reports.

Data from the reports was collected and sent to the vessels without the names of offenders. At one point, the company decided to discontinue sending the reports to the vessels, but there was a significant response from boat crews wanting to read the reports.

Cheramie was pleased with the response, realizing that boat crews actually read the near-miss reports.

Mark Wright of The American Waterways Operators said he was looking for help with a Mid-America Regional Partnership and its current project of dealing with moveable bridges.

Following up on Cheramie’s discussion, Matt Lagarde of Ingram Barge said it was important to him to “find out what ‘at-risk behavior’ was going on aboard vessels that we don’t know about in the office.”

During high river, he said it was important for crews to communicate changing conditions such as current set at a bridge so it can be passed to other vessels. Information passed at crew change is very important, so we can “stop repeating mistakes.”

Rob Keister of Sabine Surveyors said feedback from the company office to vessels was most important in dealing with near-miss reports.

During high river, the Coast Guard has been conducting helicopter overflights, said Lt. (jg) Andrew Jacot. The focus of those flights is safety, not finding ways to issue fines or criminal charges. Of particular focus is finding towboats with weather deck doors open, a serious condition, particularly during high river.

He suggested captains conduct navigation assessments before leaving a dock and include emphasis on watertight integrity.

In discussing issues during high water, he said problems were found with crews operating in areas in which they were not familiar, lack of knowledge of the vessel’s safety management system and not knowing the vessel’s layout and condition of equipment. Some poor communication between meeting vessels and also among crews during watch change handovers was found.

High river conditions have led to barge breakaways, and Coast Guard inspectors are looking for the increased moorings that are required. He also said it takes much more room for tows to top around, and tows should try to avoid getting broadside to the current as much as possible.

He added that Star Fleet is requesting that barges that are tied downstream from the company dock not have raked ends facing upriver so access for crew changes is safer without the danger of towboats being swept under rakes.

Lagarde was a speaker in this session as well, and said access to vessels was an issue during high river. Some docks lay wooden pallets in the water and put aluminum gangways on top for access to docks. This is not the safest practice, he said, particularly if a crewman is injured and emergency access in needed.

MSTI Matthew Lindsey, also from Sector New Orleans, added that the overflights are looking for tows pushing into levees, a serious violation. He said he transferred into New Orleans and this is his second high-river event.

“You’re the subject-matter experts,” he said to industry leaders. “In the end it’s all about working together.”

Pilots are also taking extra caution during high river. The Bonnet Carré Anchorage adjacent to the open spillway is closed and pilots are leaving additional room between ships in anchorages because the high current is causing anchors to drag, said Capt. Steve Hathorn, president of the New Orleans-Baton Rouge Steamship Pilots Association. Some ships have completely lost anchors and chains.

Coordination between pilots associations has been increased, with daylight-only sailings for downbound ships and restrictions on mid-stream buoy moorings for cargo transfers. He added upbound ships still run at night as far as Burnside (Mile 170).

“You can hear in people’s voices the stress of this extended high river,” he noted, adding that “everyone is pulling together” to get through it.

As a hurricane approaches, Capt. Mike Miller, president of the Associated Branch (Bar) Pilots, said the trigger point for evacuating pilot quarters near the mouth of the Mississippi River is 36 hours before gale force winds. However, the pilot boats at the station are vulnerable to seas and that conditions could change the trigger point.

The pilot station is about 100 miles below New Orleans, and conditions deteriorate rapidly near the coast, long before in the city, he noted.

Frank Morton, a director of Turn Services, said the snow melt has not yet occurred and that water is still to come down the Mississippi River.

“Stay scared; there’s nothing wrong with it,” he said when asked to comment on high river conditions by Nation. “The slightest incident could cause loss of life.”

“We all had our first high river,” he added in commenting on some discussion of inexperienced crews. “Use the buddy system and have two deckhands on watch at all times,” he said as mitigation to high river risk.

He expressed some concern about having continued current flow against saturated levees. In extreme cases, water flow could cause the water-soaked earthen levees to become plasma-like and fail, he suggested.

The Corps of Engineers dredge Wheeler has been scheduled to operate for an additional 45 days, he added. Last year industry did not respond to five of the Corps’ requests for dredge projects because dredges were not available.

Duffy pointed to a study by the economics department at the University of New Orleans that said commerce on the Mississippi River amounts to $735 billion a year and 2.4 million jobs.

Mark Wingate discussed the beneficial use of dredged material from the Corps of Engineers perspective. Normal dredging costs about $3-3.50 per cubic yard to remove. To dredge and use material beneficially, the cost jumps to $10-$15 per yard, he said.

A study to deepen the Mississippi River to 50 feet has been completed, but it is awaiting funds from Congress. He also touched on expansion of the Inner Harbor Navigation Canal lock. The plan is to increase lock size to 100 by 900 by 20 feet from its existing 640 by 75 by 31.5 feet.

Also on the Corps vision is deepening the Port of New Orleans alongside the docks. Currently the Corps maintains the channel, but not dockside. There are also studies on creating land in the vanishing Louisiana marshes with two Diversion projects: Mid-Breton and Mid-Barataria. Louisiana’s CPRA (Coastal Protection and Restoration Authority) is the local sponsor and advocate for those plans.

During the panel discussion on Hurricane Season 2019, Capt. Kristi Luttrell, commander of Sector New Orleans, said no changes were made in the Marine Hurricane Contingency Plan since 2017. She suggested a review may be made before the next hurricane season.

As “Maestro of the Dance,” Capt. Luttrell outlined the levels of preparedness found on the Coast Guard Homeport webpage, but cautioned that in a fast-approaching storm, one of the four stages could be skipped if necessary.

The Memorandum of Agreement between industry and the Coast Guard affects vessels below Mile 73 along with instituting controls within the Regulated Navigation Area along the Harvey and Algiers canals.

Jim Stark of the Gulf Intracoastal Canal Association discussed the 12 locks and floodgates along the GIWW between Texas and Mississippi. He participates in hurricane preparation and response along with other industry representatives, being imbedded within the Coast Guard Incident Command structure.