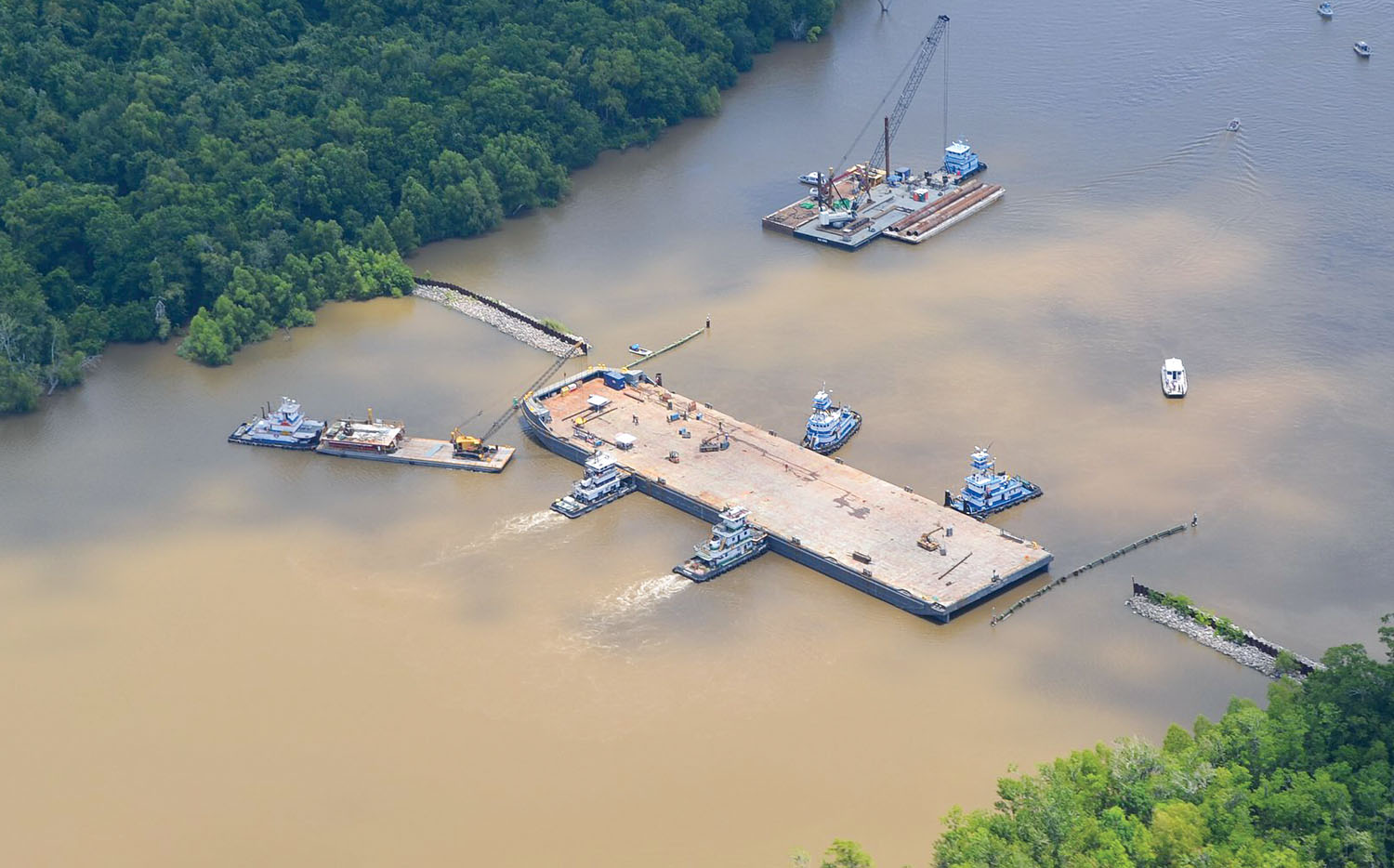 In Morgan City, Sediment Is Filling In As Fast As It’s Pumped Out

In Morgan City, La., where the Atchafalaya River draws near to the Gulf of Mexico, sediment pushed down from both the Red River and the Mississippi River continues to drop out and clog the channel, hampering not only commerce but the effort to dredge and maintain the channel.

The Atchafalaya River, through the Old River Control Structure, receives 30 percent of the combined flows of the Red and Mississippi rivers. That mean if the Mississippi and Red are in flood, so is the Atchafalaya.

“It’s been bad,” said Mac Wade, executive director of the Port of Morgan City. “The dredge has been working since April. We’ve had to move it twice because of the high current, the high water volume and all the silting and shoaling.

“The dredge reports almost daily that it’s filling in about as fast as they can dredge it out,” Wade added.

The Manson dredge R.F. White, a 30-inch cutterhead dredge, has been on the Atchafalaya below Morgan City since April. It started out at Crewboat Cut, then moved down to Mile 142. In both places, the sediment load moving down the river was filling in the channel as fast as the dredge could remove it. The R.F. White is now farther down in the lower bay.

Wade said all that material is being used beneficially either in the Atchafalaya Wildlife Management Area or on some midstream islands created in years past.

Unfortunately, everywhere the dredge has been will have to be re-dredged once the water level drops back to “normal.”

“They tell us to expect high water into late July,” Wade said. “It’s once in every 124 years. This is the worst sustained, record-setting flood ever.”

The current flood, indeed, is rivaling the Great Flood of 1927 in terms of duration, with many areas actually surpassing the 1927 flood for length above flood stage.

“There might’ve been higher waters, but never this much for so long,” Wade said.

It’s been a disappointing flood season, because Morgan City has a new dredge—and a three-year contract with Brice Civil Constructors—ready to work in the problematic bar channel once the flood passes. That plus dredging in the river below the city should get Morgan City to a channel that can accommodate larger ships coming in from the Gulf of Mexico. Wade said he’s still hopeful to have a navigable channel this year.

Wade said this year the port was poised to dredge the bar channel, the river channel and the Bayou Chene, thanks in part to supplemental funding for Hurricane Harvey recovery. Much of that funding, though, has been exhausted as the region combats the current flood.

“We’re moving money from different budgets,” Wade said. “We had $16 million set aside for [dredging Bayou Chene], but we’ve already had to move over $10 million from that project to the Atchafalaya River project. We’re going to have twenty-something million dollars in that project, and we’re still not going to have enough.”

Instead of dredging the Bayou Chene, the state of Louisiana has installed a temporary barge gate across the bayou to prevent backwater flooding in communities upstream. Communities like Pierre Part in Assumption Parish were already seeing higher water levels due to the Atchafalaya. When the Corps announced the possible opening of the Morganza Spillway, the state moved quickly to install the barge gate to prevent further flooding.

Even though the Corps has postponed opening Morganza indefinitely, small bayou communities north of Morgan City are still reaping the benefits of the barge gate.

The negative aspect of that is that vessels coming from the Gulf Intracoastal Waterway no longer have the option of using the Bayou Chene.

Wade was sure to praise the Corps for monitoring levees and operating spillways and flood structures well.

“The levees we have down here—thank God these levees haven’t failed, but they’ve been waterlogged for six or seven months now,” he said. “We’ve got some very good levees, but how much can they take and how much can they stand?”

Cindy Cutrera, economic development manager for the port and the current president of Inland Rivers, Ports & Terminals Inc., said Morgan City isn’t the only port feeling the physical and economic pressure of a flooded river.

“It’s not just us,” she said. “I have friends throughout the inland river system, and the flooding and not being able to operate is going on everywhere. We just happen to be the end of the road here.”

Caption for photo: Installation of the ‘barge gate’ across Bayou Chene to prevent backwater flooding, both from the Atchafalaya River and from the potential operation of the Morganza Floodway. (photo courtesy of the Louisiana Civil Air Patrol/St. Mary Parish Office of Emergency Preparedness and Homeland Security)