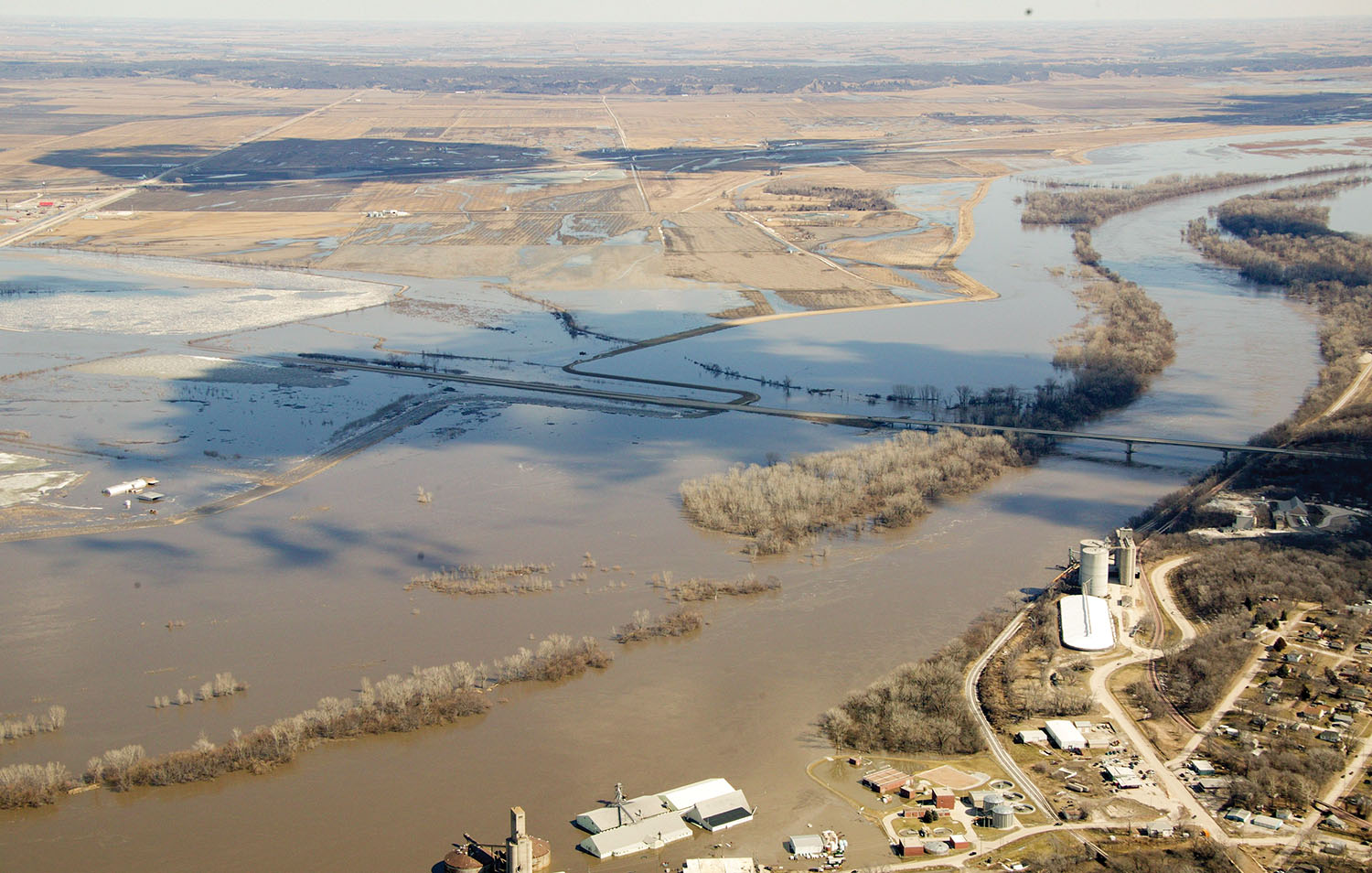 The Omaha Engineer District is moving forward in its response to severe flooding on the Missouri River and tributaries that began in March and continues into June as an unprecedented amount of water flows into the system. The swollen Platte River created river levels never before recorded on the Missouri River below the confluence of the two rivers, causing more than 50 major levee breaches, some of which are undergoing initial repair through emergency dredging contracts.

Permanent repair plans are in the works, although the Corps districts involved, including the Omaha and Kansas City districts, are taken up with a vast flood emergency that changes daily.

The Corps established the Omaha Systems Restoration Team (OSRT) to deal with the flooding and flood damage.

Bret T. Budd, chief of the OSRT, described the extent of the emergency and response to Associated General Contractors (AGC) members on May 9.

“The devastation from this flood is unprecedented in the region,” he said, with 45 river gauges on the Missouri and tributaries setting new high-water records.

He showed slides of the cities of Columbus, North Bend, Fremont, and Waterloo, Neb., inundated by flooding in the Loup, Elkhorn and Platte rivers in March. There have been more than 50 levee breaches, he said. Four priority Missouri River breaches downstream of Council Bluffs were identified for emergency projects, and requests for assistance on 53 levee systems on 313 miles of levees were outstanding, he said.

The four priority breaches in the Missouri River south of Council Bluffs were from 450 to 615 feet wide and some contained scour holes hundreds of feet deep. The breaches are being repaired using hydraulic dredges that pump sand into the gap, placing it using a specialized procedure that allows stabilization of the fill at the same time the river is flowing through the breach.

In parallel to these immediate actions, the Omaha District is planning the permanent levee repairs to bring the levees damaged by the March flood to the same level of authorized flood risk reduction that the systems had prior to the flood.

There are more than 500 miles of levees on the Missouri, Platte and Elkhorn rivers and tributaries that have experienced significant flood damage. Due to the magnitude of damage along these levees, repair of the levee system will take an extended period of time.

Levees must be active in the Public Law 84-99 program to be eligible for federal funding for repairs.

On April 14, Western Contracting Corporation of Sioux City, Iowa, received a $7.5 million contract for the initial breach repair at Missouri River Levee Unit L-575-A near Percival, Iowa. Work began on May 4, with completion scheduled for July 3.

“This is one of four priority sites identified for initial breach closures,” said Jeremy Szynskie, project manager for the OSRT. “The initial repairs will stop the flow of water through the levees so repairs can be made to areas behind the levee such as I-29 and the city of Hamburg, Iowa. The repairs will also reduce the risk of flooding during normal storm events until the rest of the levees can be evaluated and repaired,” he said.

Western Contracting is using the 24-inch cutterhead dredge Iowa for the project, which was suspended on May 28 due to high river levels and unsafe conditions.

The second breach closure project was awarded to Newt Marine Services of Dubuque, Iowa, for $12 million on April 19. Work began on May 4, with completion expected by July 9. Newt is using two 18-inch dredges on project L575-B near Hamburg, Iowa.

On April 26, the district awarded a $6 million contract to Western Contracting to repair a 1,200-foot breach on levee L611-614 south of Highway 34 in Mills County, Iowa. Work began on April 27 on an initial closure at Mile 595 to return the river to the channel. The Omaha District expects that the majority of the breach repair fill material will be sourced from material deposited by the March flood using land-based equipment.

“This initial repair will provide flood risk reduction to areas behind the levee, including work that is ongoing on Highway 34 and I-29. The Omaha District is working closely with the M&P Drainage District, who is the project sponsor, the Iowa Department of Natural Resources, and the Nebraska Game and Parks Commission on this project,” said Szynskie.

The work is anticipated to be completed within 45 calendar days after the Notice to Proceed.

On May 1, the district awarded an $8.5 million contract to Newt to close a breach in the L601 levee along the Missouri River near Mile 583 northwest of Bartlett in Mills County. There are four breaches identified in the L601 levee system.

Newt mobilized two 12-inch dredges on May 16. The initial breach closure was scheduled for completion in 30 days and the placement of all material in the breach was scheduled to be completed in 80 days.

“This site was complicated by difficult access to the identified borrow area,” said Szynskie. “To help with this, the contractor plans to bring two to three smaller dredges to the project and use sand from the area on the land side of the levee,” he said.

On May 20, the district awarded a $249,218 contract to Diamond Group Engineering of Santa Ana, Calif., to close a breach in the L594 levee on the Missouri River at Plattsmouth, Neb. Diamond began work on May 21, but work was suspended on May 29 because of weather conditions that affected the rise of the river at the location. The district will allow work to continue when the levees are accessible.

To accomplish permanent repairs to all breached levees, the Omaha District issued a solicitation for a Multiple Award Task Order Contract (MATOC) on May 7. The solicitation states “The government intends to issue one solicitation and award a MATOC for shared capacity of $95 million to a target of four 8(a) contractors. Individual task orders will be solicited and competed within the MATOC pool. Task Orders within the MATOC may be Cost-Plus-Fixed-Fee (CPFF), or Firm Fixed Price (FFP). The base period for this MATOC is one year. There will be four one-year option periods, making the total ordering period up to five years from the date of award. The government’s decision to exercise an option will be contingent upon satisfactory contractor past performance and an informal survey of current market conditions.”

Dredging contractors have been approved for contracts within the MATOC but progress on the procedure has not been announced.

The OSRT held an industry day on May 17 to discuss the MATOC. Feedback and suggestions from industry on levee repairs and comments on preliminary acquisition strategies were requested. The audience consisted of regional construction contractors and other interested companies with engineering, material supply, or subcontracting capabilities.

As of June 1, Omaha District personnel were completing initial damage assessments of 54 levee segments/systems that were damaged in the flooding. This damage encompassed the Missouri River downstream of Gavins Point Dam, in addition to the Platte, Elkhorn and other tributaries. Teams had completed their on-site damage assessments on all 54 segments by May 31.

Caption for top photo: An aerial view of flooding from overtopping of levee L575 near Nebraska City, Neb., on March 16. The Missouri River reached levels never before recorded as the flooding Platte River entered the Missouri at Plattsmouth, Neb. (Photo courtesy of Omaha Engineer District)