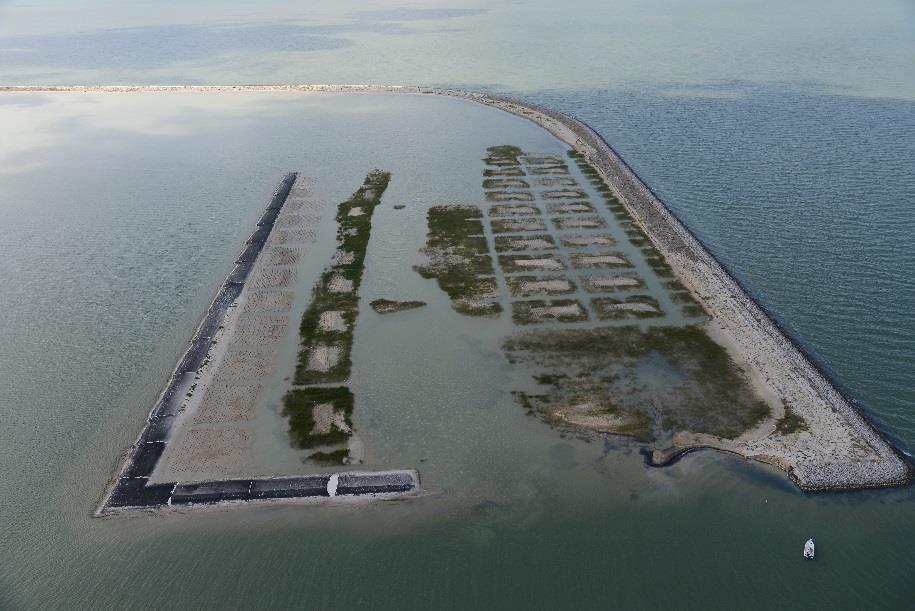 During its Annual Summit & Expo at the historic Hilton Chicago, Illinois, held from June 4 to 7, the Western Dredging Association (WEDA) presented two Environmental Excellence Awards, recognizing projects that demonstrate environmental awareness in each of two categories. The “Environmental Dredging” award went to the Zephyr Refinery Project and the “Mitigation and Adaptation to Climate Change” award to the La Quinta Aquatic Habitat Mitigation Project.

The 2019 WEDA Environmental Excellence Award for Environmental Dredging was presented to the project team from EA Engineering, Science, and Technology Inc., PBC (EA) and Sevenson Environmental Services (SES) for the dredging and restoration of the former Zephyr Refinery: Fire Suppression Ditch Project (Zephyr project). This area is located along the North Branch of the Muskegon River within the Muskegon Lake Area of

For more than 40 years the Zephyr Oil Refinery operated with historic releases of petroleum and metals into the Muskegon Lake watershed. These releases contributed to significant contamination of the sediment and wetlands surrounding the site and resulted in beneficial use impairments (BUIs) to the AOC, such as the loss of fish and wildlife habitat. The Zephyr project was identified in the Stage 2 Remedial Action Plan for the Muskegon Lake AOC for restoration in order to support BUI removal. Under the Great Lakes Legacy Act (GLLA), through the strong partnership between the United States Environmental Protection Agency (US EPA) Great Lakes National Program Office (GLNPO) and the Michigan Department of Environmental Quality (MDEQ), the project was completed in late 2018.

The purpose of the project was to dredge the wetlands and ditch to remove contaminated sediment; to clean up lead and total petroleum hydrocarbons; to remove and control invasive species; and to restore wetlands and create a diverse habitat.

At the end of the project, a total of 91.9 million gallons of contaminated water (process and contact water) was treated. All contaminated sediments over a 13.6-acre wetland area with concentrations above 2,000 mg/kg total petroleum hydrocarbons and 128 mg/kg lead to protect benthic organisms and wildlife populations were removed. A total of 49,491 cubic yards of contaminated sediment were dredged from the site, which included 38,272 cubic yards from wetland areas and 11,219 cubic yards from the approximately 1,350-linear-foot ditch portion of the site. Dredging of the ditch required a phased approach for sheet pile installation/removal to stabilize the ditch banks, allowing for dredging in the wet, and providing stabilization for haul roads, which were constructed adjacent to the ditch to allow access along the entirety of the quarter-mile-long ditch and into the wetland areas.

About 1,370 cubic yards of characteristically hazardous sediment (lead) in-situ was treated, rendering it non-hazardous via mixing with specialized equipment (Lang Tool) prior to removal.

A 13.6-acre monotypic submergent wetland dominated by invasive species with 3 acres of emergent marsh, 5.1 acres of submergent marsh, 1.2 acres of deep marsh, and mitigation of 4.3 acres of temporarily impacted wetland were restored, as was 1.6 acres of open water habitat (ditch). Finally, 223 trees and shrubs and 13,620 live herbaceous plugs and bare-root native plants were planted; more than 1.5 acres of wetlands were seeded with native seed mix; and 6 habitat structures (root wads, brush piles, etc.) per acre of restored wetland were installed.

“Working with and Engineering with Nature”

The Zephyr project incorporated guiding principles of working with and engineering with nature including: a holistic approach from feasibility and design stages to air monitoring and mitigation measures; sustainable solutions to help establish native species even in the face of future higher water levels; science-based remedial dredging and clean-ups based on thorough site investigations; extensive collaboration among more than 10 entities; efficient and cost-effective designs for reuse of on-site materials for habitat structures; and the use of adaptive management to respond to conditions that arose throughout the project.

All this resulted in a project that provided numerous environmental benefits by remediating legacy contamination and restoring native habitat within a Great Lakes Area of Concern (AOC), and contributing to the future removal of BUIs within the AOC. It demonstrated how innovative partnerships and contracting approaches can lead to success on many levels. The remediation will provide economic benefits to the Muskegon Lake area and Great Lakes region and the many lessons learned will be beneficial for future projects. In addition, the thorough public outreach activities – the site is located adjacent to residential areas – demonstrated the importance of engaging with residents and other concerned citizens.

Sustainable approaches, such as the reuse of all woody debris and trees removed during remediation on the site for habitat structures were implemented, as well as leaving approximately 8 percent of the haul road material in place for an upcoming restoration project on the adjacent property, therefore reducing disposal quantities and reusing material in a beneficial manner.

Finally, the environmental dredging of the former Zephyr Refinery: Fire Suppression Ditch area presented many unique elements that are transferable and adaptable to future contaminated sediment remediation and restoration projects with similar characteristics.

Excellence Award for Mitigation and Adaption to Climate Change

As a part of the 404-permit process, the U.S. Army Corps of Engineers has adopted a policy requiring project impacts to be offset through in-kind mitigation. To address these requirements, the Port of Corpus Christi Authority (PCCA) was tasked with creating 6.6 acres of Smooth Cordgrass (Spartina alterniflora) habitat and 19.2 acres of Shoal Grass (Halodule wrightii) habitat as mitigation for the PCCA La Quinta Terminal Project. Meeting these mitigation requirements in semi-arid South Texas was a challenge that required careful planning, design and construction. This challenge was approached by constructing the 200-acre Beneficial Use Site 6 (BUS-6) using new work (non-maintenance) dredged material through several phases. Throughout the course of the project, dredged material was placed into BUS-6 and reworked, dredged material from an upland dredged material placement area (DMPA) was reused, and 12.6 acres of marsh vegetation and 25.3 acres of Shoal Grass were planted. The success of the project made it one of the largest known actively planted Shoal Grass mitigation projects in Texas.

The project had several clear main goals; one of them was to maximize the beneficial use of material dredged from the La Quinta Channel Expansion Project. The construction of BUS-6 satisfied this goal by using dredged material to protect the adjacent shoreline from waves. In addition it created more than 200 acres of new land where estuarine marsh and Shoal Grass habitat can be created in the future. The team also aimed to

In total, to offset project impacts, more than 38 acres of wetland and marsh were established, creating a large habitat for various species of aquatic and plant life and an excellent carbon sink. Site monitoring continues to show increases in coverage and acreage of habitats with several diverse species of aquatic life.

Environmentally speaking, if the marsh continues to flourish as it is doing, the entire site has potential to be a sink for more than 420 tons of carbon per year. The project also reduces channel and turning basin siltation, which reduces maintenance dredging frequency, resulting in lower carbon emissions. From an economic perspective, by beneficially using the dredge material to construct BUS-6, dredge pumping distances were

reduced because material did not need to be pumped to upland dredge disposal areas. This dramatically reduced dredging costs and increased efficiency during construction.

In addition, by not using existing dredge disposal areas and using unused material previously placed within an upland placement area, placement area capacity for future dredging projects has been preserved, which will reducing costs for these maintenance dredging operations. The project

also reduces channel and turning basin siltation, thus reducing maintenance dredging costs and impacts to existing placement areas. The mitigation project also facilitated the development of the La Quinta Trade Gateway, which, when completed, will be a state-of-the-art multi

-purpose cargo dock and container facility that will have the capacity to handle a million TEUs annually.

The project was completed in March 2017, and survived Hurricane Harvey, which hit the Texas coastline in late August of 2017. Today the area flourishes as home to Smooth Cordgrass, Shoal Grass, and various types of aquatic wildlife that have colonized the island.

The methodologies used to develop this project can be easily transferred to the beneficial use of dredged materials for many navigation projects. And most importantly, these successful methodologies and insights applied for the design and construction of marsh and Shoal Grass habitats are easily transferrable to marsh and Shoal Grass habitat restoration or creation projects throughout the Gulf of Mexico and similar environments around the world.