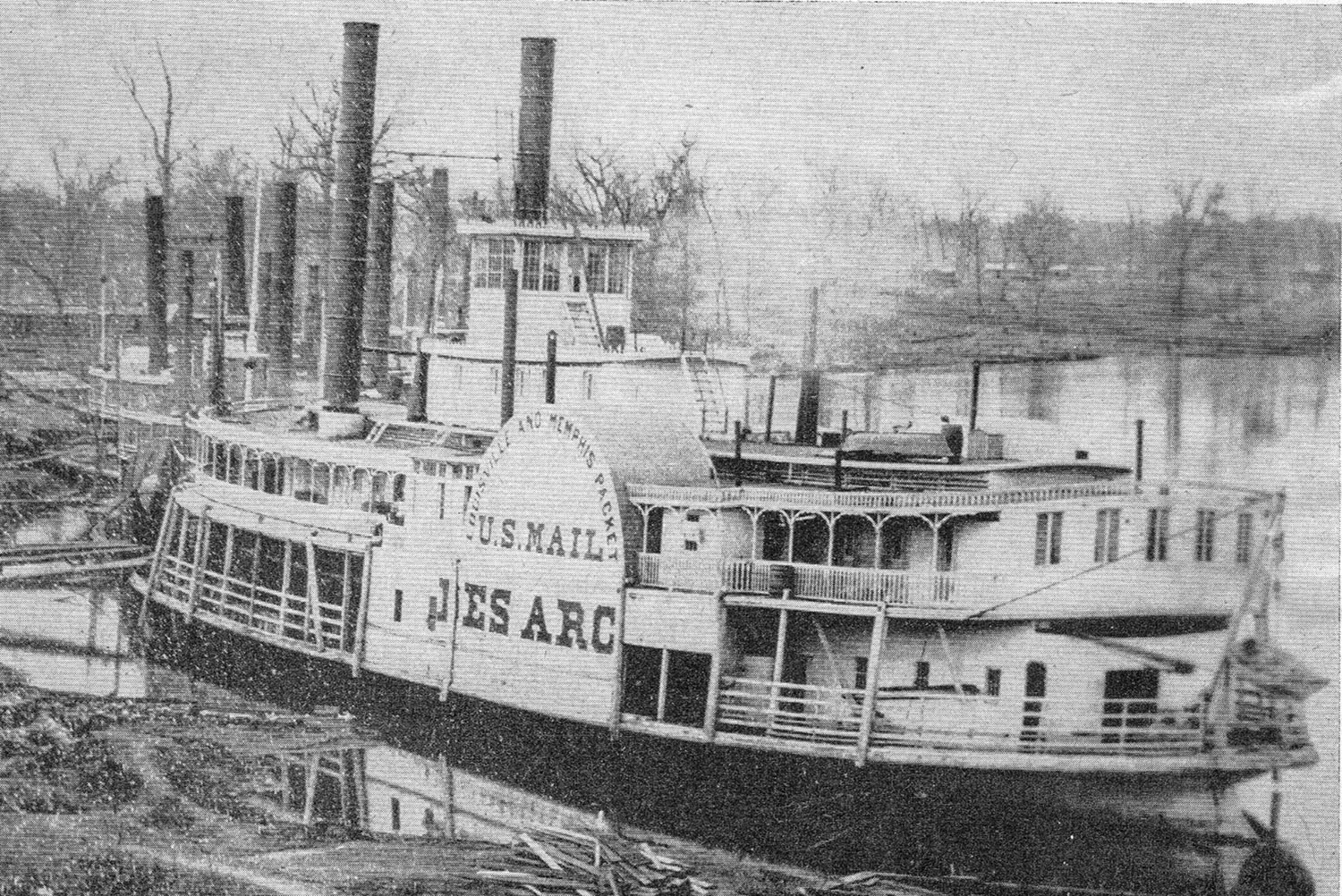 One of three steamboats to carry the name, the Des Arc was built at Paducah, Ky., in 1862. Records state that the wooden hull (205 feet in length by 31 feet in width with a depth of 6 feet) was constructed at New Albany, Ind, and the tonnage was 276. Three boilers supplied steam to engines having 19-inch cylinders with a 6-foot stroke.

The sidewheeler was ordered by Capt. Hicks King to run in the Memphis-Cairo trade. Shortly thereafter, the riverboat, under the command of Capt. Chenoweth, was entered into a contract with the Archer Line for U.S. mail delivery from Memphis to Duvall’s Bluff on the White River. Freight was then conveyed by rail to Little Rock on the Arkansas River.

The Archer firm was also composed of the packets Commercial and Emma No. 2.

The Des Arc’s initial departure for White River was on December 16, 1862, with the owner, Capt. King, in command. By Christmas, the steamboat was serving as Division Headquarters for the First Division (near Vicksburg) of the Thirteenth Army Corps, with General A.J. Smith commanding. At the time, Gen. William Tecumseh Sherman was preparing to send 11 gunboats and 59 transports (packet boats) 13 miles up the Yazoo River in an attempt to land thousands of troops and take Vicksburg from the rear. A telegram sent to Richmond, Va., on January 2, 1863, by Lt. Gen. J.C. Pemberton, Confederate commander at Vicksburg, read: “The enemy, finding all his efforts unavailing to make any inroad upon our position here, has re-embarked, leaving a considerable quantity of entrenching tools and other property, and apparently has relinquished his designs upon Vicksburg.”

For many years, river historians supposed the Des Arc had been set ablaze by a gunboat and destroyed in March of 1864. However, later research by Capt. Sam G. Smith, then managing editor of The Waterways Journal, revealed that what actually happened was that the boat did catch fire at Duvall’s Bluff; the U.S. gunboat fired a shot into the hull of the Des Arc to sink, and save, the steamboat. The maneuver worked and the riverboat was raised and repaired to continue in service.

Records of the Steamboat Inspection Service state that the boat was inspected on September 30, 1868, and during the calendar years of 1869 and 1870 until it was abandoned and dismantled in 1871.

The Des Arc’s machinery was salvaged and recycled for use on the steamer Emma C. Elliott, a sidewheeler built by the Howard Shipyard at Jeffersonville, Ind., in 1871. This steamboat, like the Des Arc, ran in the Memphis and White River trade, although its hull was 8 feet longer and 5 feet wider than that of its predecessor. The steamer was later acquired by the famous Anchor Line to run in the St. Louis and Grand Tower trade. The boat was last used in the construction project of the Merchants Bridge at St. Louis in 1889 through 1900; the vessel was then sold to the firm of P. Manion & Company, St. Louis, which dismantled it.

Caption for photo: The steamer Des Arc at a White River landing in Arkansas.