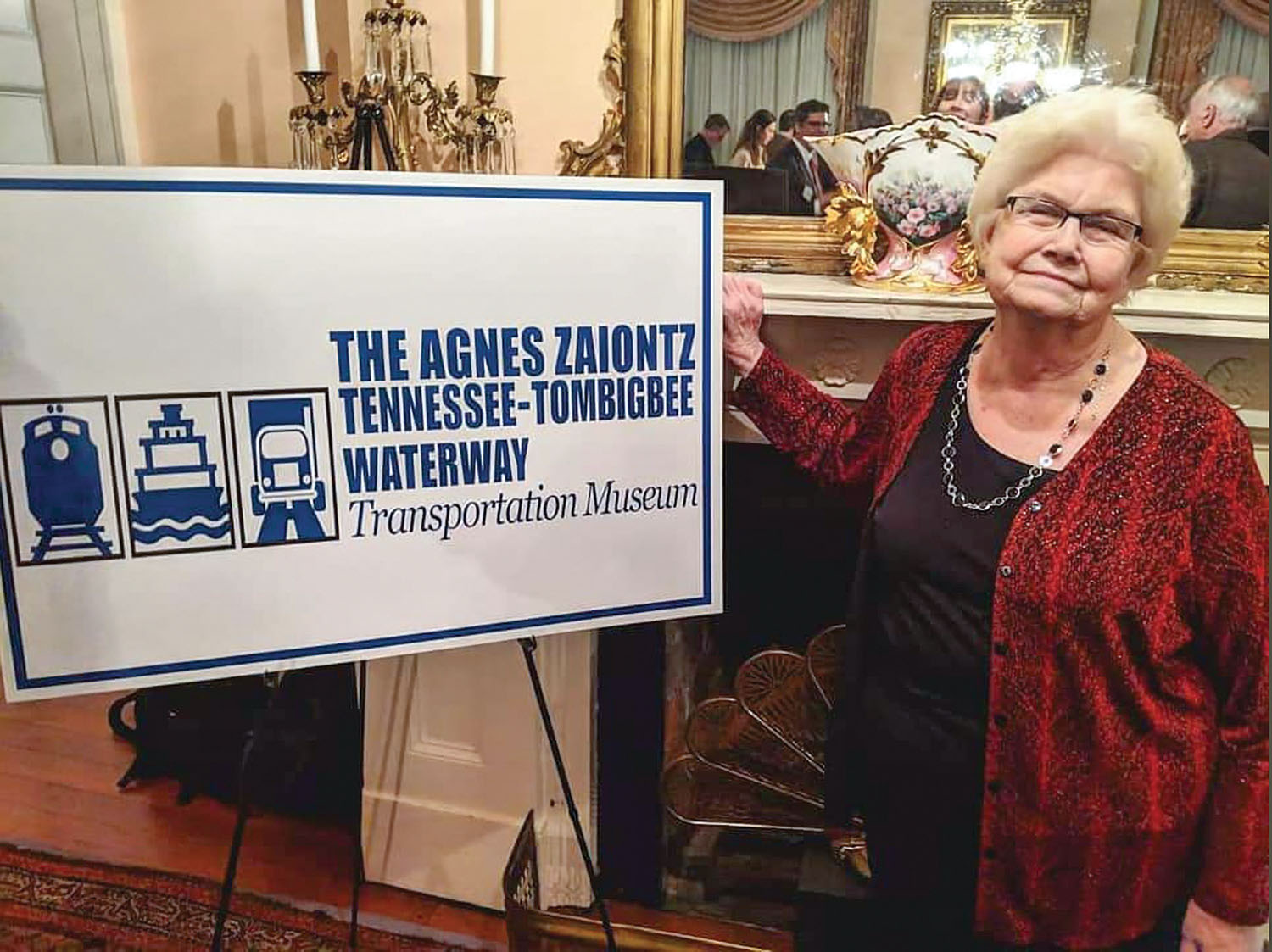 Agnes Goodman Zaiontz, longtime office manager for the Tennessee-Tombigbee Waterway Development Authority, passed away May 29 at DCH Regional Medical Center in Tuscaloosa, Ala. She was 77 years old.

For almost 35 years, Zaiontz, known universally as Ms. Agnes, Aunt Agnes or even Mama Ag, carried the title of “office manager,” but her roles with the waterway reached far beyond any job description or title. She was, simply, one of the most well-known, beloved and respected people connected to the Tennessee-Tombigbee Waterway.

“Agnes’ title of office manager didn’t come close to describe the enormous influence she had, not only on the Tenn-Tom Waterway and its development for the past 34 years, but also on those of us who had the opportunity to work with her and to know her as a friend and colleague,” said Don Waldon, former administrator of the Tenn-Tom Waterway Development Authority, in tribute. “She will be sadly missed in many ways.”

Waldon said he first met Zaiontz in the spring of 1985 in the days leading up to the June 1985 grand opening of the Tennessee-Tombigbee Waterway. With scores of state, regional and national leaders expected to attend the grand opening ceremony, waterway leaders scrambled to plan the large-scale event.

“We knew we couldn’t do this thing by ourselves, so we recruited a lot of local volunteers, and Agnes was one of them,” Waldon said.

Just a few months later, Zaiontz returned, this time as an employee. Waldon said she initially handled payroll for the authority and later took on the role of office manager—yet so much more.

“She was as much a chief of staff or a deputy administrator, because she ran that office on a day-to-day basis,” Waldon said.

Besides serving as office manager for the authority, Zaiontz also played a key role in development of the Tennessee-Tombigbee Tourism Association, which promotes the tourism and recreational aspects of the waterway, and the Tenn-Tom Marina Association, geared toward pleasure craft and those traveling the Great Loop. For those sister organizations, Zaiontz oversaw grant writing, bookkeeping, accounting, payroll and association management.

And in addition to all that, there was her leadership and vision in developing the Tennessee-Tombigbee Waterway Transportation Museum, which tells the story of the near-35-year-old waterway that was first envisioned more than 200 years ago.

“She basically built the museum,” said Mitch Mays, current administrator of the Tenn-Tom Waterway Development Authority. “She was the one who applied for the grants, gathered all the materials, oversaw the building and renovation for the museum, and developed the exhibits. The museum was her baby.”

Earlier this year, the museum hosted the Smithsonian Institute’s traveling Water/Ways exhibit. Only six cities in Mississippi played host to the traveling exhibit, and Zaiontz was the one who had a vision for the Tenn-Tom museum being in that number. Mays said, when the authority got word that the museum had been selected to host the Smithsonian exhibit, he knew it was the perfect time to honor Zaiontz for her years of leadership with the waterway. When the authority hosted a grand opening January 25 for the Smithsonian exhibit, Waldon also made the surprise announcement that the museum had been renamed the Agnes Zaiontz Tennessee-Tombigbee Waterway Transportation Museum.

“She was totally surprised,” Mays said. “It was all a secret, and she had no idea.”

Waldon said keeping Zaiontz in the dark about the renaming was quite a feat.

“If there’s anything going on about the waterway or that office, she knew about it,” Waldon said. “I said there’s no way in the world we can keep her from knowing about this.”

But Mays and company pulled it off. Zaiontz’s husband, Frank, along with her children and grandchildren, were kept hidden through the beginning of the exhibit’s opening reception. Then at the end, when the name change was announced, they all emerged to celebrate alongside Zaiontz.

“She normally knows what’s going on, but we got that one by her,” Mays recalled.

And when it came to managing the office, Zaiontz showed the same care and commitment that earned her familiar names like Ms. Agnes and Aunt Agnes. Mays said the authority typically keeps a couple of college interns or part-time employees, and Zaiontz kept in touch with them all.

“I’m talking about people who worked here over the course of 30 years,” Mays said. “She always called them her kids.”

In the Tennessee-Tombigbee Waterway’s first 35 years, one thing has been as constant as the water flowing from the Tennessee River toward the Gulf of Mexico: Agnes Zaiontz.

“In many ways, Agnes was the continuity who held the authority together during the series of leadership changes following Don Waldon’s retirement and helped ensure that it remained an effective advocate for the Tenn-Tom and other waterways supporting our economy,” said Wynne Fuller, chief of operations for the Mobile Engineer District. “Her vision and passion in establishing the Tennessee-Tombigbee Waterway Museum in Columbus, which was recently named for her, testifies to her recognition of the importance of educating present and future generations on the importance of the Tenn-Tom and America’s waterways.

“Most of all, she was a friend whose help I could always count on when I needed a question answered or faced the inevitable issues of managing a major waterway,” Fuller added. “She will be sorely missed by the Mobile District and myself.”

Mays echoed that sense of loss.

“Every time we walk by her office, we expect her to be there and start talking to us,” Mays said.