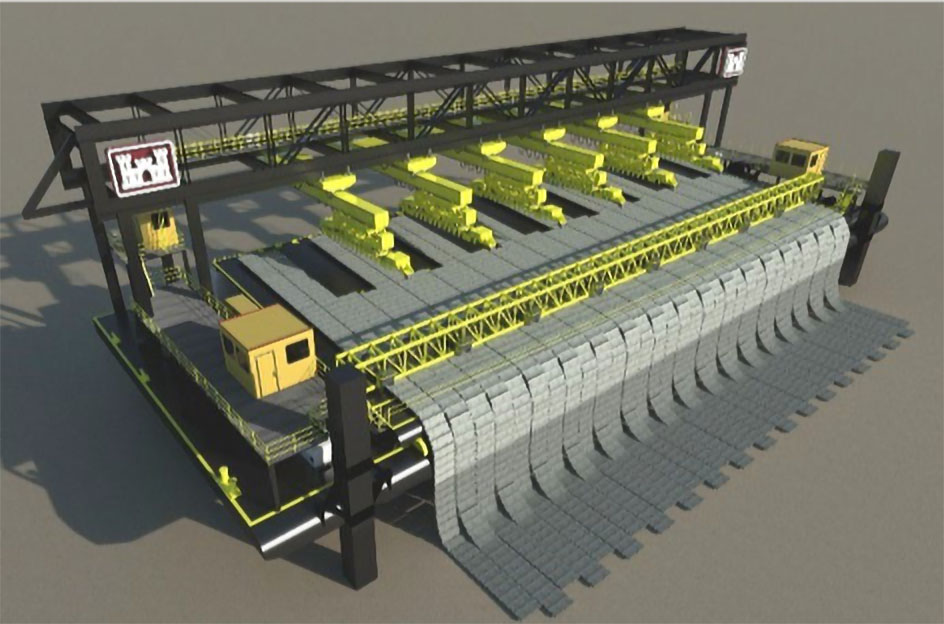 Millions of dollars of goods are transported up and down the Mississippi River every year. This transportation is made possible, in part, by the Corps of Engineers’ Mat Sinking Unit and its crew, who work tirelessly each season to protect the riverbanks with concrete mats and prevent erosion.

The Mat Sinking Unit was built in 1940, widened in 1960 and is being replaced over the next several years with new and improved plant. The new design will double the number of mat squares that can be placed in a season. The Vicksburg Engineer District, Corps Marine Design Center (MDC), SIA Solutions LLC, Bristol Harbor Group Inc. and the National Robotics & Engineering Center (NREC) are working together to design a new mat boat, which will increase production rates and improve the safety of the crew.

NREC is designing the new robotic cranes and tying gantry, which will pick up concrete squares from the supply barge, place them on the mat boat launch deck, and tie the individual mat squares together to form one large mattress. As more squares are placed on the launch deck, winches pay out cable, allowing the concrete fabric to slide down the launch deck. Once the appropriate number of squares have been connected, automatic clamping and tying units will cut the cables and let the mat slide off into the river. This concrete fabric protects the river banks from erosion and holds the Mississippi in its current place.

NREC is currently in the prototype phase of the project. The first of the lifting arms and a segment of the tying gantry have been built and are under testing. The lifting arms have passive alignment systems that align the mat squares with the correct location on the launch deck.

On the current mat boat, crew members are responsible for aligning, tying, clamping, and cutting the launch wires while walking on a moving mat deck. The new robotics remove a high percentage of these dangerous operations.

The robotics systems will be integrated on to the mat boat, which has been designed by Bristol Harbor Group. The mat boat is a double-ended raked barge with another rake along the length of the starboard side to allow the boat to get as close to the shore as possible. The mat boat will be larger than the one currently in operation to help accommodate the faster production rate.

Additional improvements have been made to the barge to increase crew safety and operational ease. Four deck houses, one at each corner of the mat boat, will allow operators to see the entire launch deck and supply barge operation as well as provide redundancy. The cable reels have been increased to hold more cable, which will reduce the number of times crew members have to splice and work with the cable. Electric hoists and monorails move the larger reels in and out of the reel alley.

The team has been working closely together to ensure a smooth integration of the systems as well as think of potential integration issues in order to try to mitigate as many as possible when the final design is built.

(Update, October 2019: the contract to build the specialty barge was awarded to Thoma-Sea Constructors LLC for $24.5 million.)