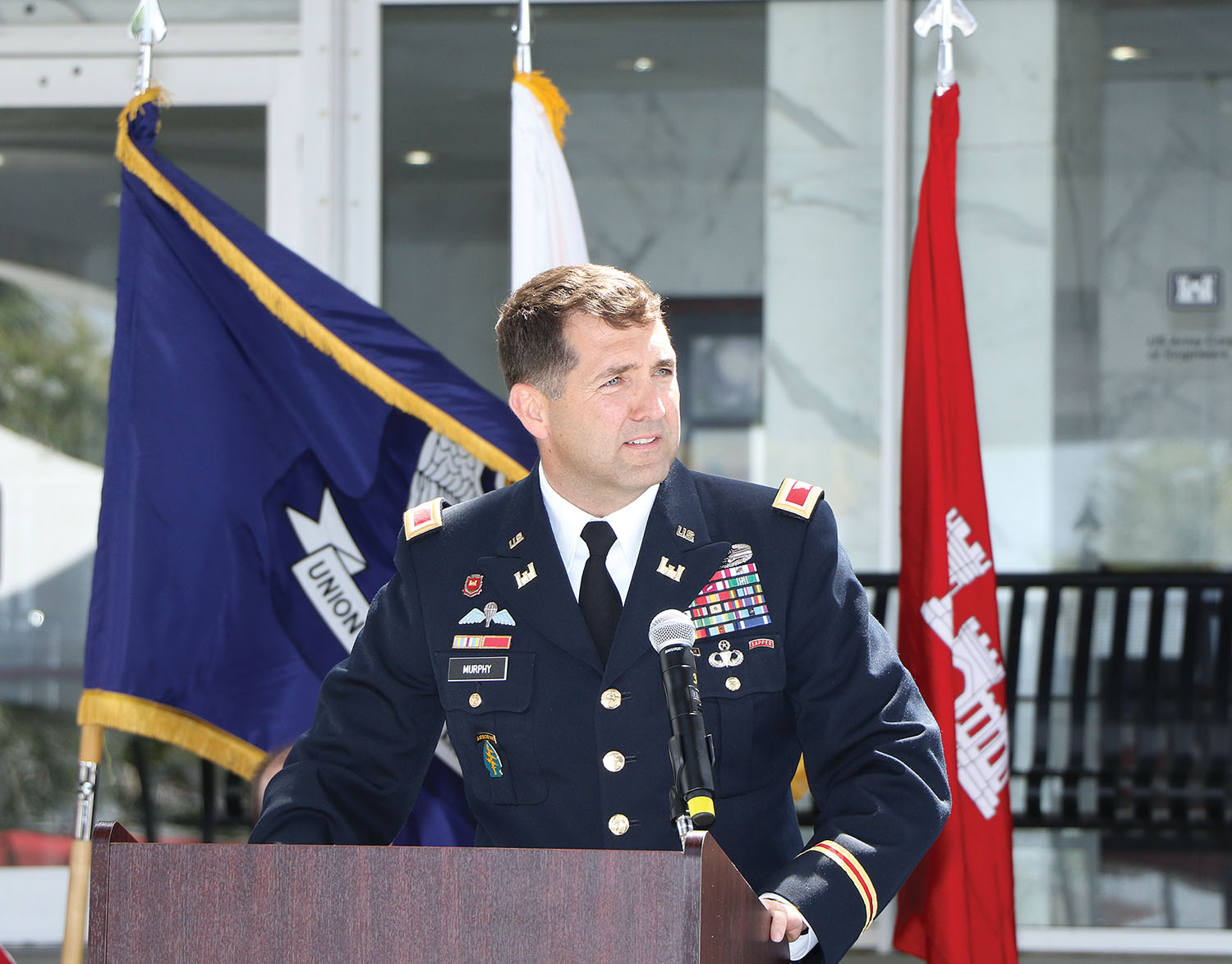 The New Orleans Engineer District held its change of command ceremony June 11, with Col. Stephen Murphy assuming command from Col. Michael Clancy. Murphy arrived from the Nashville Engineer District, where he had served as commander since July 2017. Clancy, who had led the New Orleans District since June 2016, will now deploy to Afghanistan.

To start of the ceremony, Hailey Clancy, wife of Col. Michael Clancy and a retired lieutenant colonel in the Army, and Nicole Murphy, wife of Col. Stephen Murphy, each received a bouquet of flowers in recognition and appreciation of their support and sacrifice. Following the playing of the Star Spangled Banner, Mark Wingate, deputy district engineer for project management and the senior civilian in the district, led the passing of the colors, which symbolized the transfer of command from Clancy to Murphy.

Kaiser praised Clancy for his three years leading the New Orleans District, a district that includes some 2,800 miles of waterways and the largest port complex in the nation stretching from Baton Rouge to the mouth of the Mississippi River. In three years under Clancy’s leadership, the New Orleans District achieved some 300 milestones, obligated close to $4 billion in work and oversaw the study and authorization of a 50-foot ship channel on the river all the way up to the Port of Greater Baton Rouge. The Corps also finished construction on three permanent canal closure structures and pumps at the mouths of New Orleans’ three major drainage canals.

“I’m amazed at what has been done,” Kaiser said. “But I think the most amazing thing he has done is he strengthened the ties of trust and faithfulness with our stakeholders, because you are the most important people here.”

Kaiser also praised Clancy for always navigating high water on the Lower Mississippi River by responding to the river itself and not pressures from the public. In particular, Kaiser was referencing operation of the Old River Control Structure, Morganza Spillway and the Bonnet Carré Spillway.

“We operate those the way they were designed, the way they were authorized, and we do it only when we have to,” said Kaiser, who as president of the Mississippi River Commission ultimately signs off on operating the spillways. “Trust me, that gentleman receives plenty of pressure to do otherwise, but he always did the right thing.”

Kaiser assured those living within and impacted by the New Orleans District that Murphy is an able 64th commander of the district.

“You have the benefit of an experienced commander coming to you,” he said. “I tell you, one of the most important things Steve did while he was in Nashville was absolutely strengthen and bind the ties with those stakeholders in the region.”

Addressing the crowd gathered for the change of command, Clancy was, first and foremost, thankful.

“To all the locals—parishes, levee boards, parish councils, state legislators, and a bunch of you guys are here—thank you,” he said. “It’s been a pleasure to get to know you. You showed me around South Louisiana. I had no connection to South Louisiana before coming here. To get an up close and personal tour with parish presidents, levee board presidents who showed me the bayous and the backwaters of Louisiana—it’s been fascinating and a lot of fun.”

Clancy also thanked his wife, who will remain in New Orleans as a chemistry professor at Loyola University while Clancy is deployed to Afghanistan.

“You’re my best friend, my wife,” Clancy said. “Thanks for joining me on this adventure down here in New Orleans.”

Clancy said this will be his fifth combat deployment. In his absence over the year ahead, he asked his New Orleans friends to “please take care of Hailey.”

Then, turning to Murphy, Clancy told him to get ready for a great experience in one of the nation’s richest cultural landscapes.

“It’s a fun place, with a lot going on,” he said, later adding, “Three years will go by fast.”

Finally, Clancy addressed the people of South Louisiana, challenging them to have a plan and listen to local leaders during high water events, tropical weather and other emergencies.

“And for God’s sake, get flood insurance,” said Clancy, triggering a roar of laughter.

Murphy said, in the weeks leading up to his command, he’s read about historic floods that have occurred in South Louisiana, including the 2011 flood and the Great Flood of 1927. He said that study helped him grasp how important the river is, not just locally, but nationally. He also called it a “battle-hardened district,” comparing it even to his four combat tours.

“I don’t say that lightly, but it just seems like it’s always in a fight,” Murphy said.

Murphy committed to partnering with stakeholders to accomplish construction projects in the queue, including the Comite River Diversion and a new line of levees along the western shore of Lake Pontchartrain.

Murphy also thanked his wife and children, who he said have moved three times in the last three years.

“While we’re all glad to be here in Louisiana, we’re just glad to join you because we’re ready to put down some roots,” Murphy said. “My son can go to the same high school, my daughter can go to the same middle school for a period of time.

Murphy said he knows there’s a lot to experience in South Louisiana, but he said he already knew what was first on their to-do list.

“I think the first thing we want to try is crawfish,” he said.