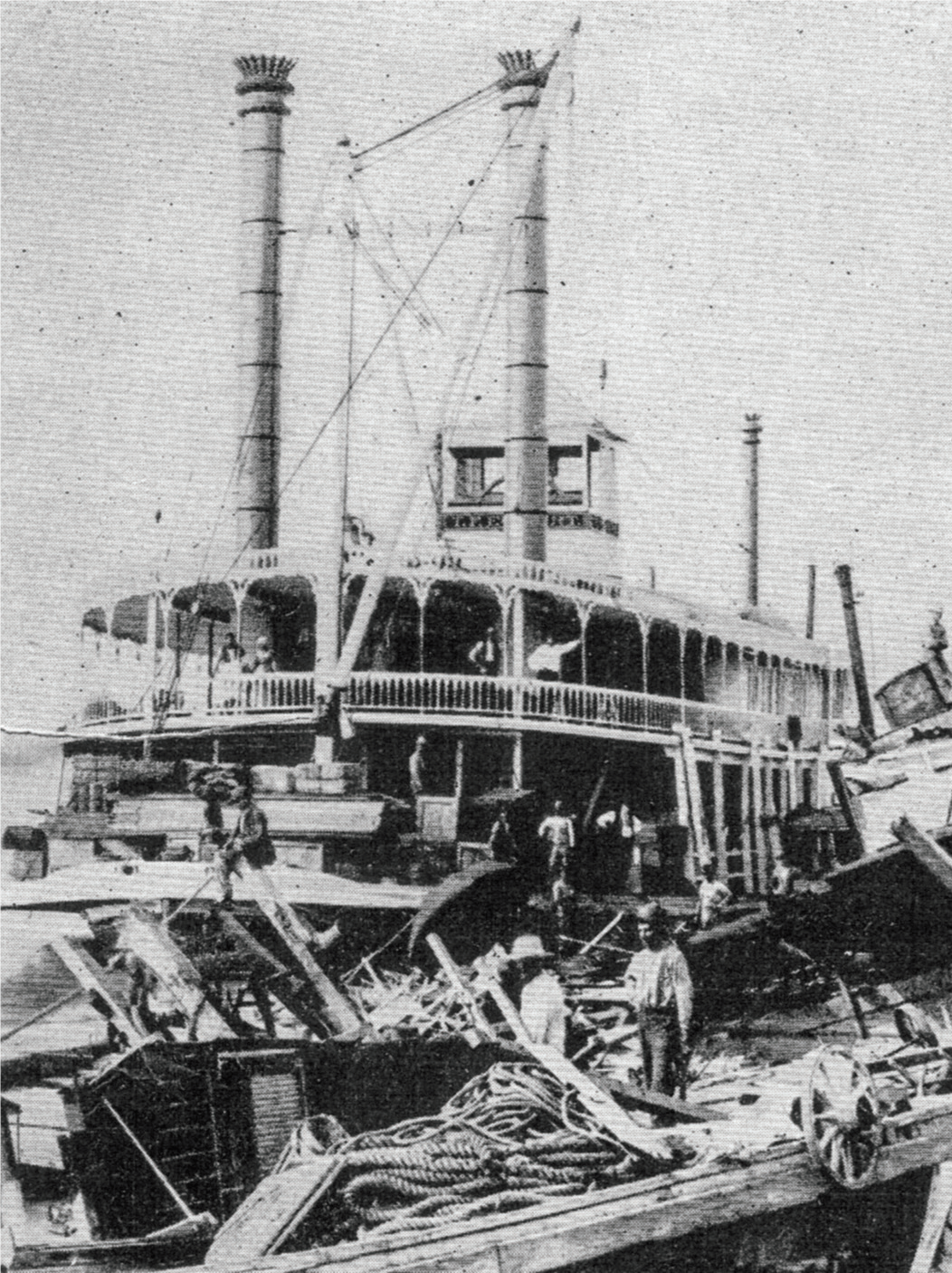 Well known on the Ohio, Mississippi and Missouri rivers as a salvage boat, the T.F. Eckert was built at Cincinnati in 1869. Constructed at a cost of $40,000 on a wooden hull measuring 176 feet in length by 34.5 feet in width, the sternwheeler made its trial trip on January 1, 1870. Four boilers supplied the steam.

The steamboat was owned by the Underwriter Wrecking Company of Cincinnati; Capt. Thomas F. Eckert was president of the firm, assisted by John Townley, secretary. The crew of the new boat included Capt. R.W. Dugan, master; Caleb Green, engineer; and E.A. Burress, mate. Capt. Al Burris was a diver who was noted for his association with the boat.

The duty of the vessel was to go to wrecked steamboats, principally for salvage work. After the Eckert departed Cincinnati following its trial run, the riverboat did not return to the city for nearly 11 years. During this time, either the Salvor No. 2 or the Eckert were reportedly at nearly every sunken boat on the three rivers served by the company.

In January 1877, the Eckert was mentioned in a Cincinnati newspaper as going to the wreck of the steamer Arlington at Smithland, Ky. In the spring of 1878, the boat arrived at New Orleans with the salvaged engines, boilers and other equipment from the packet Dawn, a sternwheeler that burned while downbound at Whitehead Plantation, 30 miles above New Orleans. The ultimate demise of the T.F. Eckert is unknown, although it was still on the government lists as late as 1886.

This week’s Old Boat Column image shows the T.F. Eckert tending the wreck of the steamer Montana, which struck the bridge at St. Charles, Mo., on June 22, 1884.

The Montana
The wooden hull (250 feet by 48.8 feet) of the Montana was built in 1879 at California, Pa., with the superstructure being completed at Pittsburgh. Four boilers provided steam to engines having 18-inch cylinders with a 7-foot stroke. The paddlewheel was 18 feet in diameter with 26-foot bucket planks.

The boat’s first trip, under the command of Capt. John Todd, was from Pittsburgh to Evansville, Ind., and return. The next trip loaded for Fort Benton, Mont., with 550 tons of freight, arriving at the destination on May 28, 1879. The sternwheeler was at Bismarck on June 30, preparing to reload for its third journey to Fort Benton, when it was struck by a tornado that stripped off the second deck cabin. The Dacotah (sister boat of the Montana) was also at the landing but escaped major damage.

Once repaired, the Montana continued making trips on the Missouri, but never again ventured to Fort Benton. The boat ran to New Orleans during the winter months, under the command of Capt. Edward Phillips, who was succeeded by Capt. George Keith. Upbound at the St. Charles bridge with Capt. William Rodney Massie at the wheel, the vessel was halfway through the span when it suddenly veered, struck a pier and sank. The local ferry boat John L. Ferguson came to the scene and rescued the passengers and crew.