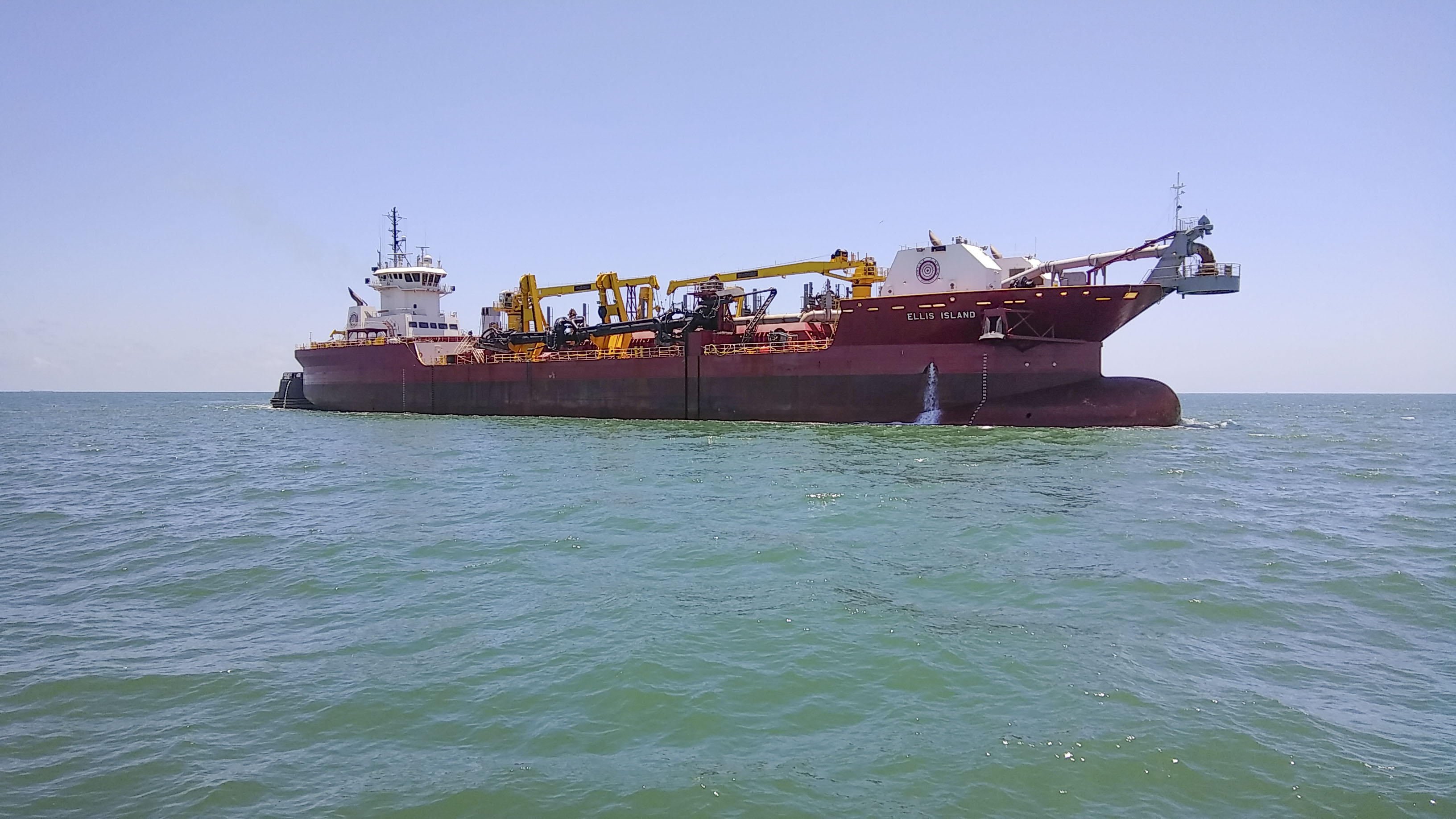 Work has begun on the first phase of the Corpus Christi Channel Improvement Project, which, when complete, will deepen the ship channel there to between 54 and 56 feet and extend the channel an additional 10,000 feet into the Gulf of Mexico.

Current cost estimates for the entire Channel Improvement Project (CIP) range from $360 million to $370 million, with the Port of Corpus Christi responsible for about a third of the cost. From a bond sale just a year ago, the port raised more than $216 million, with a portion of that set aside for the port’s cost-share.

The Galveston Engineer District awarded a $93 million contract in January to Great Lakes Dredge & Dock Company (GLDD) to deepen and widen a 7.6-mile stretch of the channel from the Gulf of Mexico to Harbor Island, just above the Port Aransas Ferry Landing. From the ferry landing to the start of the ship channel, GLDD will deepen the channel from 47 feet to 54 feet. Beyond the entrance to the ship channel, the company will deepen the channel to 56 feet.

“So far, the Terrapin Island has worked there, and the Ellis Island is working there now,” Hanson said. “The dredge Carolina also will be utilized.”

The Terrapin Island and Ellis Island are both trailing suction hopper dredges, with the Terrapin Island measuring in at more than 315 feet long and a hopper capacity of 6,400 cubic yards. The Ellis Island is part of an articulated tub/barge (ATB) unit, along with the tug Douglas B. Mackie. Eastern Shipbuilding Group delivered the unit in November 2017. The Ellis Island has an overall length of 480 feet and a hopper capacity of 14,800 yards. The Carolina is a 30-inch cutter suction dredge.

“The material varies from soft sands to highly compacted sands that have to be moved to nearby offshore disposal areas,” Hanson said.

The initial construction schedule called for completion of the entire channel deepening effort in seven years, but the Corps and port are working to shave some time and cost off the project. Hanson said the GLDD team, led by Steve Auernhamer, Gulf area manager, and Rick Elizondo, project manager, is working with the Corps to innovate on the first phase as well.

“We are working with the Corps on some efficiencies that will reduce the overall cost,” he said.

The process from conception to pumping sand has been a long one for the port. The Corps initiated a feasibility study for the project in 1990, but it took 17 years for Congress to authorize it. In 2017, the port and the Corps executed a project partnership agreement, allowing the port to contribute funds at the front end to jumpstart the channel deepening effort.

“It is actually the port that has taken the lead to provide funding to the Corps to get the job going,” Hanson said.

The channel improvement project has consistently garnered federal funding over the past year, with $13 million from the 2019 federal budget, $23 million in the Corps’ 2019 work plan, and $59 million in the Corps’ 2020 work plan. Most recently, President Donald Trump’s 2020 budget proposal includes more than $53 million for the project. Still, the port’s own contribution of $132 million dwarfs that of the federal government. Hanson said that’s a nationwide trend for waterway infrastructure projects.

“That is a similar story around the country where states and ports have provided money to get projects started, and then the federal government providing the money to complete,” Hanson said. “It is an interesting dynamic, but folks at all levels are starting to understand the important role their seaports and waterways play in economic development and job creation.”

Particularly in the case of the Corpus Christi Channel Improvement Project, the economic impact could be huge. Thanks to the December 2015 repeal of the federal ban on the export of oil, crude exports have become the Port of Corpus Christi’s No. 1 commodity. Earlier this year, the port was exporting more than 800,000 barrels a day. But with up to 2.6 million barrels in incremental pipeline expected in the near term, and with a local refining capacity of about 1 million barrels per day, port officials expect to see a surge in oil exports.

Just last month, Phillips 66 announced a pair of joint ventures to construct two pipelines. The anticipated 24-inch Liberty Pipeline (in conjunction with Bridger Pipeline LLC) would bring crude from the Rocky Mountain and Bakken production areas to Cushing, Okla. The forthcoming 30-inch Red Oak Pipeline (in conjunction with Plains All American Pipeline) will directly connect the Port of Corpus Christi with Cushing and the Permian Basin. Pending the permitting process, both pipelines could come online in the first quarter of 2021.

“These newly announced pipelines are pivotal developments in establishing the Port of Corpus Christi as the preferred gateway for U.S. crude exports,” said Sean Strawbridge, CEO of the Port of Corpus Christi. “These lines will add new North American crude slates such as Bakken, Niobrara/DJ Basin, [and] SCOOP and STACK to our already high-quality Permian and Eagle Ford barrels.

The channel deepening project will allow for two-way ship traffic of vessels up to Suezmax size, along with creation of an additional 200-foot “barge shelf” to allow two-way barge traffic. The port is also adding dock and storage space.

Besides all that, the port is also seeing a renaissance of steel production and petrochemical production, along with some $50 billion of private industrial investment in and around the Corpus Christi Ship Channel.

All that means that, while it’s been a long wait for the channel deepening to get underway, it couldn’t come at a more opportune time.