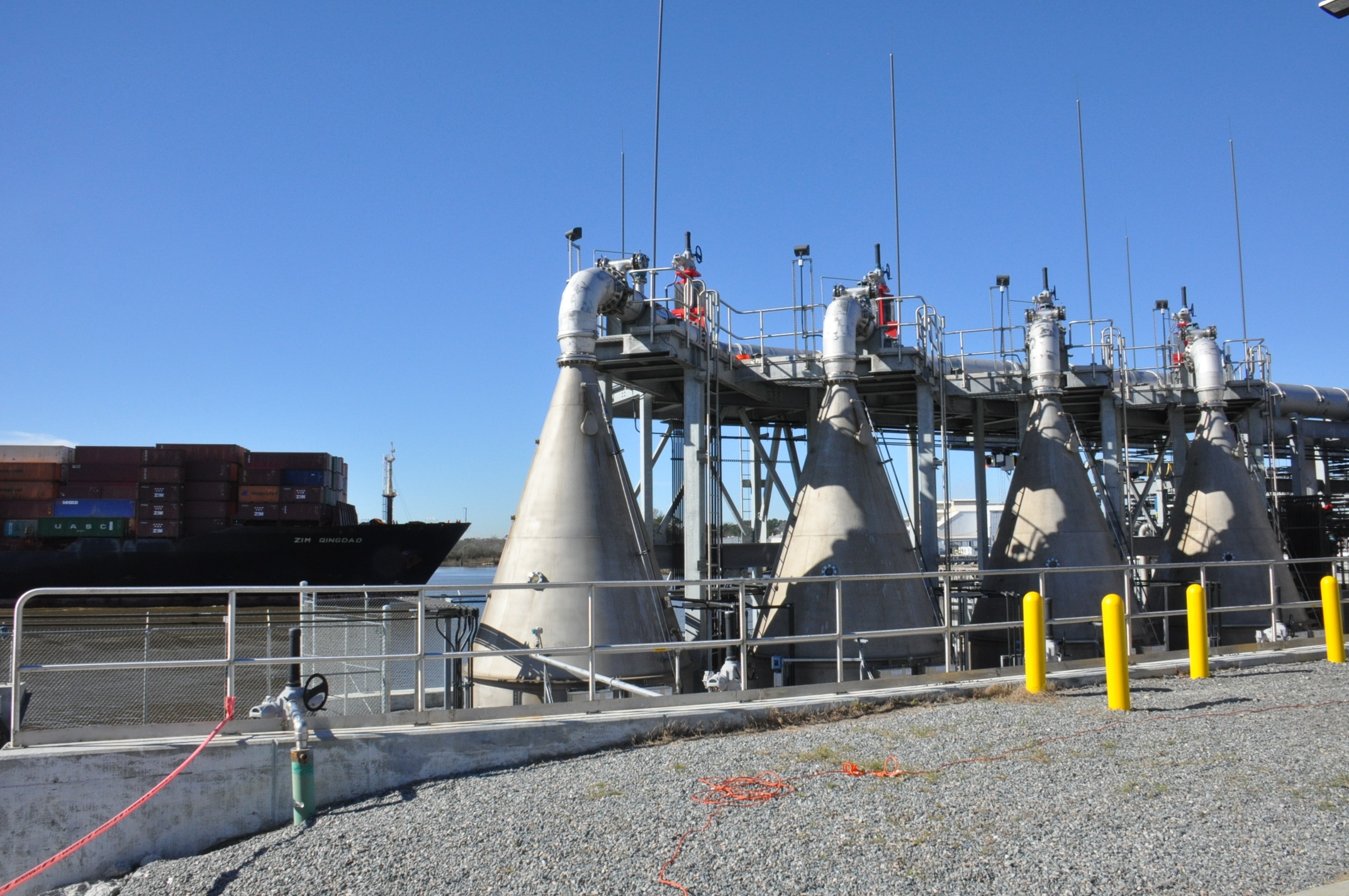 Oxygenating System In Savannah Harbor Expansion Is Largest To Date

The largest water oxygenation effort to date, costing about $100 million, is well underway as part of the Savannah Harbor Expansion Project (SHEP).

Engineering firm CDM Smith won the prime contract for the oxygenation system in July 2015. Construction and preparation of the sites began in 2016. In April of this year, the Savannah Engineer District announced that it had completed construction of the Dissolved Oxygen Injection System plant on Hutchinson Island. It began testing the plant in February to verify proper operation. The system will process approximately 150 million gallons, or 40,000 pounds, of water per day.

The concept and the technologies used are well-tested, according to project managers, and this is the largest scale project on which they have been deployed. The system is designed to deliver dissolved oxygen in the river that is lost as the U.S. Army Corps of Engineers deepens the harbor from its current 42-foot authorized depth to 47 feet.

The oxygen-rich water will compensate for the reduced oxygen levels resulting from the harbor deepening, specifically in the summer when oxygen levels in the water are lower. According to Savannah District spokesman Billy Birdwell, the system is designed to sustain and maintain current fish populations rather than increase them. “Our mandate is to keep what we have; that’s what the law instructs us to do,” Birdwell said.

The system consists of two plants and employs 12 Speece cones—also called aeration cones or oxygenation cones: four downriver at the Hutchinson Island site, and eight at the upriver site near Plant McIntosh in Rincon. Delivery of the cones began in December 2016. The Speece cones take in water and inject it with oxygen until a desired level is reached. The cone shape takes advantage of the water’s change in velocity. As the cone widens, the water slows. At the same time, oxygen bubbles are injected into the bottom of the cone. The bubbles rise against the counter-flowing water until the velocity of the down-flowing water equals the speed of the bubbles’ rise. At this point, the bubbles hover in the water flow as they slowly diffuse away. There is no off-gassing, and thus no loss of expensive oxygen.

Once the oxygenated water is returned, the tides spread it through the designated areas. The project area is tidal, making for good dispersal even into the lower reaches of the Savannah River, which reverses its flow with the tide. That’s important because many of the fish species the system is designed to sustain are spawning fish.

According to Darrell Wickes, a communications officer with the Savannah Engineer District, the downstream site is up and running; the upstream is 98 percent finished and will be completed by the end of the year. Joint testing of both sites together will take place again next summer.

As part of the testing phase, the Corps released dark-pink colored dye in the back river on February 14 and conducted another release event in the front river on February 21. (The terms “back river” and “front river” refer to areas around Hutchinson Island in the mouth of the Savannah River, according to Birdwell.) The dye is used to assist with tracking the path of the oxygen-injected water once it is released from the plant. The dye does not need to be visible to the naked eye to be tracked by sensors, Birdwell said. Corps officials told recreational boaters not to be alarmed, as the dye is not harmful to people, plants or fish. Testing was completed by early summer of this year.

The replacement of dissolved oxygen lost to the deepening of the Savannah River forms one of the environmental mitigation actions taken by the Corps for SHEP.

“The SHEP project is unique among Corps projects,” Wicke said. “Most Corps projects have only one permitting authority: the Corps itself. The SHEP project has three additional ones: the Environmental Protection Agency, Department of the Interior, and the Department of Commerce. In a typical Corps project, environmental mitigation accounts for about 10 percent of the total project cost. With SHEP, it’s about 50 percent. That’s one reason why mitigation is so strict.”

The other agencies are also helping with parts of the project. One of the mitigation efforts is the construction of a fish bypass upstream at the New Savannah Bluff Lock and Dam. Fish and Wildlife Service “fish engineers” are helping design that, Wicke said.

The total project cost estimate of the SHEP is currently $973 million, according to its website. Great Lakes Dredge & Dock Company was awarded a $134.5 dredging million contract as part of the project.

The SHEP is expected to net more than $282 million in annual benefits to the nation and has a benefit-to-cost ratio of $7.30 for every $1 invested. Costs of the studies and construction are shared between the federal government and the state of Georgia.