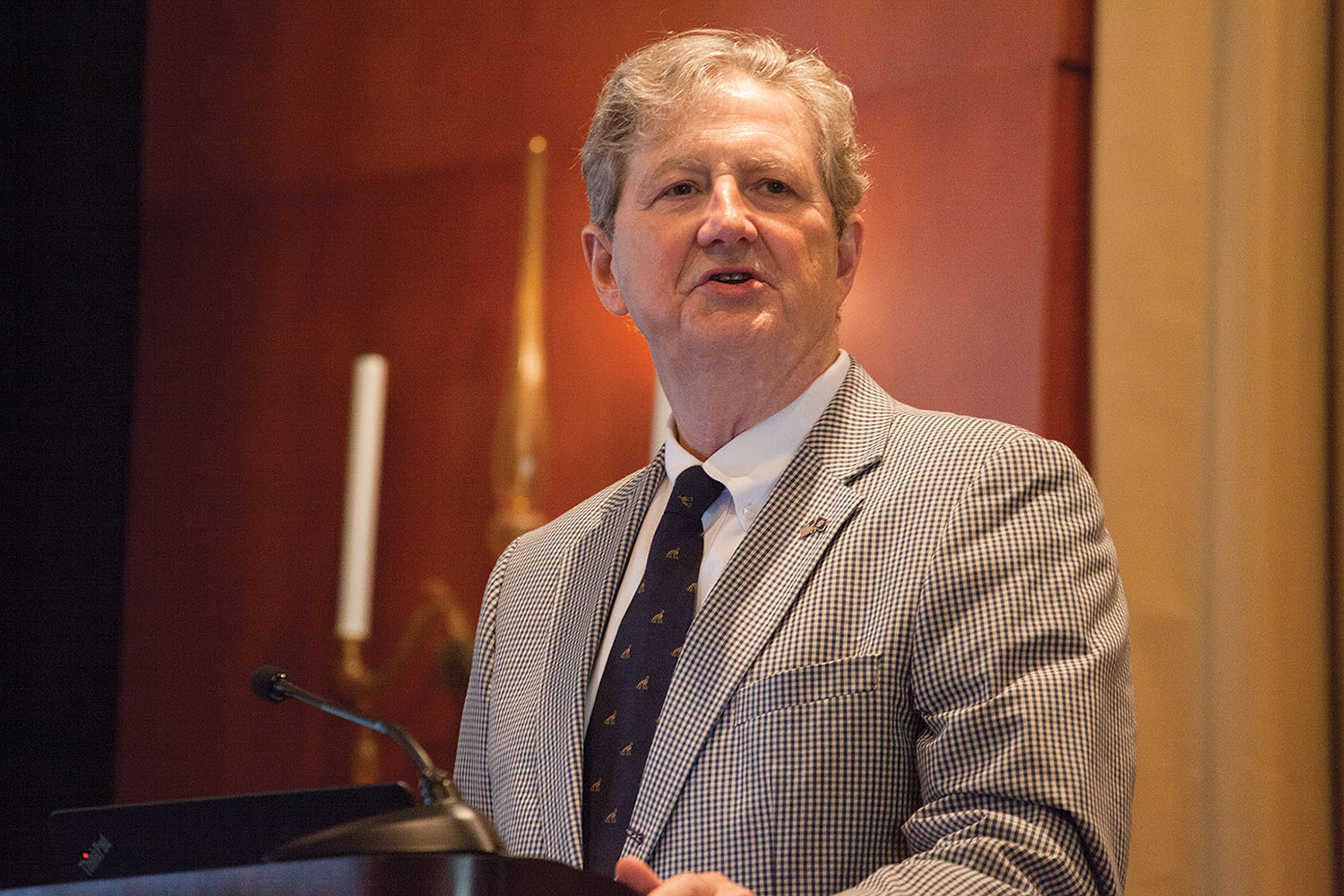 The 114th annual Gulf Intracoastal Canal Association (GICA) seminar opened with an address by U.S. Sen. John Kennedy, the junior Republican senator from Louisiana known both for his stalwart support for the maritime industry and for his down-home, witty one-liners. The former Louisiana state treasurer was elected to the U.S. Senate in 2016.

Kennedy serves on the Senate Appropriations Committee, including the subcommittees on energy and water development and homeland security. He also serves on the committees on banking, housing and urban affairs; budget; judiciary and small business and entrepreneurship.

“He’s made a lot of progress for our industry in a very short time,” said Spencer Murphy, general counsel for Canal Barge Company.

Kennedy overviewed legislative accomplishments since he took office in January 2017, first pointing to the Tax Cut and Jobs Act passed in December 2017. Gross domestic product in the United States has grown by 3 percent to 4 percent annually since then, Kennedy said.

“We have the best economy since Woodstock,” claimed Kennedy, who added that he did not attend the 1969 music festival.

Unemployment has fallen to a historically low level, with joblessness among the African American and Latino communities at all-time lows, according to Kennedy. He also pointed to dramatic wage growth and productivity growth as evidences for the success of the 2017 tax bill.

Kennedy expressed his support for smartly deregulating the economy. He praised the Trump administration’s policy of eliminating two regulations for every new regulation and bemoaned the burden of the nation’s expansive rules and regulations.

“The cost of the rule ought to be less than the benefit of the rule,” Kennedy said. “We have about 185,000 pages of rules and regulations. It would take you three years to read those 185,000 pages at one time.”

Kennedy added that those rules and regulations are administered by the country’s “fourth branch of government,” which he called the “Administrative State.”

Later in his talk, Kennedy also praised the country’s investment in its military.

“Weakness invites the wars,” he said. “If we want a secure country, we have to maintain a strong country.”

Kennedy acknowledged his role in funding both the Corps of Engineers and the U.S. Coast Guard through his Senate Appropriations Committee membership.

“In the current budget, the Corps of Engineers has more money than it’s ever had,” Kennedy told GICA members. “We expect the Corps to spend it well and wisely, and I consider spending in the Corps to be an investment.”

He also admitted his regret for the government shutdown earlier this year, particularly the fact that Coast Guard members went without pay during the shutdown.

“I’m embarrassed that when we have the government shutdown … our military continues to get paid but our Coast Guard doesn’t,” Kennedy said. “We’re going to fix that.”

Kennedy also said he’s committed to continuing to help members of Congress and the administration to understand the importance of the Jones Act.

Kennedy said his goal is to be a straight shooter who remains connected to his home state.

Responding to questions from the audience, Kennedy said he supports ongoing economic pressure on the Maduro government in Venezuela. He blamed both Cuba and China for propping up the Maduro administration.

Kennedy was also asked about eliminating regulations and what he sees as the best path forward for regulatory review.

“The other problem in Washington, D.C., is nobody ever gets fired,” he added.