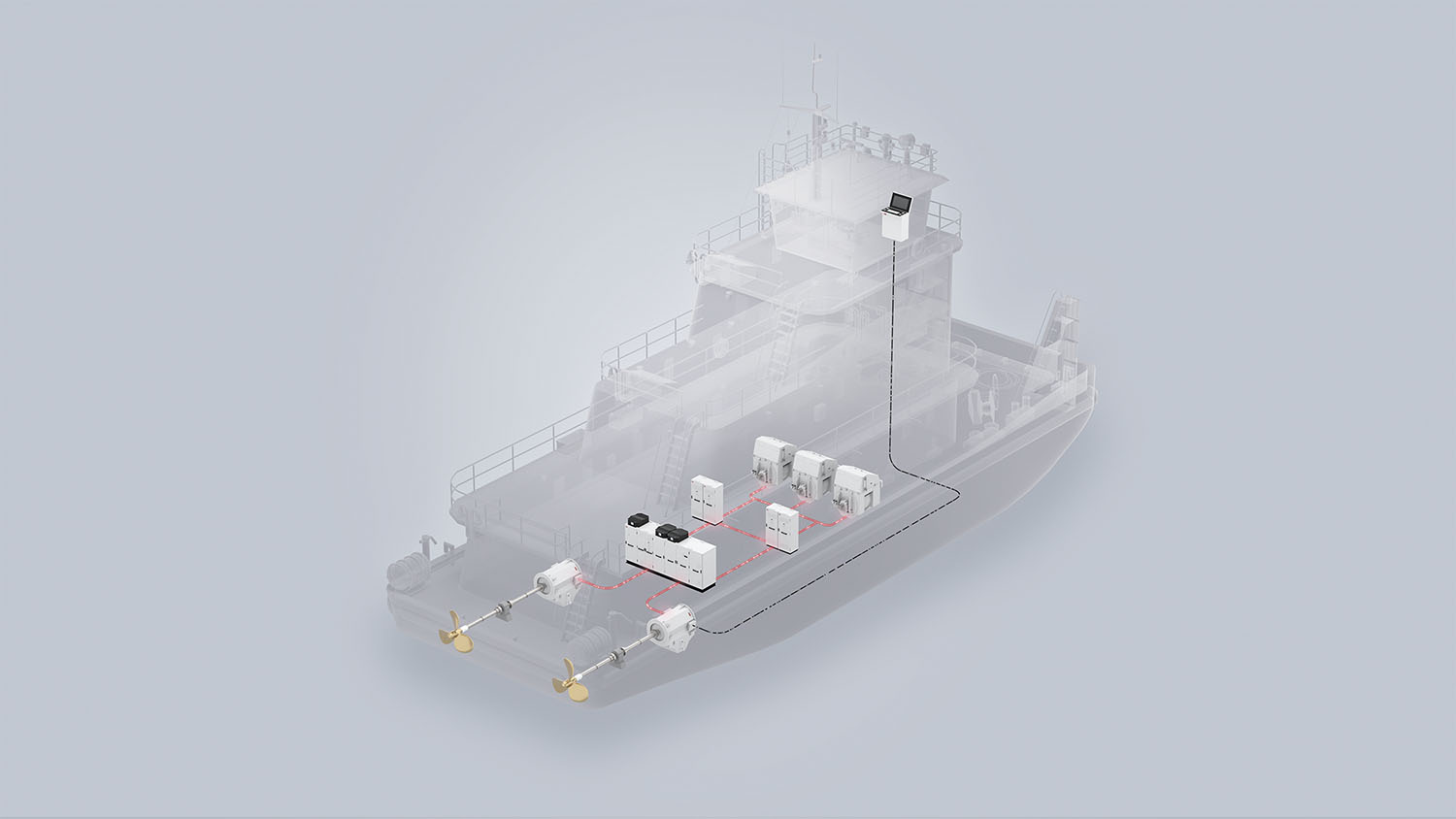 The U.S. Towboat Market Is Set To Go (Diesel-) Electric

Electric propulsion is already in widespread use, whether in the trains we ride, the cars we drive or the ships and boats we use to transport goods and people. ABB, for example, has supplied diesel-electric propulsion for more than 1,300 vessels worldwide. Owners of cruise ships, tankers, gas carriers, container ships, offshore vessels and tugboats, including some operating in the harshest conditions in the world, have chosen diesel-electric propulsion over mechanical equivalents for its greater efficiency, flexibility and reliability.

While green issues have played their part, vessel owners have chosen diesel-electric solutions for their superior fuel economy, system redundancy and operational flexibility, especially in the passenger ferry and offshore supply vessel market. Those same attributes have attracted the attention of U.S. inland waterway operators.

The sector can lay claim to having operated some of the first diesel-electric vessels in the 1930s, but it tends to adopt new technology only when it aligns with business opportunities. The adoption of steam propulsion, for example, coincided with the opening of river traffic on U.S. waterways, where dramatically reduced transit times helped to usher in the industrial revolution.

Today, an estimated 4,000 towboats operate along the rivers of the United States, hauling 25,000 barges and carrying 630 million tons of cargo along 25,000 miles of waterway every year. Utility providers rely on rivers for 20 percent of their coal, while about 22 percent of domestic petroleum and more than 60 percent of farm exports move on inland waterways.

The U.S. inland waterways industry is subject to the same commercial and regulatory pressures as other parts of the shipping industry. To meet EPA Tier 4 performance requirements, diesel-mechanical boats must add bulky, complex and hard-to-maintain aftertreatment systems—either exhaust gas recirculation (EGR) or selective catalytic reduction (SCR). These require the bunkering and storage of urea on board as well as additional piping and storage tanks.

Diesel-electric propulsion systems require no such remediation because they operate on conventional diesel fuel and produce fewer emissions. EPA Tier 4 emissions requirements can be met using a solution that includes multiple EPA Tier 3 generator sets, with no need for costly upgrades.

Mechanically-driven systems work most efficiently in a narrow operating range, typically above 60 percent MCR. Diesel-mechanical systems are usually optimized at a single point close to 90 percent load. Diesel-electric systems use variable frequency drives to deliver efficiency across a broader operating profile. This allows for greater flexibility in meeting the vessel’s power needs.

The ability of electrical motors to generate full torque at zero speed, for example, makes power immediately available with no requirement to over-torque, as is the case in the equivalent mechanical engine design. By reducing the number of engines running to an optimal number, diesel-electric propulsion also reduces the number of engine hours spent operating at partial loads.

For example, a vessel with three engines spending 40 percent of its operation time at less than 50 percent propulsion load can instead operate using two engines running closer to their optimum speed. This results in fuel economies when engines are under partial load. In cases where all engines are already running, the ETB can switch from low load to full load more quickly, a performance gain that will be discernible to the captain.

Redundancies also eliminate the risk of a single point failure removing a vessel from service. In mechanical systems, the loss of a prime mover leads to the loss of 50 percent of the propulsion, an entire shaft and the boat’s ability to steer. On the ETB, the loss of a generator set only results in the loss of 25 percent of the maximum available power, which is still delivered to both shafts. The diesel-electric system also facilitates multiple backups for electrical generation.

The vessel can be designed as a Z-drive, L-drive or conventional propeller vessel and has multiple prime movers—if an engine fails, the vessel can remain in service at a reduced capacity. In addition, ETB system redundancies are built in to critical components so that a single point of failure will not cause a total loss of propulsion.

ABB conducted a multi-year study of 500 pushboat vessels operating over a 365-day period. The study concluded that the true nature of pushboat operation is far from 100 percent continuous duty. Operating profiles vary greatly depending on vessel type, contract, time of year and rivers traveled. The number of vessels operating at over 80 percent load for most of the time was much lower than expected, while many spent the bulk of their time operating at below 50 percent power.

These findings highlight the impact of optimizing the number of engines running at any given time. The diesel-electric propulsion system includes generators, propulsion motors, low-voltage switchboards and automation. It can be optimized for whatever conditions the vessel experiences (e.g., standby mode, moving empties, full barge loads while travelling upriver, downriver or in high water). The system exploits variable frequency drives to optimize power use over a wide span of operations, control speed and torque, and enhance maneuverability for such specific operations as unit tows, fleet boats, locking river boats or canal boats.

Maintenance And Onboard Personnel

If a vessel only has one type of engine on board, as in ETB applications, the number of spare parts for both the vessel and shore-side support can be reduced. Further maintenance advantages for diesel-electric propulsion include:

• standardized and proven products supported by local service teams and backed by training programs from the vendor.

One objection raised to the greater use of electrical systems has been the lack of relevant knowledge and experience among marine engineers brought up on mechanical solutions. The modern towboat does not operate with an electrician onboard, so the equipment must be robust enough to operate with very little onboard interaction. Suppliers of such systems must provide training for operators to become familiar with the new equipment and to maximize availability with ongoing support.

ABB has supplied nearly 1,000 vessels whose onboard equipment is connected by satellite link to ABB Ability collaborative operations centers monitoring 24/7from locations around the world. These facilities monitor critical equipment data such as motor winding temperatures, the water pressure of the cooling system of propulsion drives, critical alarms values like RPM, power and torque, and events such as unbalances and the status of RDS system on board.

Having this critical information available enables remote diagnostics and condition monitoring, making it easier for inland waterway operators to comply with Subchapter M and reduce engine maintenance requirements and associated costs. Today, an engineer on board a boat can grant remote access to a technical expert sitting onshore to get a system up and running again. Predictive engine maintenance also allows major maintenance periods to be scheduled at owners’ convenience.

Predictive analysis can show that certain operations are leading to unnecessary wear and tear, and that adjustments could lead to less downtime, reduced use of on-call service engineers, increased operational performance and lower dry-docking costs.

For naval architects and shipyards, the main advantage of diesel-electric propulsion for vessel designers is flexibility. Diesel-mechanical systems are fixed by shaft lines and require most of the vessel’s weight to be consolidated aft and offset by additional ballast. Electric propulsion systems allow for the even distribution of heavy equipment throughout the vessel, opening up the design to better serve the boat’s operating profile.

Most propulsion system issues occur in the installation process. Oversights here can lead to issues that plague a vessel for its entire life. Accordingly, the propulsion supplier should take an active role in supporting the installation of its systems during the construction period, working closely with the shipyard to ensure proper in- stallation, set-up and commissioning of our system.

Ideally the diesel-electric propulsion supplier scope should include all the power generating systems (generators), power distribution, automation control and electrical power consumers (propulsion motors). This way, shipyards and owners have only one company to work with on the main electrical systems.

Diesel-electric propulsion is a mature and proven technology refined over decades for ease of installation, operational flexibility and fuel efficiency. The ETB concept also offers greater maneuverability and superior safety over conventional alternatives. For those owners looking to build a boat that will last the test of time over the next 30 – 50 years, diesel-electric systems allow for ease of upgrade for technologies that are just entering the market like batteries and alternative fuels such as hydrogen fuel cells.

The inland waterway sector has only begun to adopt diesel-electric systems, but given the benefits that accrue to ETB owners and operators, it is likely that diesel-electric propulsion will be the system of choice going forward.