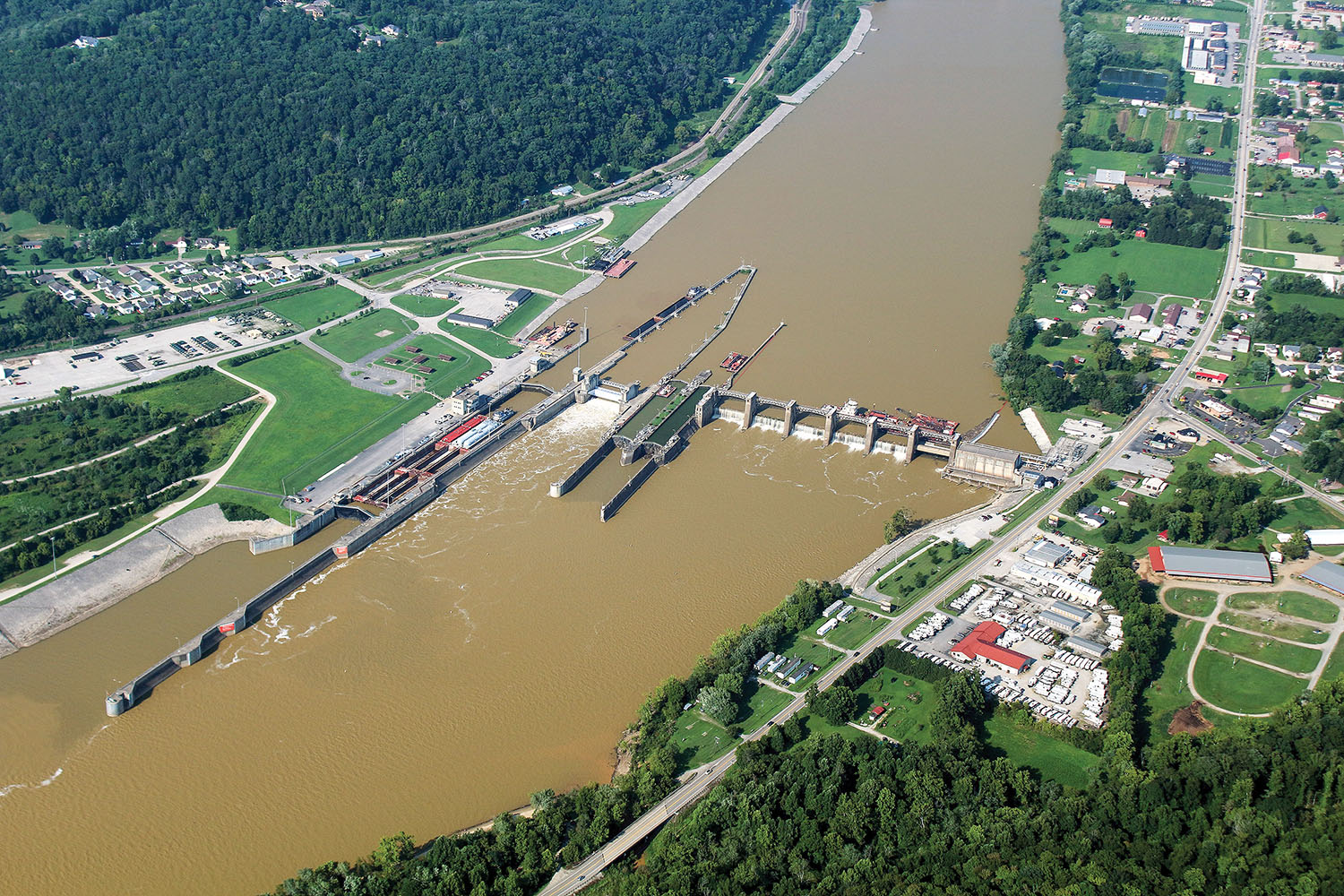 In November 2000, officials gathered to welcome an expanded port designation for the Port of Huntington (W.Va.) Tri-State. The port district was expanded from 14 miles in the city of Huntington to 100 miles of riverbank including the mouth of the Scioto River, 9 miles of the Big Sandy and 90 miles of the Kanawha River , allowing the district to claim the title of “largest inland port” for several years.

That title was eclipsed several years ago by the Ports of Cincinnati and Northern Kentucky, which increased its own designated port area. But the main factor in the reduced status of Huntington/Tristate has been the decline of coal, the waterborne cargo that dominated the river valleys here for decades. In recent years, local coal-fired plants have been either closing or converting to natural gas at a record rate, leaving local communities struggling to reorient in many cases.

According to Bill Barr, vice president of safety and compliance at Amherst Madison and executive director of the Huntington District Waterways Association, the number of coal terminals on the Kanawha river alone has dropped from 14 to five, and in the Ohio River part of the port district, from four to one. Total tonnage, mostly coal, on the Kanawha is down perhaps 40 or 50 percent from just a few years ago, said Barr.

As Bill Bissett, president and CEO of the Huntington Regional Chamber of Commerce, points out, the coal story includes two types of coal: thermal and metallurgical or met coal. It’s the thermal coal that has been declining as coal plants shutter. But barge movements of met coal in the region have actually seen an uptick in the past two years. That’s due to a combination of President Donald Trump’s efforts to support the coal industry and strong overseas demand for met coal.

“I wish met coal could be decoupled from environmental conversations,” said Bissett. “It’s still the only way we know how to make steel.” Export coal depends on a lot of factors, including price fluctuations. Those in turn have been affected by recent trade uncertainty.

Petroleum products have also been strong in the port district. According to Corps figures, in 2017, the Huntington/Tristate area moved more than 8 million tons of petroleum products, compared to 2.9 million tons in the Ports of Cincinnati-Northern Kentucky and 1.2 million tons in the Port of Pittsburgh. The Marathon refinery at Catlettsburg, Ky., on the western bank of the Big Sandy River near its confluence with the Ohio River, generates cargoes that transit through the Huntington-Tri-State area. It has a total crude oil refining capacity of 277,000 barrels per day, processing sweet and sour crude oils into gasoline, distillates, asphalt, aromatics, heavy fuel oil and propane. The refinery completed construction of a condensate splitter in 2015, increasing the refinery’s capacity to process condensate from the Utica shale fields.

As coal becomes less central to the region’s economy, the Corps is having to consider the ways it calculates and presents the benefits of waterways infrastructure. When oil or natural gas replaces coal as a cargo, the number of barges it takes to move an equivalent amount of energy goes down but the value of the cargo goes up. That makes tonnage alone an incomplete measurement of benefits.

Another result of the coal decline, Bissett said, is that regional economic development groups and chambers of commerce are learning to think more regionally and work together to promote the region in more innovative ways.

The decline of thermal coal doesn’t mean that there isn’t still plenty of cargo on the Kanawha. Patrick Donovan, chief of the Planning Center of Expertise for Inland Navigation, U.S. Army Corps of Engineers in Huntington, told The Waterways Journal there are plenty of positives in the region, including an increase in petroleum and aggregate cargoes.

Winfield Locks and Dam, located on the Kanawha at Winfield, W.Va., 31.1 miles above its mouth, recently completed repairs to its upper miter gate anchorage 25 days ahead of schedule.

At the request of the towing industry, the repair closure at Winfield was coordinated with closures and dewaterings of the main lock chambers at Willow Island Locks and Dam and Robert C. Byrd Locks and Dam. The Byrd Lock and Dam is expected to reopen September 27, and Willow Island November 1. Both those locks are using auxiliary locks to move tows through during the dewatering.

Lockmaster Chris Gress told The Waterways Journal that the Winfield repair work saved time through innovative techniques. “We did similar work in 2015, where we had to excavate the complete anchorage 12 feet down,” he said. “But this time, we changed the design of the anchorage so that we only had to excavate 5 feet down. We abandoned the old anchorage.”

“Amherst Madison sent a helper boat, and we were also using a tow-haul unit—something that used to be common, but that a lot of deckhands today are not familiar with.”

The 360- by 56-foot auxiliary lock, built in 1937, has never been completely rebuilt. “We try to keep it operational,” said Gress. “We dredged out the area beforehand and had to extensively prepare the auxiliary locks.” During the repair period, the auxiliary lock transited 305 barges in a total of 356 lockages. Most barges carried coal, but aggregate, chemicals and petroleum products were also moved through.

“Everything went very smoothly, and the most important thing was that no one was hurt,” said Gress. He credits Coastal Drilling East, the main contractor, and the many Corps personnel who contributed, some of them on loan from other districts.

The average transit delay was only 2 hours and 36 minutes, he said—a far cry from the 36-hour delays common when Gress became lockmaster in 1991.

Caption for photo: The Corps of Engineers recently completed a lock-repair project at Winfield Locks and Dam on the Kanawha River 25 days ahead of schedule. (Photo courtesy of Huntington Engineer District)