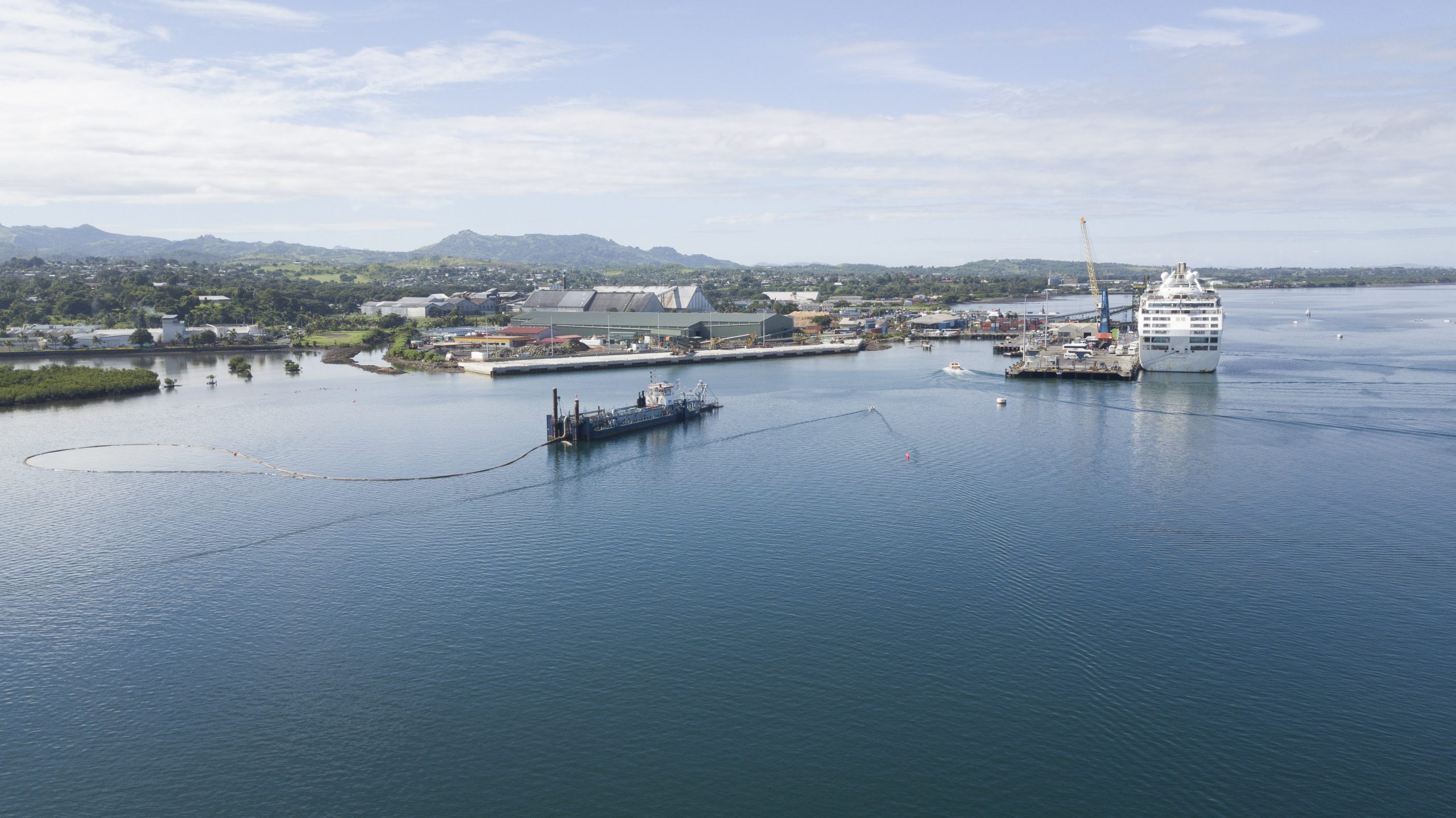 In May, Hall Contracting completed a project at Fiji’s first iron sand export facility. Dredging for the Lautoka Wharf project began in October 2018. In June, Hall Contracting also expanded its dredge fleet with the first Australian backhoe dredge, which started its work in Cairns at the Trinity Inlet shipping channel.

AMEX Resources operates Lautoka Wharf under a long-term lease with the Fiji Ports Corporation Ltd., which awarded Hall Contracting the project in January 2018. The dredging opened a new berth pocket at the wharf. The new export facility will be operating soon, allowing large carrier ships to call at the wharf. The facility will export mineral-rich black sand, mainly to China.

Hall Contracting performed the work with its cutter suction dredge Amity, a 79-meter-long (295-foot-long) vessel with a 750 mm discharge pipe.

The Department of Environment in Fiji oversaw permitting the project, which had strict environmental standards. Cameron Hall, CEO of Hall Contracting, said before it started work, nearly 12 months of preliminary work and studies had been done for the approval process. Namely, the environmental concern was over a sediment plume from the disposal area. Coral reef communities also needed to be monitored and protected during the project.

A deep-water location south of Bekana Island was selected as the disposal site. To minimize the plume, Hall used an underwater discharge pontoon in order to deposit material closer to the seabed. The project used visual monitoring and electronic data collection with in-water buoys throughout the project.

“Our team consistently met the parameters of the discharge permit, ensuring water turbidity was kept to a minimum and water quality remained at a high standard at all times,” Hall said.

Hall Contracting employed many local Fijian workers for the project. Twelve workers from Fiji formed the majority of the workforce, including dredge operators, mechanical engineers and deck hands on-board the dredge and support vessels.

Hall Contracting has a manager that lives in Fiji and identifies, engages and trains local workers. In additional to in-house training, the company helps the local workers obtain marine qualifications, such as certifications for boat operation, small dredge operations and marine engine

“We’re committed to providing employment and training opportunities in the Pacific Islands, and I’m pleased to report a number of our deck hands were upskilled throughout the project,” Hall said. He said working with locals also helps gain local support and acceptance for projects.

Hall Contracting has also set up a long-term branch in Fiji. It has been serving the Pacific Islands for more than 10 years with projects in Fiji, Vanuatu, PNG and Tuvalu.

At the end of June, Hall Contracting acquired Wommera, a Backacter 900, the largest Australian-owned backhoe dredge.

Hall said that market has traditionally been dominated by Dutch and Belgian dredging companies, and Hall Contracting’s fleet of solely cutter suction dredges was keeping them from working on some projects. Without the backhoe dredge, Hall Contracting was limited in capacity to undertake dredging projects with hard materials, such as clay or rock. In 2012, the contractor performed work where it encountered rock material and had to charter an outside backhoe dredge to complete the project. For many other jobs, the contractor had the right size cutterhead for the job, but the risk of hard materials on the seafloor kept it from tendering those types of projects. Now, the backhoe dredge can work in tandem with its fleet of cutter suction dredges, ranging in size from 250 to 800 mm.

The 65-meter (about 213-foot) Woomera has three bucket attachments – 18, 13 and 10 cubic meters (about 24, 17 and 13 cubic yards) – and a maximum dredging depth of 26 meters (85 feet). The buckets attach to the arm with pins, which are removed to change the bucket. This process takes about six to eight hours.

The dredge was unveiled in Brisbane in late June. From there, it relocated north to Cairns for its first job at the Trinity Inlet shipping channel for contracting authority Ports North. The widening and deepening work, which is part of a larger $127 million development project at the port, began at the shipping channel at the end of July and will be completed by the end of September.

The Woomera is removing stiff clays from the inner harbor, which will be transported via barge to Port North’s Tingira Street placement site. The Port of Cairns will use the material for beneficial use projects as fill for land development.