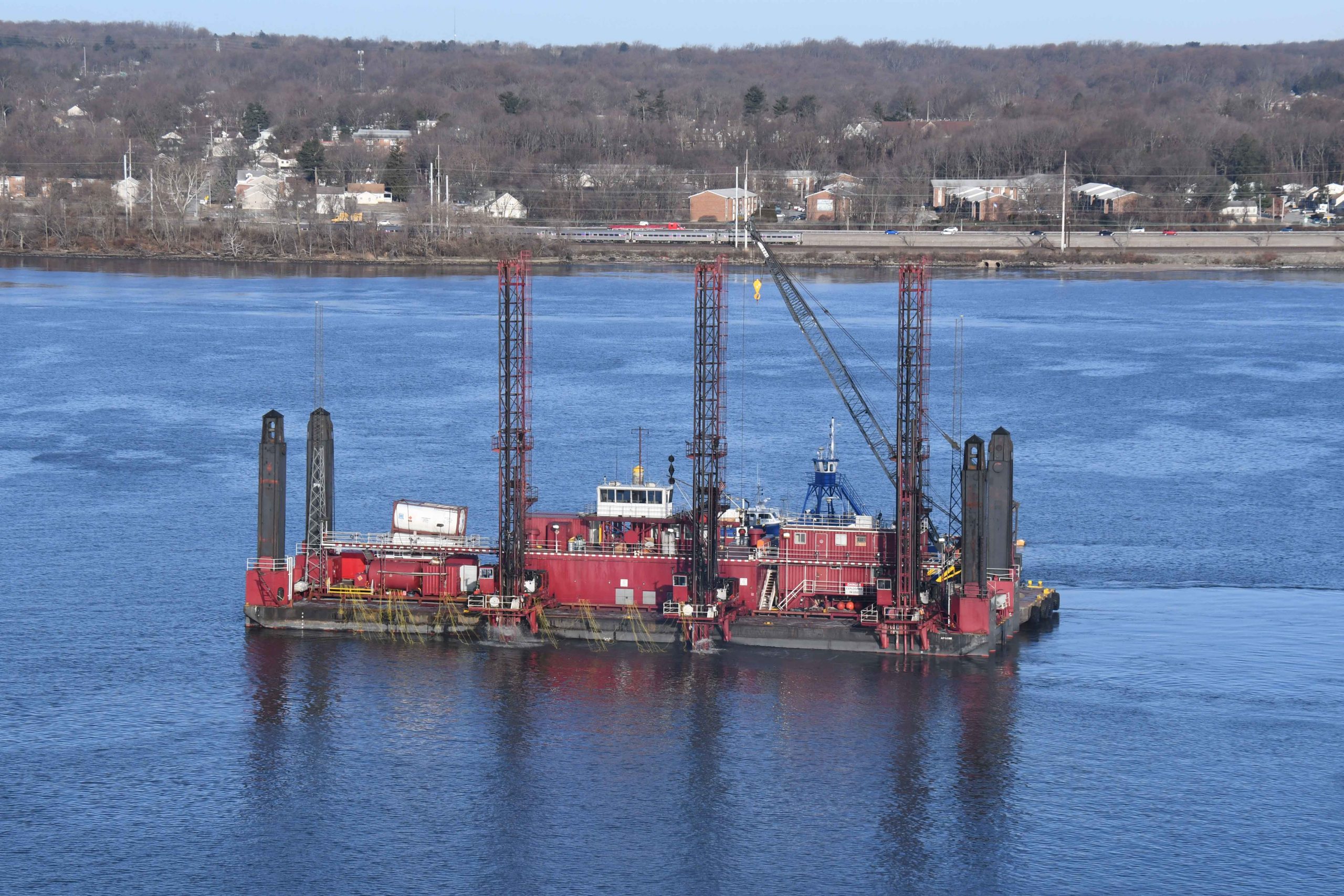 The final section of the Delaware River deepening project is nearing completion. This will close out work that began in 2010. The existing 40-foot depth of the river is being dredged to 45-feet over a span more than 102.5 miles on sections of river that border Pennsylvania, New Jersey and Delaware. Congress initially approved the project in 1992.

The first contract was awarded in 2010 and dredging began shortly thereafter, but two factors posed a challenge and pushed out the time frame for the project. First, the area is home to Atlantic sturgeon and therefore rock blasting is limited to the winter months between December and March. Second was funding. With budgets for dredging limited each year, the Corps could only contract out for what funding it had available. When Super Storm Sandy came through, money for the Corps was diverted to emergency projects slowing what could be done on the river.

“Sandy complicated things. Half a billion in contracts went to the Delaware and New Jersey shorelines limiting what we had available for the river. It (the deepening) was designed to be done in five years but lack of funding has really limiting the time we could dredge. We also only have a small number of firms that can do the size projects that we have,” Ed Voigt, chief of public and legal affairs for the U.S. Corps of Engineers Philadelphia District, said. He further commented that when the Corps opened bids for the seventh contract in 2014 it initially got zero responses. “This was our two-for-one project on the lowest part of the Delaware Bay that required deepening the channel and then also putting all the sand on a beach in Delaware for their dune project. There are so few companies that do the beach work that we got no bids,” Voigt said.

Delays drove up the cost too. The original budget for the project was $300 million but in the end the cost was closer to $400 million. Under a Project Partnership Agreement, that was signed in 2008, the Corps covered 65 percent of the cost, while PhilaPort (formerly Philadelphia Regional Port Authority) paid out the remaining 35 percent as the non-federal partner.

The Dutra Group took the next leg, using a hopper and bucket dredge along nearly 25 miles of river and removing 1.3 million cubic yards of sand, silt and clay. Norfolk Dredging wrapped up the last section of regular dredging, using its pipeline cutter suction dredge and a bucket to dredge 4 million cubic yards from 12.3 miles of the Delaware.

The bulk of material, about 12 million cubic yards was silt, clay, sand and gravel that was placed in federally owned upland confined disposal facilities (CDFs) in New Jersey and Pennsylvania. “We’ve owned those sites since the 1940’s. There’s lots of vegetation on them and each site is set up with different cells so in one location [newly dredged material] is placed in a cell next to what has already dried. We did all kinds of chemical and biological testing, and we test what’s going into the site and what comes out so we know any contaminants found are well within the state limits. This is all pretty clean,” Voigt said.

The final contract, still underway, is the most challenging as it involves rock blasting. GLDD was awarded a $76.8 million contract in September 2015 to do this final reach. Blasting was underway through last spring but had to be shut down for the summer environmental window for sturgeon. Work will start up again in December and will run until the work is completed or until the March sturgeon deadline.

Drilling and blasting are fairly routine but always a challenge according to Bill Hanson, vice president of government relations for GLDD. GLDD has developed a lot of experience working in New York and on the Delaware river project, led by Mark Reid, GLDD corporate sponsor who is an internationally recognized expert in drilling and blasting technology and techniques. The company has actually been drilling and blasting since the turn of the century. “What we do today is the same principal but a more sophisticated science. We use our drill boat Apache that has three drill frames mounted on it. Holes are drilled in a pattern and loaded with liquid explosives,” Hanson said. The technology on the Apache, he said, is very precise as to where and how drilling occurs and how much explosives are put in the holes.

The drilling process goes through most of the day and a blast is done at dusk, followed by more drilling throughout the night and another blast at first light. Blasting is prohibited at night due to safety issues.

Hanson said blasting in conducted by licensed blasters in a controlled area with many environmental regulations surrounding when and how it is done. “A sensor is set off underwater just prior to the blast to scare away any fish, and mammal watchers are in boats on the surface. Sighting of a mammal can slow down or stop a shoot,” Hanson said.

Although blasting sometimes gets a bad rap, Hanson said it is highly regulated and faster than using a hammer meaning less disturbance to the marine life over time. “Blasting is pretty underwhelming when you see it. You hear a rumble and then see what amounts to a large bubble. There isn’t the water fountain and explosive noise that people imagine,” Hanson said. The Corps has a video (https://www.youtube.com/watch?v=blhx0WiELEU) on its site showing one of the blasts from the Delaware project.

While drilling and blasting is the quickest way to remove rock, there were areas of the river where that was impossible due to the close proximity of pipelines or cable crossings. For these areas an 8-ton hydraulic hammer mounted on an excavator arm on the dredge New York was used. Hanson said this process is similar to jackhammers used in highway construction to break up the asphalt into smaller pieces that can then be removed. The New York has a bucket that can remove 12.8 cubic yards of rock with each pass.

While a slower process, the advantage of using the hydraulic hammer is that it can be used in the summer months as it doesn’t fall under the guideline for Atlantic sturgeon season. This has allowed GLDD to continue some work while blasting has been suspended until December.

GLDD is placing the removed rock at an offshore site in the Delaware Bay for use as an artificial reef. The location is about 60 miles from Philadelphia, Pennsylvania.

While the rock blasting has been an ongoing part of this project, it was originally to have been wrapped up this past year. However, ongoing Corps surveys found more rock.

“Unlike soil, the only way to find out how much rock is there is to first remove some and see what you’re left with,” Voigt said. Surveys are ongoing to gauge progress, but the process is random sampling of areas, not probing every inch of the river bottom. Voigt said it was likely the probe hit an area between rocks so it appeared the area was at a 45 foot depth, when the surrounding rock was at a lesser depth and in need of removal.  “There’s about 1,000 square feet or 100 cubic yards of rock above 45 feet that needs to be blasted and removed. We’ll go back this winter to clear that last bit,” Voigt said.

This is the fifth time the Delaware River channel has been deepened since 1898. It has been 40 feet deep since 1942. There are no plans to deepen the river further as the high cost of removing bedrock that would be present at greater depths likely makes the project economically infeasible.