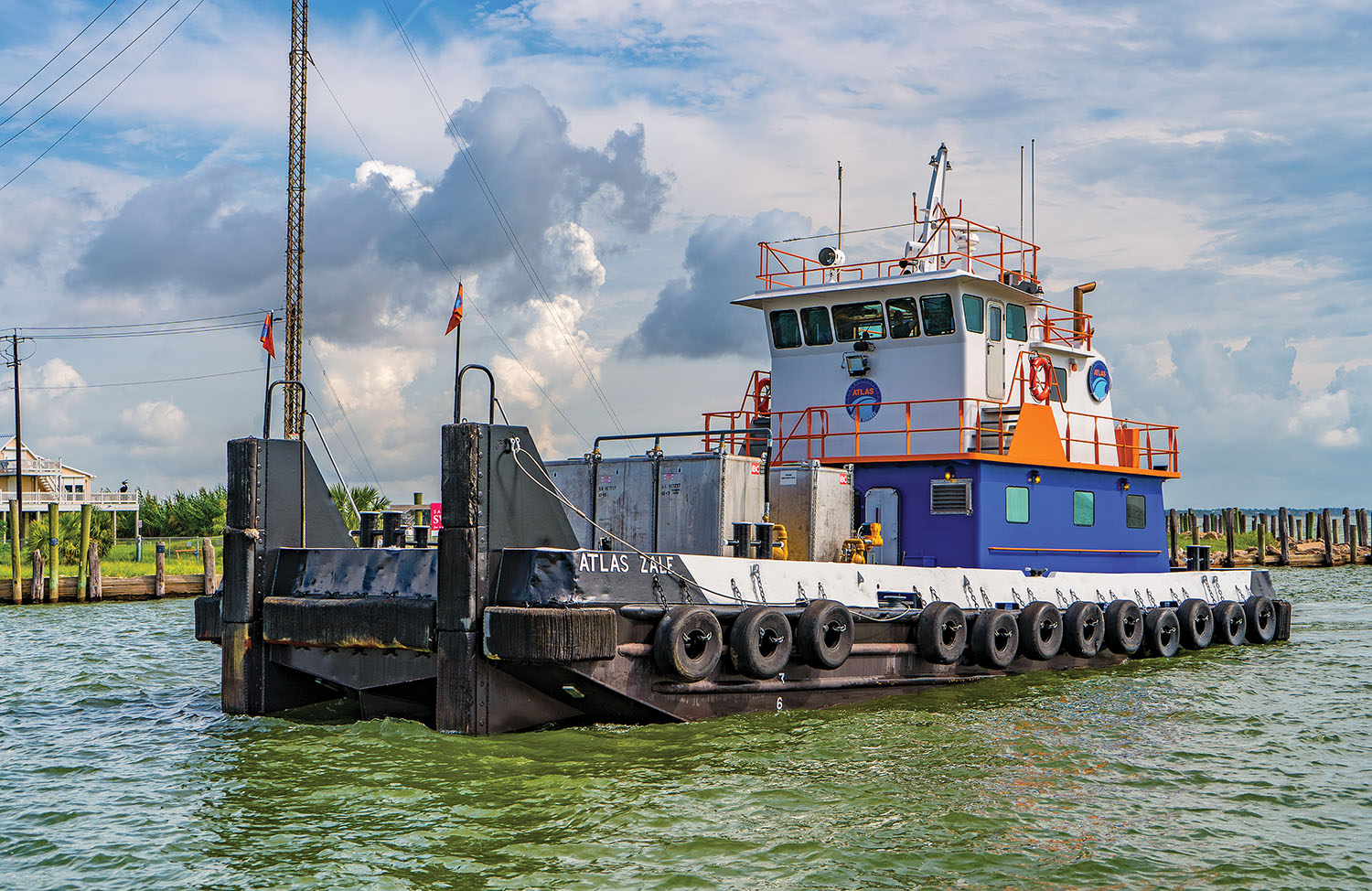 The Kemah Boardwalk, a 60-acre theme park with restaurants, rides and retail shops on Galveston Bay, served as the venue for a ceremonious event recently, the christening of the mv. Atlas Zale. The bottle-breaking was held there August 27 alongside the dock of Lighthouse Buffet.

The Atlas Zale is owned by Atlas Marine Services LLC, a subsidiary of Atlas Oil, which is one of the largest fuel distributors in the country with annual delivery of over 1 billion gallons of fuel to customers in 49 states, according to its website. Atlas Marine Services is based in Houston.

The boat is a lugger tug that was designed and built in 1997 by Sam Pellegrin and was recently rehabbed by Southwest Shipyard at its facility in Brady Island, Texas. The vessel measures 63.5 by 24 by 10 feet with a pilothouse eyelevel of 27 feet. It is powered by twin KT 855 Cummins engines with a total of 900 hp. Reduction is Twin Disc 4:1.

“The Atlas Zale is a full-service midstreaming vessel that is ideally suited to deliver cargo to our customers as it has the ability to carry heavy cargo on the main deck,” said Clint Werth, vice president-sales and logistics. Atlas Marine provides dockside and midstream fueling services including lubricant, bilge removal, fresh water, household trash removal and crew change services along the Houston Ship Channel and at dockside terminals along the Intracoastal Waterway.

Southwest Shipyard retained much of the interior of the deckhouse by preserving the original tongue-and-groove paneling on the walls and in the pilothouse. The deckhouse has two staterooms for a crew of four. There is a small galley. Ship’s service is provided by two 4045 John Deere 50 kw. gen sets.

The hull is protected by M&M Bumpers. Steering is accomplished by an Eagle Control system. Furuno electronics are from Premium Electronics and there are two Patterson 40-ton winches.

The bottle-breaking was performed by Sam Simon, who founded Atlas Oil in 1985, when, as a 20-year-old, he bought his first truck with a credit card to deliver fuel to tank wagon customers in Southwest Michigan.

The Atlas Zale is Atlas Marine Services’ first vessel and is supported by an elaborate, cloud-based fuel management technology that the company has developed to help captains monitor fuel usage in real-time and improve safety, efficiency and operational visibility for the marine industry. This patented technology comes equipped with sonar sensors to better predict refill planning, and provides multi-product fueling including lubricants.

The Atlas Zale utilizes an advanced RFID hose system to ensure that all hoses are working properly and replaced when needed, eliminating unnecessary product loss. This patented technology promotes a safer and cleaner fueling process than traditional fueling methods.

“We’re committed to customer success and are looking forward to servicing the maritime community throughout Houston, Corpus Christi, Port Arthur and beyond for years to come,” said Werth.