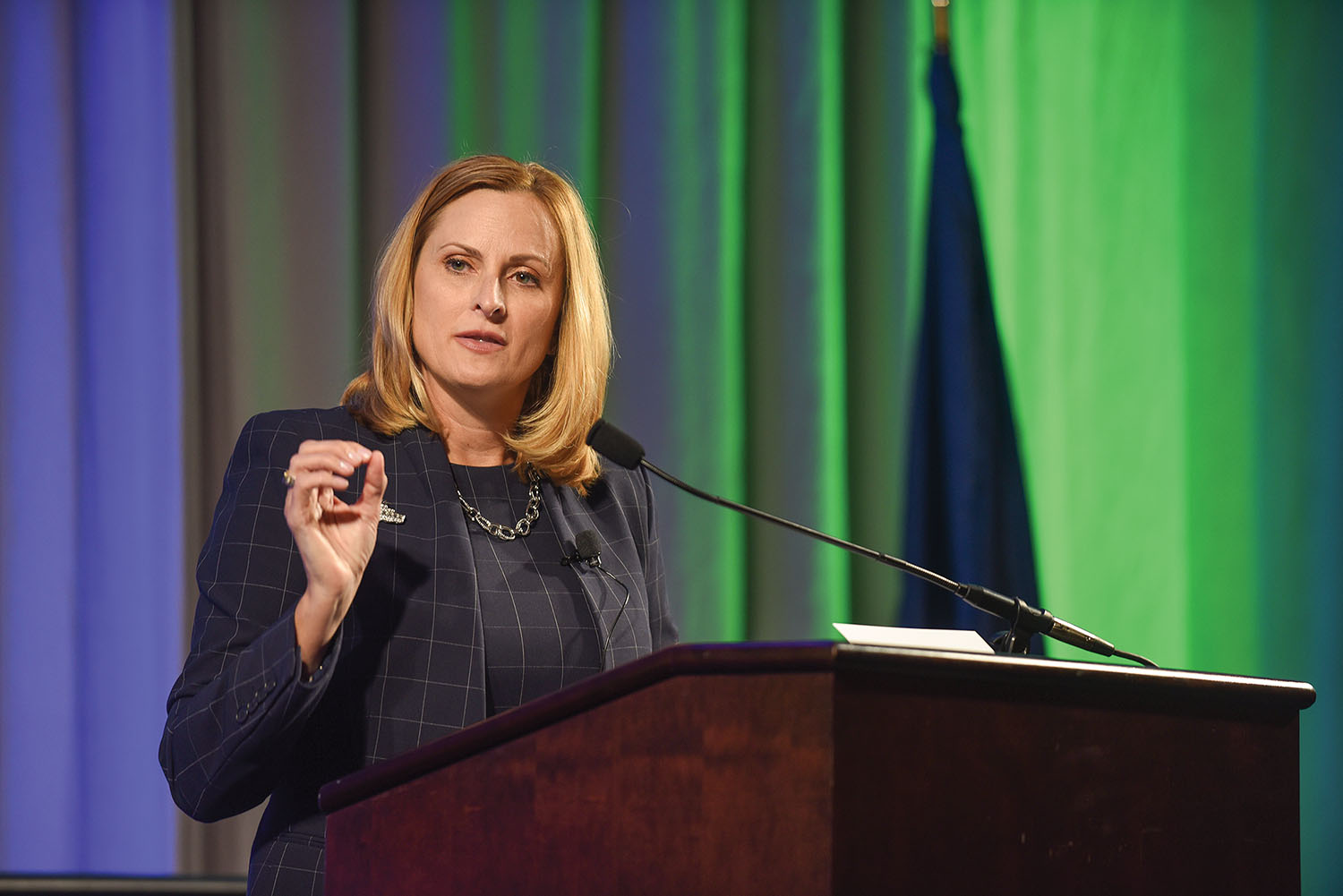 Christian began her presentation with its bold conclusion.

“Because of your efforts—our collective efforts—your Port of New Orleans is thriving,” she said. “But I am here to tell you we can achieve much more together. Opportunity is calling. Actually, opportunity is not just calling—it’s banging at the door and demanding that we answer.”

To highlight how the port is thriving, Christian surveyed Port NOLA’s four business lines of cargo, rail, industrial real estate and cruises. So far in 2019, the port has moved close to 620,000 twenty-foot equivalent units (TEUs) of containers at its Napoleon Avenue Container Terminal. That’s a new record and amounts to a 12 percent rise from 2018. That double-digit growth, Christian added, is bolstered by a 7.3 percent rise in loaded import container growth in 2019.

As part of her report on containers, Christian announced that beginning later this month, Maersk and ZIM will partner for MSC’s Lone Star Express to call weekly at Port NOLA. The new service will directly connect Port NOLA to markets in the far east. Christian said the new service will appeal to plastic resin producers and traders, furniture and retail importers and frozen poultry exporters. The service will feature transit times of 25 days from Busan, Korea, and 32 days to Busan. Port NOLA has one other direct-Asia container service, CMA CGM’s PEX 3 service.

“Asia is our fastest-growing containerized trade lane, and we appreciate the commitment from MSC, Maersk and ZIM to Port NOLA and our shippers,” Christian said.

To accommodate its container growth, the port is in the midst of a $100 million expansion plan at the container terminal that will bring four new 100-foot gauge container gantry cranes for greater efficiencies in working ships in the 8,000 to 9,500 TEU range.

Concurrent with the port’s infrastructure investment is the ongoing effort to deepen the Mississippi River from Baton Rouge, La., to the Gulf of Mexico to 50 feet.

Turning to the New Orleans Public Belt Railroad, Christian said the port and NOPB has already seen a 22.7 percent growth in intermodal cargo handling, fueled by Kansas City Southern’s new direct service between New Orleans and Dallas. Dwell time, Christian said, has been reduced from 19 hours to 14 hours, with 24 hours considered an industry standard. Christian also touted container-on-barge movements between Baton Rouge and New Orleans, which she called the most successful service of its kind in the country. The port expects to see Seacor AMH, the service’s operator, move close to 30,000 TEUs in 2019.

Christian rounded out her report from 2019 with a look at breakbulk, the port’s real estate holdings on the Inner Harbor and the city’s cruise market. While the port has seen an overall 10 percent decline in breakbulk because of steel tariffs, there has been an increase in wind energy-related cargo, nonferrous metals and natural rubber. On the real estate side, Christian said the port continues to move its Inner Harbor redevelopment forward, while also looking closely at expansion options on both sides of the river and throughout the port’s three-parish jurisdiction. Speaking of the port’s expansion plans, Christian was bullish on the plan to build a second container terminal in St. Bernard Parish.

“The combination of Napoleon and downriver container terminals would broaden our market options to serve small to large carriers and shippers and provide ample space for value-added logistics services,” she said. “Unrestricted air and water draft will put Louisiana in the best position of any port in the Gulf, and that is why our ocean carriers and operators are willing to invest with us. It is ours to lose by not answering that call.”

Christian said she hopes a third cruise terminal will not just boost the port’s cruise business but also be a boon for the area where it’s located.

“As part of our master plan, we decided to take a step back to assess multiple locations that could meet the needs of the industry, but also could allow cruise to serve as a transformational economic development catalyst,” she said.

Concluding her report, Christian said it’s crucial for the port and its partners to plan boldly for the future—and to take action now.

“Growing operations and infrastructure is expensive and does not happen overnight,” Christian said. “That is why we must plant the stake in the ground now, embrace our private partners and answer the call. I truly believe this is our time, the time for the re-emergence of the Greater New Orleans Gateway. It is absolutely ours to lose, so we must answer the call. Port NOLA cannot and will not be able to do that without commitment and alignment from each of you.”