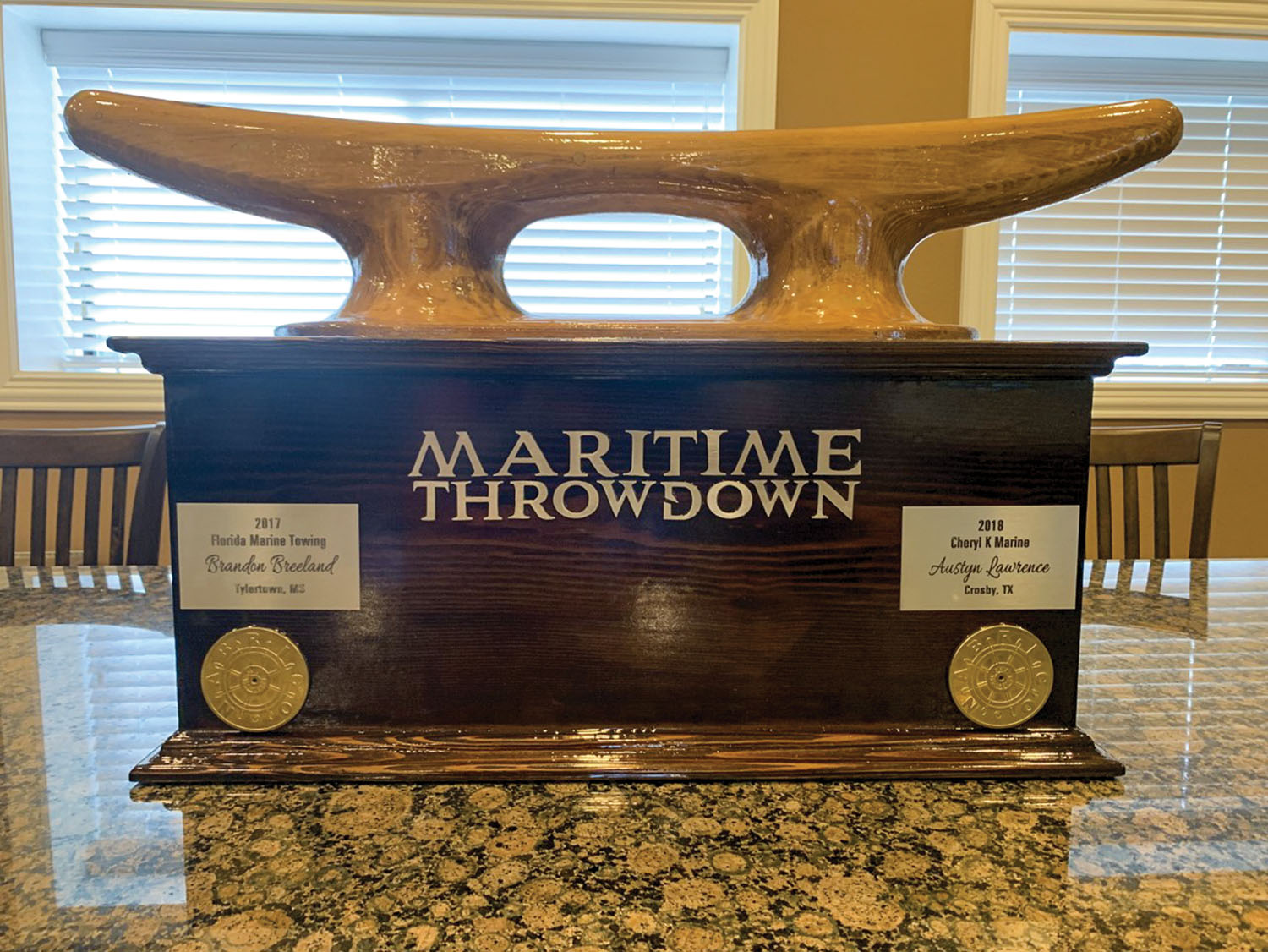 Maritime Throwdown Finals To Be Held At IMX 2020

Now in its third year, the Maritime Throwdown (MTD), an industrial maritime line-handling and line-throwing skills competition, has unveiled a massive new traveling trophy, which will reside with the winner’s company after future competitions.

The full-size wooden kevel mounted on a Maritime Throwdown-emblazoned block first traveled to Florida Marine Transporters in honor of 2017 MTD winner Brandon Breeland. After that, the trophy moved to Cheryl K Marine in honor of 2018 Maritime Throwdown winner Alexander Lawrence. The trophy will remain there until the 2019–2020 finals, which will be held May 18–20, 2020, in St. Louis, Mo., at the Inland Marine Expo (IMX).

The trophy was designed and built by Nabrico.

Founded in 2017 by Capt. Kenny Brown, the Maritime Throwdown promotes safety training and professional excellence through a series of competitions designed to simulate real-life scenarios on the nation’s inland waterways. MTD events feature three main competitions. The Aim Challenge is a distance throw where mariners attempt to catch a line on a timberhead. The C-Hero Man Overboard Rescue Pole Challenge is a safety-focused event where mariners compete while performing a simulated man overboard maneuver. Finally, the main Maritime Throwdown Course is a timed course with multiple mooring stations. Mariners hit a timer to start the course, then move from station to station securing mooring lines designed to simulate various situations. After finishing the course, mariners clear the line and hit a second timer.

Mariners interested in competing have three upcoming opportunities. On November 6, MTD will hold a Houston qualifier at San Jacinto Maritime Technology & Training Center. Space is limited. The winner will have a paid trip to compete in the finals at IMX 2020. Then on December 5, MTD will host a New Orleans qualifier at the International WorkBoat Show. Finally, an Upper Mississippi River qualifier will take place May 19, 2020, at IMX in St. Louis.

The finals will be held on May 20, 2020, at IMX, with the winner receiving a new 4×4 all terrain vehicle (ATV) donated by Inland Marine Services.

Mariners interested in competing can register online at www.maritimethrowdown.com.

Brown added that his organization is also developing a program for partnering with individual companies to train their deckhands and tankermen in line-handling skills crucial to operating safely on the nation’s waterways. Details, Brown said, are soon to follow.

Caption for photo: The new Maritime Throwdown trophy was designed and built by Nabrico