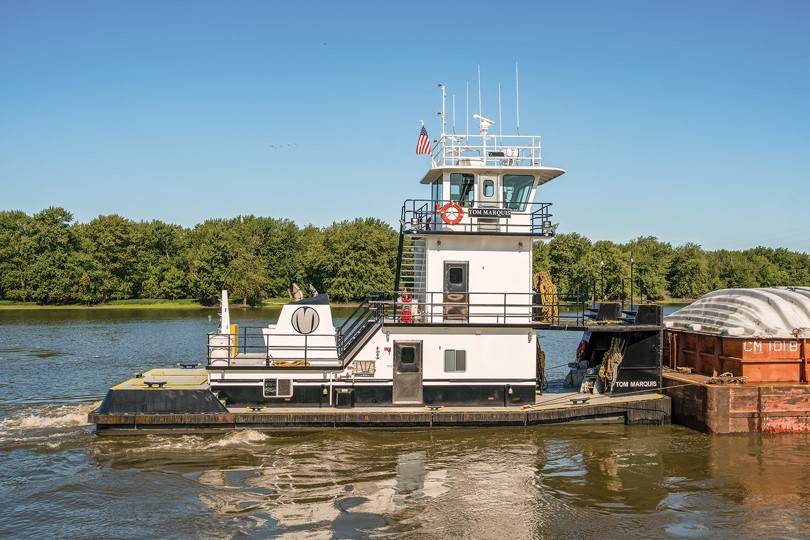 Marquis Energy, one of the world’s largest dry mill ethanol producers, christened a new towboat recently. The company held the ceremony August 16 at its marine facility in Hennepin, Ill., located at Mile 206 on the Illinois Waterway.

The boat, a harbor vessel built by Superior Marine Inc., South Point, Ohio, is named the Tom Marquis, after the company’s vice president, who manages the marketing and logistics department and is responsible for handling ethanol, distillers grain and corn oil barges. Growing up on a farm near the river with his cousin, Mark, who is CEO of Marquis Energy and with whom he developed various agricultural businesses, Tom was keenly aware of the advantages of river shipping, according to a company spokesman.

Thus, when the two entrepreneurs, and their business partner Denny Throneburg, decided to build an ethanol facility, they chose Hennepin because of its river location in addition to its proximity to a Class I railroad and interstate highways. The first plant came online in 2008, another in 2016, and today Marquis Energy is making over a million gallons of fuel grade ethanol a day and 3,000 tons of distillers grain.

Speaking at the christening, Mark said, “Tom Marquis is a vital founder and member of our company with over 25 years of barging experience and it is only fitting that our newest boat bears his esteemed name. The mv. Tom Marquis is the third boat in Marquis Marine’s fleet and will be used to locally transport our ethanol, distillers grains and corn oil barges.”

At the christening, Tom was joined by his wife, two sisters, and two of his three sons, who are also Marquis employees. Ben Marquis, media director, joined the company in 2008 and Alex Marquis, logistics manager, joined the team in 2012.
“I’m very proud of what we’ve been able to accomplish over the years,” said Tom Marquis. “The inland river system has been a key to our business for decades, and expanding Marquis Marine’s shifting and fleeting activity on the Illinois River will help support additional growth in the future.”

Boat Specs
The mv. Tom Marquis is 60 feet long by 22 feet wide by 8 feet deep. It has a normal operating draft of 6 feet and a pilothouse eyelevel of 27 feet, 6 inches. Designed by Bob McCune, president of Superior Marine, the new vessel is more heavily built than usual. The hull is constructed of ½-inch, ABS-grade steel with ¾-inch steel on the head log and bow corners.

“This is our tunnel-hull design boat,” said McCune. “The ½-inch stainless steel tunnels provide improved water flow to the steering and flanking rudders for maximum thrust and handling.”

Inside the hull is tankage for 8,000 gallons of fuel and 3,400 gallons of water. The living quarters include a full galley and head on the main deck and two staterooms on the second deck.

The new boat is driven by twin Caterpillar C18 marine engines producing a total of 1,200 hp. They turn Kahlenberg 60- by 48-inch, four-blade propellers on 6-inch shafts through Twin Disc MGX 5170 gears with a reduction of 5.03:1. The engines are cooled by Duramax coolers. Two Northern Lights 65 kw. generators provide auxiliary power. Steering is from a Skipper electro-hydraulic system.