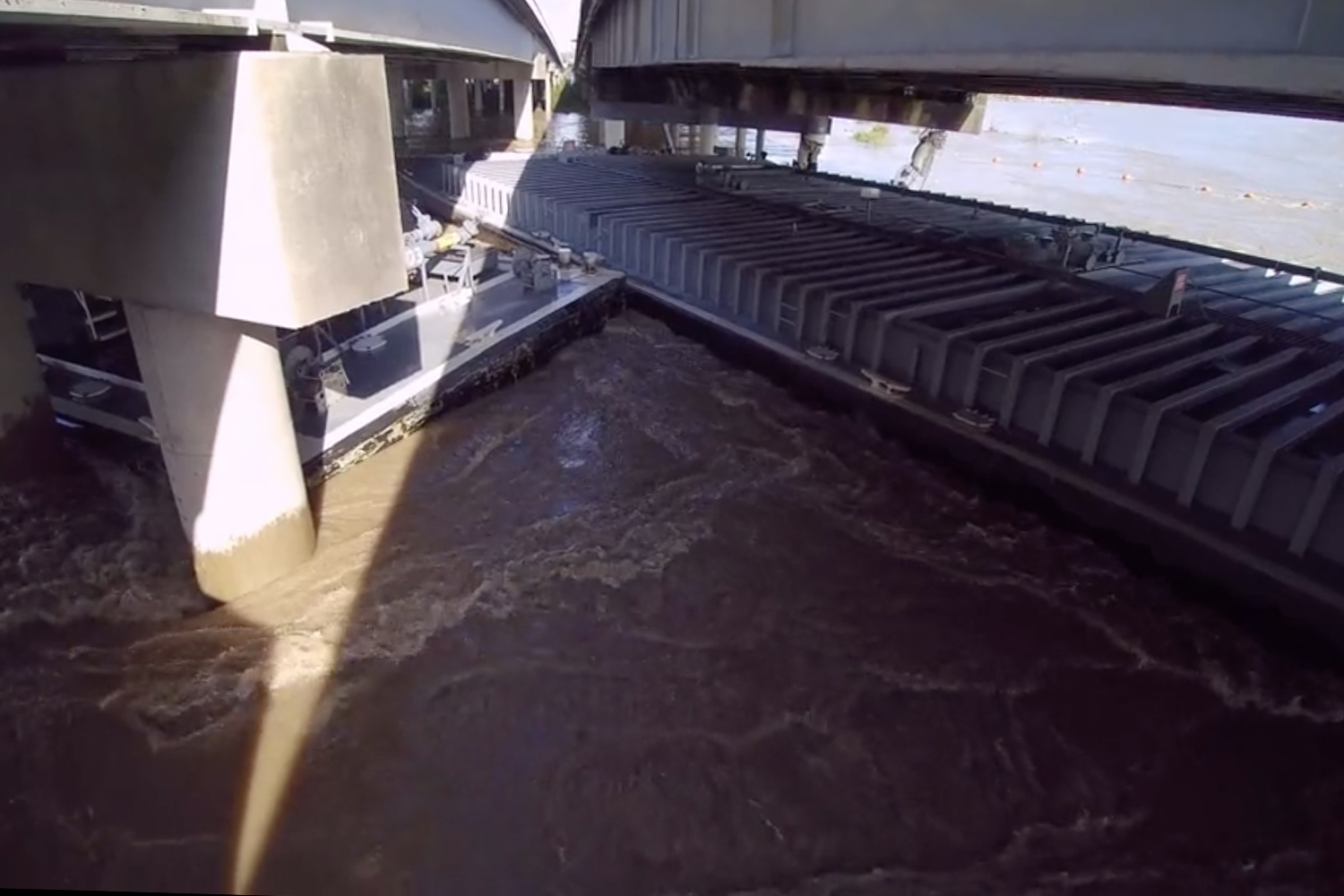 Barges Break Away On San Jacinto River, Damaging I-10 Bridge

Around midnight September 20, following torrential rain dropped in the Houston area by the remnants of Tropical Storm Imelda, nine barges broke away from their moorings at San Jacinto River Fleet, located just north of the I-10 bridge over the San Jacinto River in Channelview, Texas.

U.S. Coast Guard Sector Houston-Galveston, which received the report at about 12:05 a.m., dispatched an MH-65 Dolphin helicopter and a response boat to the scene.

Two of those barges, carried by swift currents in the San Jacinto River, struck the I-10 bridge, causing visible damage to at least two of the piers supporting the bridge. Just before 4 a.m., the Houston District of the Texas Department of Transportation (TxDOT) tweeted that all lanes on the I-10 freeway over the San Jacinto River were closed. By the afternoon, the interstate remained closed.

“Several barges have impacted the bridges at this location,” the agency said via Twitter. “This is a developing situation that is further enhanced by the river rising. No [estimated] time on reopening. Use SH 225 as an alternate.”

Harris County Sheriff Ed Gonzalez said via Twitter, “There is possible structural damage to the bridge, @TxDOTHouston will assess further this morning.”

The swift current in the San Jacinto River hampered inspection efforts at the I-10 bridge well into the day. By the afternoon, assessment efforts were underway.

Canal Barge Company owns the two barges lodged under the bridge. One, the CBC1403, contains naptha, while the other, the CBC193, contains monoethylene glycol.

Of the remaining seven barges, Ingram Barge Company owns five and Canal Barge owns the other two. The Ingram barges and one of the Canal Barge Company barges have been retrieved, while the last barge had run aground north of the bridge.

The Coast Guard has formed a Unified Command, which also includes Texas Department of Transportation, Texas General Land Office and Canal Barge Company. Agencies are monitoring water and air quality. There are no reports of pollution at this time.

The scene throughout much of the Houston area and east to Beaumont and even Southwest Louisiana was reminiscent of the aftermath of Hurricane Harvey in 2017. Some parts of the Houston area reported more than 40 inches of rain over a three-day period due to the remnants of Tropical Storm Imelda.

According to the Harris County Sheriff’s Office, by midday September 20, dispatchers had fielded more than 1,100 weather-related calls, 425 high-water rescues, 43 major accidents and 365 stranded vehicles. Houston-area law enforcement officials as well as volunteers were conducting water rescues throughout the day. Coast Guard Air Stations from Houston and New Orleans were conducting air rescues to the east in Beaumont.

As rainwater drained into area waterways, swift currents in the San Jacinto River down to the Houston Ship Channel led the Coast Guard to impose navigation restrictions. As of September 20, Vessel Traffic Service Houston-Galveston was requiring tows with loads to have an assist boat when operating between Lynchburg and the site of the Battleship Texas (lights 124 to 131) on the Houston Ship Channel. No overtaking was allowed in that stretch.