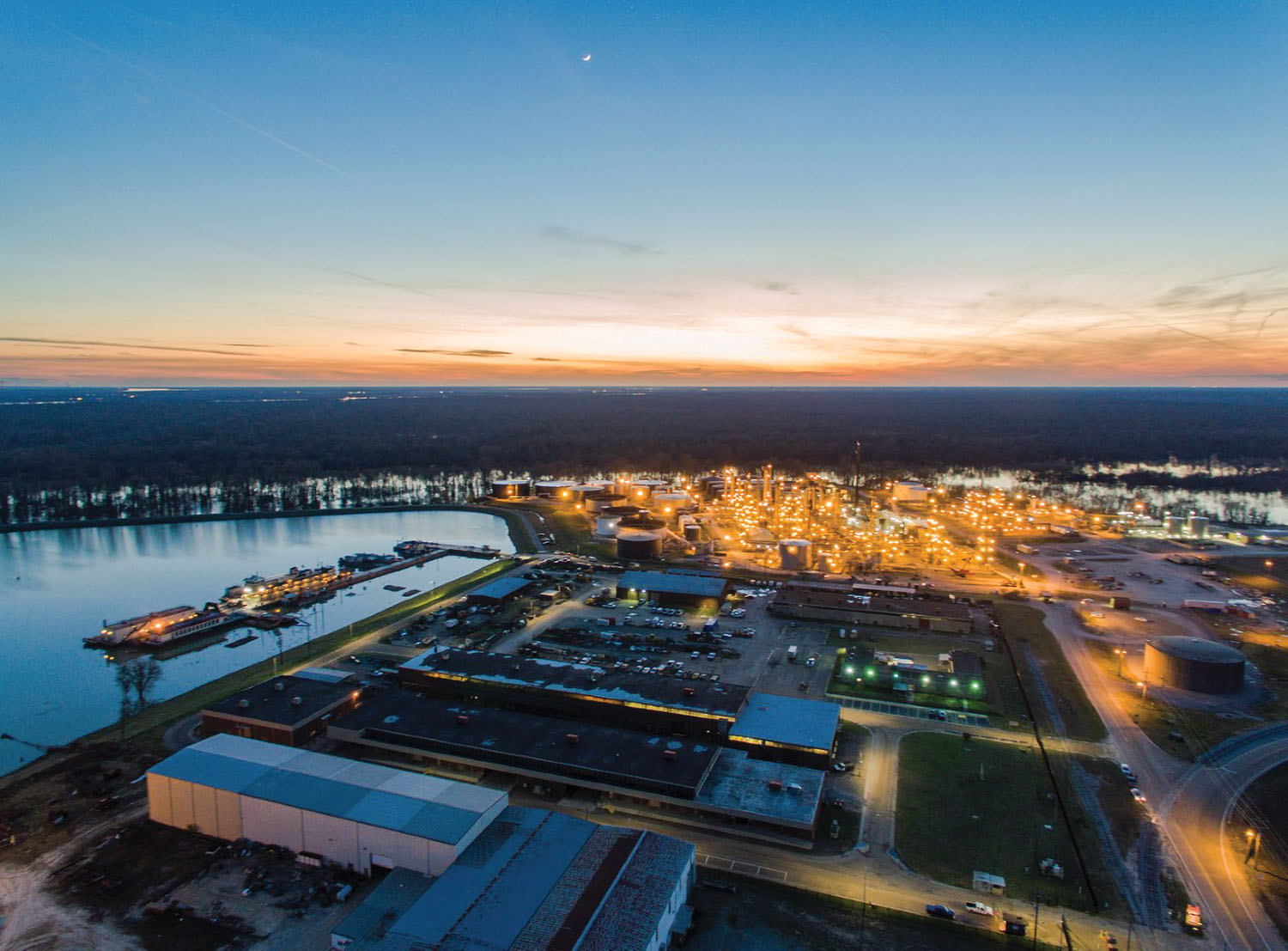 Vicksburg: A Center for Industry, History And Tourism

Tucked away just north of where the Yazoo River meets the Mississippi River, at the southernmost point of the fertile Mississippi Delta, lies the Port of Vicksburg, a well-developed industrial corridor arranged along an arc of the manmade Yazoo River Diversion Canal.

The port, owned by Warren County, Miss., and managed by the Warren County Port Commission, is located about halfway between New Orleans, La., and Memphis, Tenn. The slackwater harbor covers about 422 acres along a harbor channel that stretches 9,550 feet long, with a minimum width of 300 feet and a 12-foot minimum depth. Vessels access the harbor from the Mississippi River via a 4,850-foot-long approach channel.

The Port of Vicksburg specializes in metal, steel, aluminum and ores; wood chips, pellets and paper; petrochemical products; phosphate, fertilizer, grains and other agricultural cargoes; and refined products. The port handles about 3.1 million tons of inbound and outbound cargo each year, which makes it the 15th largest inland port in the country by tonnage.

Within the harbor, the Port of Vicksburg maintains a terminal, which Watco Companies LLC leases and operates. The terminal features a 150-ton crane, two 15-ton overhead cranes, and 129,000 square feet of insured and sprinkled warehouse space. The facility can receive and discharge cargoes regardless of weather. Watco also operates the port’s short-line railroad, the Vicksburg Southern Railroad (VSOR), which connects directly to Kansas City Southern’s rail service.

In addition to its vessel and rail traffic, the port, with its proximity to major north-south and east-west interstates, handles some 250,000 truck movements per year.

And while the Port of Vicksburg’s harbor is fully developed, with all but one of the available sites either sold or leased, port officials report that the city of Vicksburg is spearheading an economic study to identify how best to grow the port’s footprint.

For the Warren County Port Commission, it’s a success story that stretches back more than 50 years to the founding of the port in 1968. But Vicksburg’s maritime roots go back much farther than that.

“Vicksburg’s beginnings and its entire history are tied to the river,” Diaz said. “A historical river city, Vicksburg once became the richest and most celebrated city in the state of Mississippi. Its river made the city a protagonist of one of the decisive battles of the American Civil War, and since then, its economy, its culture and its people have continued to evolve along with its river.”

During the Civil War, both Confederate and Union leaders saw Vicksburg as, in President Abraham Lincoln’s words, “the key.” Confederate President Jefferson Davis reportedly called Vicksburg “the nailhead that held the South’s two halves together.”

At the time of the Civil War, Vicksburg was located at the lower end of a dramatic 180-degree bend on the Mississippi River. The city was well-fortified and well-armed, which made it difficult and dangerous for Union forces seeking to move troops and supplies by river below the city. Union Gen. Ulysses S. Grant actually envisioned digging a canal on the river to bypass the city. Instead, it was Union naval commander David Dixon Porter who would move enough supplies past Vicksburg in April 1863, which set the stage for the siege and battle later that spring and summer. Confederate forces finally surrendered on July 4, 1863.

And while Grant’s bypass canal never came to fruition, the Mississippi River dramatically changed course just 13 years later on April 26, 1876. The city, first settled in 1719 and incorporated as “Vicksburg” in 1825, named for Methodist missionary Newitt Vick, had been, in a day, cut off from the river that had made it so strategic.

The project took 25 years to complete, and the city of Vicksburg finally regained its connection to the river in 1903.

Today, Vicksburg’s connection to the Mississippi River goes well beyond the maritime industry. The city boasts a thriving passenger cruise business, with more than 100 passenger vessels docking at Vicksburg each year. Earlier this year, city officials announced tentative plans to build a cruise vessel terminal to serve Viking River Cruises’ Mississippi River vessels, should those become reality. Though Viking continues to build partnerships to launch a cruise line on the Mississippi River, the company has not announced any specific plans or a timeline.

Visitors to Vicksburg can discover the city’s maritime roots at the Corps of Engineers’ Lower Mississippi River Museum & Riverfront Interpretive Site on the riverfront along Washington Street. Part of that museum complex is the mv. Mississippi IV, a decommissioned towboat now residing onshore in Vicksburg. Visitors can explore the towboat to discover what life on an inland vessel is like.

Within the Vicksburg National Military Park, visitors will discover the USS Cairo, a recovered and rebuilt ironclad Union warship which was destroyed on the Yazoo River during the Civil War. The Cairo was commissioned in January 1862 and took part in several battles along the Lower Mississippi River. In December 1862, while operating on the Yazoo River, the Cairo was struck by two torpedoes and sank. The ship was rediscovered in the 1950s, with the remains loaded onto barges in the mid-1960s. Reassembly began at the Vicksburg National Military Park in the 1970s.

Building on its rich maritime history, Vicksburg continues to plot its course forward, embracing and capitalizing on its connection to the world by way of the Mississippi River.

For more information on the Port of Vicksburg, visit vicksburgusa.com.